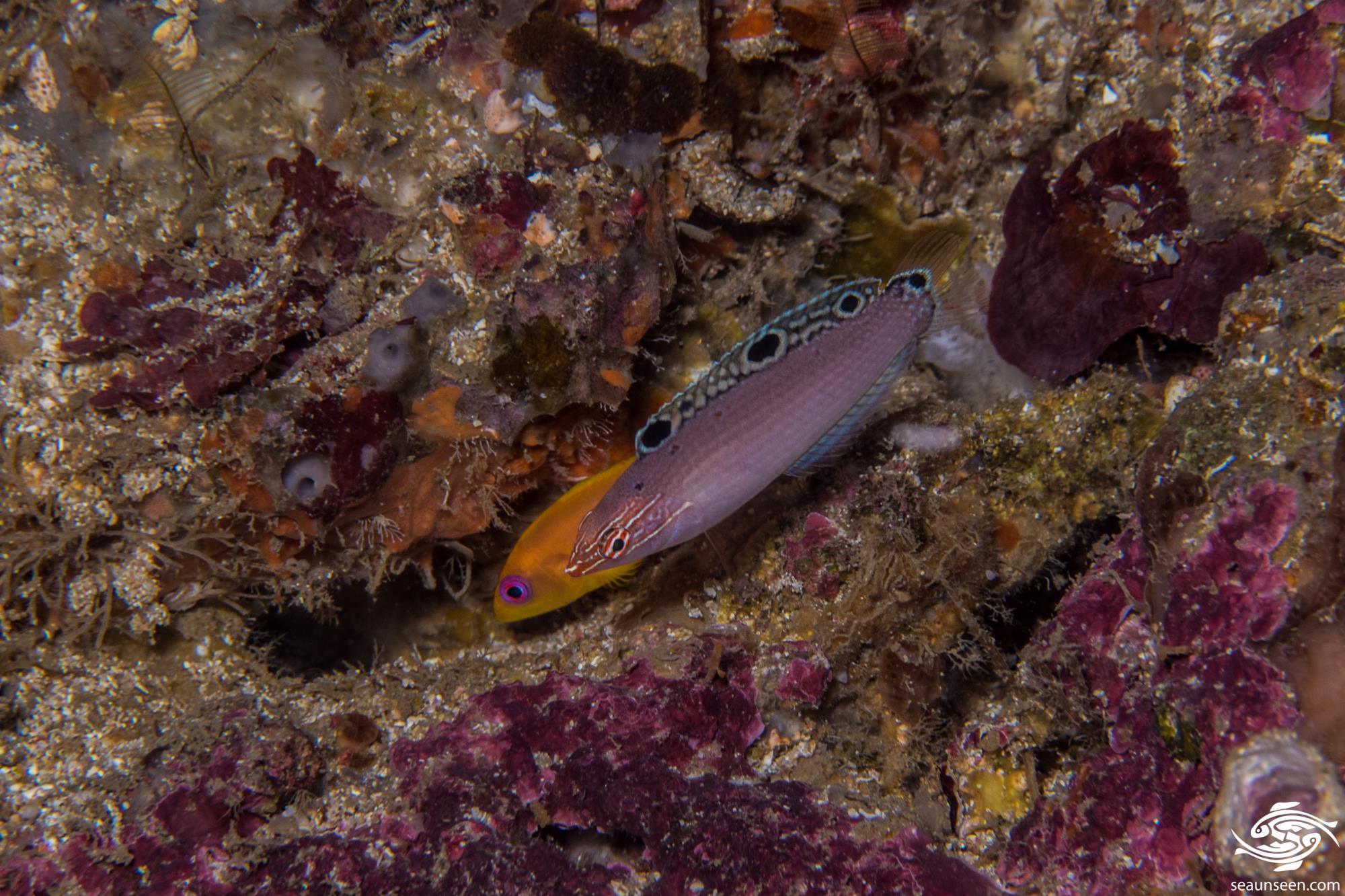 The Triplespot wrasse (Halichoeres trispilus) is also known as the  White wrasse. They are rarely seen in Tanzania and we have only seen them in one small cave on a wall at some 28 to 32 meters ( tide dependent).  They are relatively shy and are fast moving fish making them extremely difficult to photograph. At those depths one generally only has a few minutes to find one and photograph them. 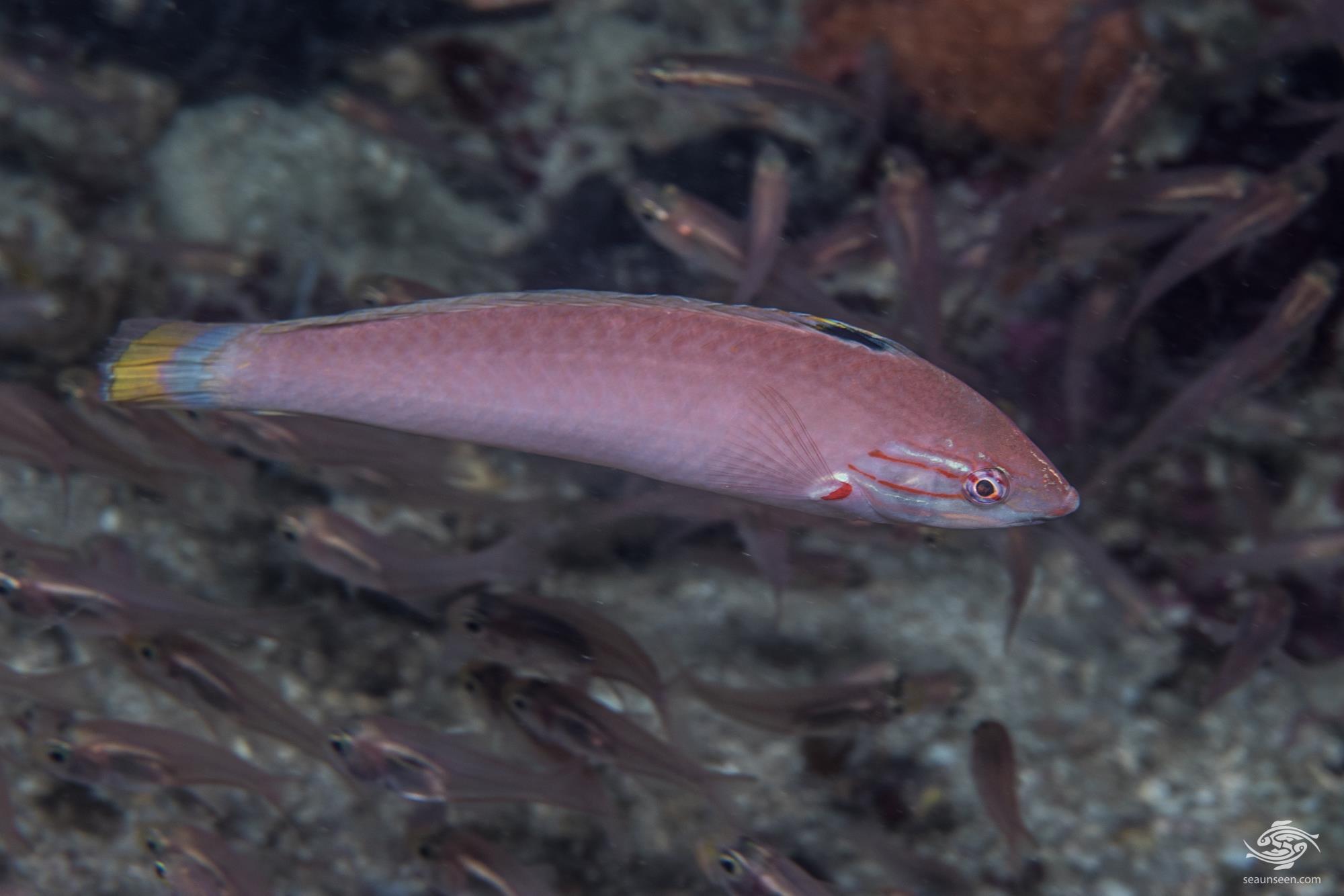 As with many wrasses the colouration changes from the adults to the juveniles. The  females  which are pictured below have a similar body shape to the terminal phase males ( pictured above) but the colouration is slightly different. The body is elongated with a proportionally small tail and in the females ( IP) it is transparent whereas in the males the tail is blue and yellow. Both have red lines below the eye.

The initial phase females have three prominent blotches on the dorsal fin , giving the fish their common name. In both sexes the body is a light pink color. They grow up to 9.5cm in length. 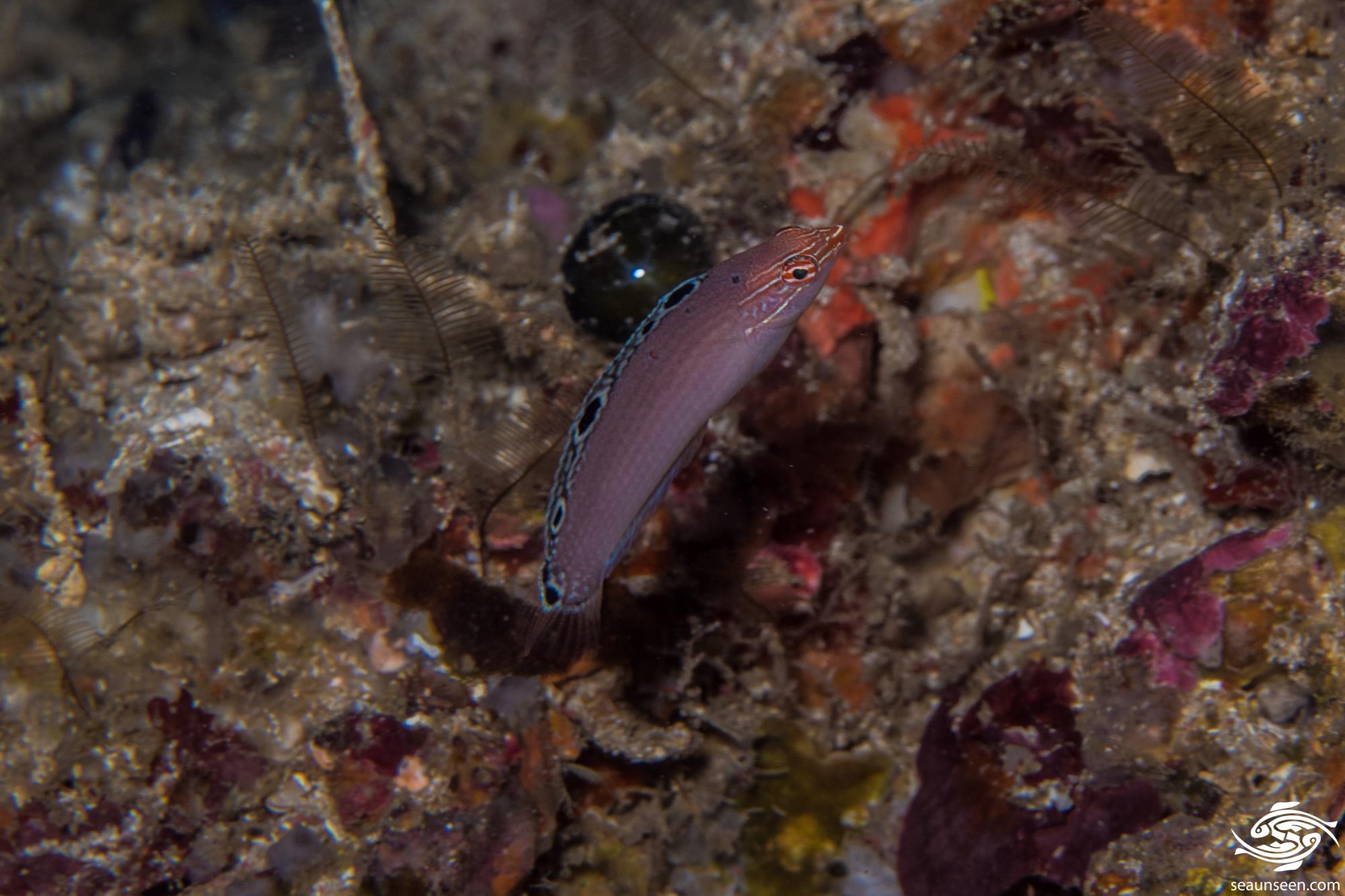 TRIPLESPOT WRASSE IN THE WILD

The Triplespot Wrasse are reportedly mainly found below 20 meters and seem to prefer living in small caves with a large amount of growth and a sandy bottom into which they can dive into and hide.  Generally these caves are filled with various species of Cardinals and Anthias along with a few predators such as Leaf fish, Scorpionfish and Lionfish.  The Triplespot wrasse is quick to swim into these shoals to hide making them exceptionally hard to photograph.

The Triplespot Wrasse is found across the West Indian Ocean and is known from South Africa , Mauritius  and the Maldives but undoubtedly has a wider range up the East African coast.  To our knowledge this is the first record in Tanzania.

The Triplespot Wrasse feed on small crustaceans which they scrape off corals and rocks.

The Triplespot Wrassel Wrasse is a Protogynous hermaphrodite, they first develop into females. Some specimens based on social cues transform into males. They are Oviparous, with the dominant male running a harem or at times several harems of females. Little is known of their breeding habits  but we see far more females than males.

Triplespot Wrasse  are not commonly kept in aquariums. They are only recommended for advanced aquarists as they are difficult to feed correctly. They require good hiding places, deep fine sand and plenty of water to swim in. These fish will almost certainly jump out a tank if given the chance. There is a good article here on them and the specimens from the Maldives appear to be slightly more pink than those in Tanzania.