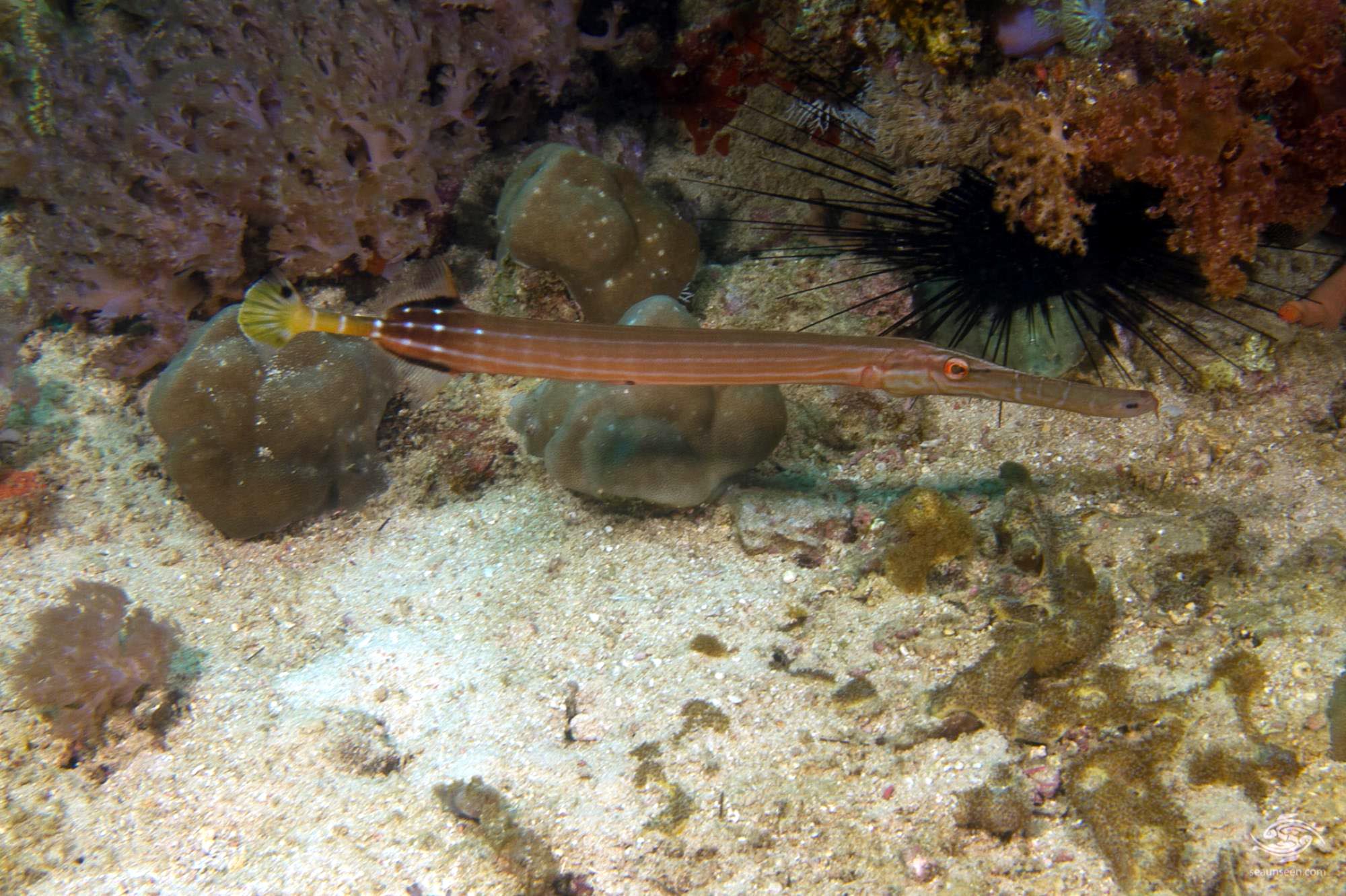 The Chinese trumpetfish (Aulostomus chinensis)  gets its name from its resemblance to a trumpet. They are strange looking fish that often swim vertically to blend in with their surroundings. They are related to seahorses and pipefish but are much larger.

The trumpetfish can be recognized by its long stick like body with a tubular snout and a chin barbel. Their coloration  is variable ranging from yellow, grey and reddish brown. They have the ability to change color to match their surroundings. The dorsal fin is split into two parts, with a set of small spines mid body and a second dorsal fin set back very far above the anal fin which it matches in size. The body shape and configuration of the tail give it a surprisingly fast acceleration from a standstill. They grow up to 80 cm in length. The mouth is very elastic and is opened to create a vacuum to suck in prey. Males have a specialized pouch used to carry the eggs after mating. 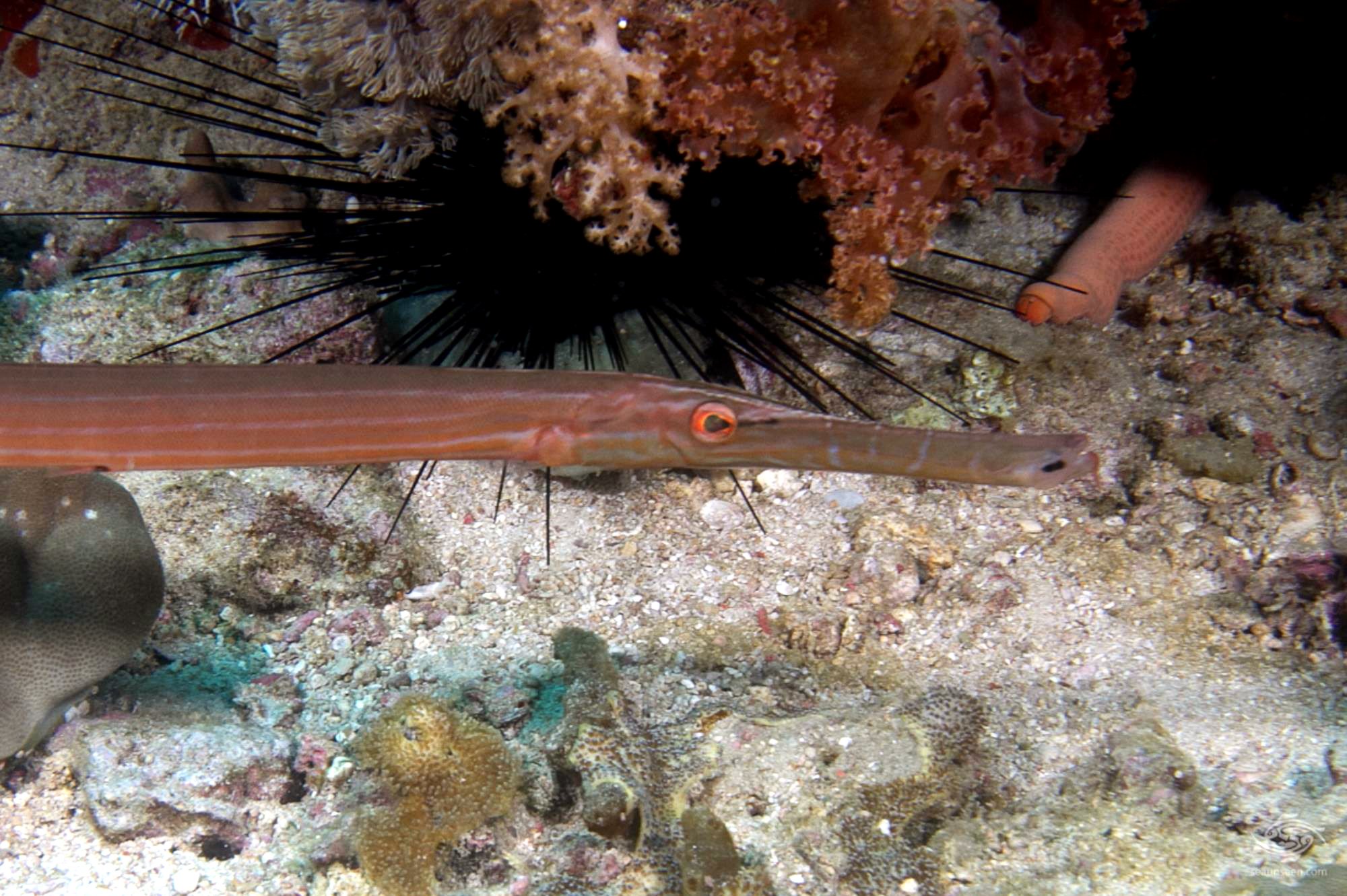 The trumpetfish is for the most part a very slow moving fish that floats virtually motionless for much of the time. It is possible to get within a few meters of them as they seem to trust their camouflage, but they will quickly accelerate off if one gets too close. They blend in very well with the surroundings by modifying their colors. The juvenile trumpet fish resemble pipefish when small and have a brown background color with grey or white bands. They have the ability to lighten or darken their colors to blend in with the background. 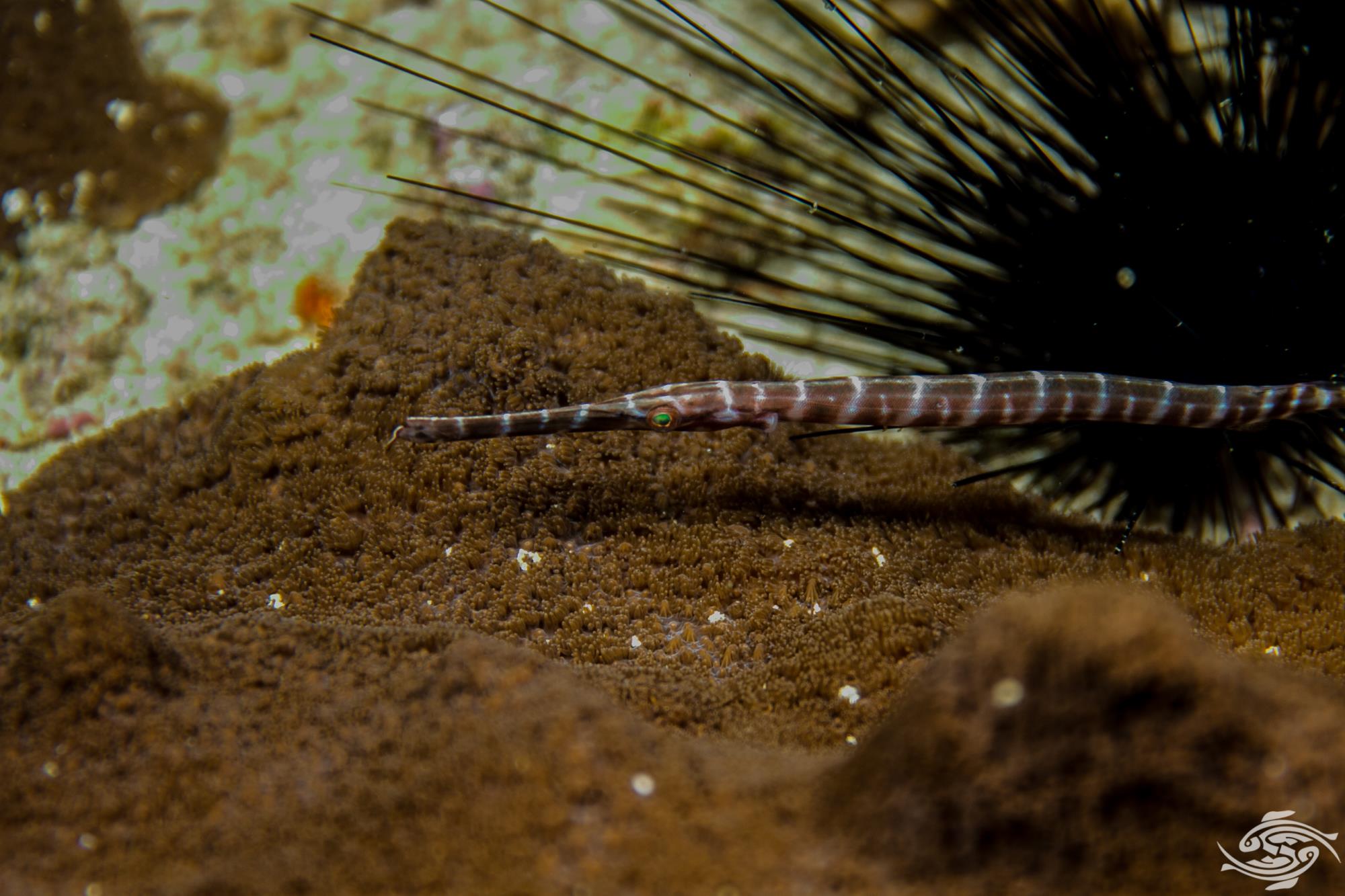 They are ambush predators that are usually solitary and hunt during the day. Once they have moved within a meter or so from their prey they make a rapid lunge and seize it, swallowing it whole. The acceleration in the lunge is impressive. They also have another hunting technique, which is to shadow larger herbivorous fish or even turtles, which are not normally seen as a threat by smaller fishes. In so doing they manage to get close enough to the smaller fishes to lunge at them. They have a sensory organ on the end of the mouth as can be seen in the image below. The purpose of this organ seems to be unknown but in all probability it relates to sensing prey. 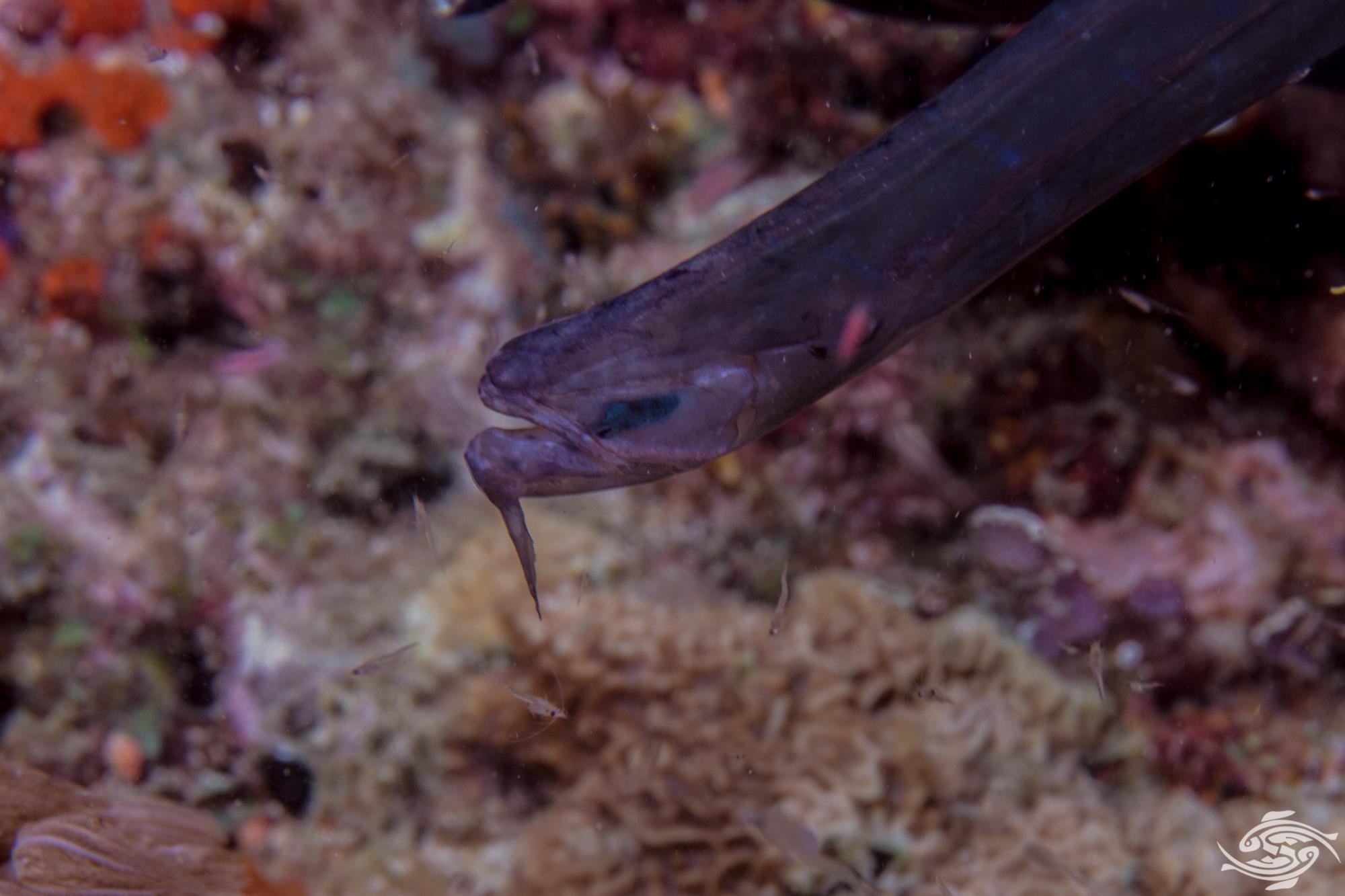 There are several species of trumpetfish across the oceans. Aulostomus chinensis is found in tropical and subtropical waters in the Indian and Pacific oceans. They are found on coral and rocky reefs from 1 meter to 120 meters. They are more often than not found around features with large shoals of fish on them. 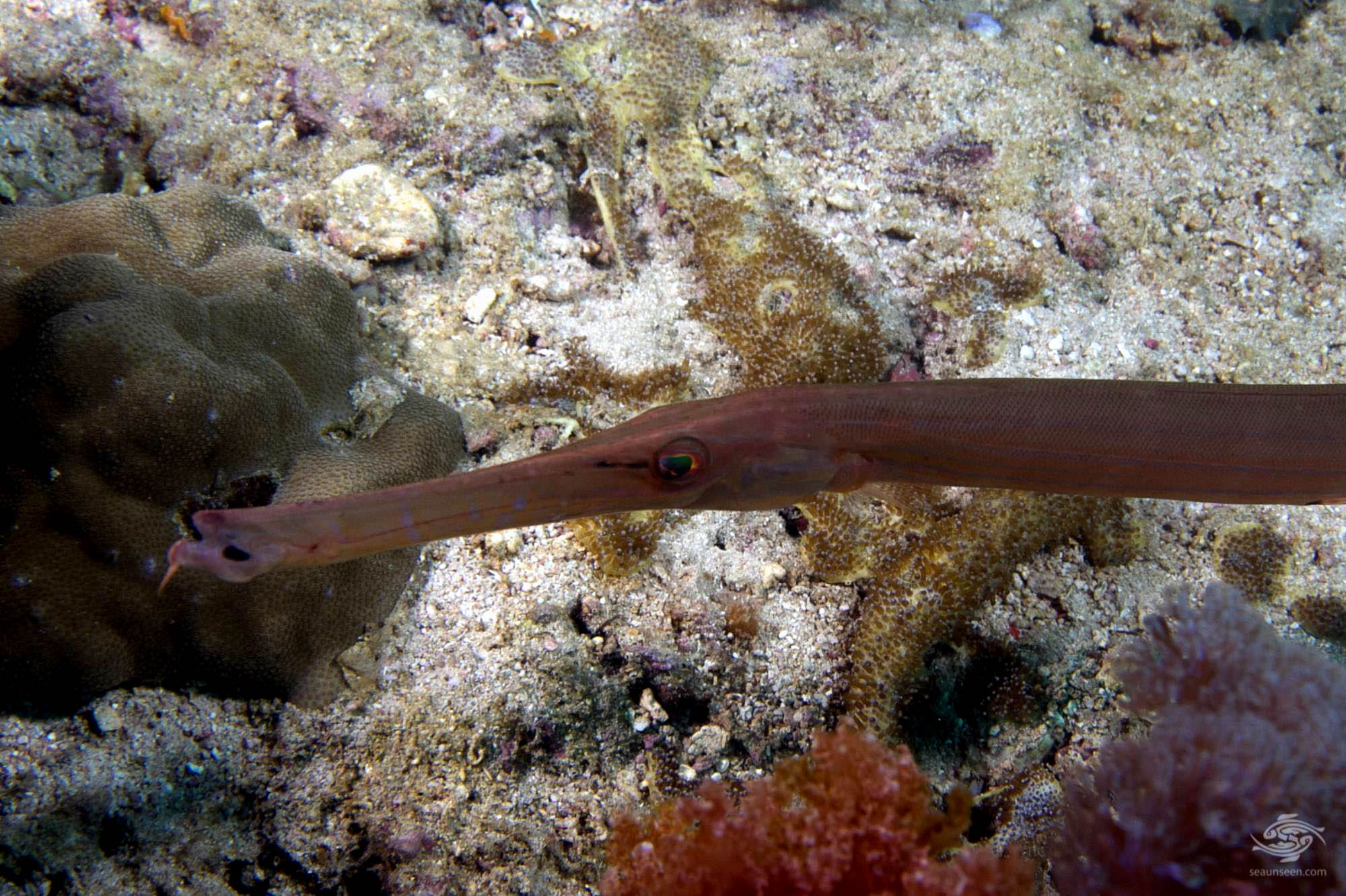 Trumpetfish are voracious predators of small fish and crustaceans. Because their mouths are relatively small this limits the size of their prey. 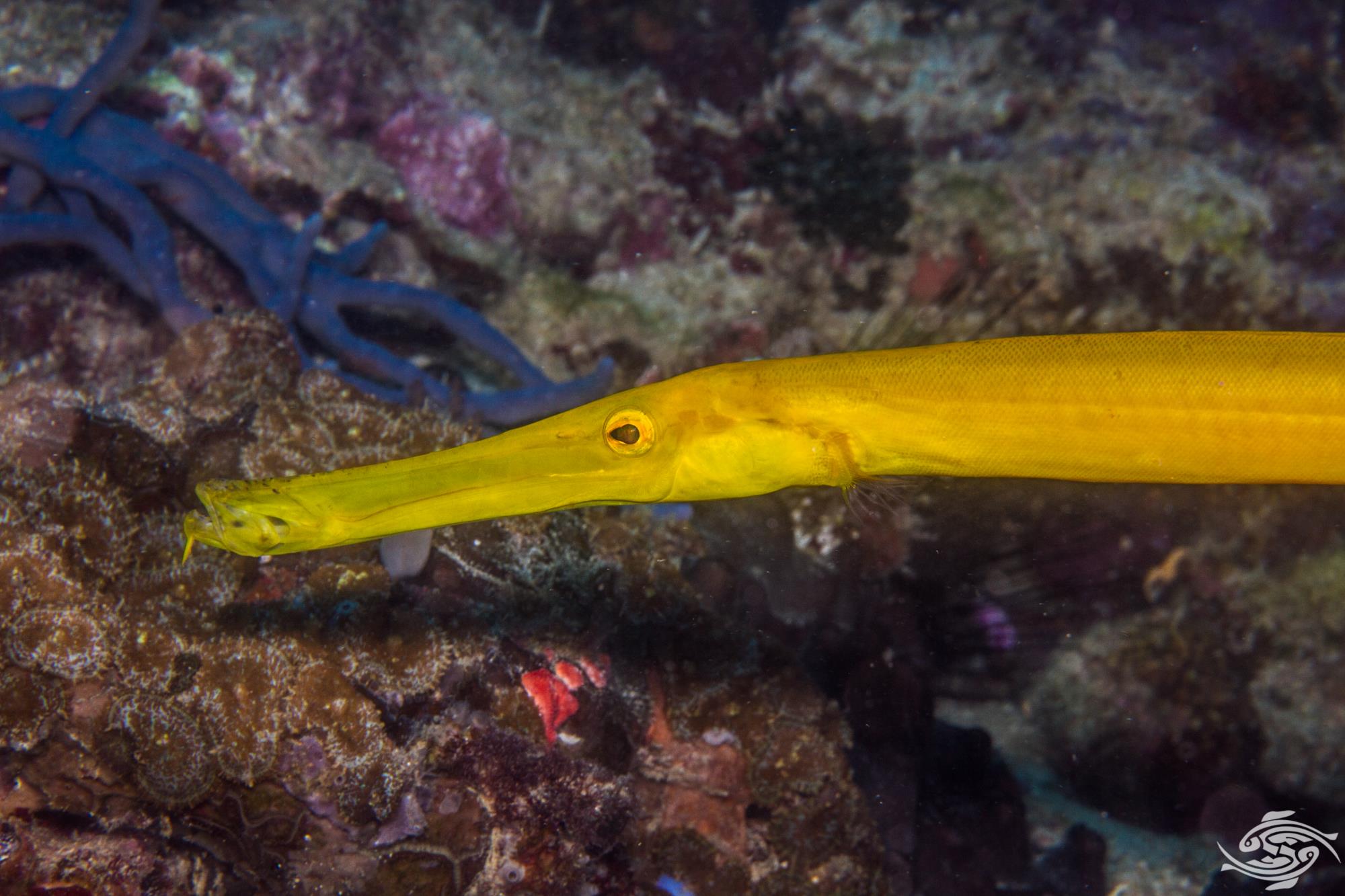 They have similar mating habits to seahorses. After an elaborate dance the female transfers the eggs to the male who carries them in a specialized pouch until they hatch. 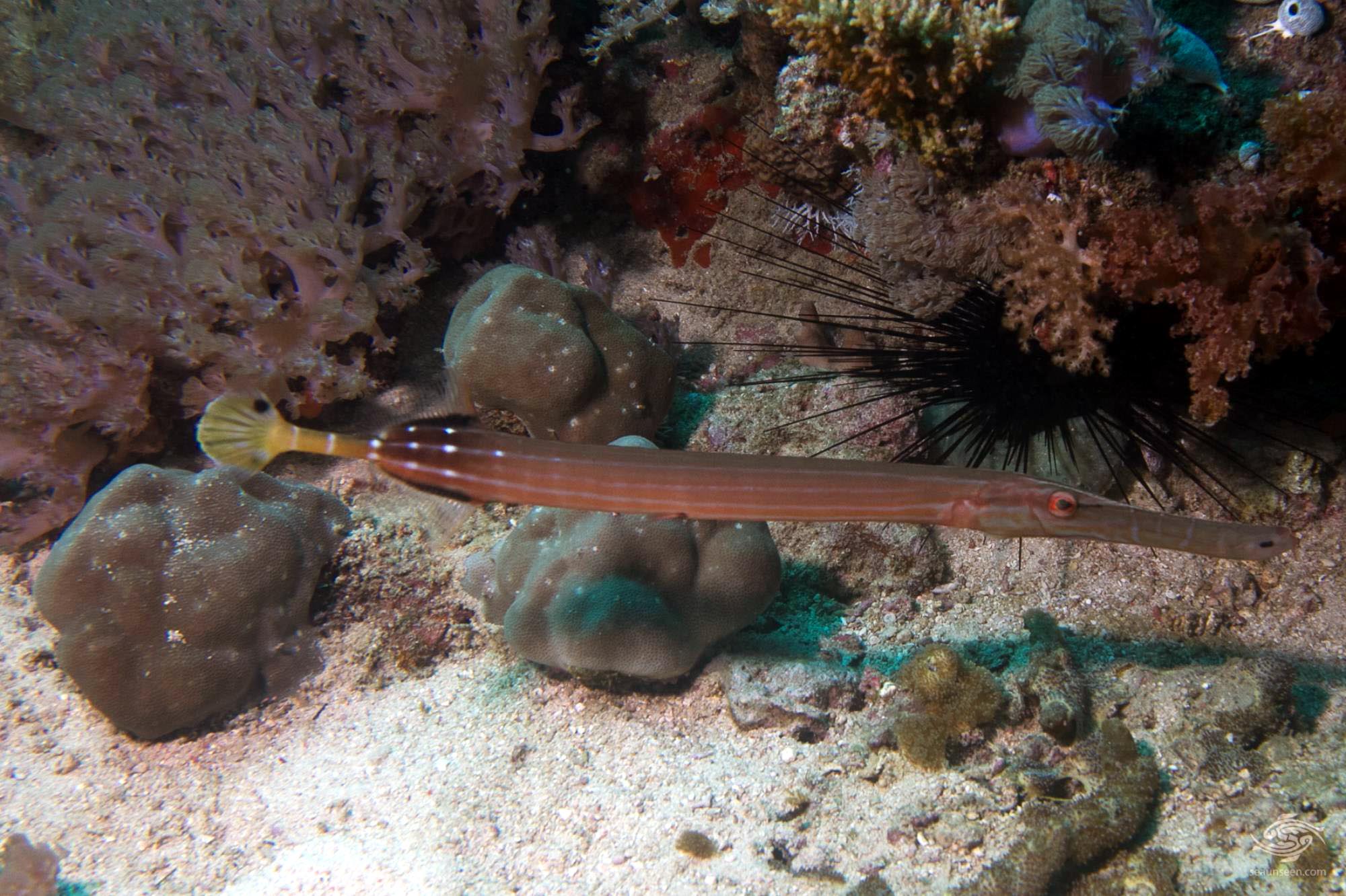 Due to their size and predatory nature they are generally only kept in public aquariums. 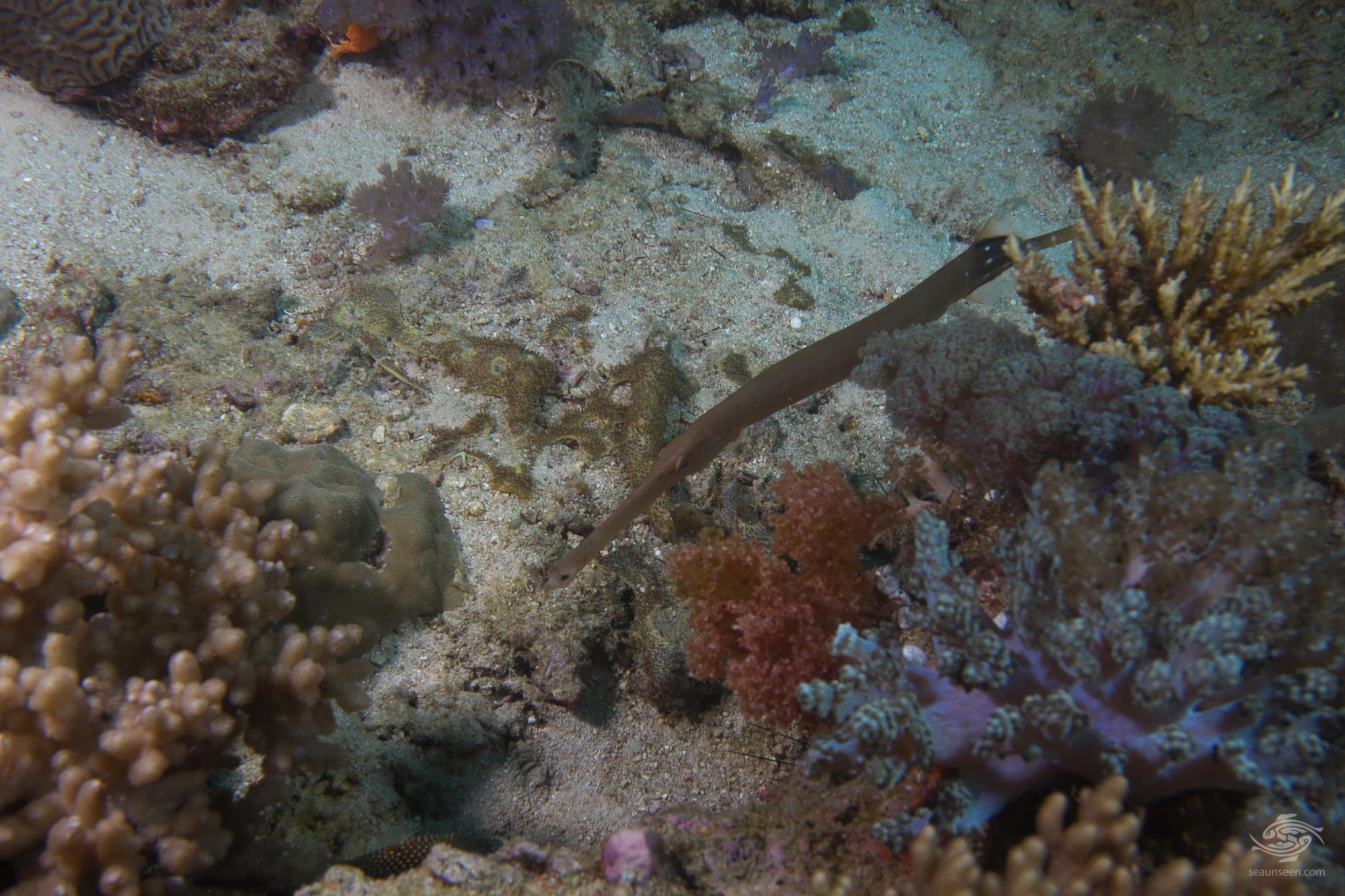 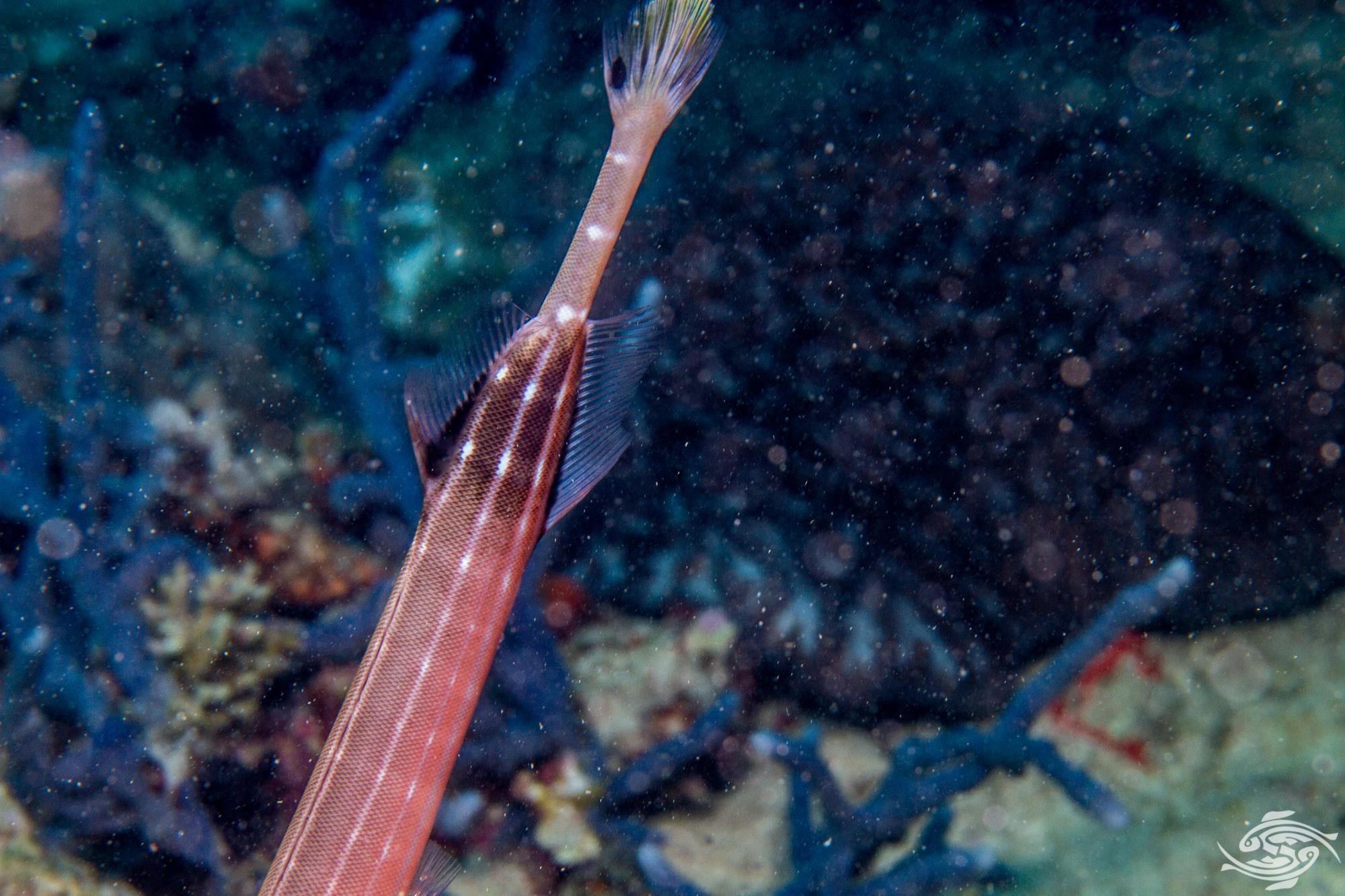 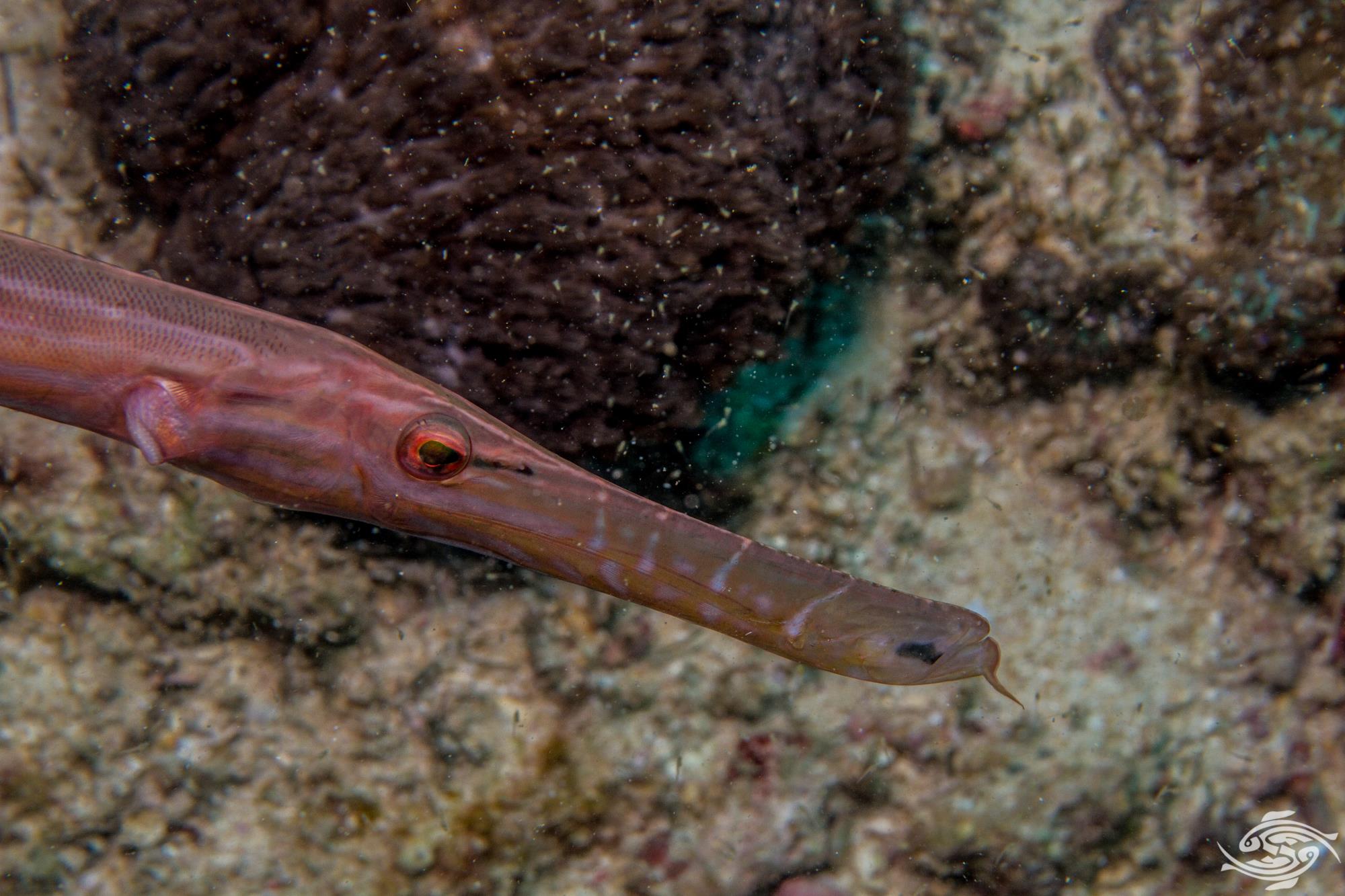