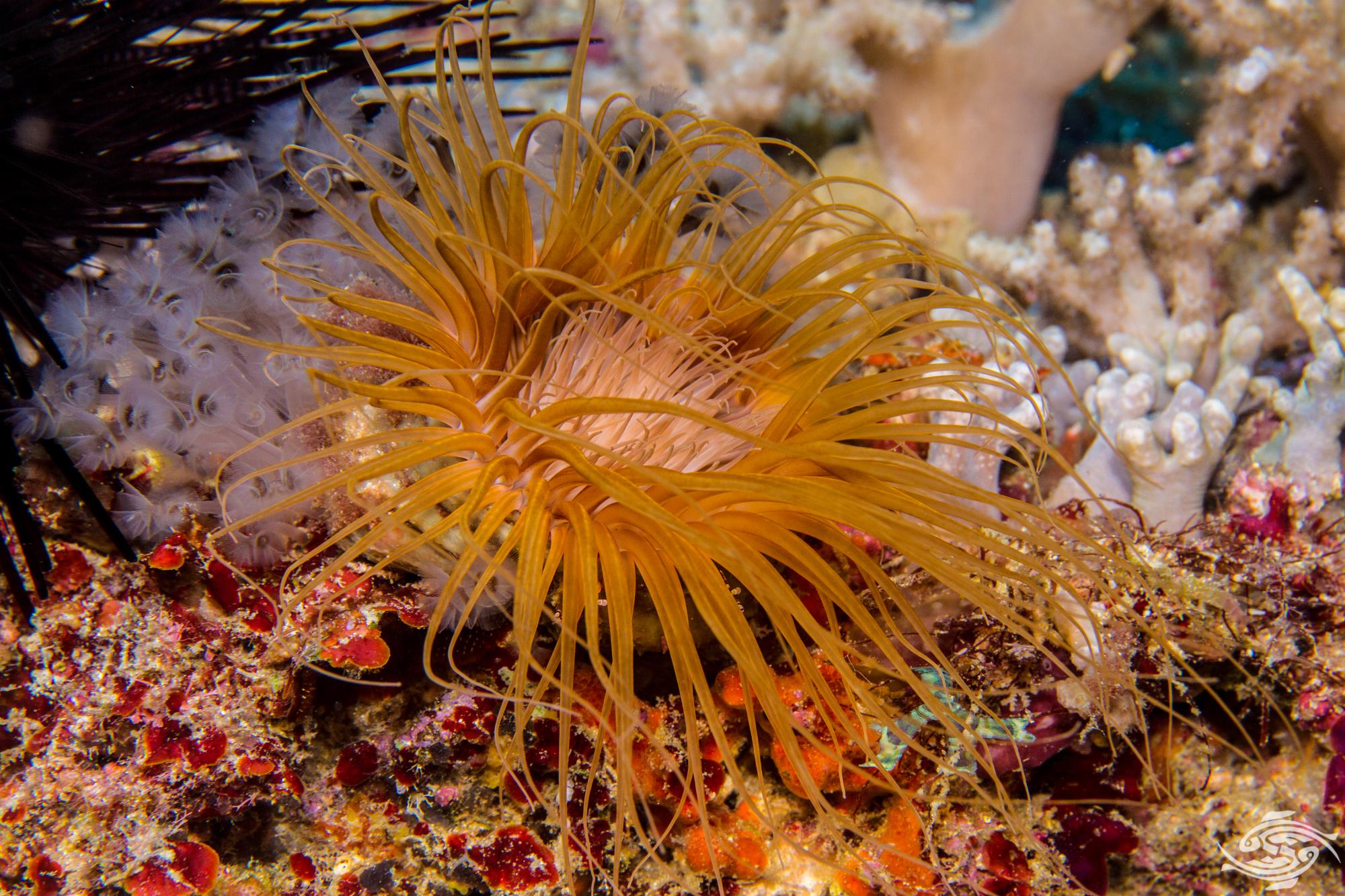 Tube Anemone’s are not anemones per se and are somewhere in-between anemones and corals. They are in the sub class Ceriantharia and live inside long tubes which go into the substrate.  In Tanzanian waters they are found across a wide range of habitats and depths.

Some species seem to prefer being amongst soft corals and sponges as can be seen in the images. Others seem to prefer being on sandy bottoms with the tube buried in the sand. There is one thing in common between these different locations, they are always in areas of fairly strong current or tidal movement. Some specimens are extremely colorful and when fully extended are really beautiful. 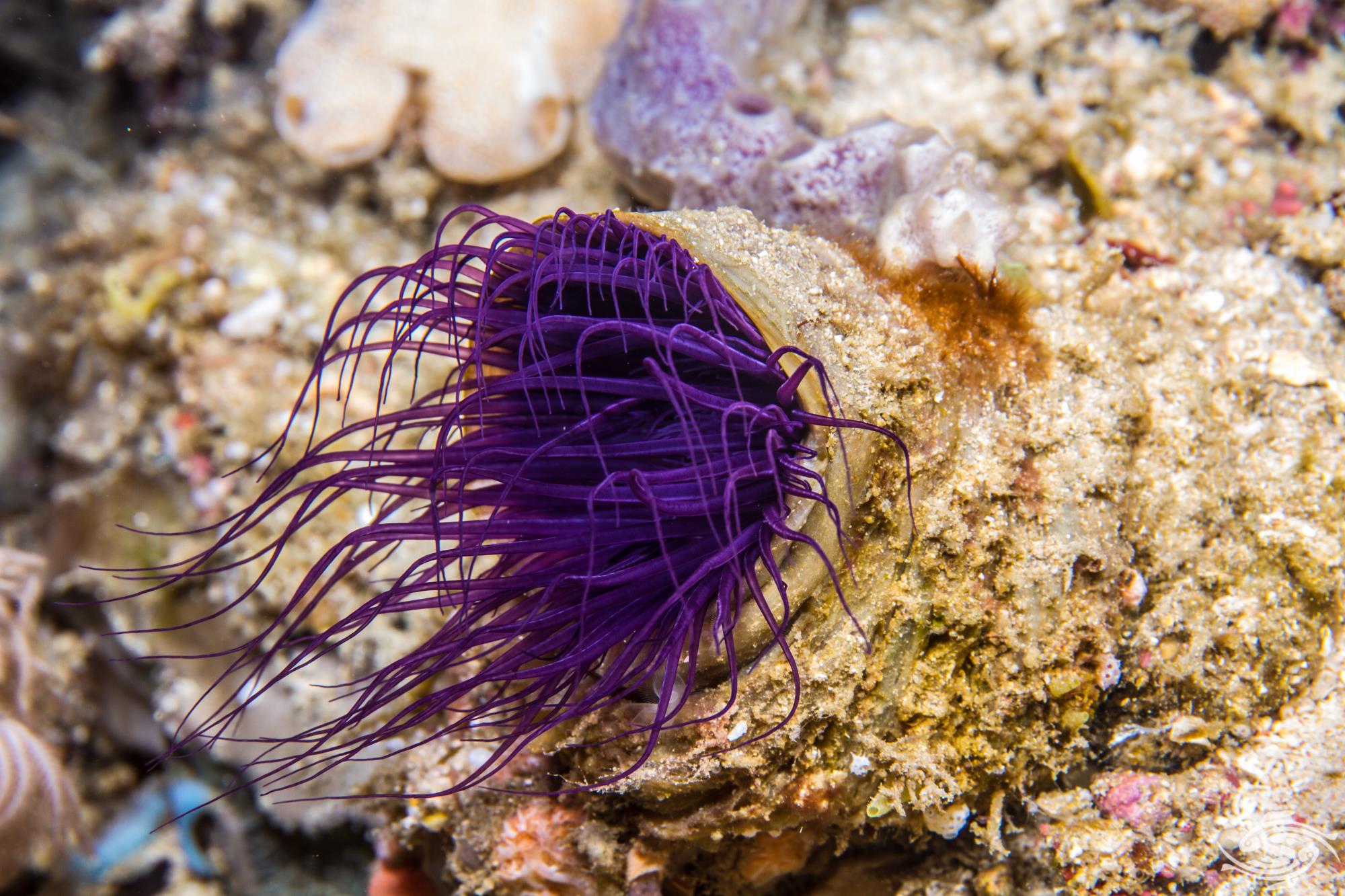 Unlike most anemones which form symbiotic relationships with zooxanthellae to indirectly obtain nutrients from photosynthesis, Tube Anemone are not documented to do this. 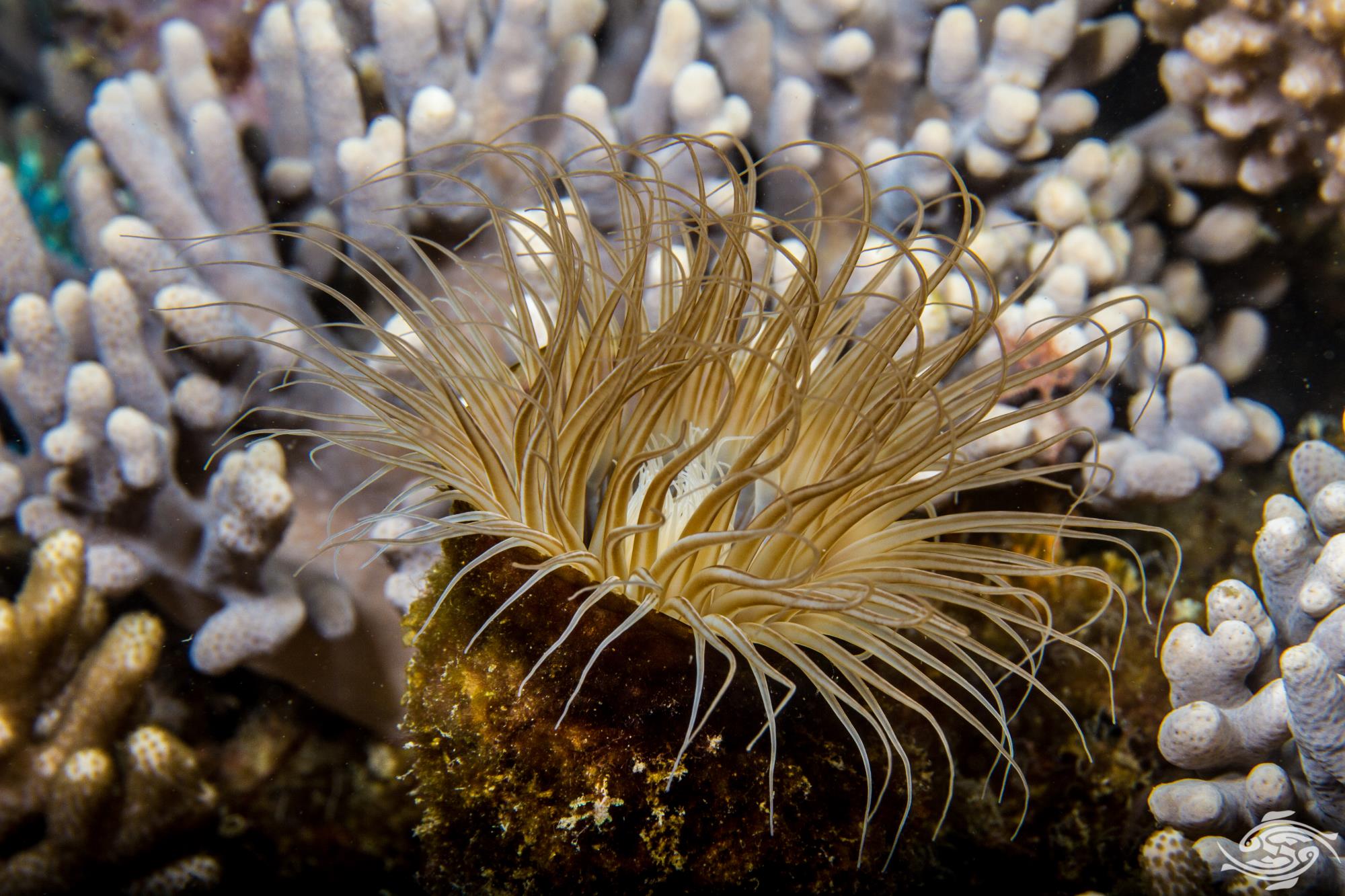 The Tube anemone differs from other anemones in that they have two sets of tentacles. The outer set of tentacles are used to capture prey as can be seen in the images lower down in the post. The inner set around the mouth are used to pass food into the mouth.  The tentacles themselves are not retractable, but the entire anemone is capable of retracting into its tube. 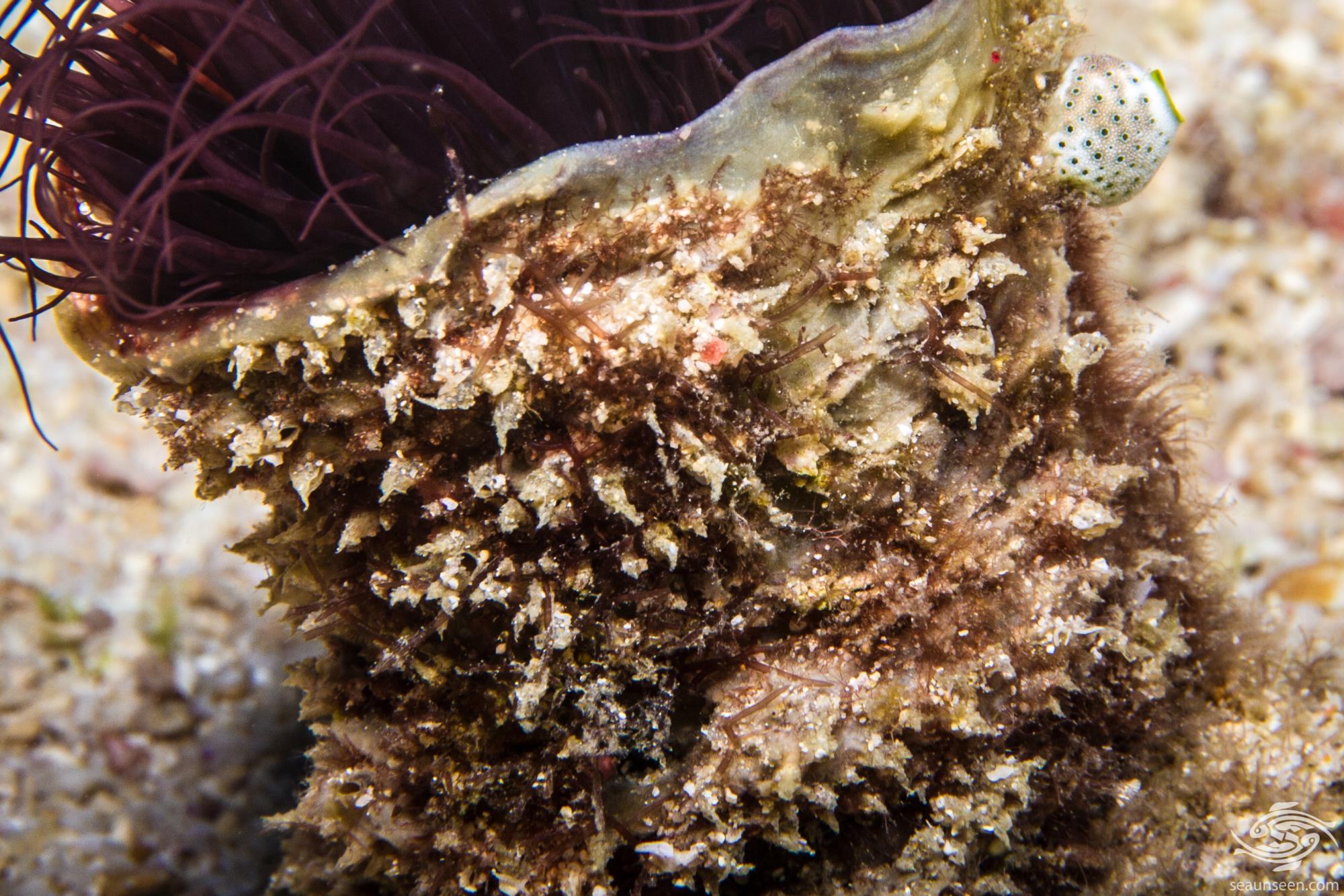 The tube which in some locations with some species protrudes above the substrate is made of a tough leathery substance. The tube is made from the secretions of stinging cells in the anemone. There are often many different organisms growing on the tube as can be seen above which aid in camouflaging it. The inner tentacles can be seen in the image below. 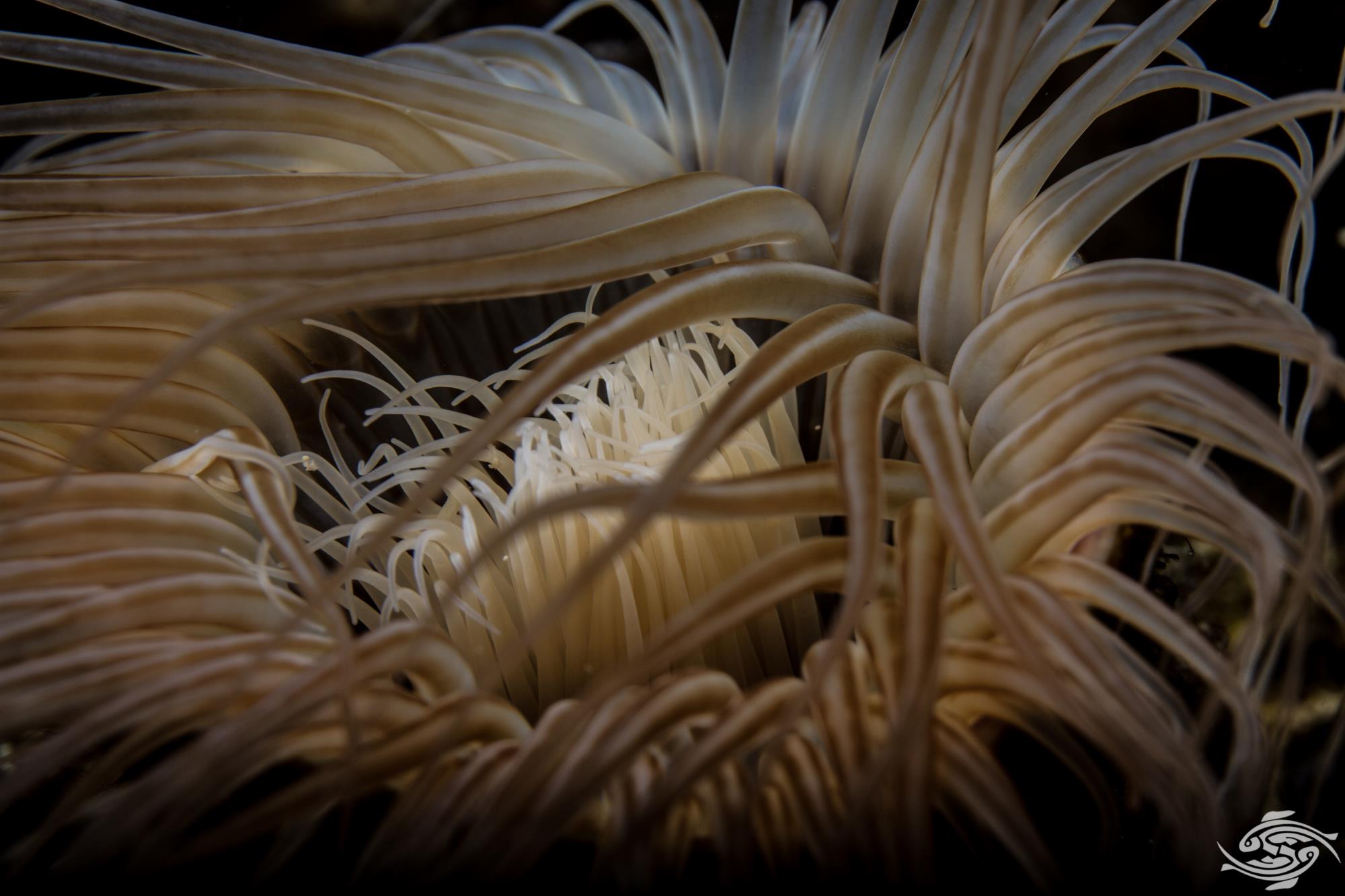 There are almost certainly several different species of Tube Anemone in the images in this post. The ones that are found on walls and in areas of strong current among soft corals and sponges are open during the day and at night. There appear to be two basic shapes that these anemones have. One  has long thin tentacles ( such as the orange one in the top image) and others have banded tentacles such as in the images below. Both are extremely sensitive to being approached and one has to approach them very slowly. A fast approach will cause them to disappear down their tube very quickly.

The Tube anemone that are found in the sandy areas with high tidal movement are also usually open during the day and at night. Again anything but a very slow approach either at night or during the day and they will disappear. The anemones that live in soft substrates usually put one set of tentacles out along the sand and have others moving freely in the water table.  A very slow approach at night with the lights on them does not cause them to retract, if anything the lights attract small fishes and crustaceans and the anemones feed on them. This can be seen in the images below and I have some video clips if anyone is interested. Their stings must be very powerful because the fish are immobilized immediately. 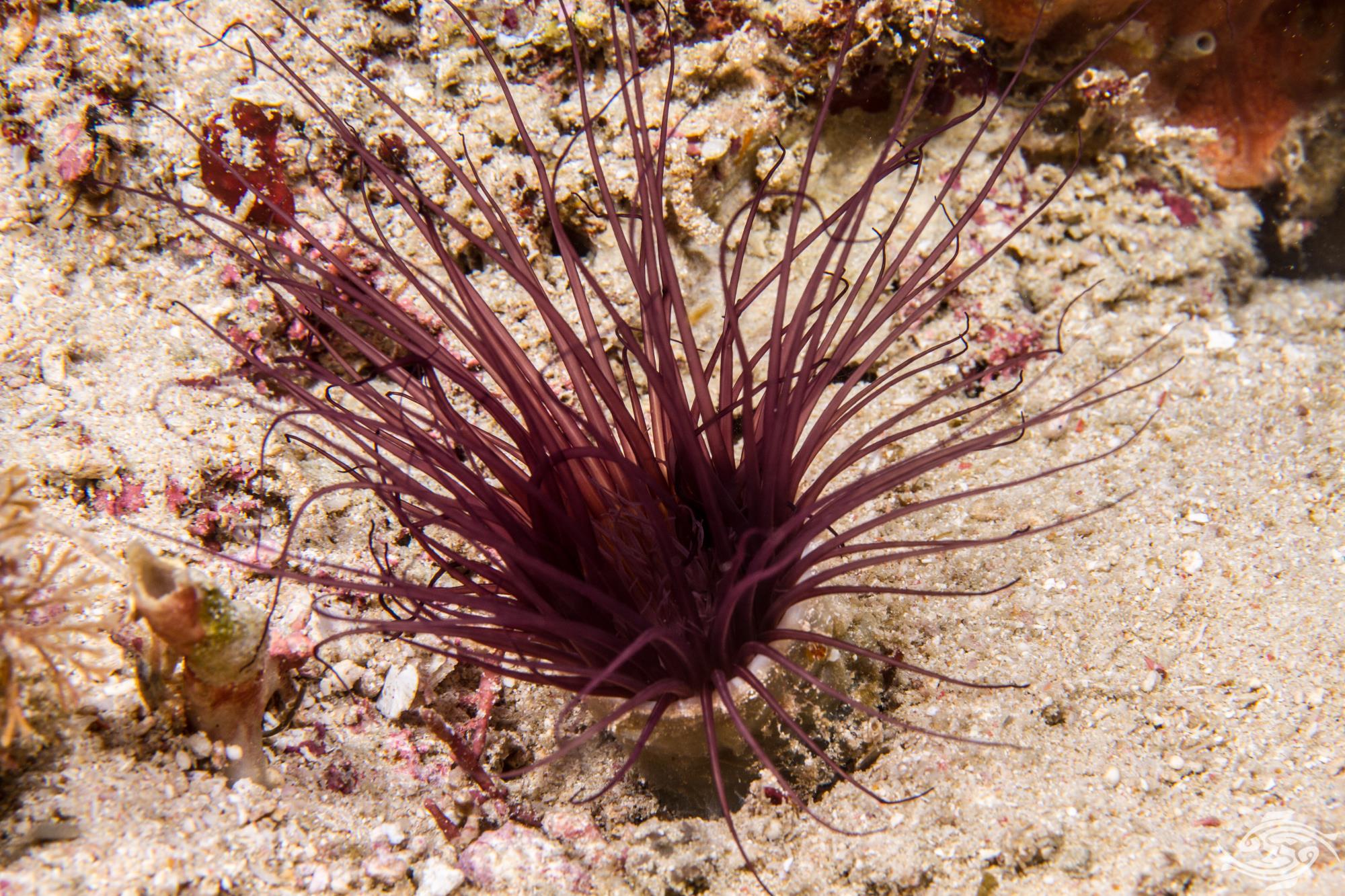 One does not normally see associations between the Pacific Clown Anemone Shrimp (Periclimenes brevicarpalis) and Tube anemones, however on one occasion we found a Tube Anemone in a rubble area with a very large Anemone Shrimp under it, but we are uncertain of the species. It is the largest Anemone shrimp that we have ever seen. 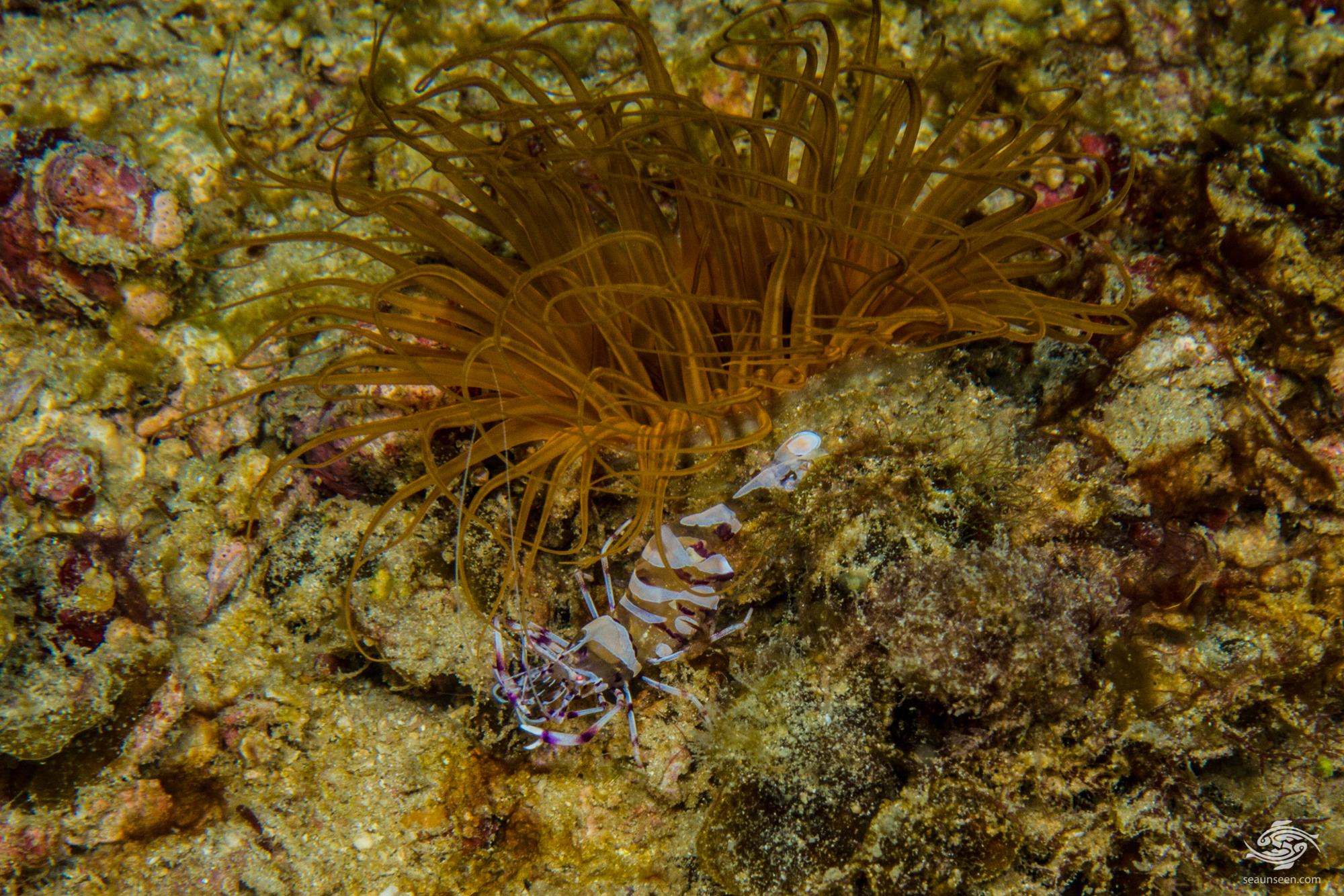 As can be seen in the image below this shrimp was very large being around 55mm. We have never seen this association before. 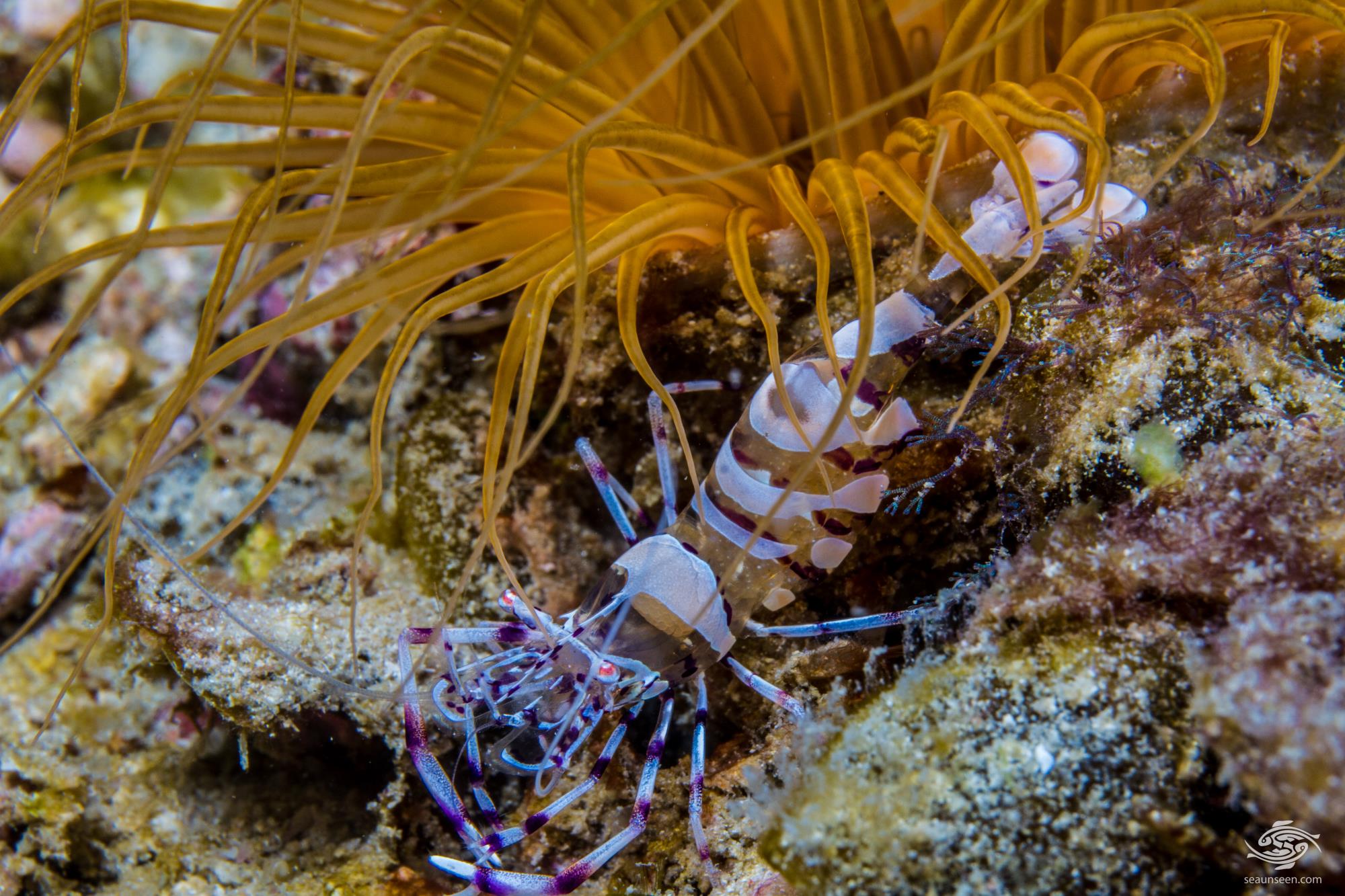 There are at least 25 species of Tube anemones found around the worlds oceans. In Tanzanian waters they have been seen from 4 meters to close to 30 meters in depth. 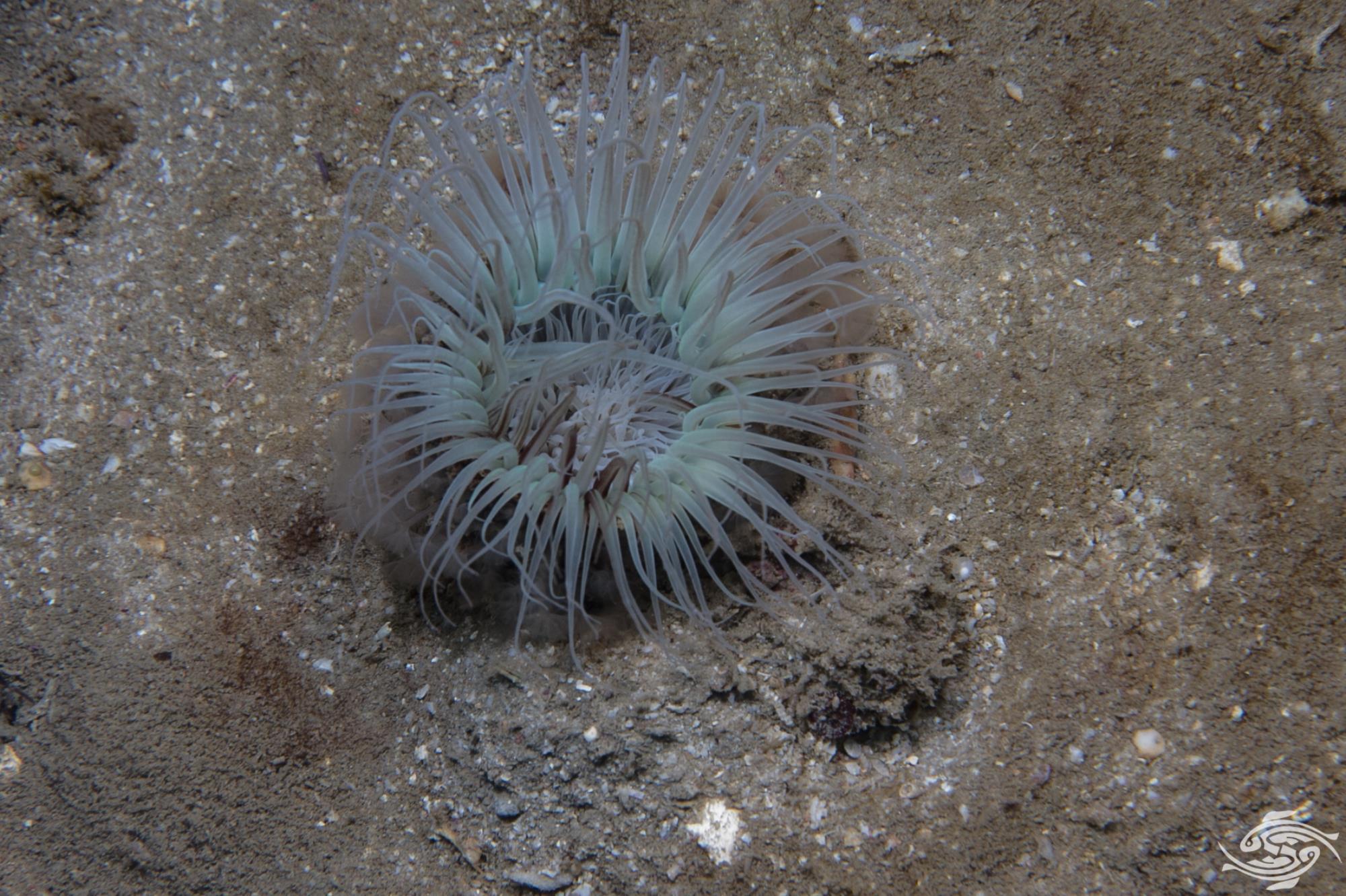 If one sits and watches the Tube anemone for awhile, their tentacles will pull small particles out the water table and will move it down to the smaller tentacles around the mouth area.

In Tanzanian waters often while diving at night there are large numbers of Sardinella sirm and Sardinella gibbosa who are attracted to the dive lights. At times one is forced to turn off ones lights as these fish swim into one with quite some force. When attempting to photograph Tube Anemones these fish often swim into the anemones who are quick to seize and sting these fish. This is probably not a natural feed but the stings of the Tube Anemone are powerful as they immobilize the fish instantly. This can be seen in the images below. 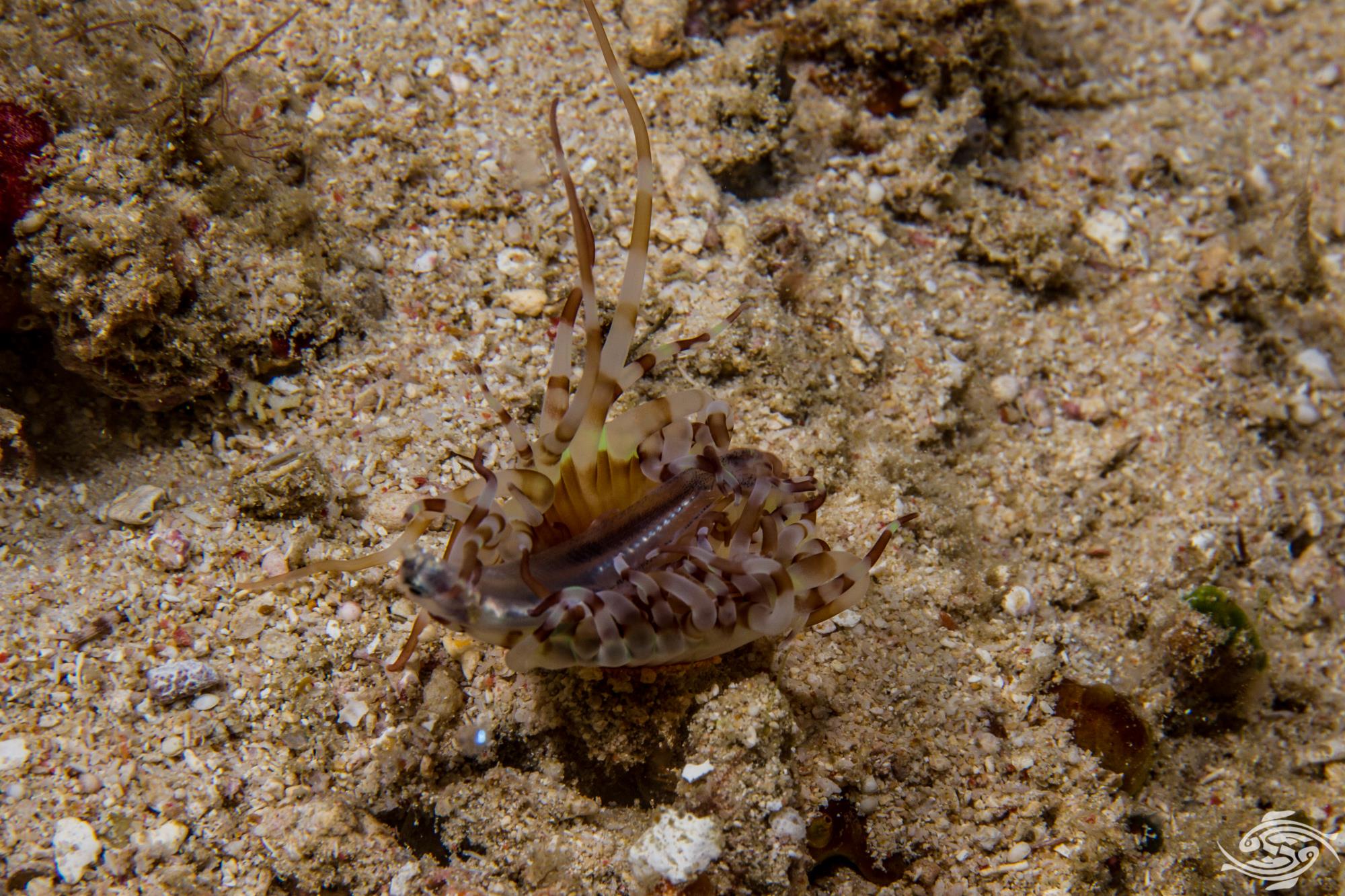 The image below was taken approximately two seconds after the image above. 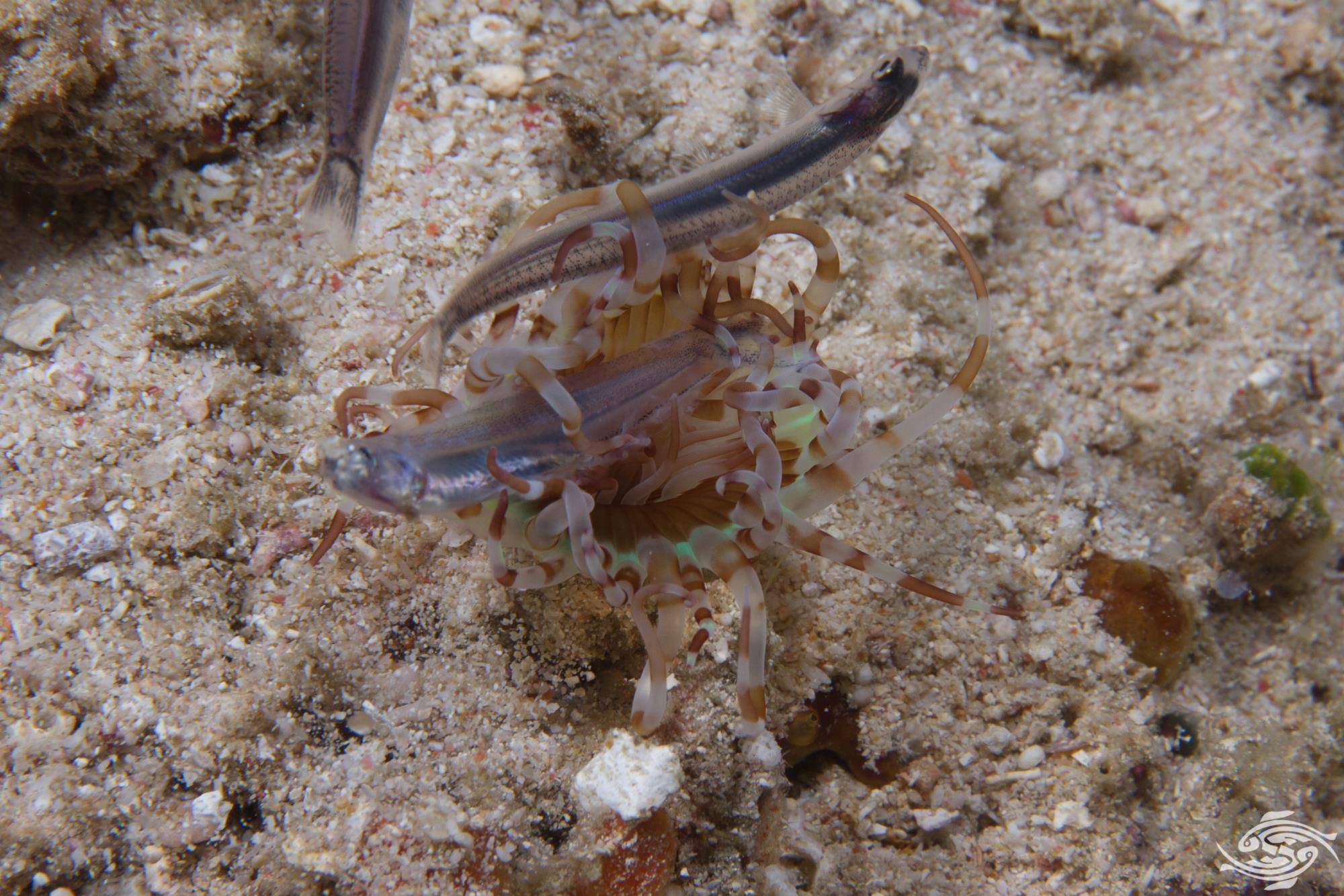 Tube anemone do not seem to form symbiotic relations with zooxanthellae as other anemones do and therefore must obtain most of their food from the water table which explains why they have such powerful stings. In all probability most of their food comprises of small zooplankton but this is speculation.Some species of nudibranch specialize in preying on tube anemones. 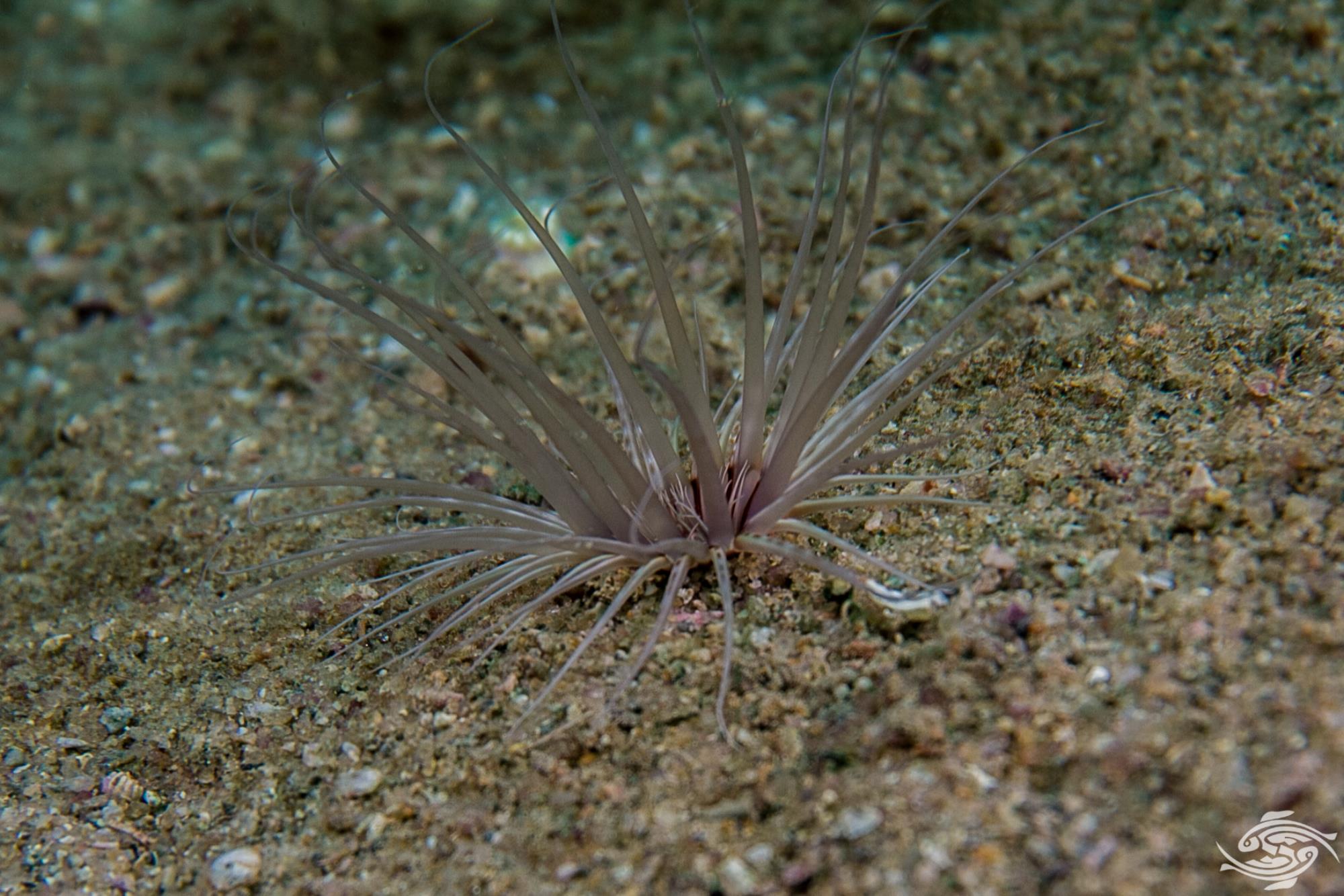 Some aquarists keep Tube Anemone in their tanks and they make an extremely beautiful feature in the right type of tank. It is unlikely that most fish will swim into these anemones, but if they do it will be fatal. 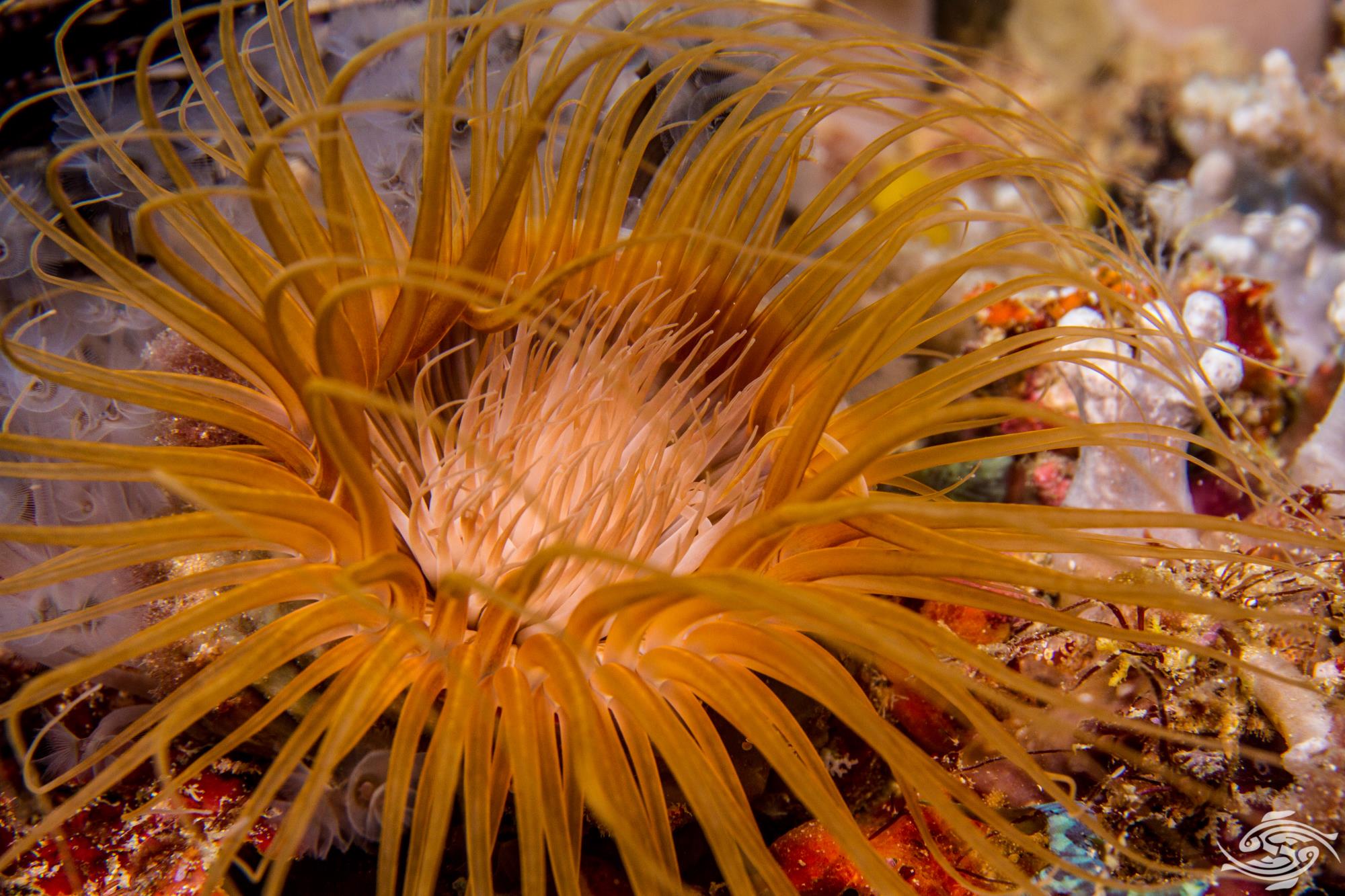 Although some species of anemone move around an aquarium, Tube Anemones are unable to move in the same fashion as other anemones making it easier to place them exactly where one wants to. 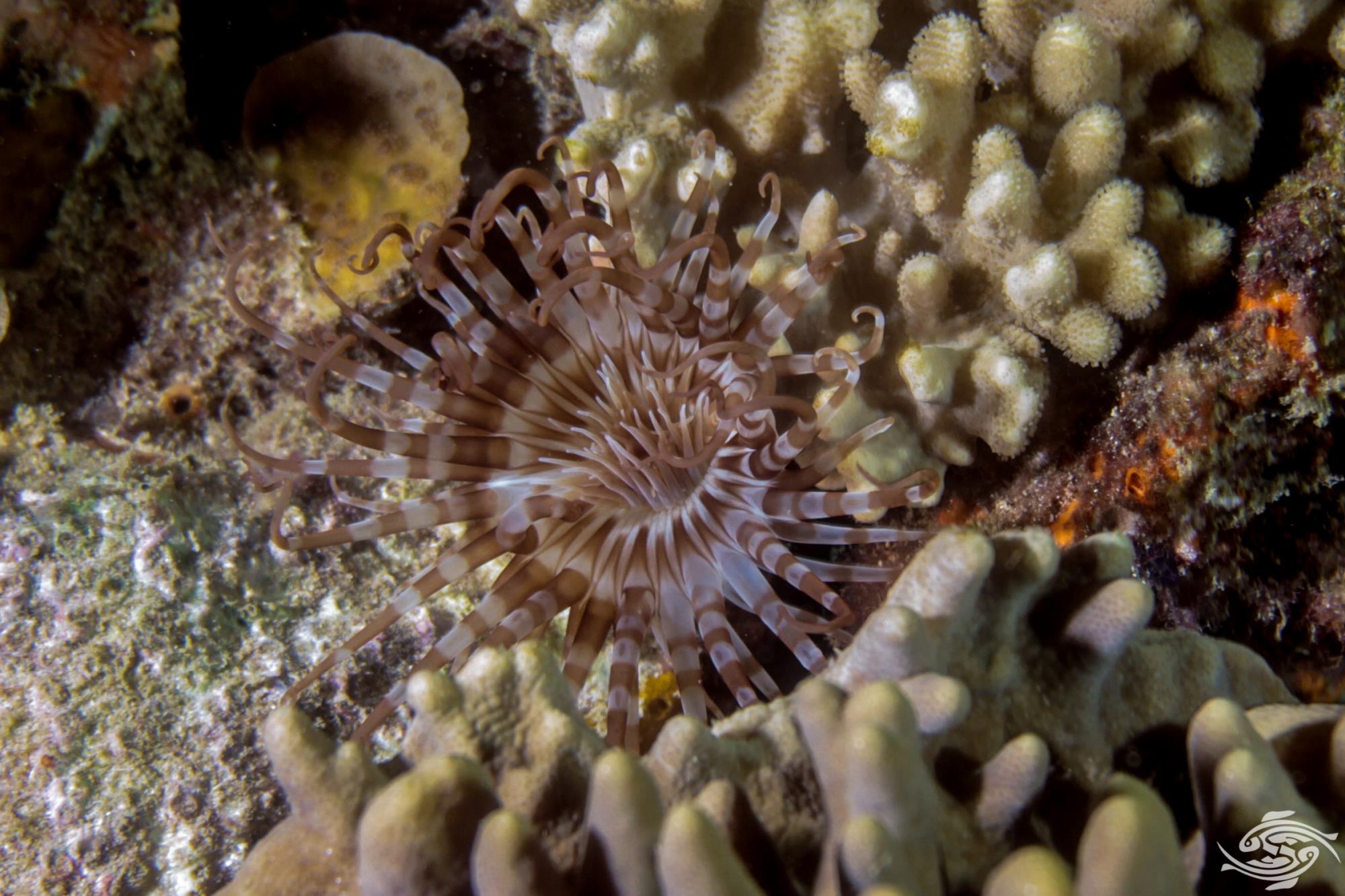 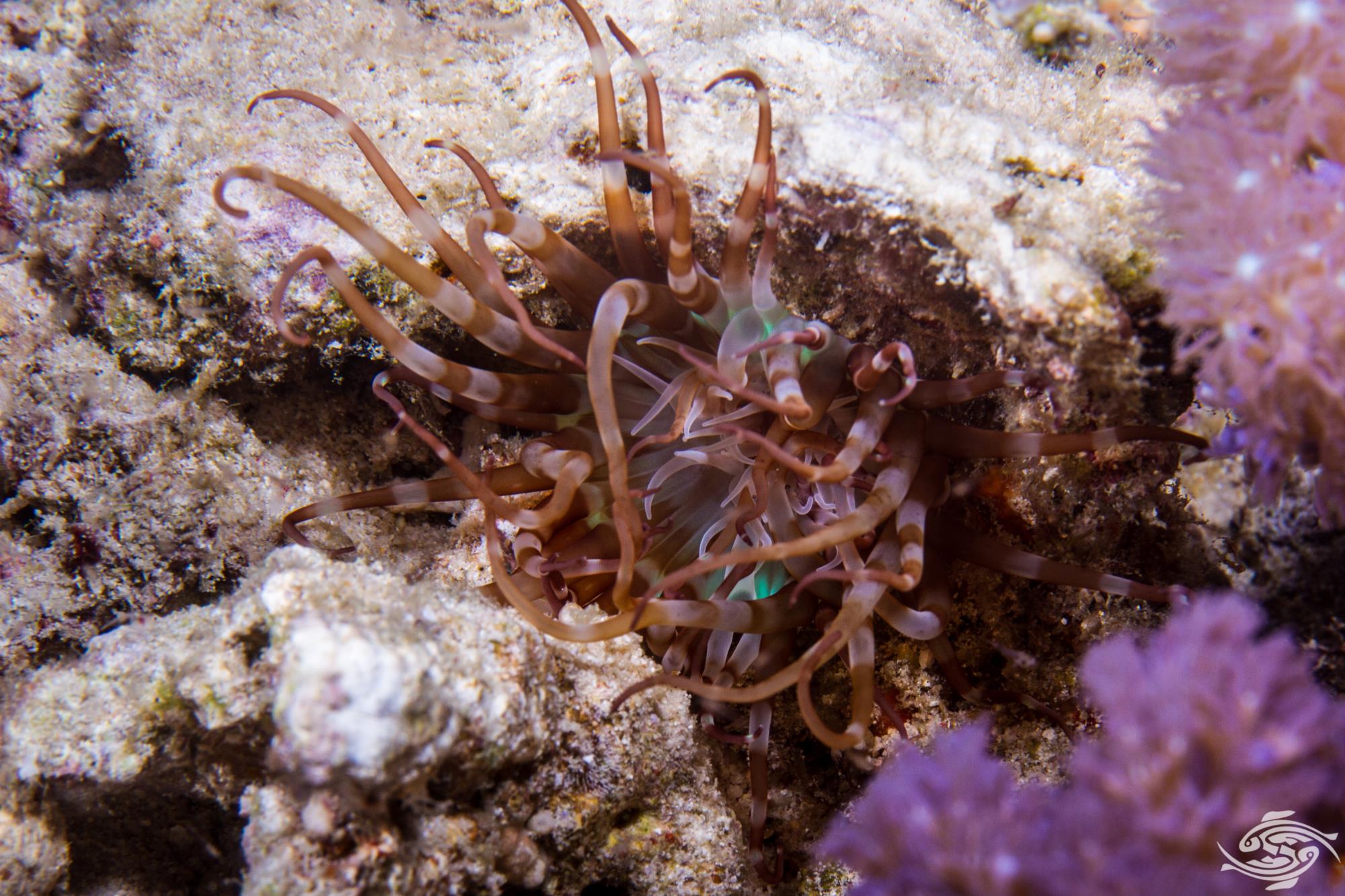 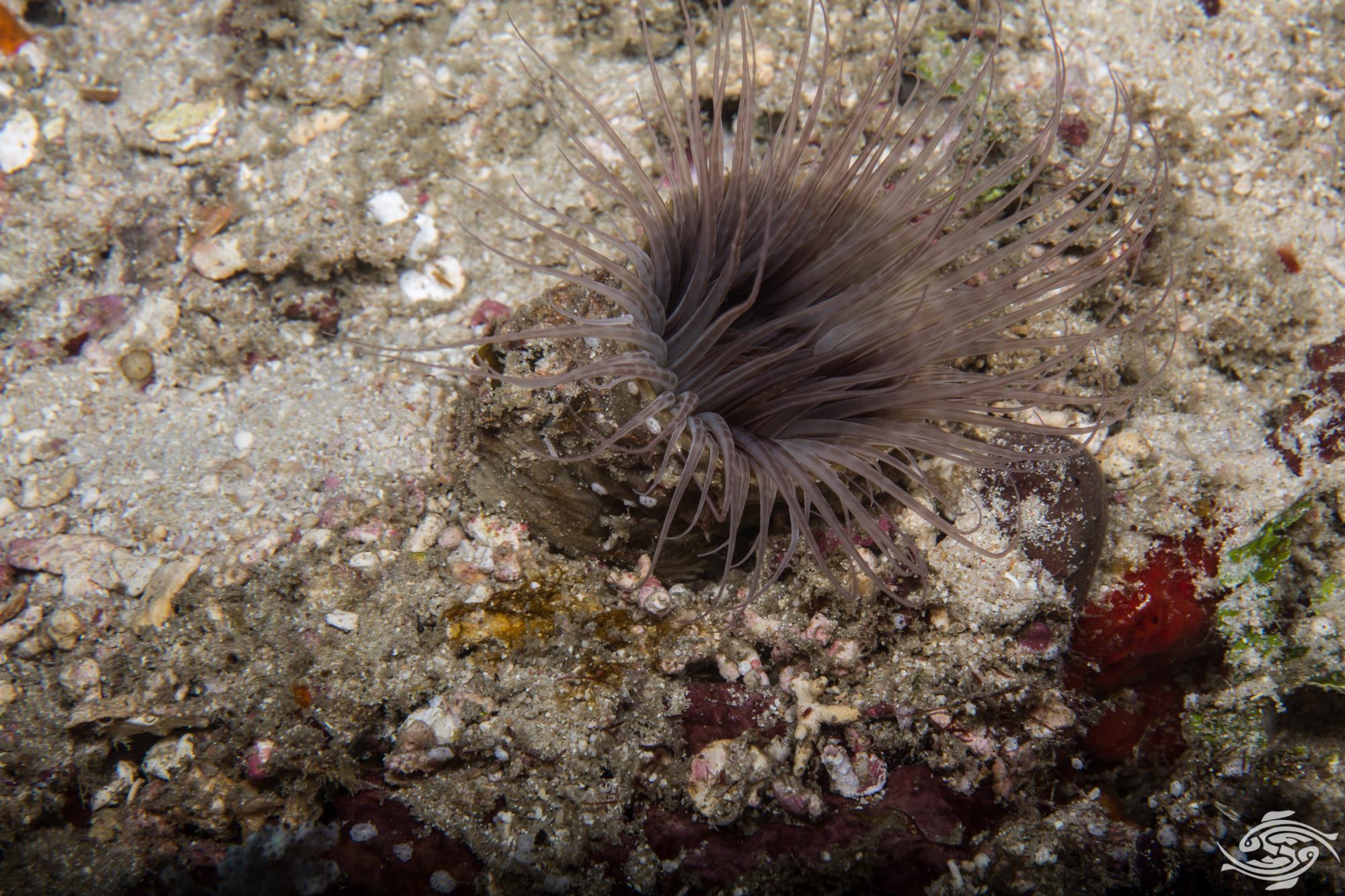