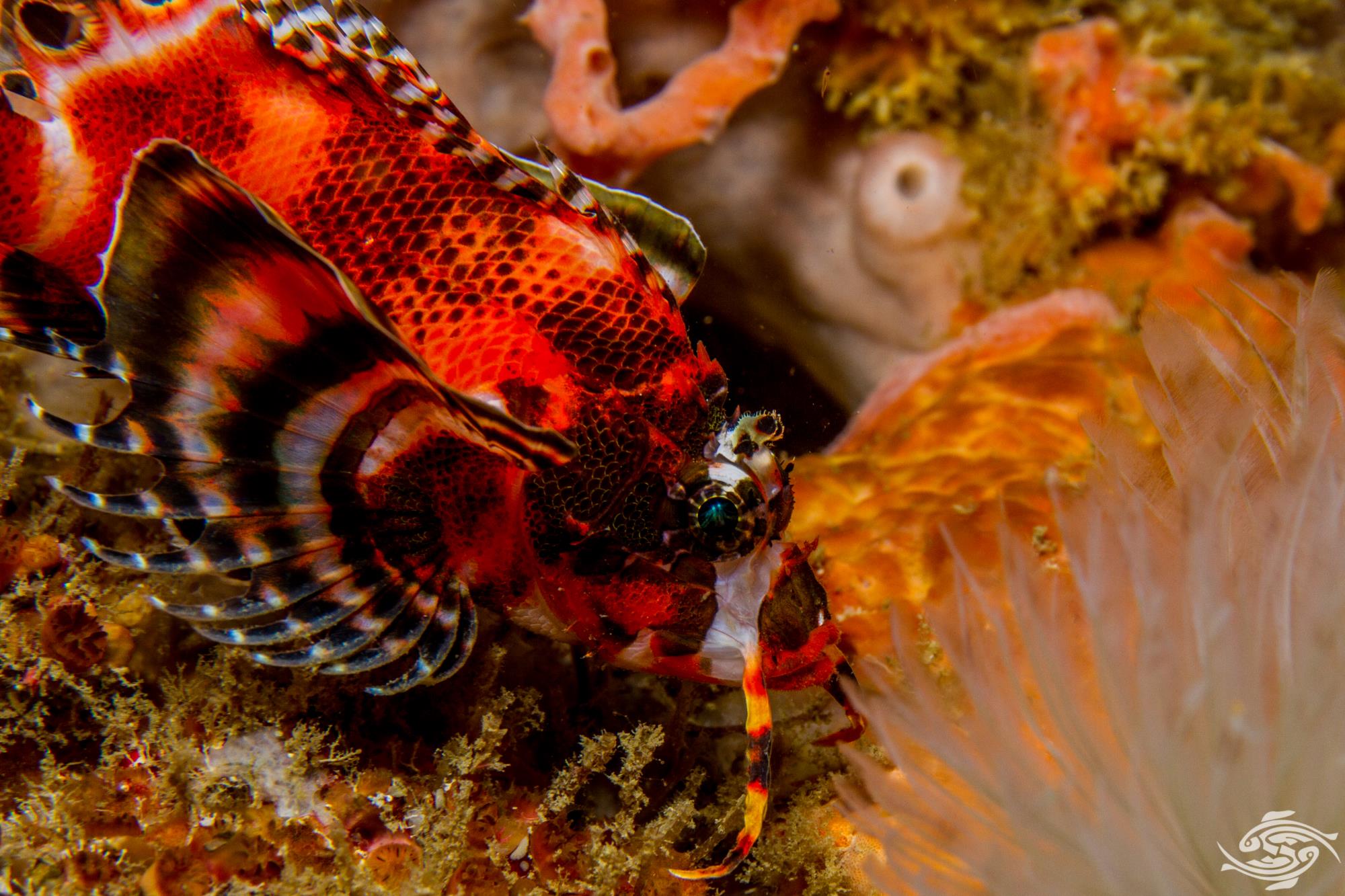 The Twinspot Lionfish, Dendrochirus biocellatus,  is also known as the as the Ocellated lionfish, Twinspot Lionfish, Twospot turkeyfish and the Fu Manchu lionfish.  As with all members of the scorpionfish family, they have poison glands for protection in their dorsal and pelvic fins. 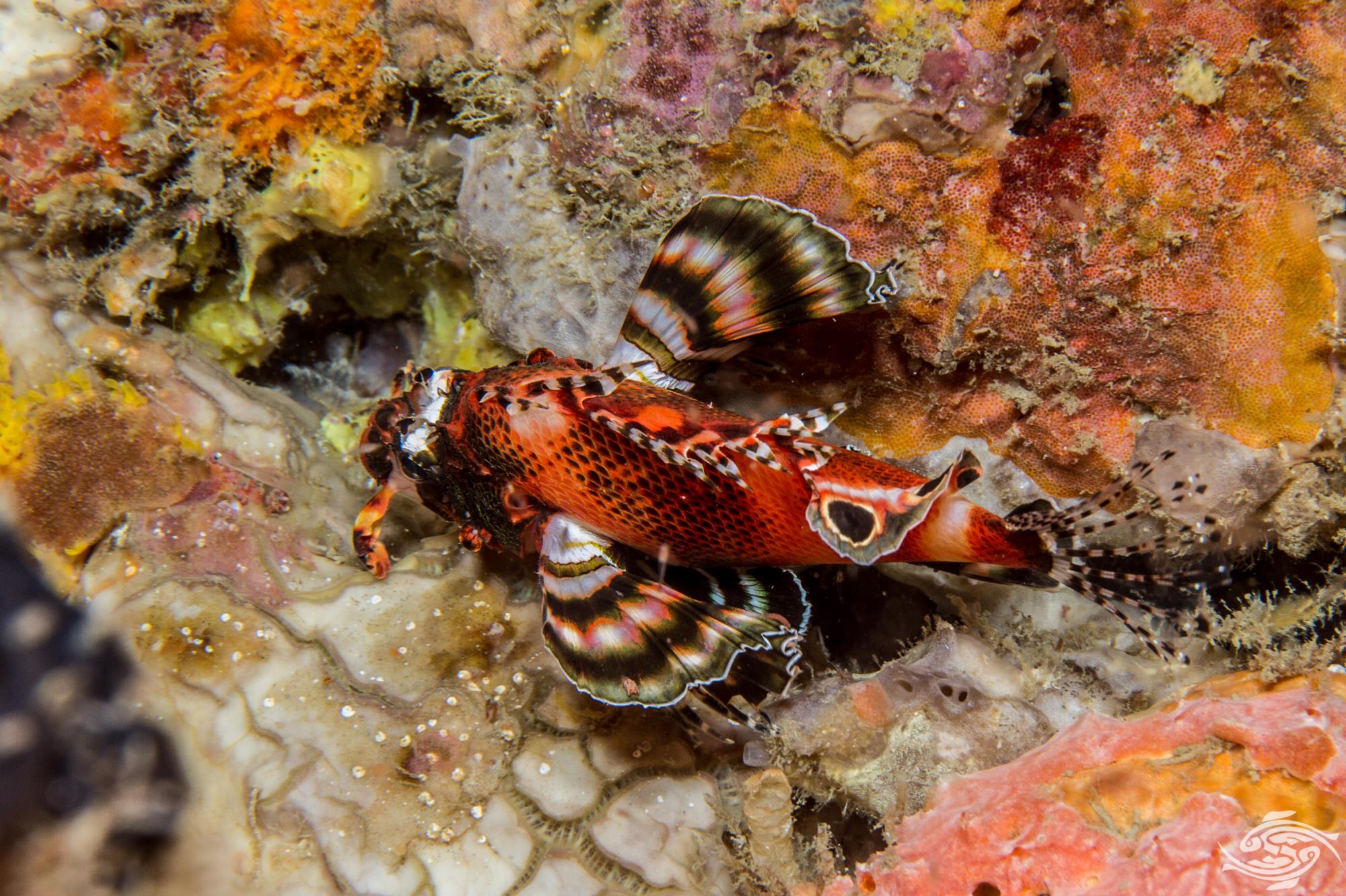 The Two Spot Lionfish is so named for the two ocellae or eye spots on its second dorsal fin. Some such as the specimen in these images have three spots and even four spots, this is a rare variation which can be seen in the image below. They are one of the smaller members of the lionfish family and grow up to a maximum of 20 cm. 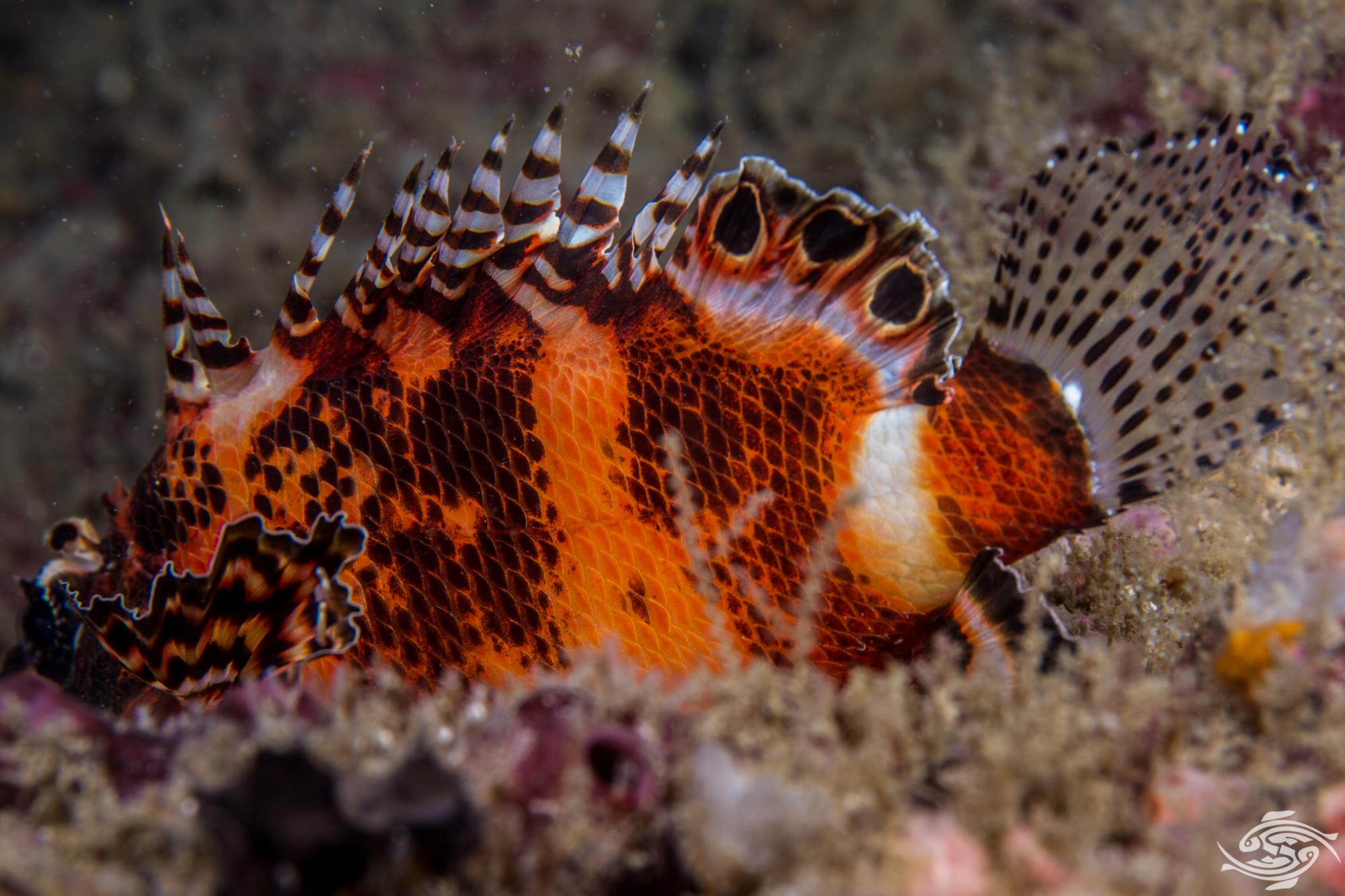 Twinspot Lionfish have a typical lionfish shape with a proportionally large head and mouth. The pectoral fins are rounded and are colorful , resembling a fold out fan. The body colour ranges from a bright red orange colour with indistinct black bars running down the body to a more orange brown colour. Two proportionally large appendages drop downwards from the sides of the mouth giving the appearance of a moustache. The name Fu Manchu Lionfish is derived from their resemblance to an ancient Chinese courtier created by these moustache like appendages. 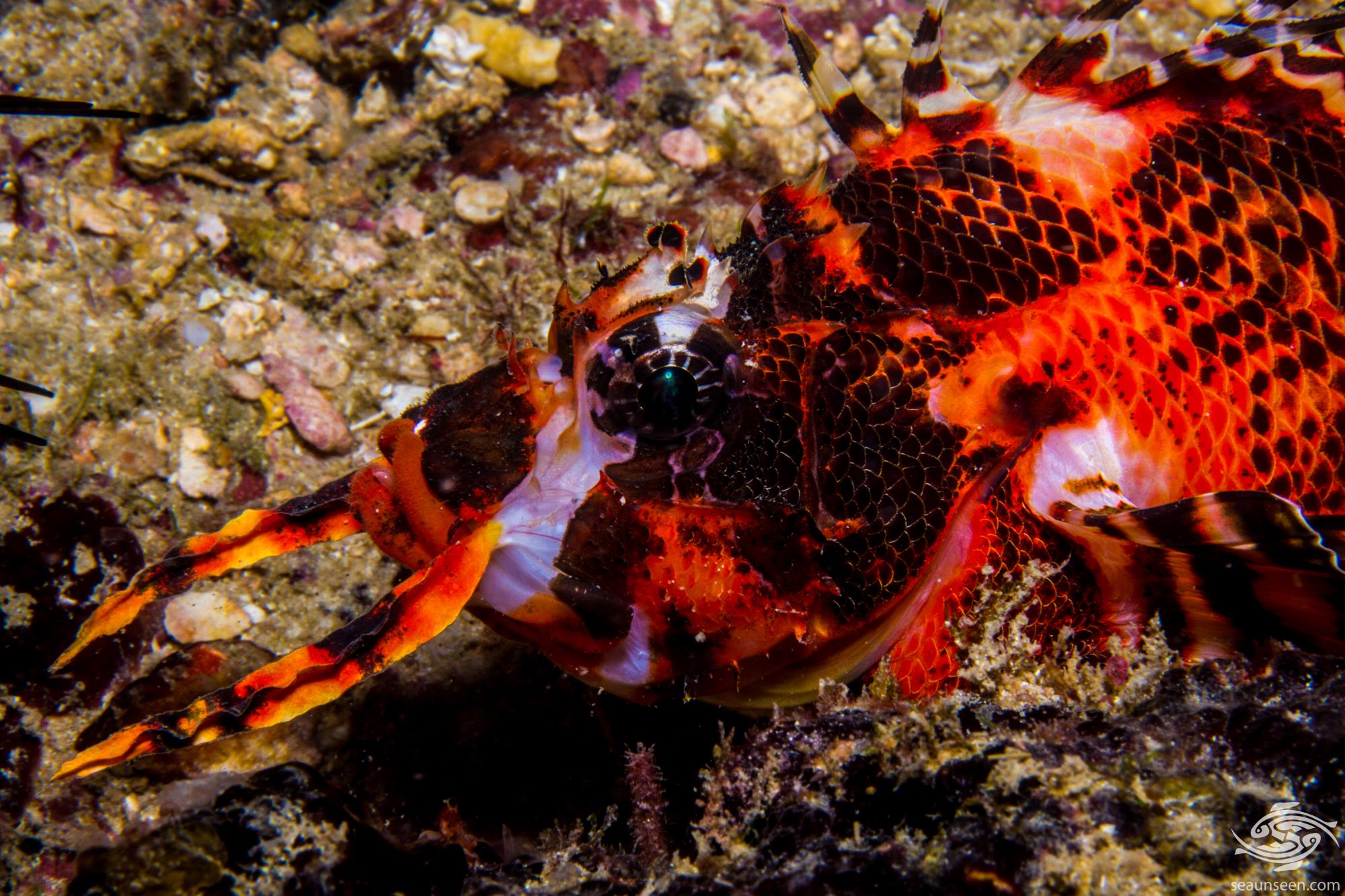 As with all lionfish, they have a cuticle of skin that covers the body and this is changed every few weeks giving them a resilience against parasites. As they near a skin change so the colours become less vibrant and they appear more dull. The specimen in the images has probably just changed skins giving it a vibrant look. Bright colours in the sea generally equate to poisonous and they have a series of poison glands in their dorsal and pelvic fins. 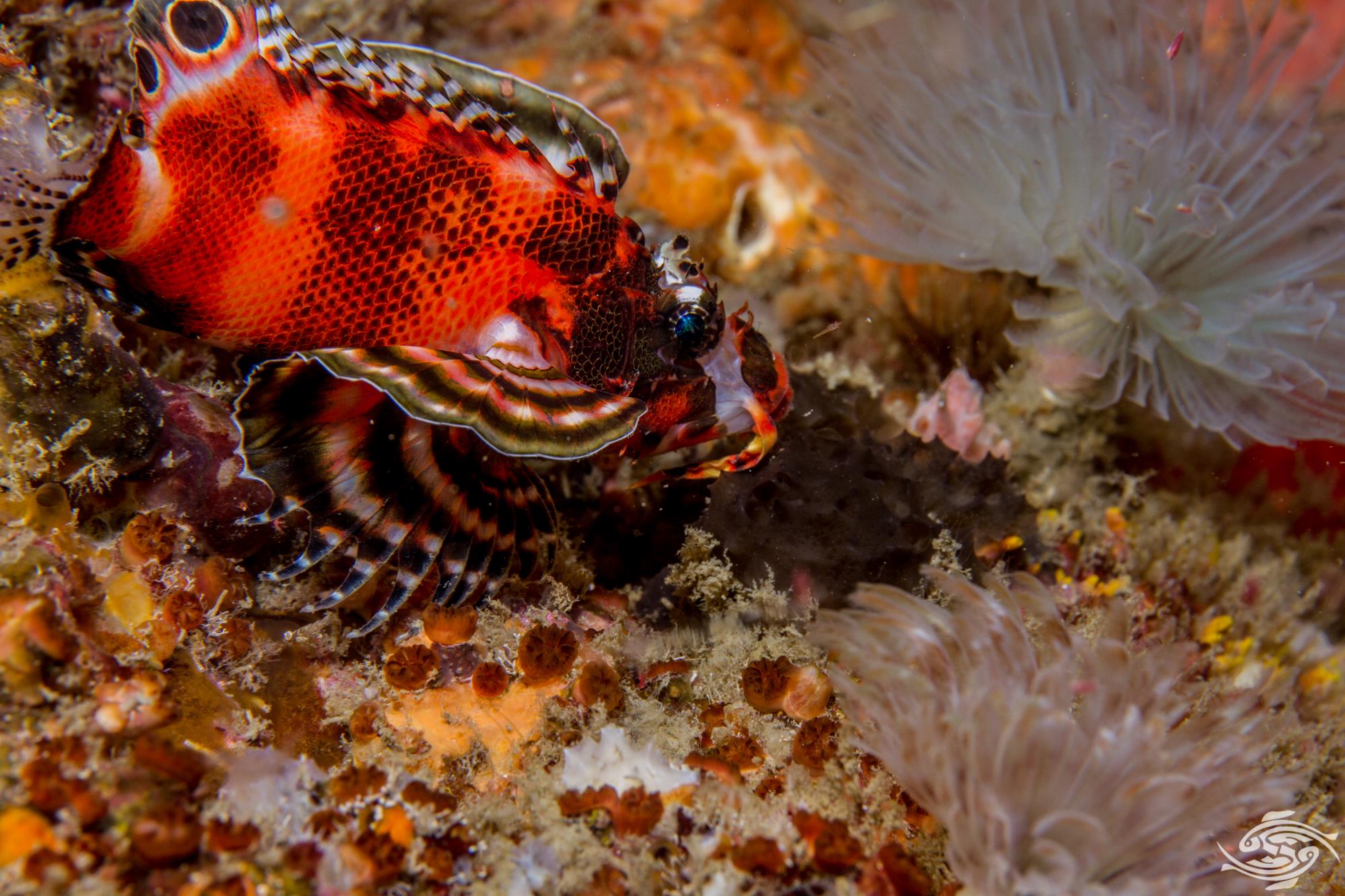 The Twinspot Lionfish are remarkably shy in the wild and usually retreat into a cave or hole at the sight of a diver. The more one attempts to view them the further away they try and hide. They are more often than not seen upside down on the roof of small or large caves during the day. They seem to prefer certain features over others and on one commonly visited coral bommie off Dar es Salaam in Tanzania, from the fin patterns we have identified at least four different specimens but seldom see more than one per visit. 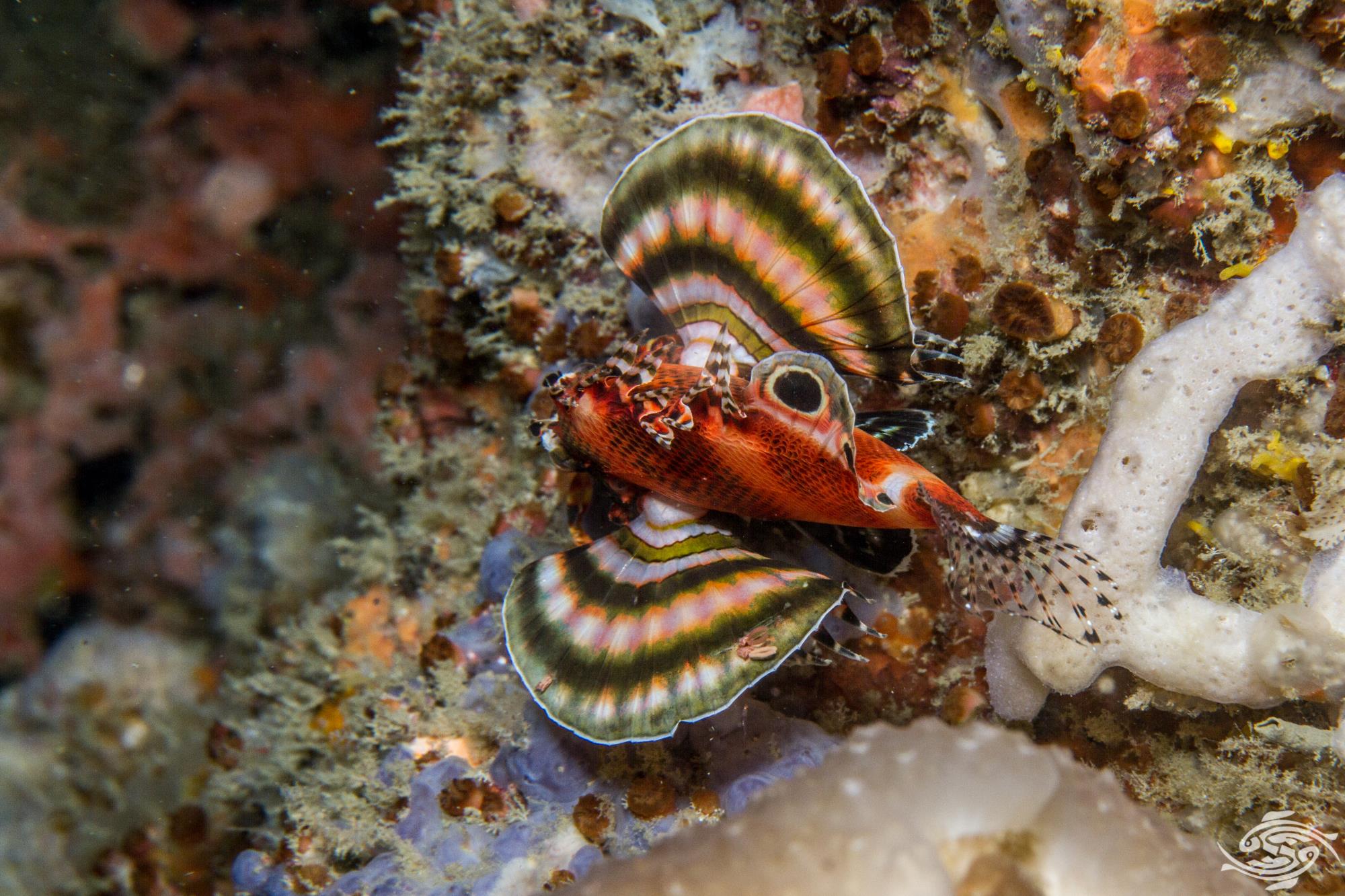 They are found across the Indo Pacific area, all the way up the East coast of Africa to the Red sea and are usually found in caves or crevices. The best time to see them is on a night dive when they are out in the open. 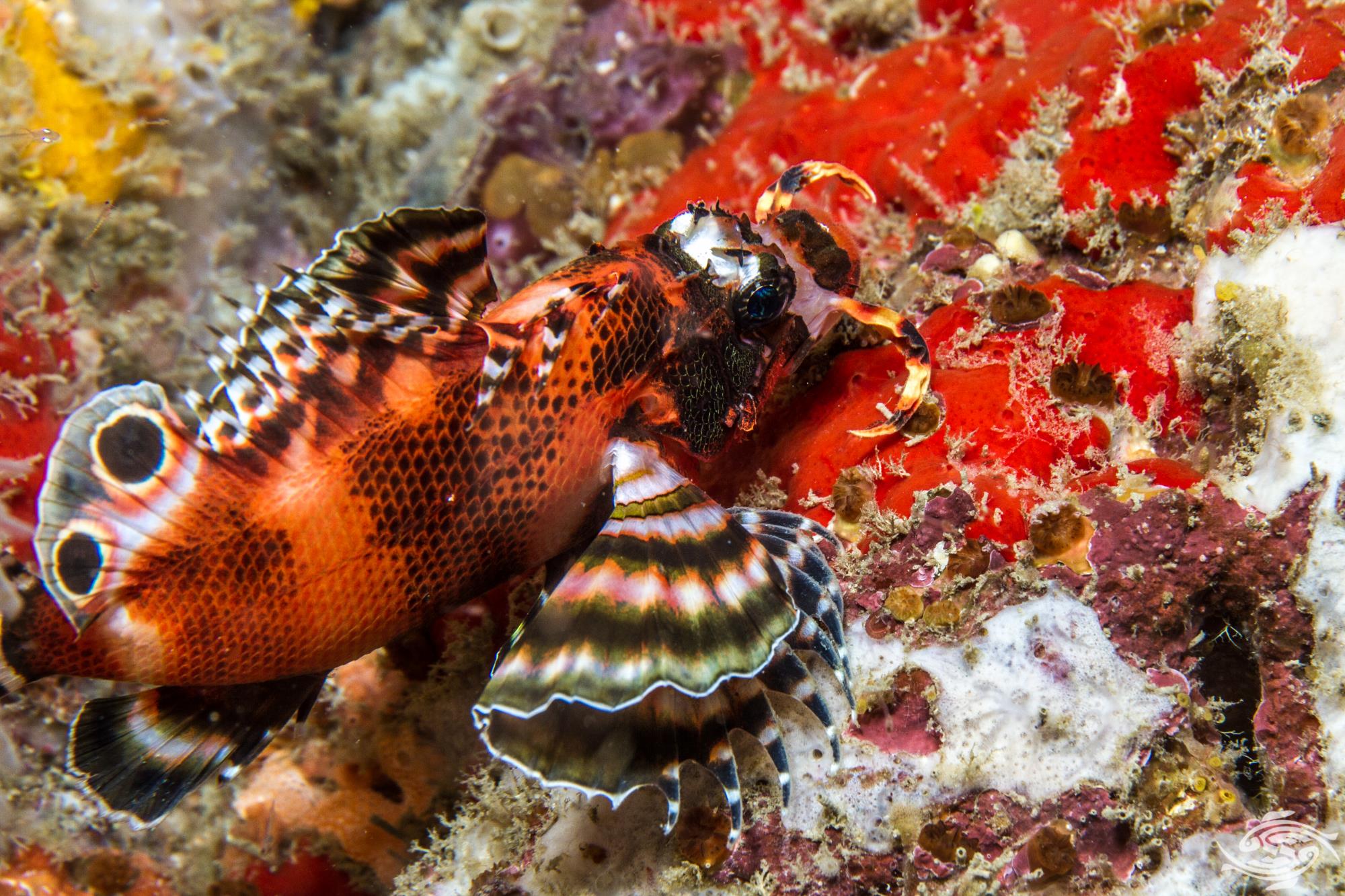 They prey on small fishes and crustaceans and pretty much anything that fits in their mouth. They use their proportionally large mouths to create a vacuum and suck in and swallow the prey. Lionfish usually try and slowly drift or move slowly toward their prey. They manipulate their dorsal and pelvic fins to distract or herd the prey into an appropriate position and then make a sudden lunge at the prey. Prey is swallowed whole and is sucked into the mouth. They tend to hunt mainly at night when there are larger numbers of nocturnal crustaceans around. 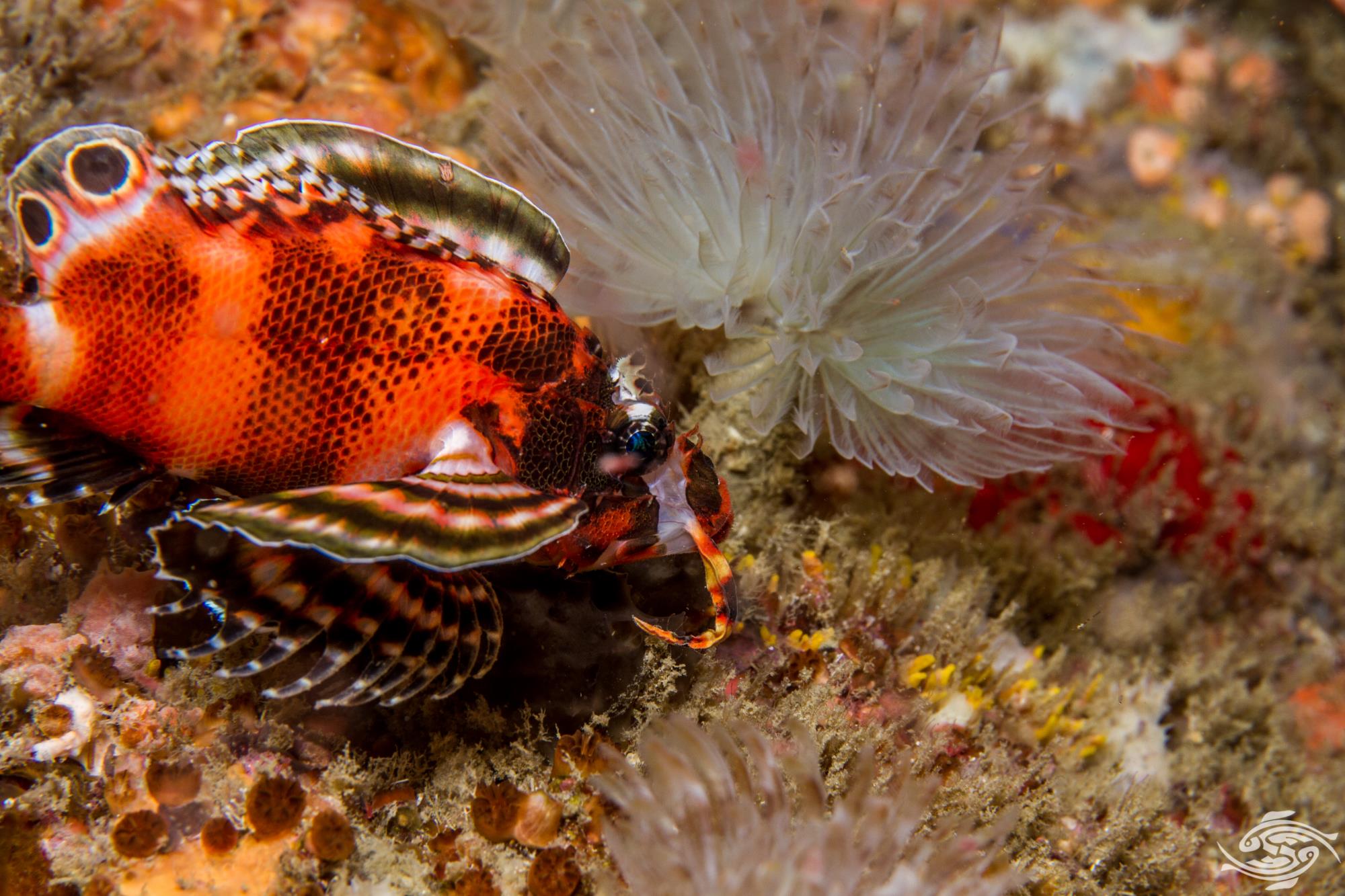 Lionfish are oviparous with females producing eggs that when fertilized are released and float near the surface. Little else is known about lionfish reproduction. The Twinspot Lionfish has been bred in captivity. 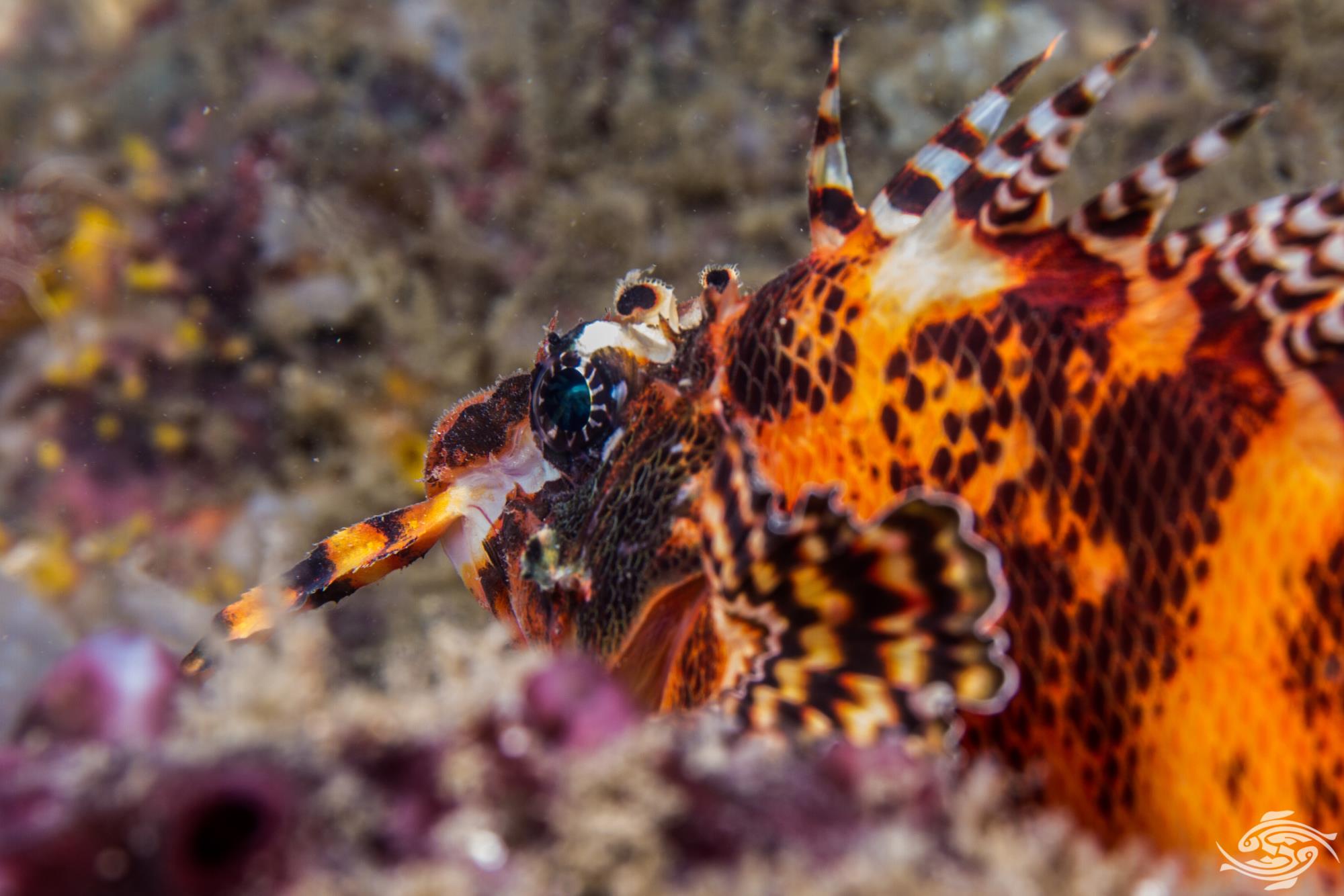 Twinspot Lionfish are not strong swimmers and tend to slowly stalk their prey. This makes them poor competitors for food in an enclosed space and great care has to be taken in choosing their tank mates. Equally the will stalk and eat anything that fits into their mouths so care has to be taken in this regard as well. Individually they make a great showpiece in the right type of aquarium. They are cautious fish and some may never switch over to processed foods.   Water conditions have to be kept just right for them and they are more difficult to keep than other lionfish. 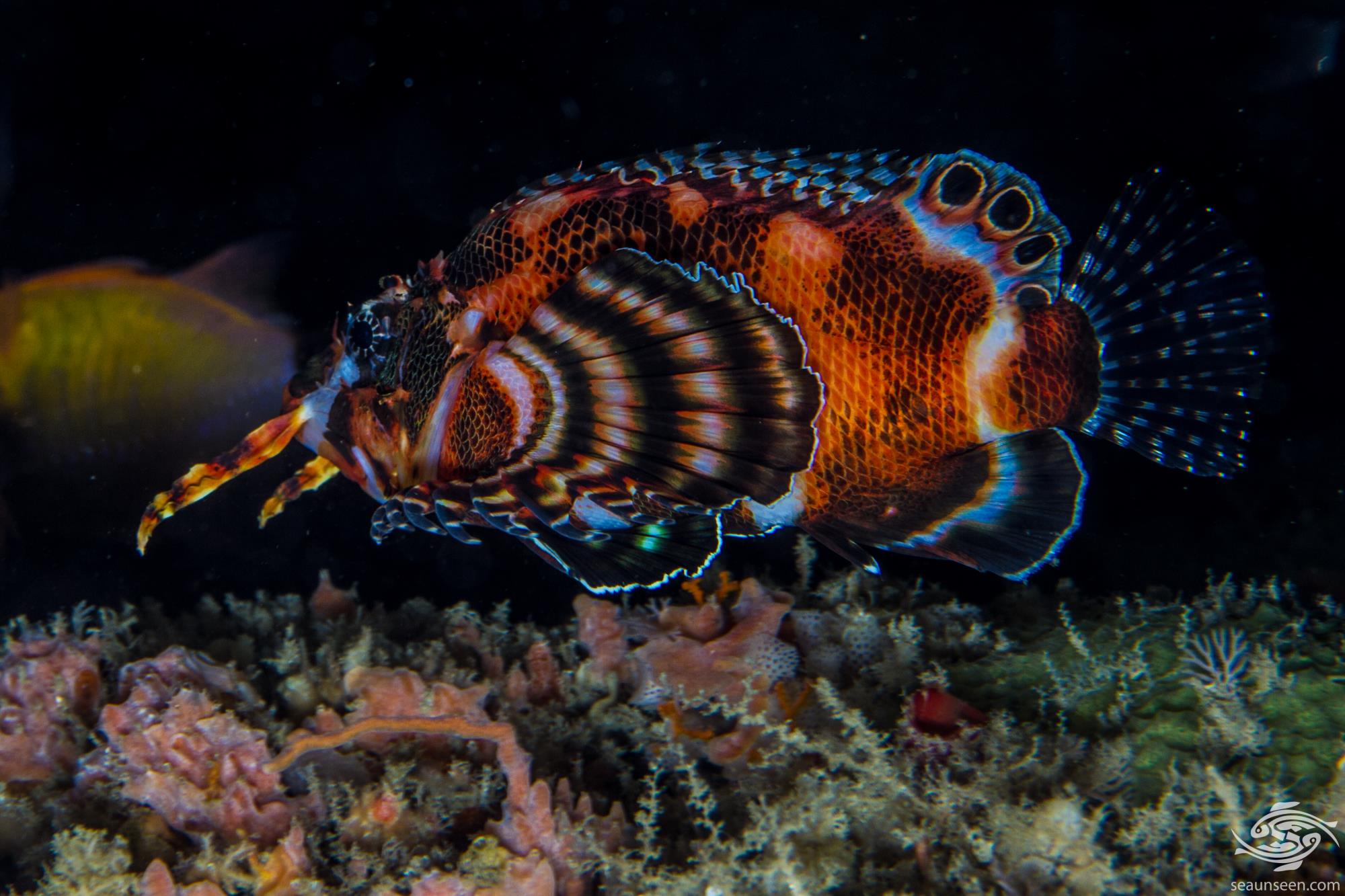 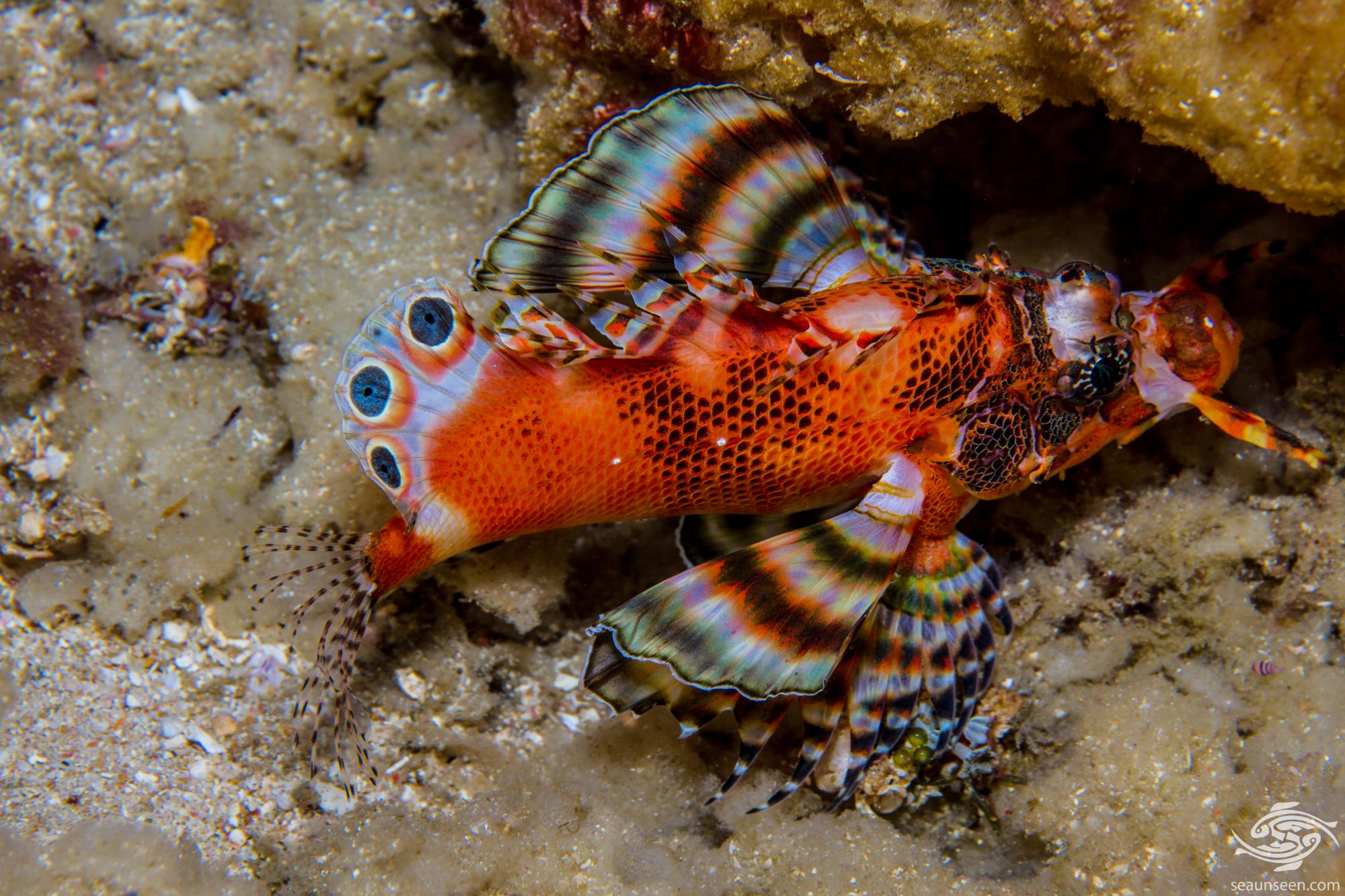 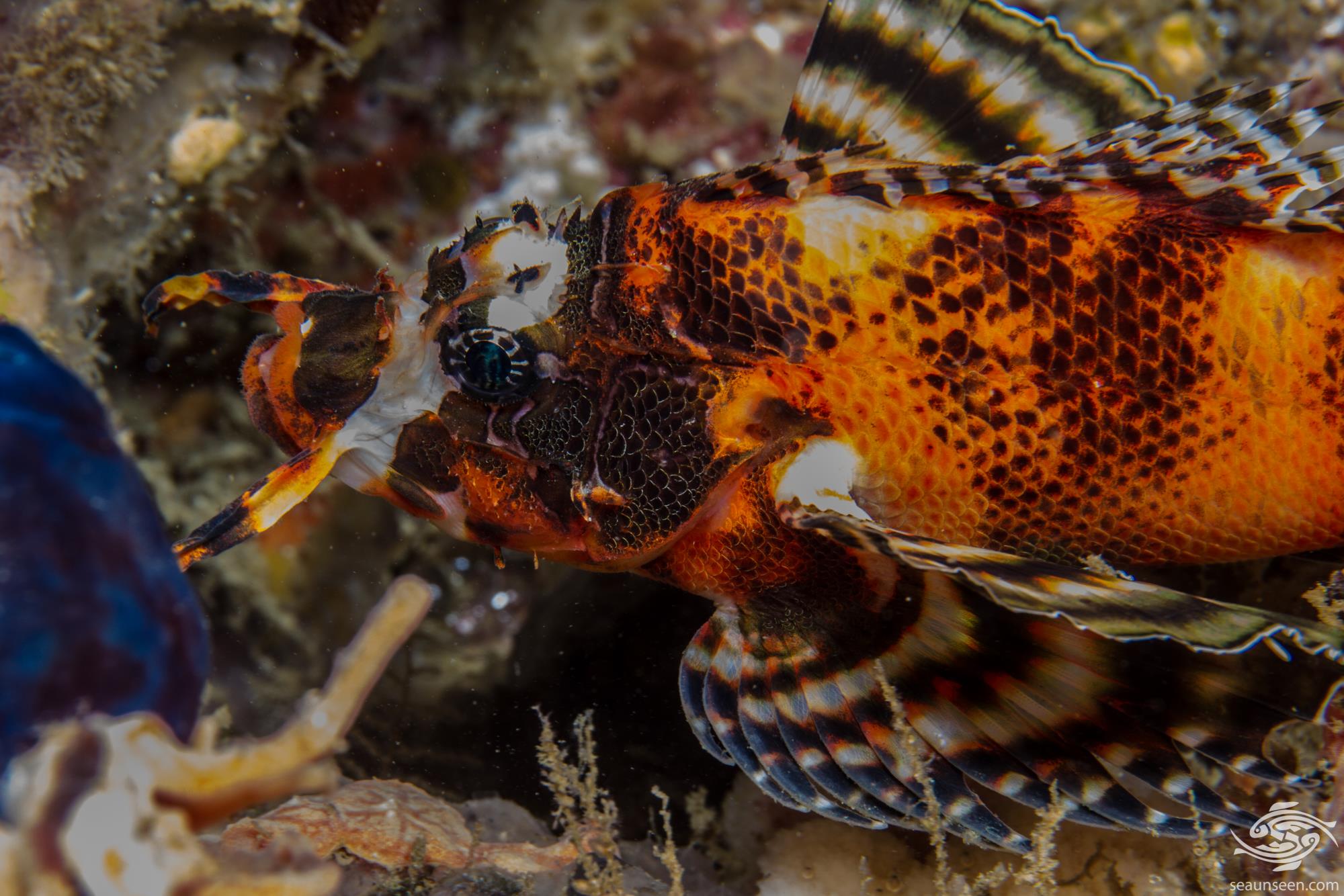