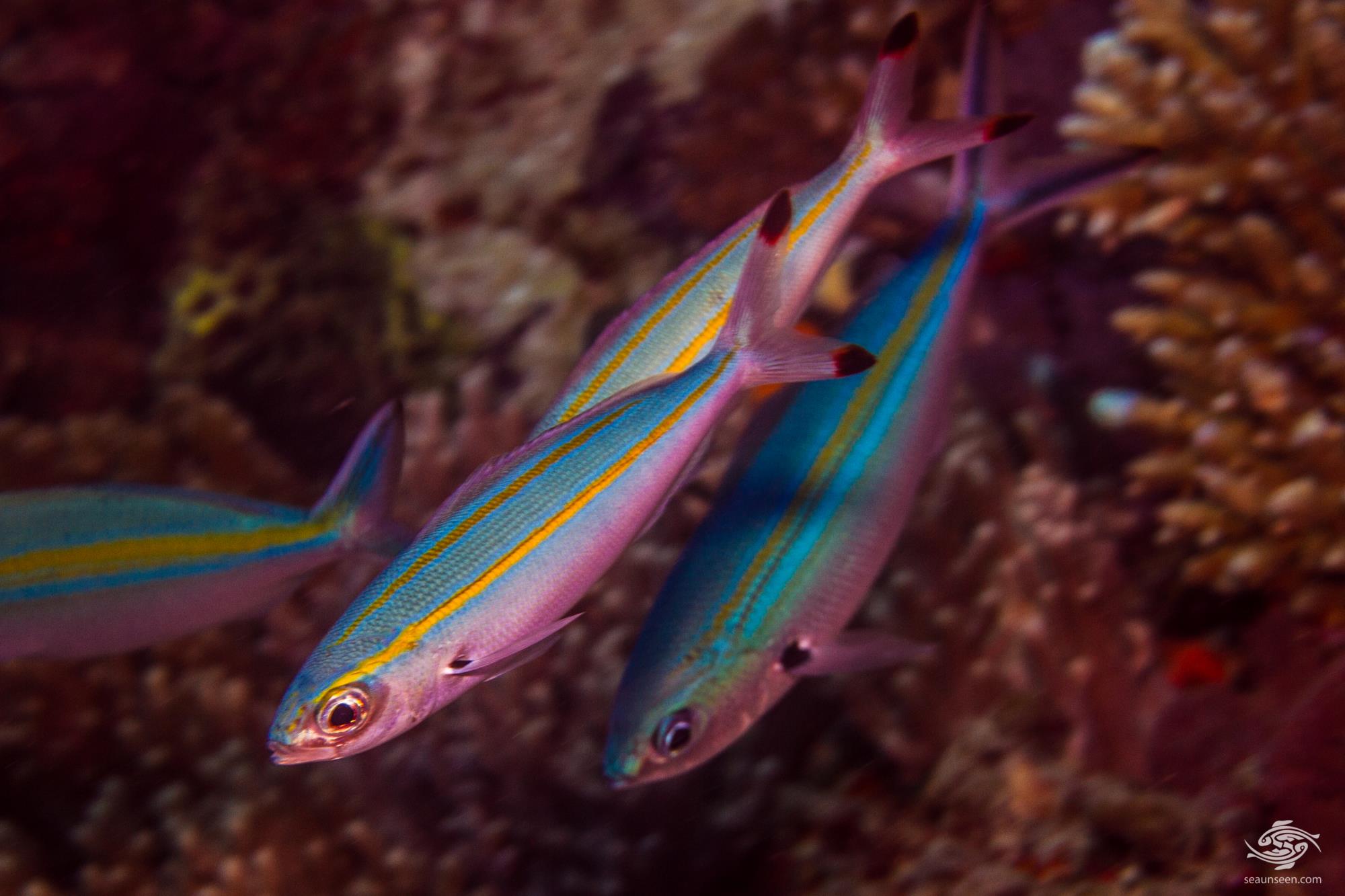 The Twinstripe Fusilier (Pterocaesio marri) is also known as Marr’s Fusilier, the Big-tail Fusilier, and the Black-tipped Fusilier. They are fairly common on the East African coast and are often seen swimming with other species of Fusiliers.

The Twinstripe Fusilier has a typical Fusilier shaped body, cylindrical and torpedo shaped with a highly forked caudal fin. They have a silver belly that often has a hint of pink in it depending on the angle one views them from. The upper body is an iridescent light blue colour and there are two thin yellow lines that run across the body.  The face has a small yellow area just above the mouth. They are extremely attractive looking fish and to have a shoal circle one in clean water with lots of light is a colourful experience.  They grow up to 35 cm in length. 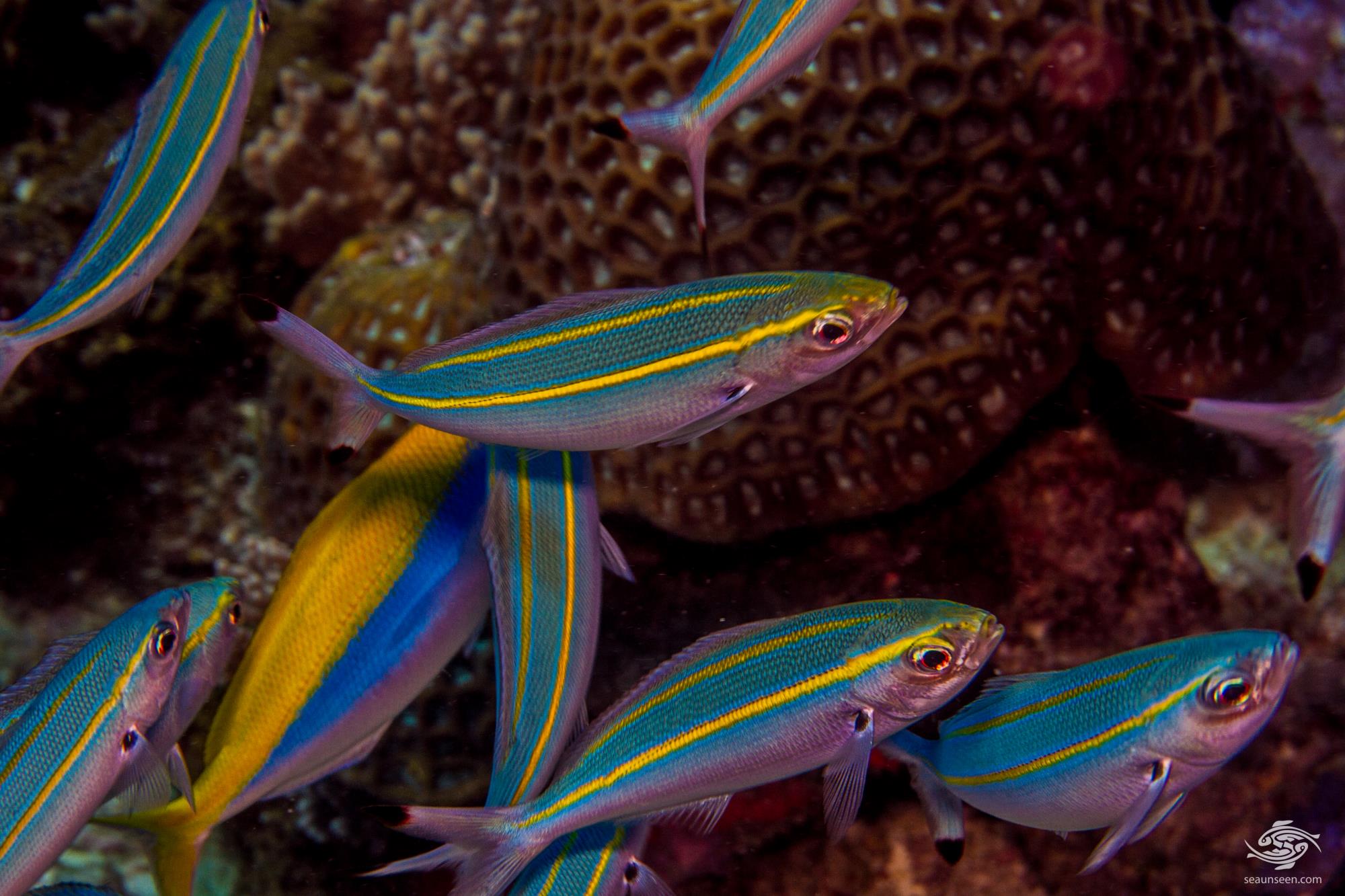 TWINSTRIPE FUSILIER IN THE WILD

The Twinstripe Fusilier is usually seen swimming over exposed reef flats or on the edges of drop offs. We have seen them down to at least 40 meters on deep walls . They often shoal with other species of Fusiliers and cruise the reef at quite some speed. As with all the Fusiliers they are curious fish and will often come in on divers and circle them before heading off again. 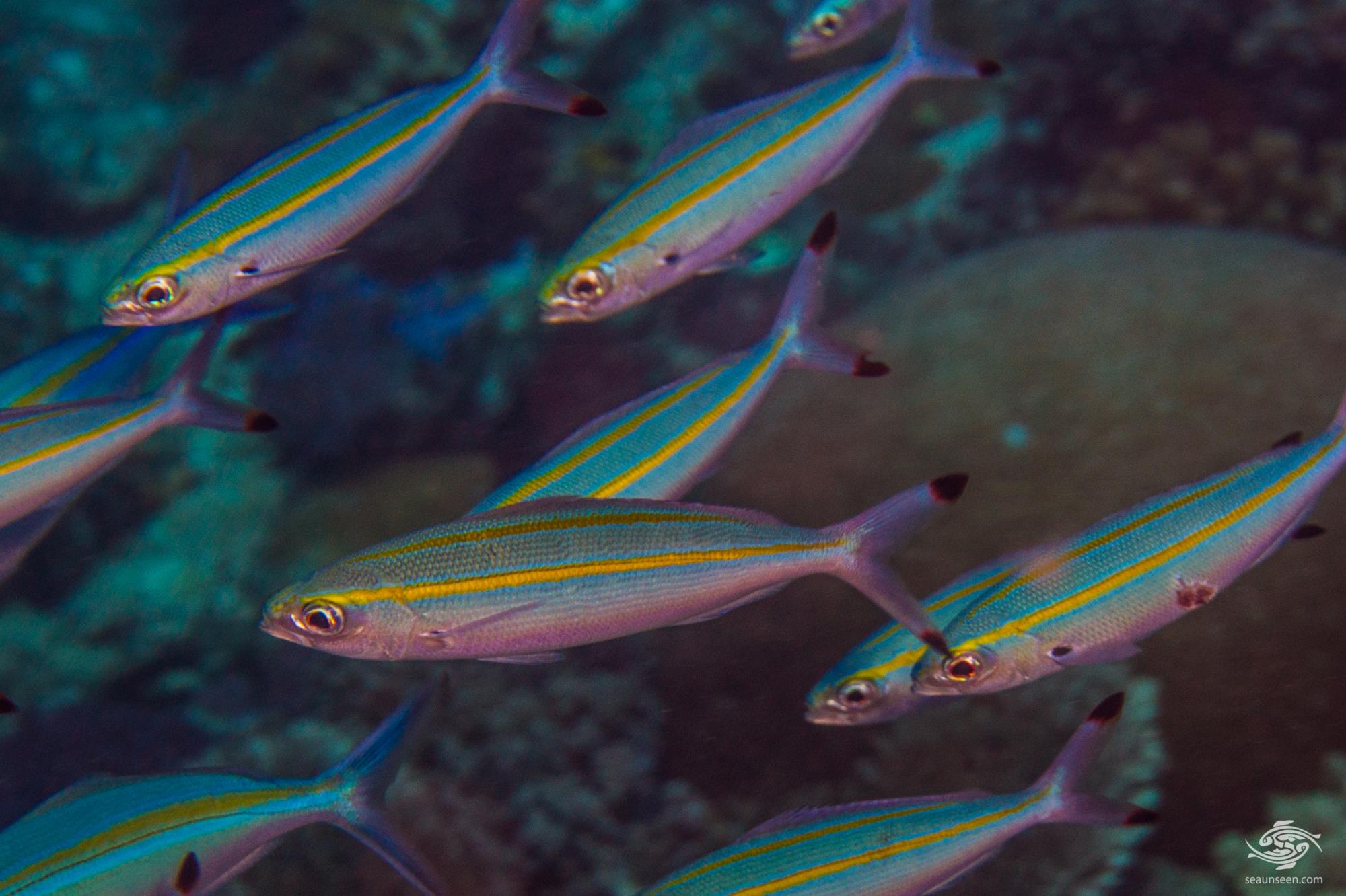 The Twinstripe Fusilier has a wide distribution and is found from the east coast of Africa across to southern Japan, down to Australia and across to the mid Pacific islands.  They seem to favor  depths of 10 to 25 meters but are typically found from 4 to 35 meters although we have seen a mixed shoal go to around 40 meters on a deep wall. 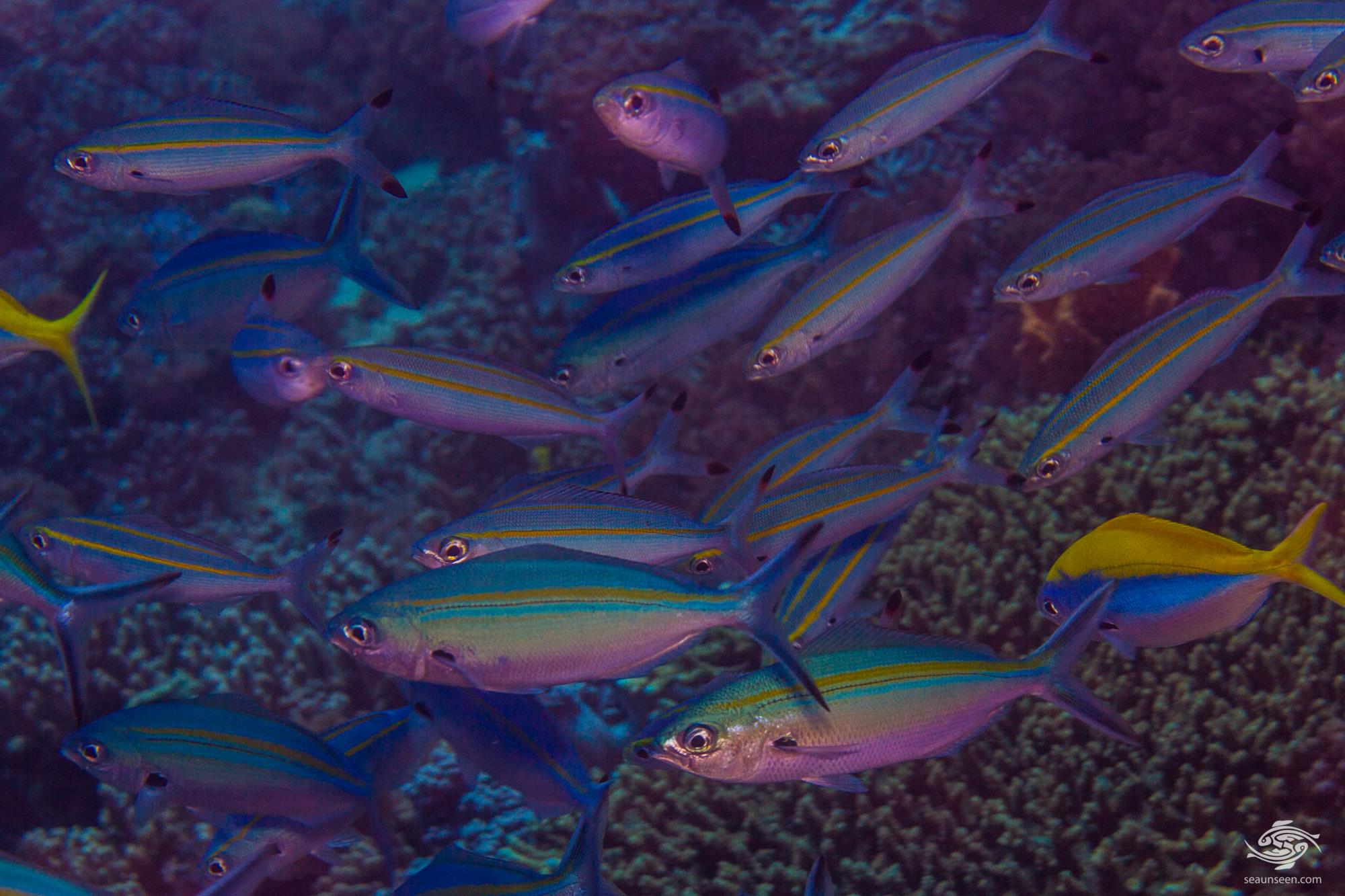 The Twinstripe Fusilier feed  exclusively on plankton and their upper jaw is capable of protruding outwards which makes it easier to snatch plankton out of the water table. They are preyed upon by gamefish such as Tuna and are regarded as excellent bait for catching Tuna. To this extent they are netted in many areas and being quite tough fish can stay alive in bait tanks.  In some parts of the world they are also caught in fish traps. 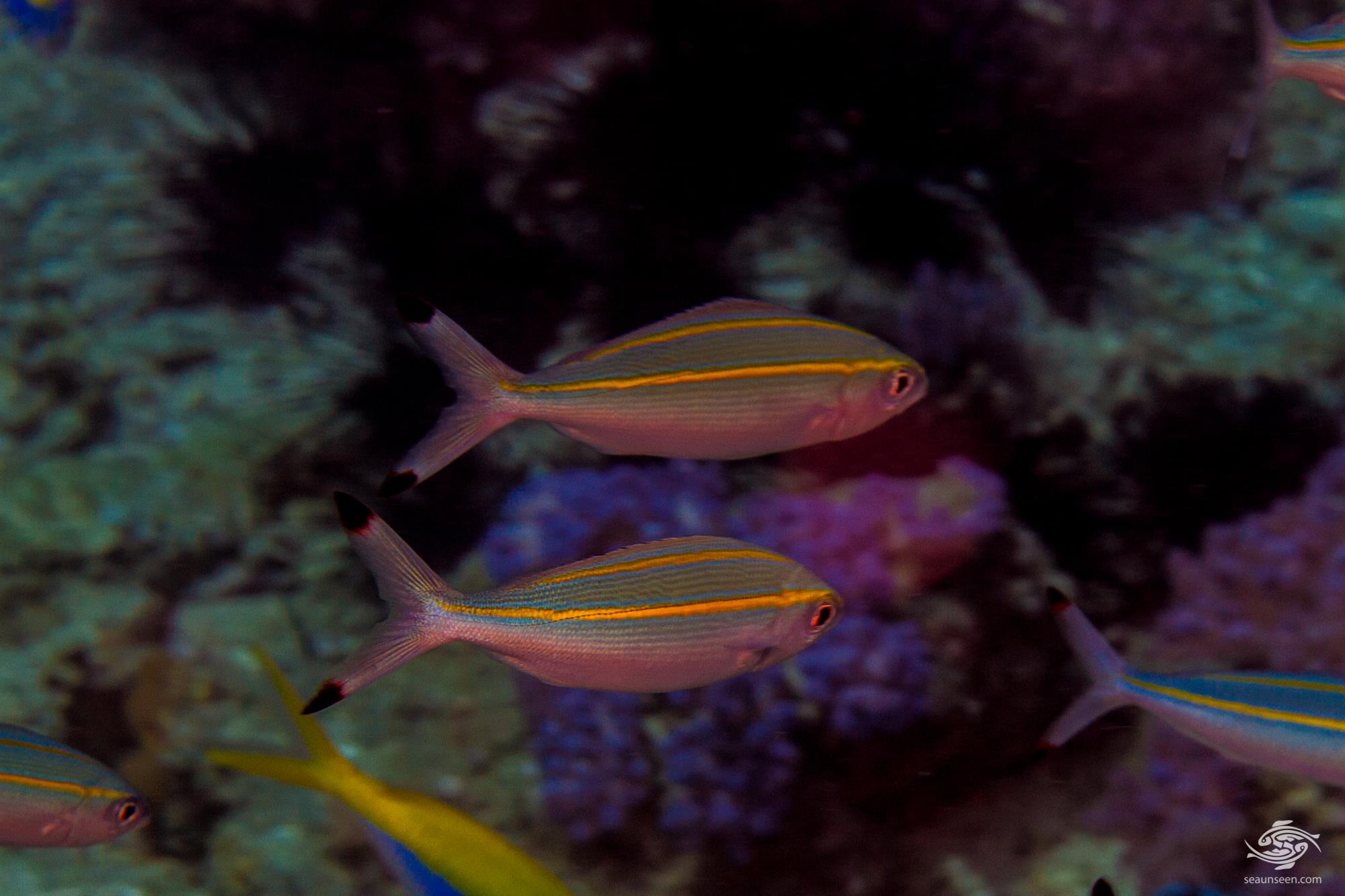 The Twinstripe Fusilier group spawn at dusk usually on a slack tide and research indicates that they are capable of releasing large numbers of eggs. The eggs once released into the water table hatch and the juveniles are planktonic for a period of time. All the Fusiliers are thought to be prolific spawners. 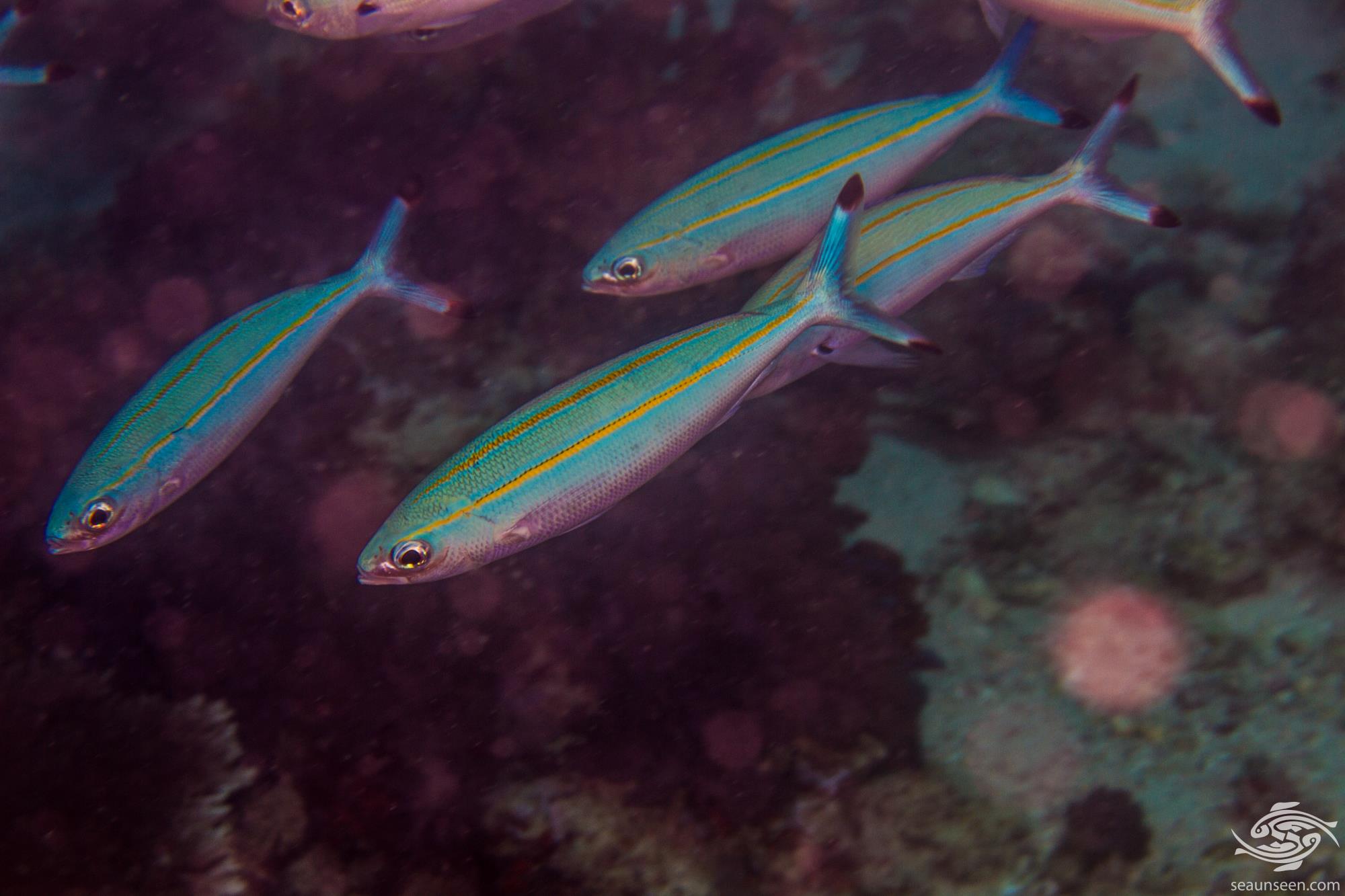