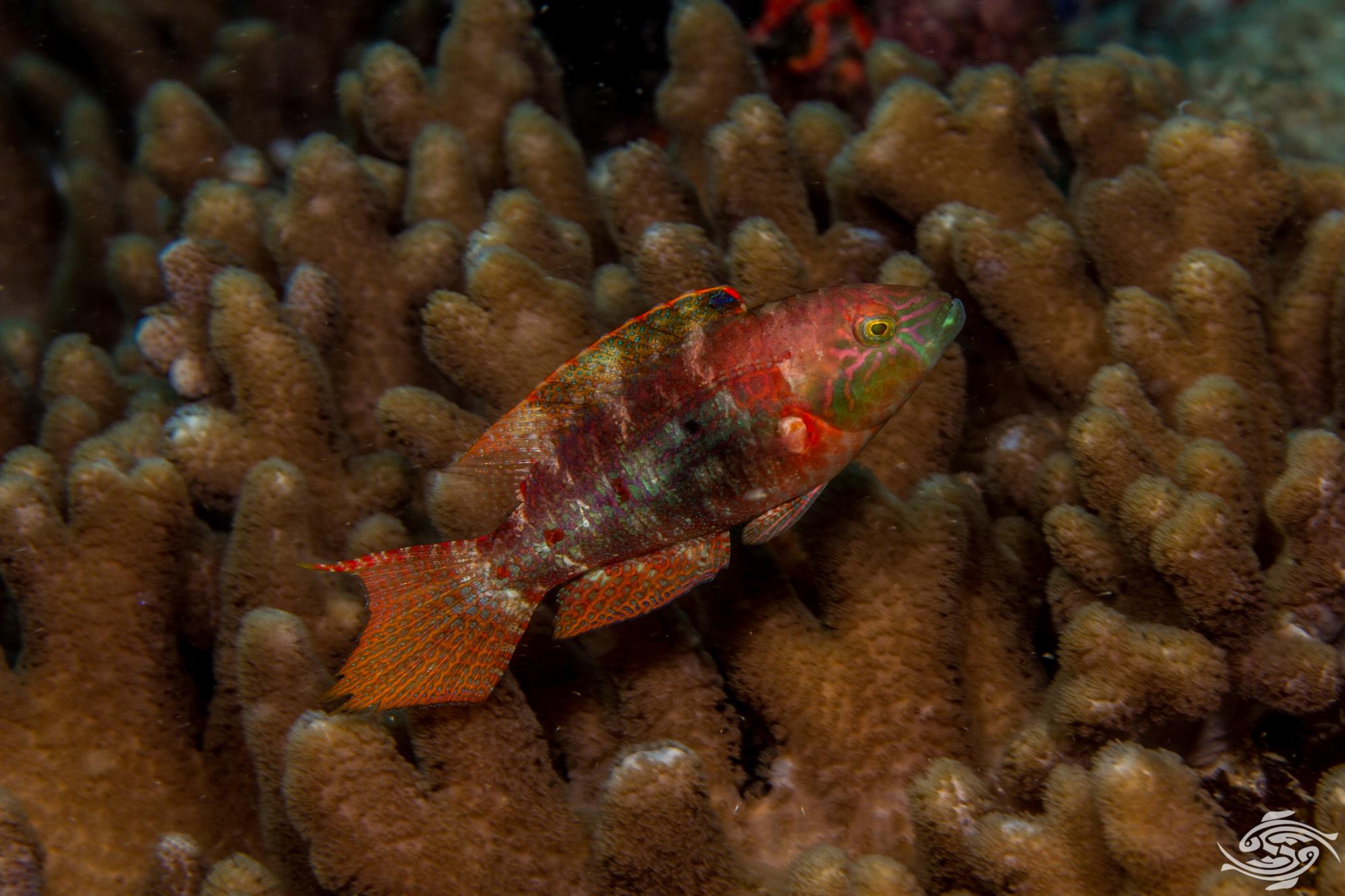 The Two Spot Wrasse Oxycheilinus bimaculatus also known as the Little Maori wrasse and Two-spot Maori wrasse. They are relatively common inhabitants of the reefs in Tanzania and are the smallest wrasses of the Oxycheilinus genus.

They are sometimes referred to as Maori wrasses because of the resemblance of the reticulated facial patterns to Maori Tattoo’s.  The males when in their courtship colors are particularly beautiful looking fish. 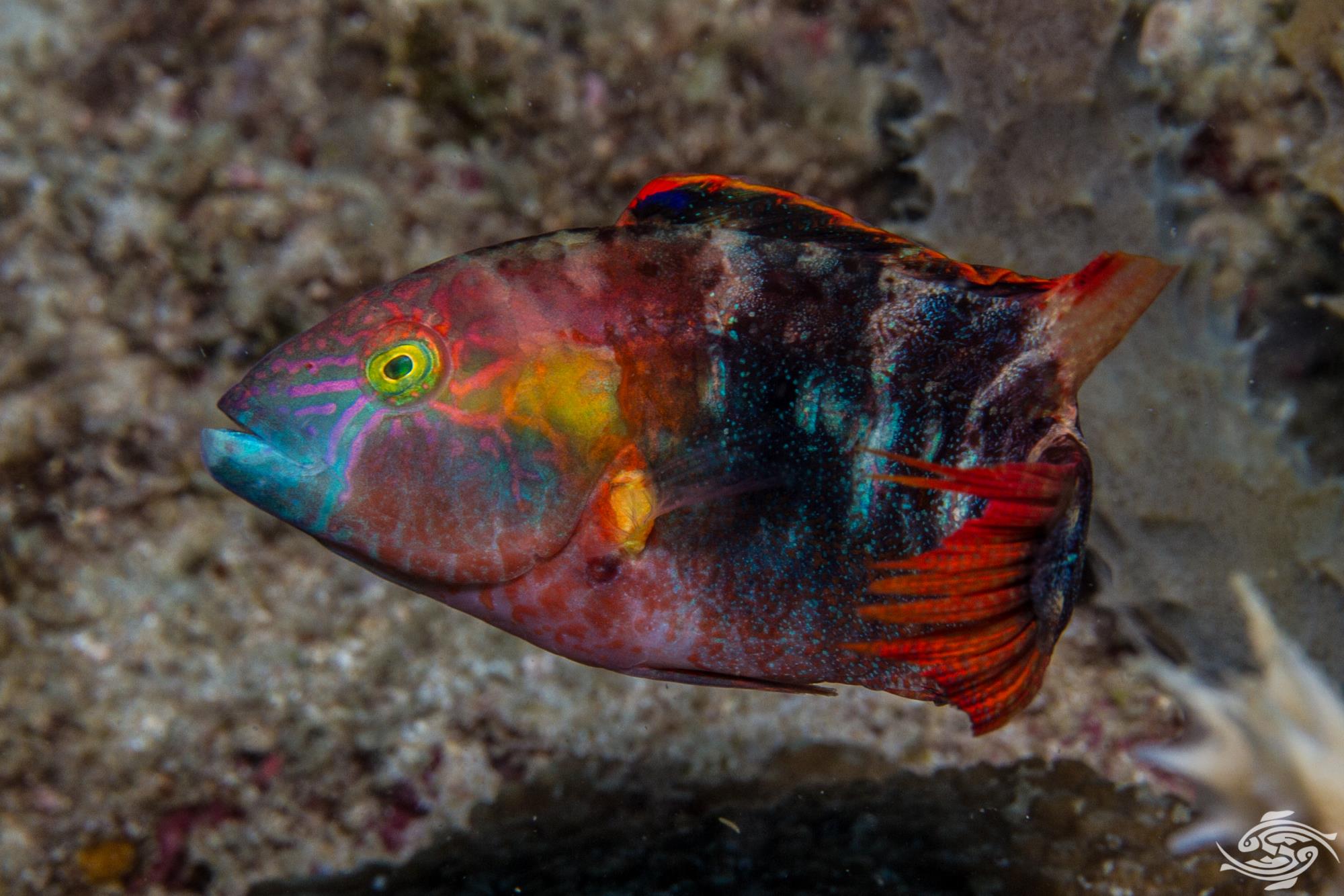 In Tanzanian waters there is considerable variation in coloration between the adults.  The juveniles are usually a reddish colour. As they move into the female initial phase so the colours begin to vary from a white and red to a red white and black colouration.

The terminal phase males have an even greater colour variation as can be seen in the images on the post. Each individual has a different combination of colours. Red, yellow, orange, black, white and green are the main colors. There is often but not always a blue spot on the forward area of the dorsal fin and a further black spot midway on the body behind the gill. These two spots give them their name. They grow up to 15 cm in length. 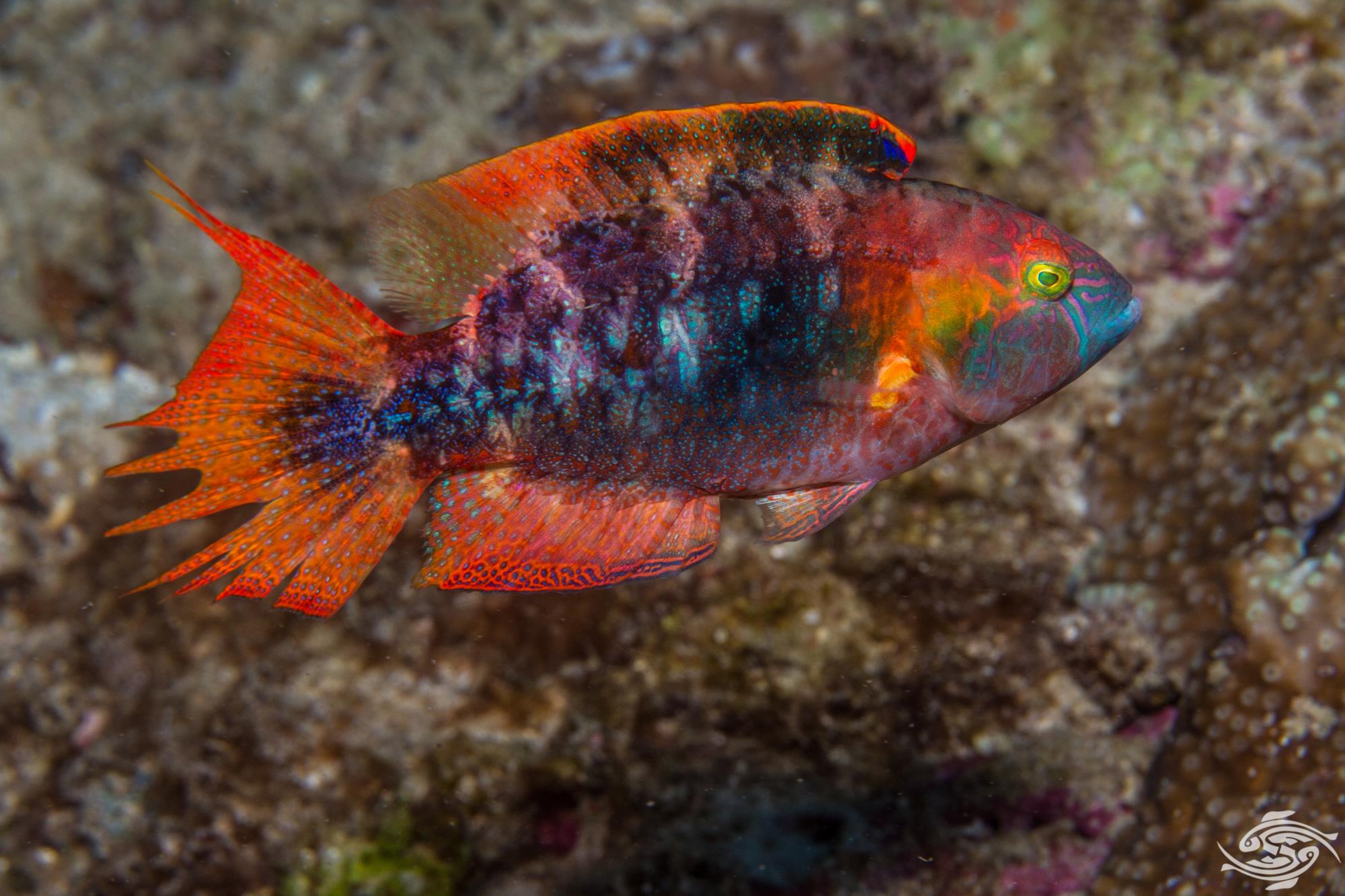 They grow up to 15 cm although they are usually around 12 centimeters. 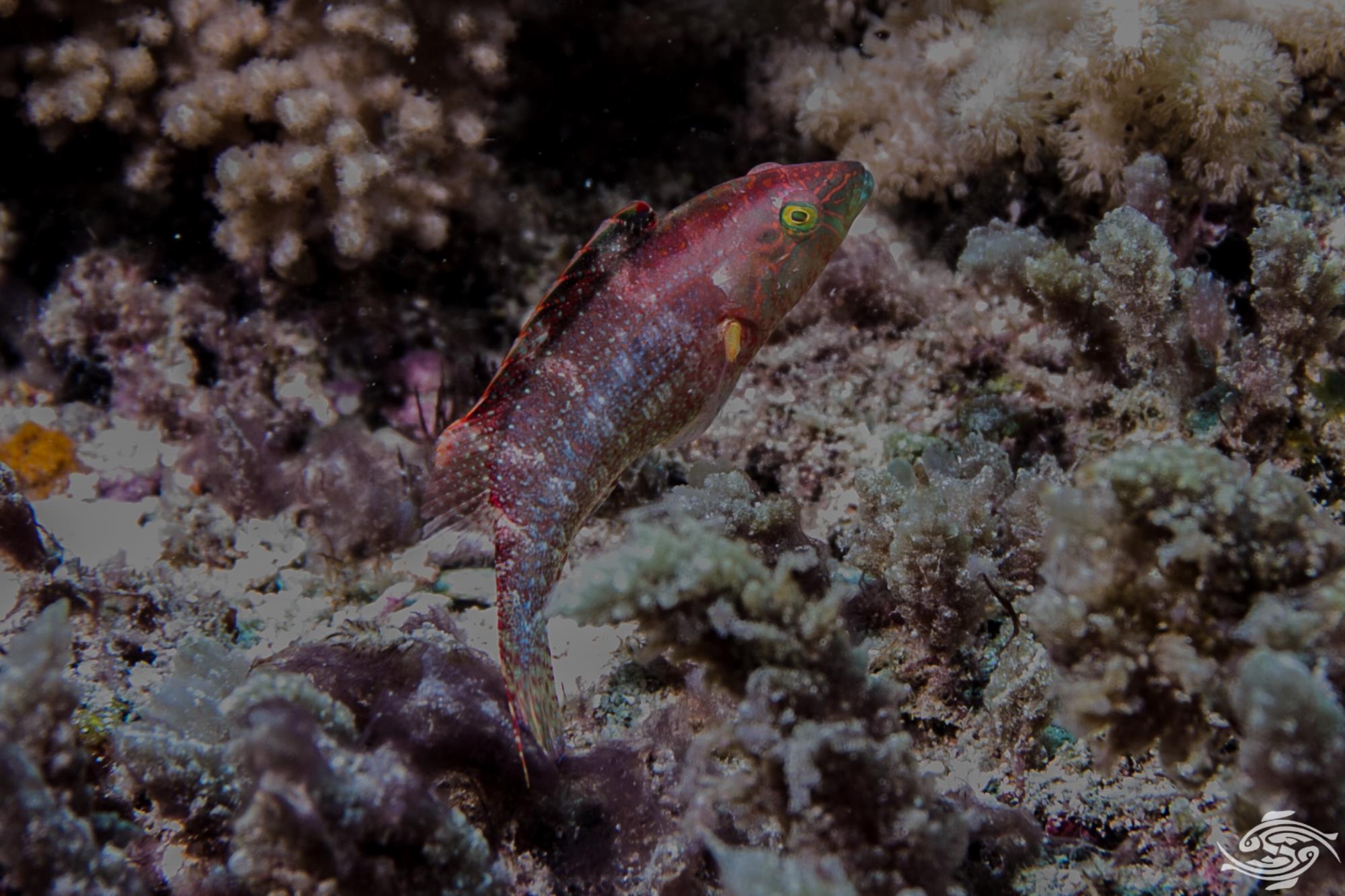 TWO-SPOT WRASSE IN THE WILD

The Two-Spot Wrasse is very common on the deeper seaward reefs in Tanzania from depths of 12 meters down to at least 30 meters. They are one of the easiest wrasses to photograph and the males will almost always posture for a photographer if they are approached slowly. They usually initially move away but if one stays still for a few seconds they return and posture. 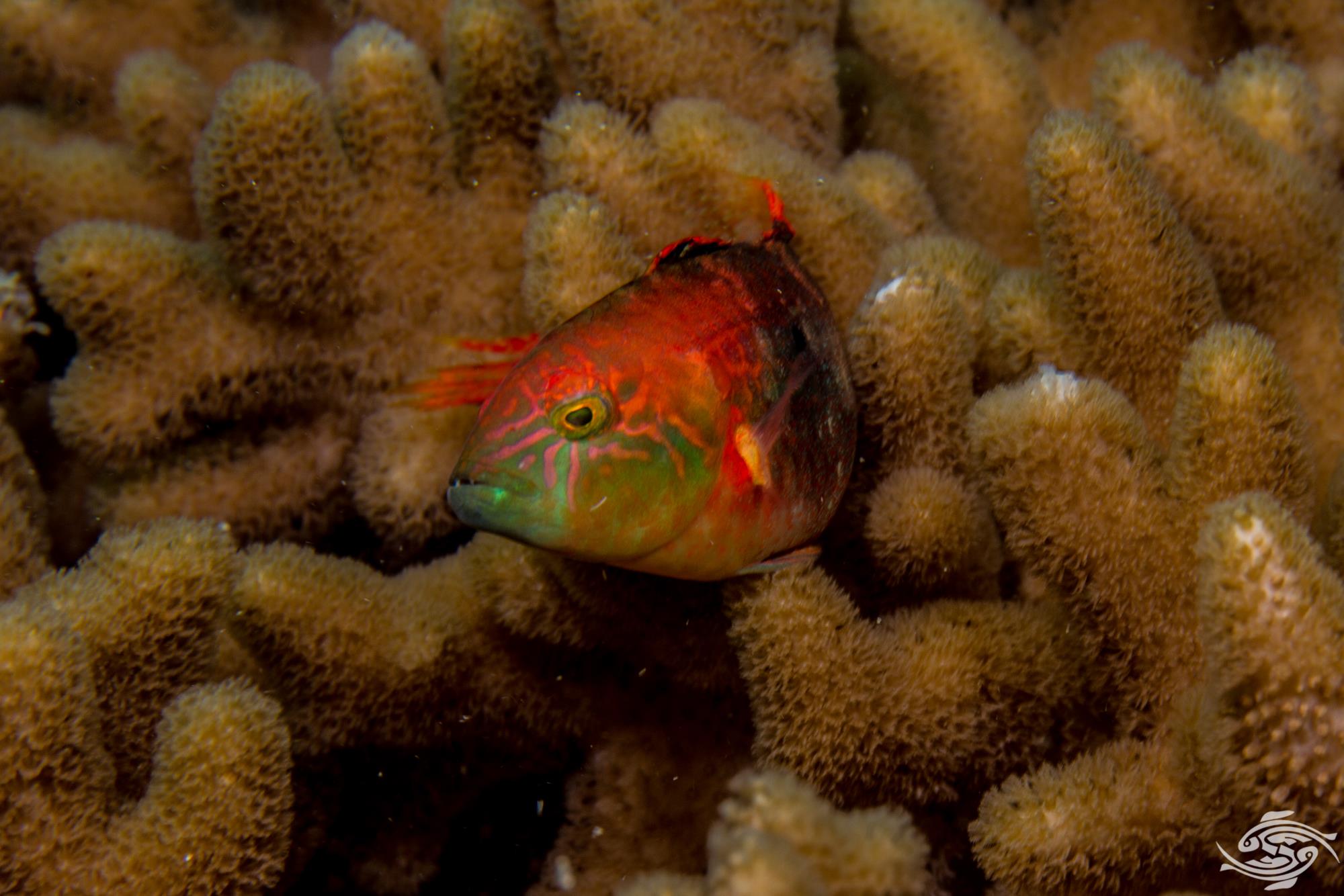 The Two Spot Wrasse, is found across the western Indian Ocean down to southern Kwa-Zulu Natal and across to New Caledonia in the west Pacific. They are mainly seen on the rubble and sandy areas between corals and tend to swim low close to the bottom. They are also common in soft corals on the top and sides of walls. 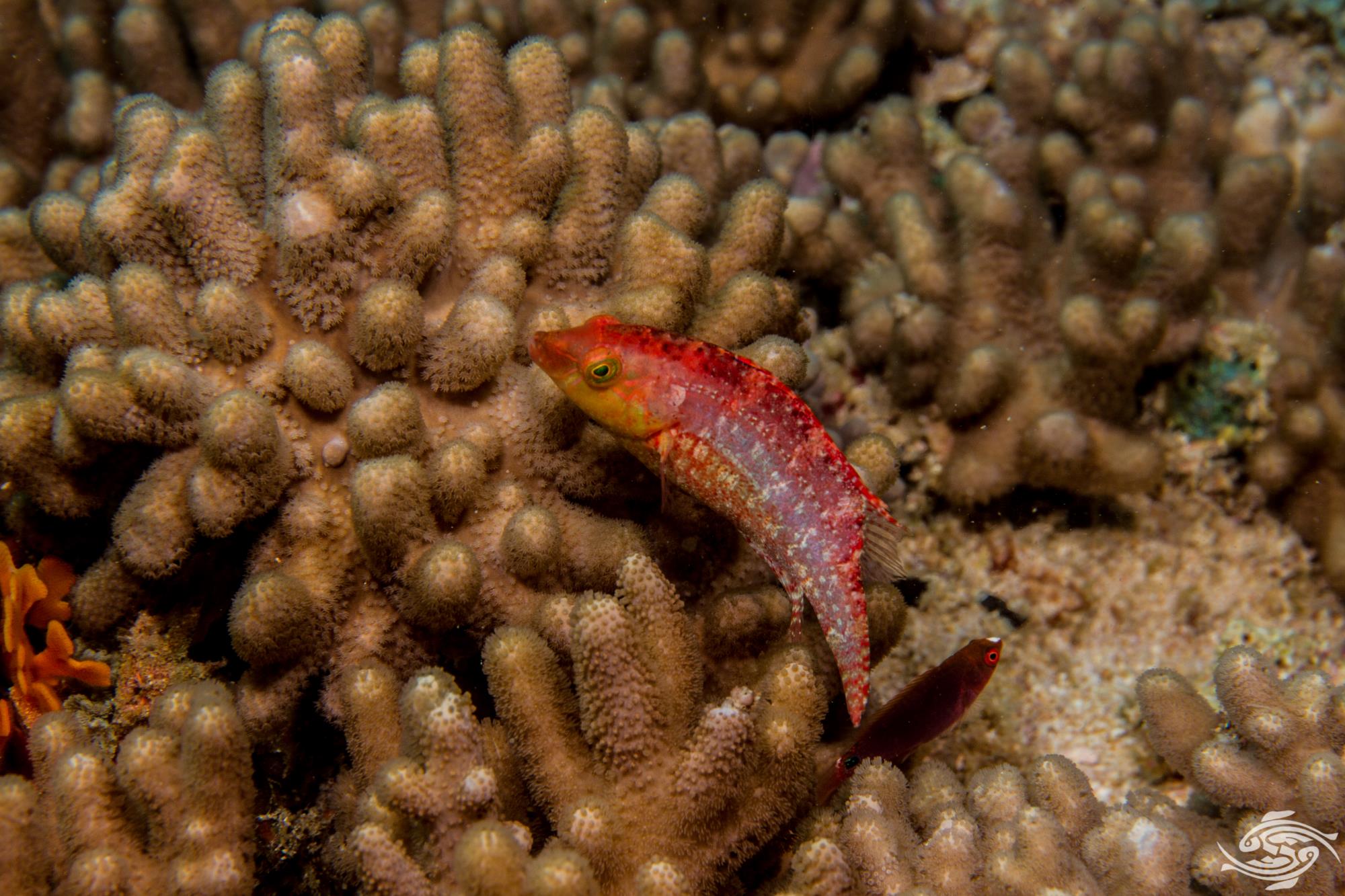 The Floral Wrasse feed on small crustaceans and mollusks and usually feed individually. On very rare occasions they have been seen swimming with groups of goatfish feeding on the surface of the reef. This is not common behavior. 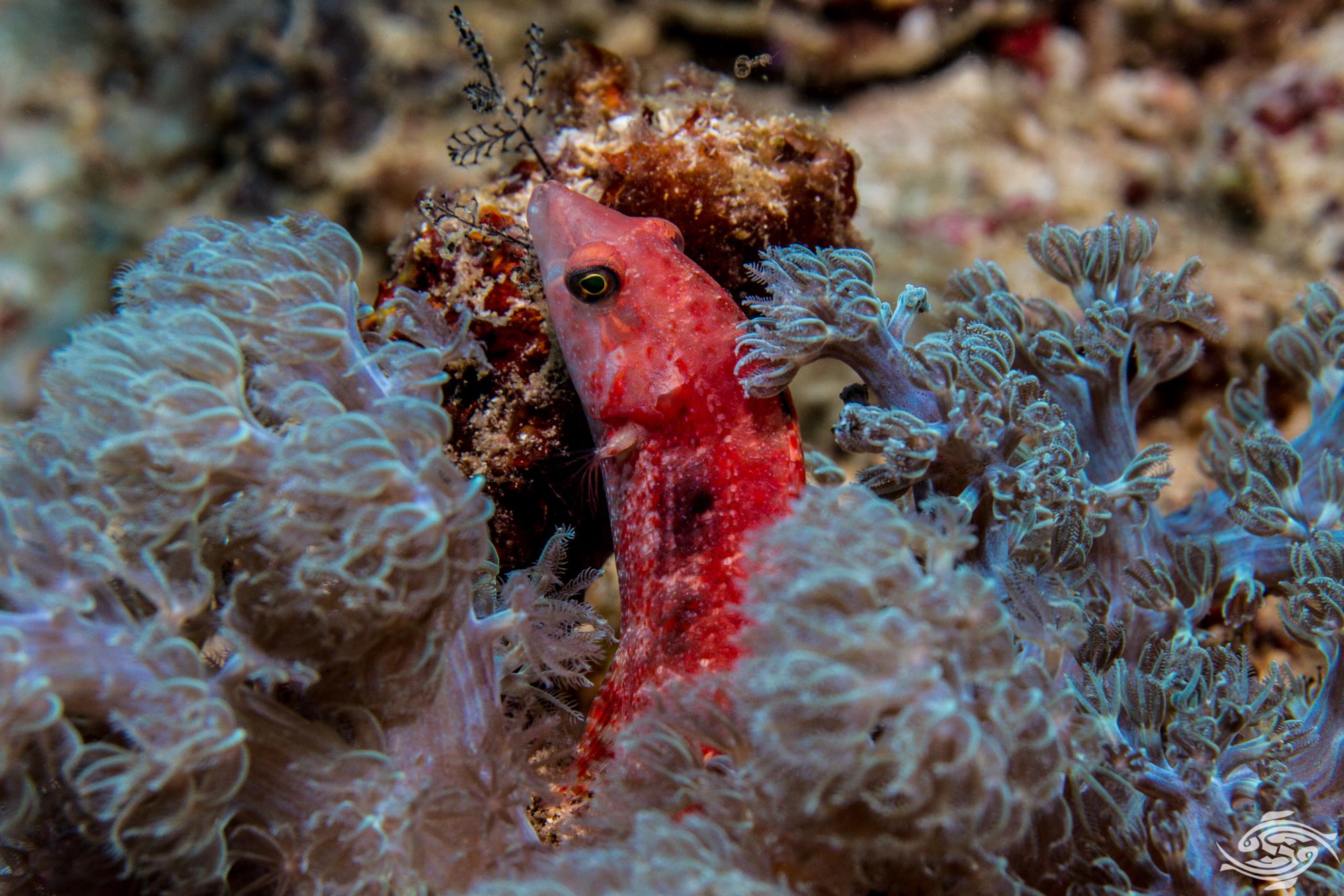 The Floral Wrasse is Oviparous, with probable distinct pairing during breeding. Little is known of their breeding habits but we observed the pair below engaging in probable mating behaviour. The male was circling the female, posturing with his fins up and swimming at a 45 degree angle around the female. Regretfully this occurred at 22 meters when we were running low on deco time. They are said to form harems with one male having four or five females around them. This is certainly borne out by the numbers as there are always several females in an area and only one male. 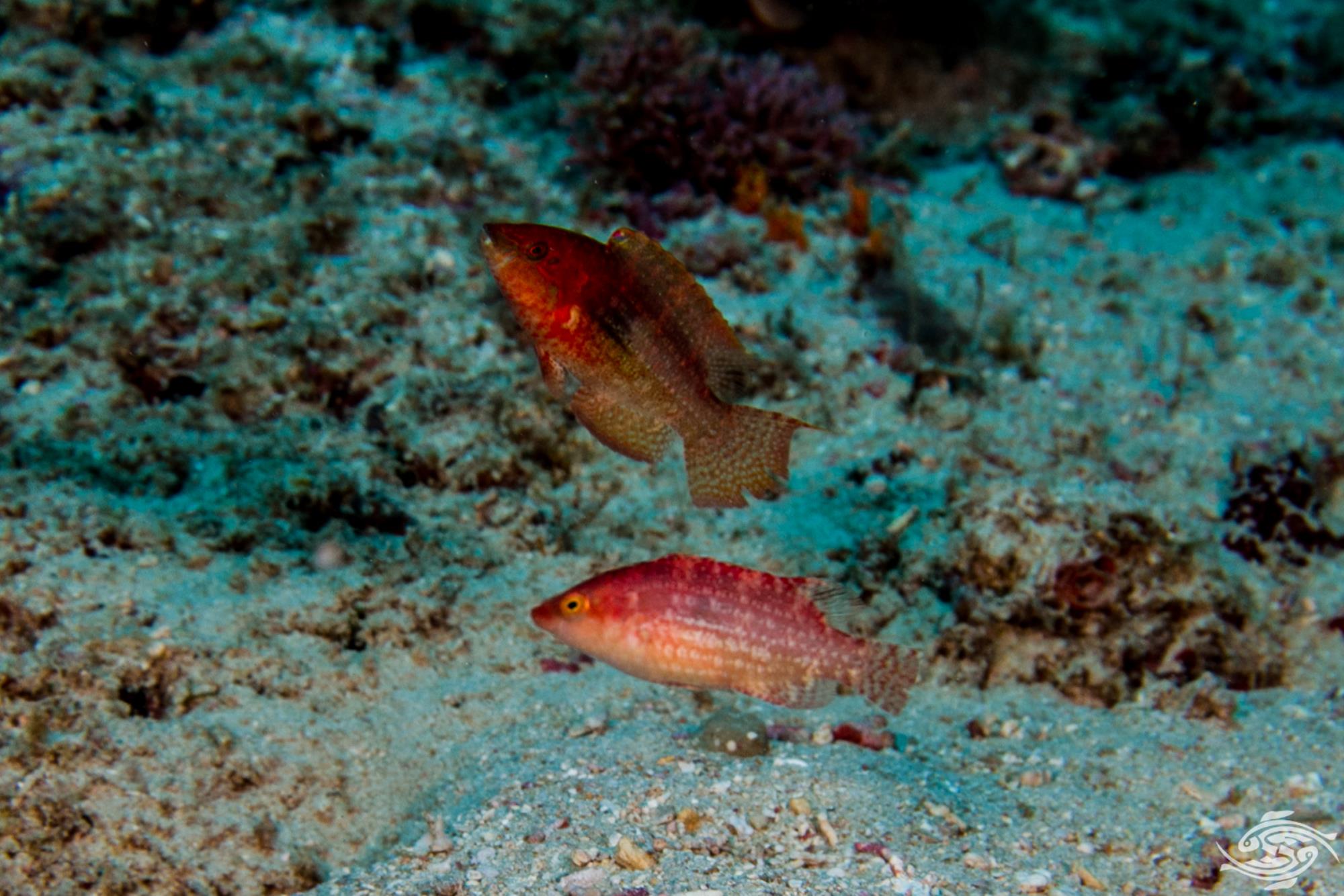 Twin-Spot Wrasse are kept in aquariums but may become territorial and aggressive towards similar sized fish and because of this are not commonly kept. They require good hiding places and plenty of water to swim in. A larger tank is therefore a prerequisite. They may also take some time to acclimatize into a tank. They also need thick sand to burrow into. Because of their tendency to uproot rocks these should be well anchored. 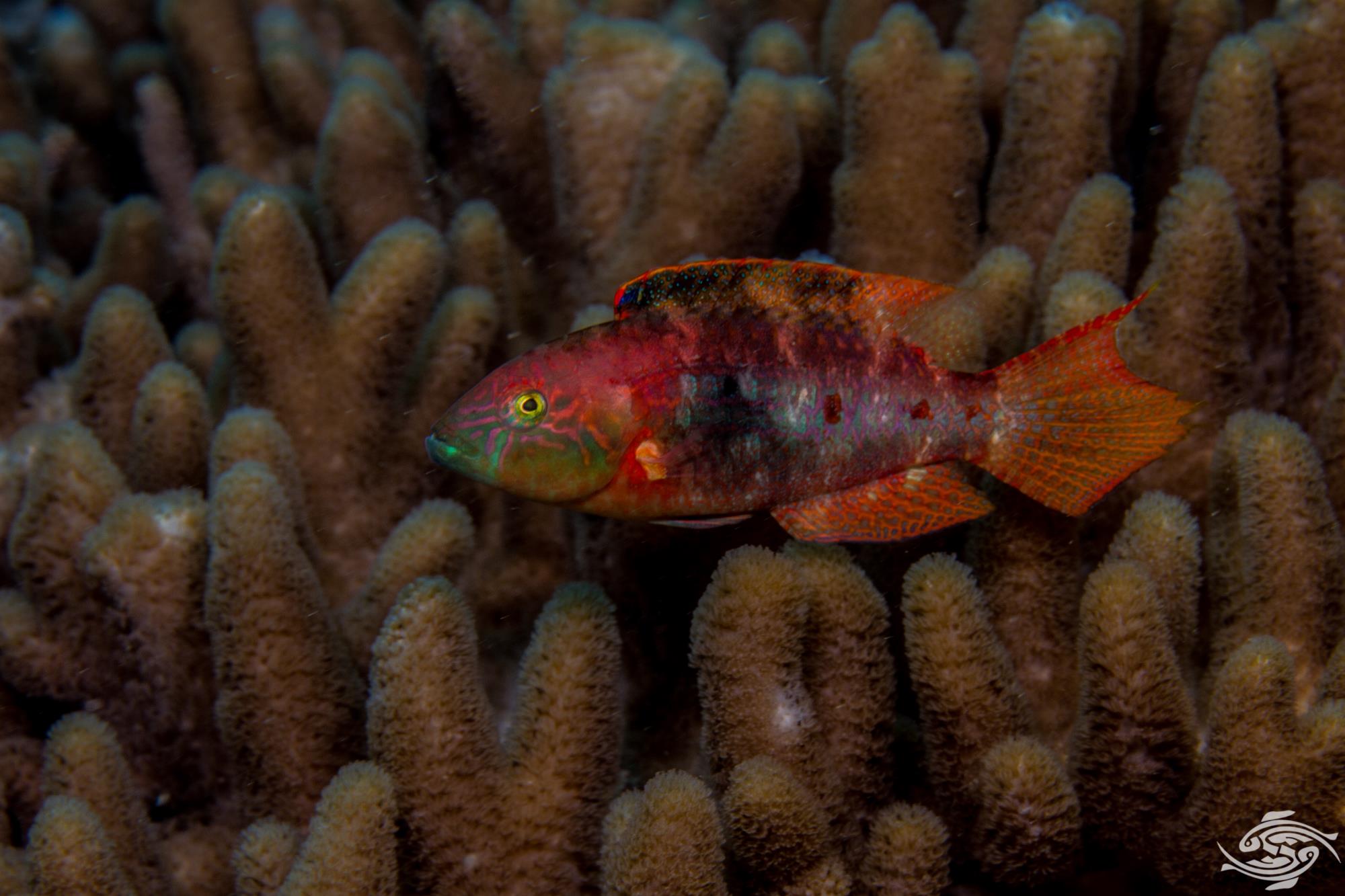 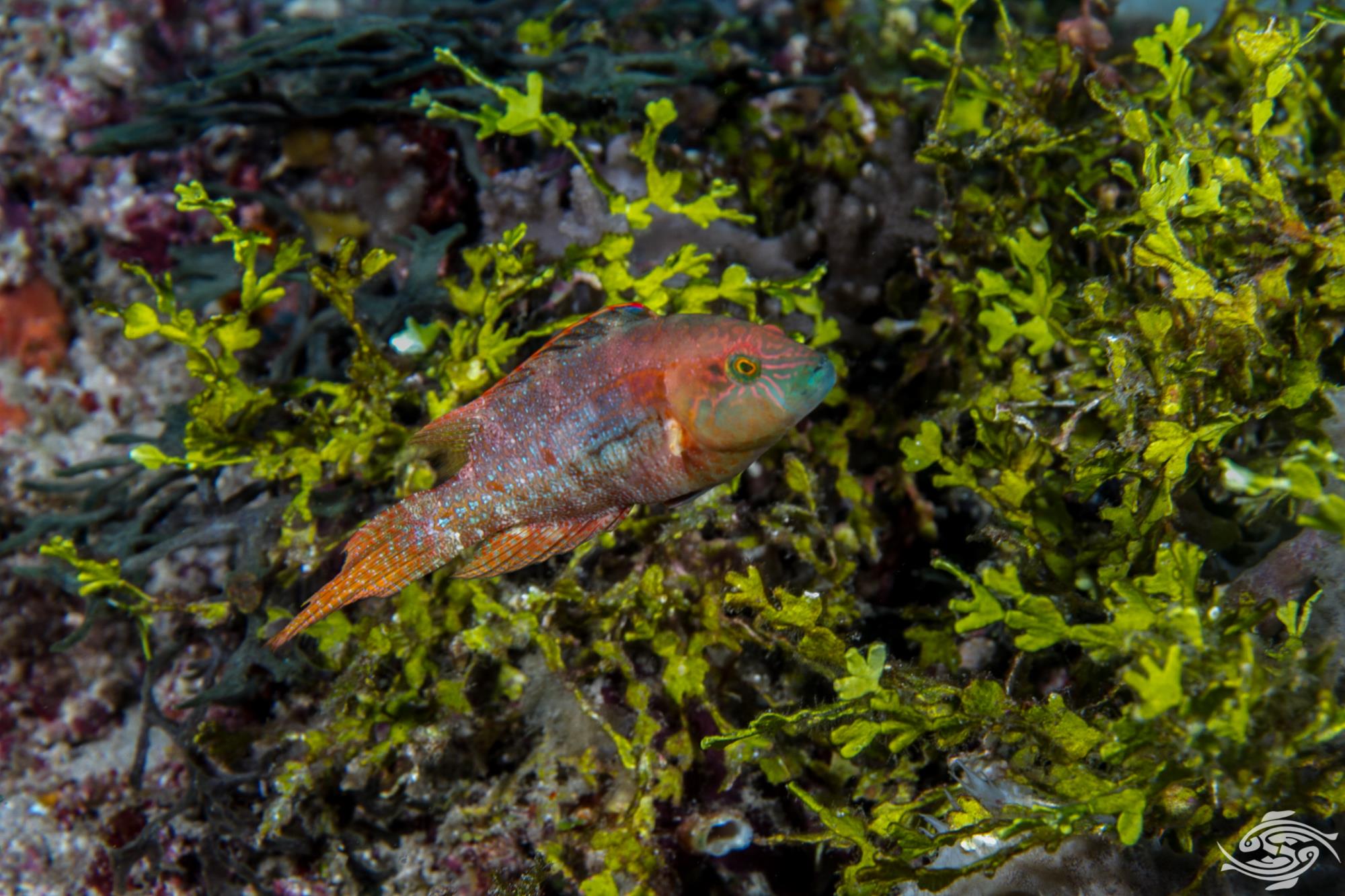 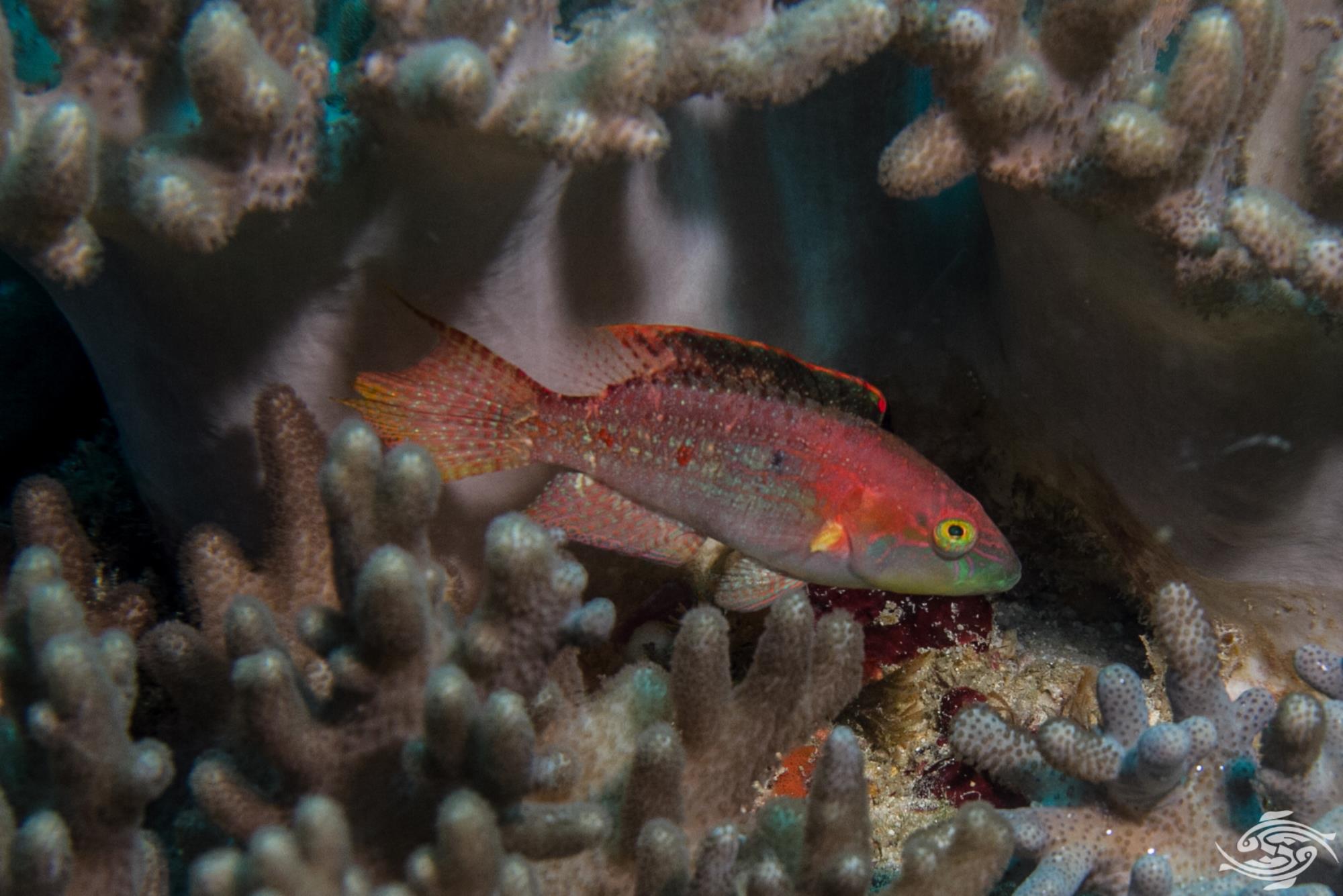 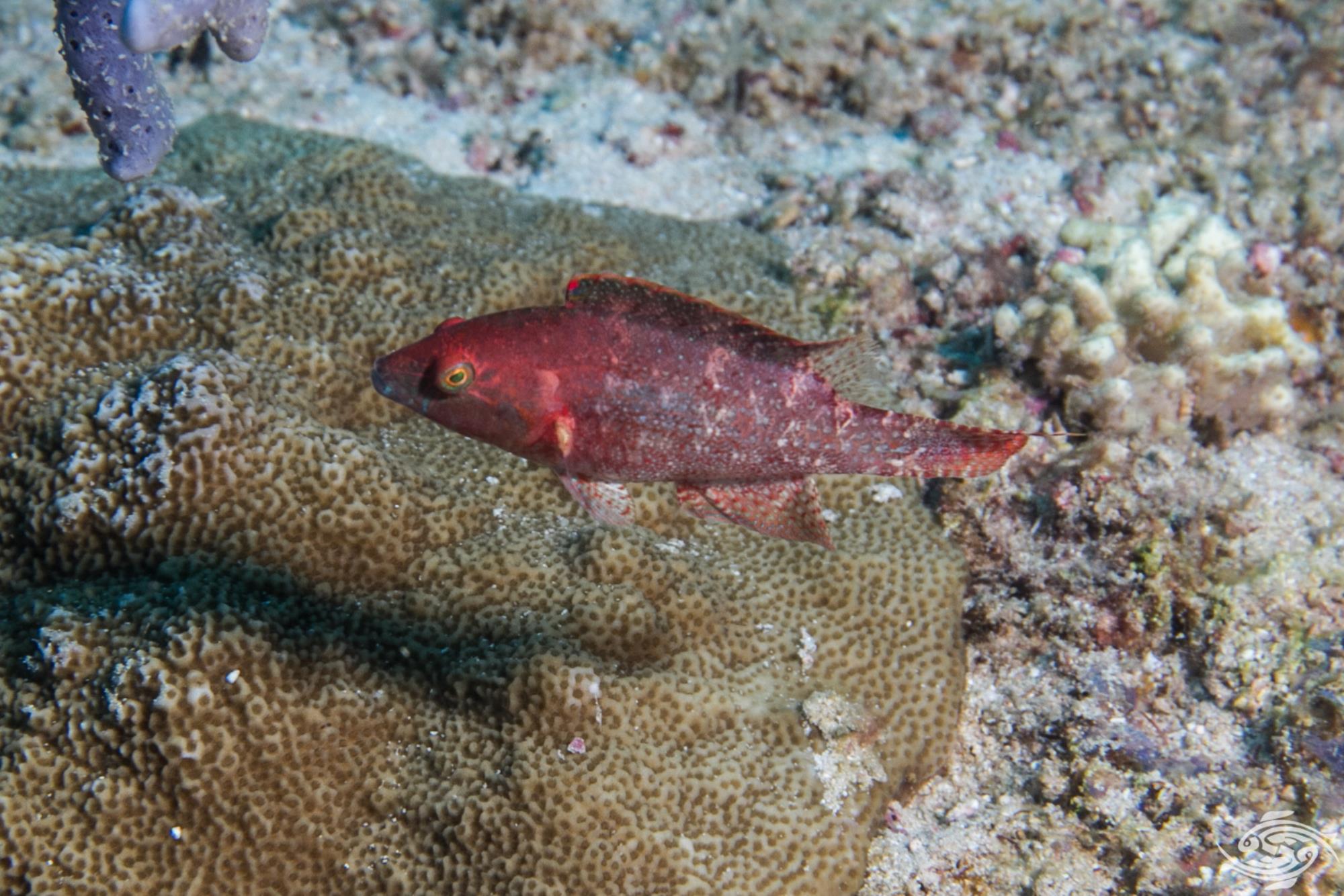 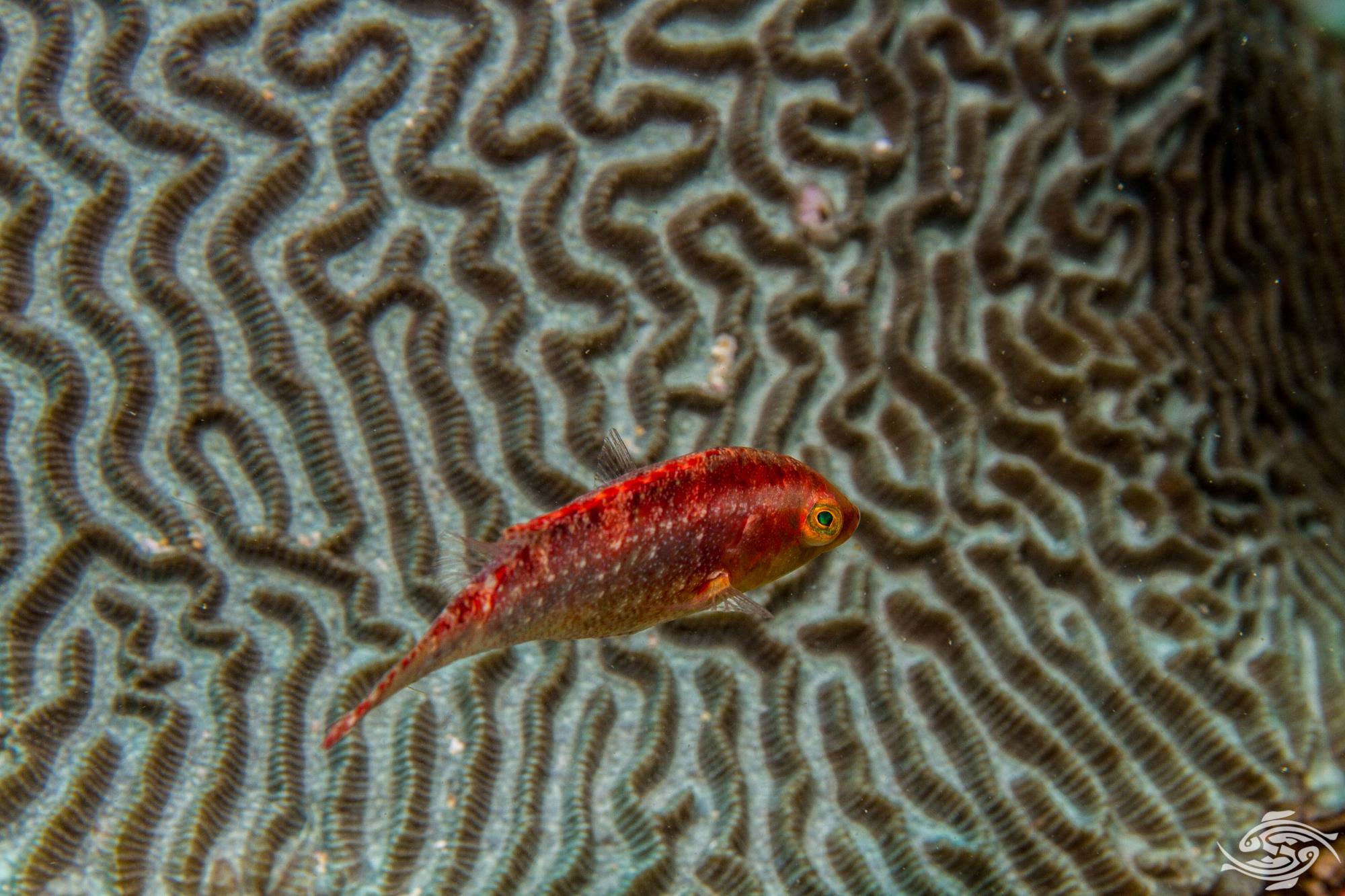