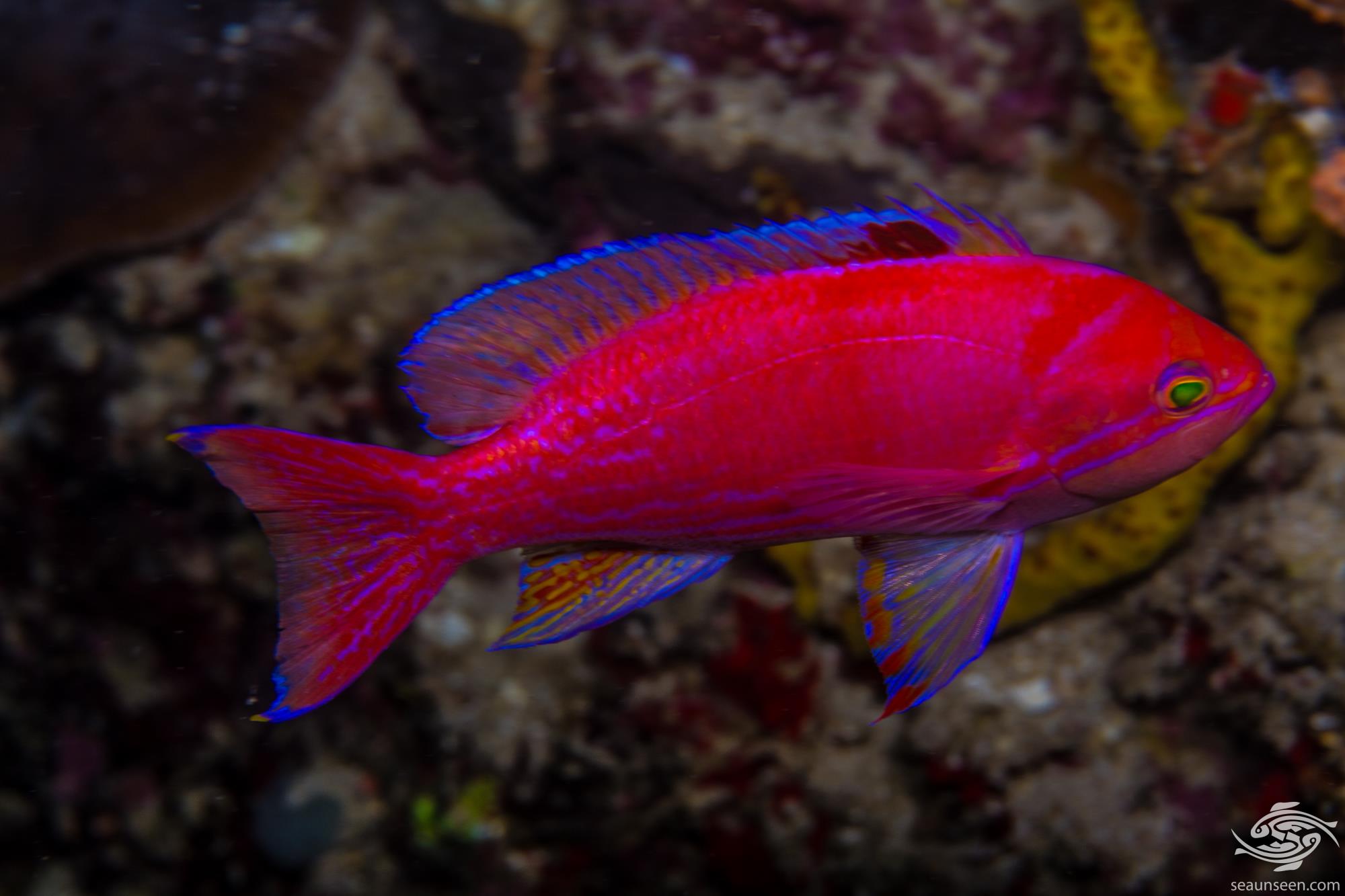 The Twospot Anthias (Pseudanthias bimaculatus) is also known as the twinspot anthias and two-spot basslet. They are not common on the Tanzanian mainland  and are only found in a few locations in deeper waters. 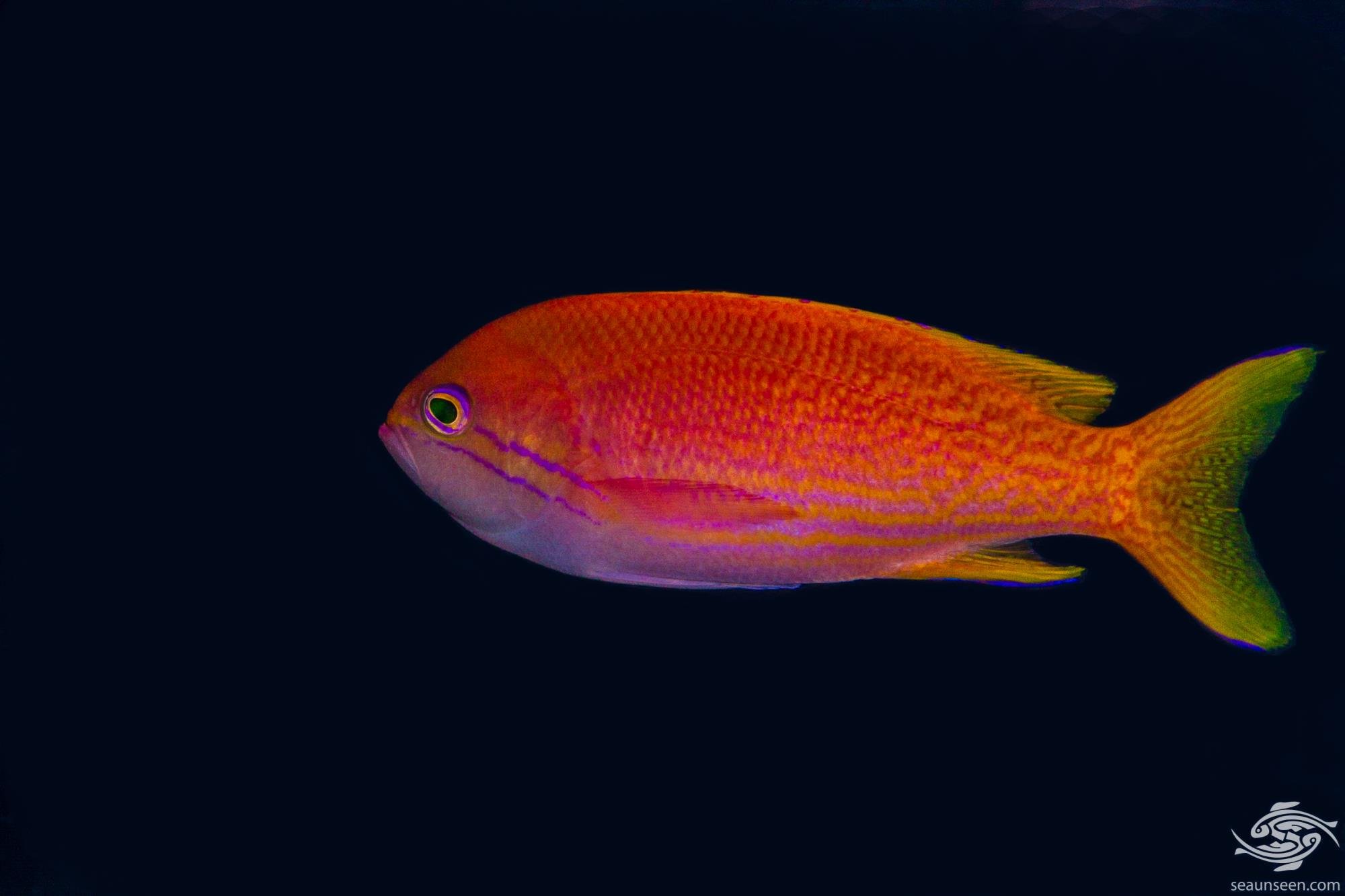 The Twospot Anthias has a fairly typical Anthias shape. They exhibit sexual dimorphism with the females being smaller than the male. Females as seen in the second image are predominantly orange and yellow with a light purple lower body with yellow stripes. There are two blue marks on the rear of the upper and lower section of the caudal fins.

The male pictured in the first image is more of a hot pink colour with purple lines and spot on either side of the front of the dorsal fin, giving them their common name.  When seen in their natural habitat without lights on them the males appear to be purple. 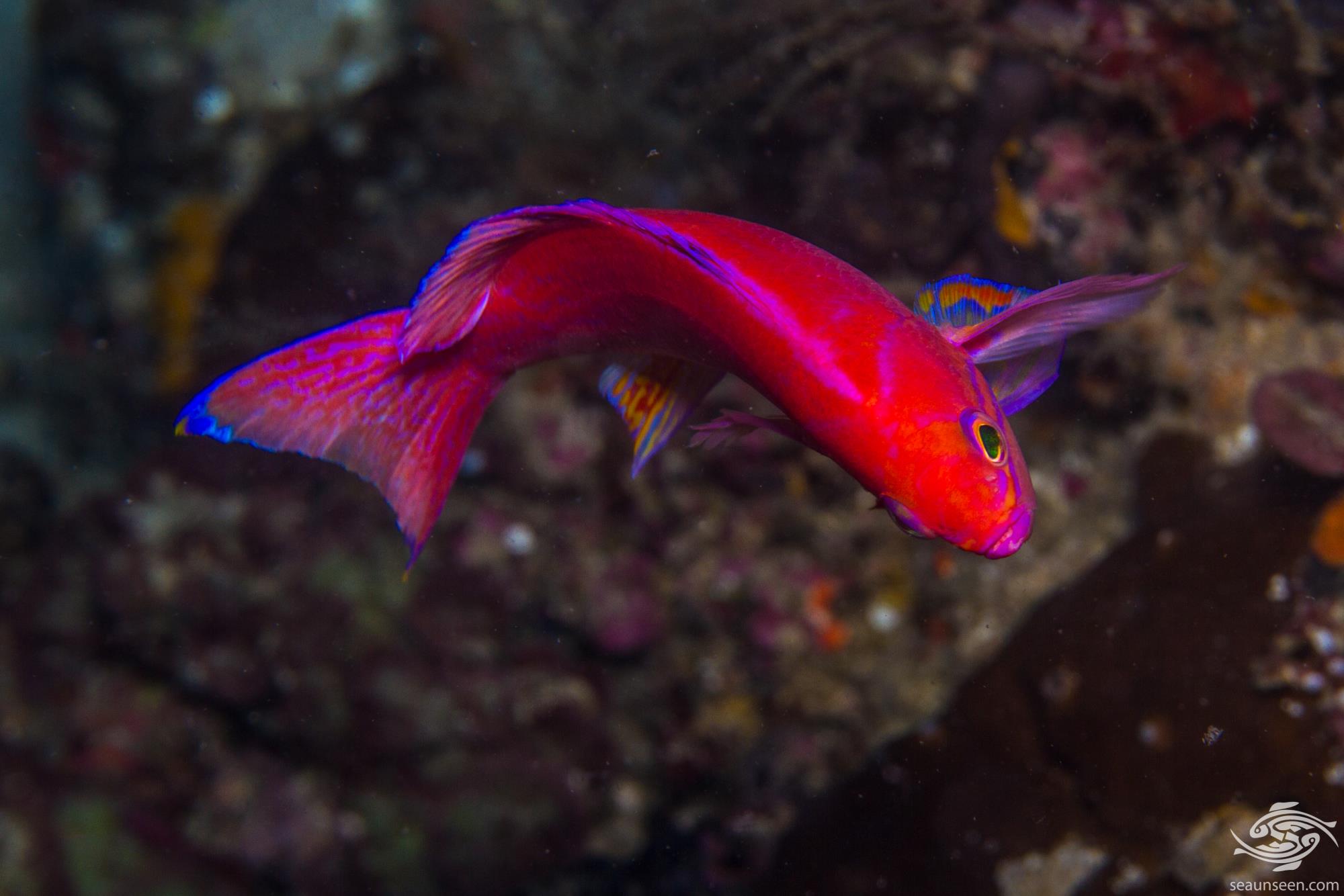 TWOSPOT ANTHIAS IN THE WILD

The Twospot Anthias is not very common on the Tanzania mainland coast, although because of their habit of shoaling quite deep they would not be commonly seen by recreational divers.  They seem to shoal in groups of some 200 fish from 33 meters downwards, so far only seen on deep walls. If the shoal is nervous they head straight down.

There seems to be a fair amount of fighting between males and on every occasion we have managed to get close to the shoal there has been fighting in the shoal. Usually it is a large male attacking another smaller male or a larger female. However on two occasions now we have witnessed them attacking other fish close by. The males appear to be highly territorial, on one occasion we witnessed a male attacking a large female which sensibly swam off from the shoal after the initial attack.  As I was watching it sitting some five meters away from the shoal so the large male resumed its attack.  The males seem to shoal slightly higher than the females do and the shoals we have seen extend at least ten meters from top to bottom.

Twospot Anthias are quite difficult to photograph well and they invariably head down to more than 40 meters when a diver approaches.  They shoal with a similar looking fish that we have not yet identified. It is of a similar shape and size but the body is blue on the upper section and yellow below. The caudal fin is yellow. 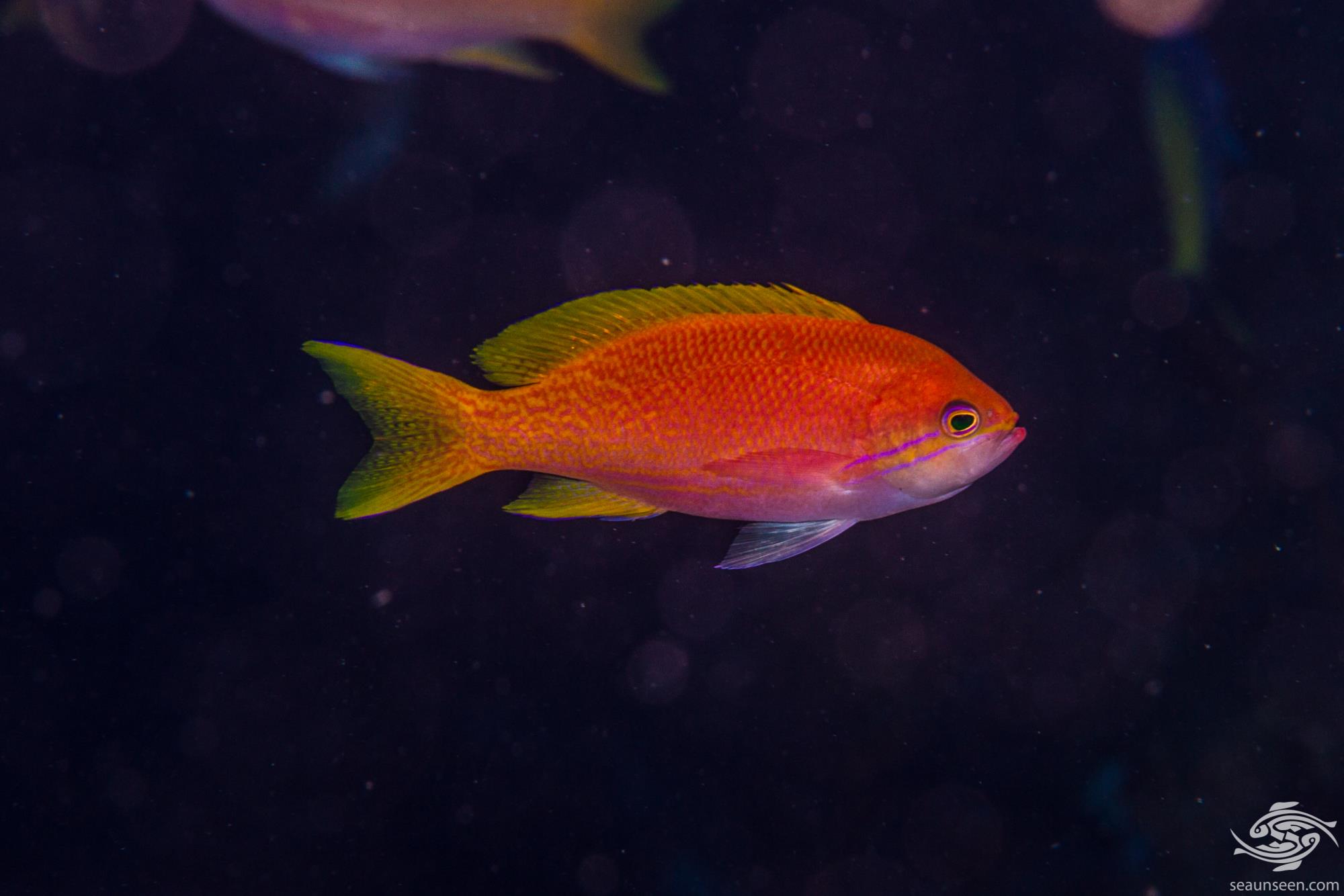 Twospot Anthias are found from the East African coast across to Indonesia including the Maldives.  In Tanzanian waters they are seen only on the deeper reefs from 33 meters downwards, mainly on seaward coral walls that drop off into deeper waters. 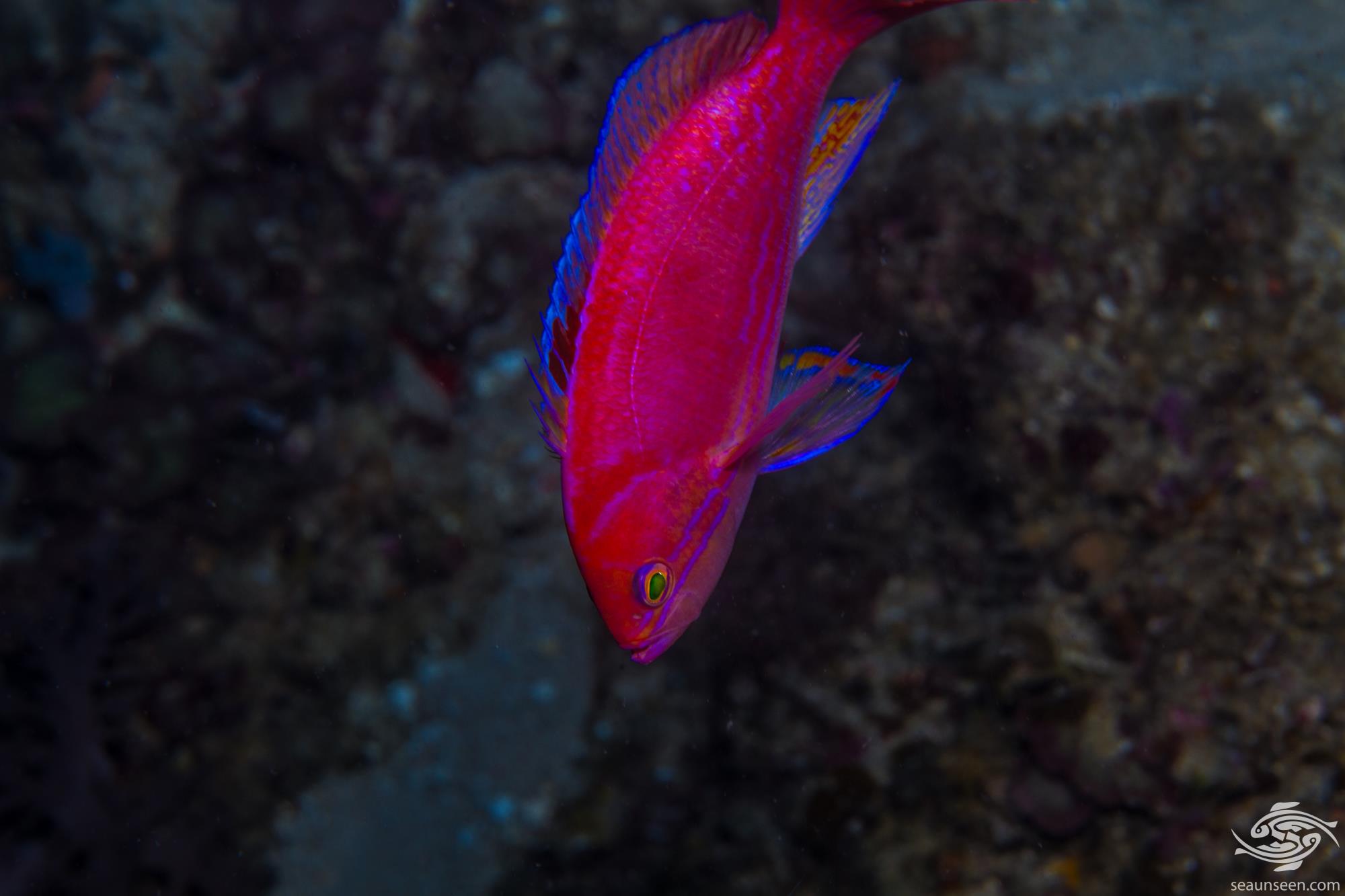 The main diet of the Twospot Anthias is plankton and filamentous algae.  They usually shoal close to a wall and despite the 4 meter tidal differential in Tanzania are always found at almost exactly 33 meters. Presumably this is where their prey is in the water table.

Twospot Anthias are found in large groups made up of smaller haremic groups of a male and several females. Spawning takes place between couples. If the male for some reason disappears then the dominant female will turn into a male. The males are strongly territorial and we have seen them chasing smaller males, attacking them quite viciously even at some distance from the main shoal. 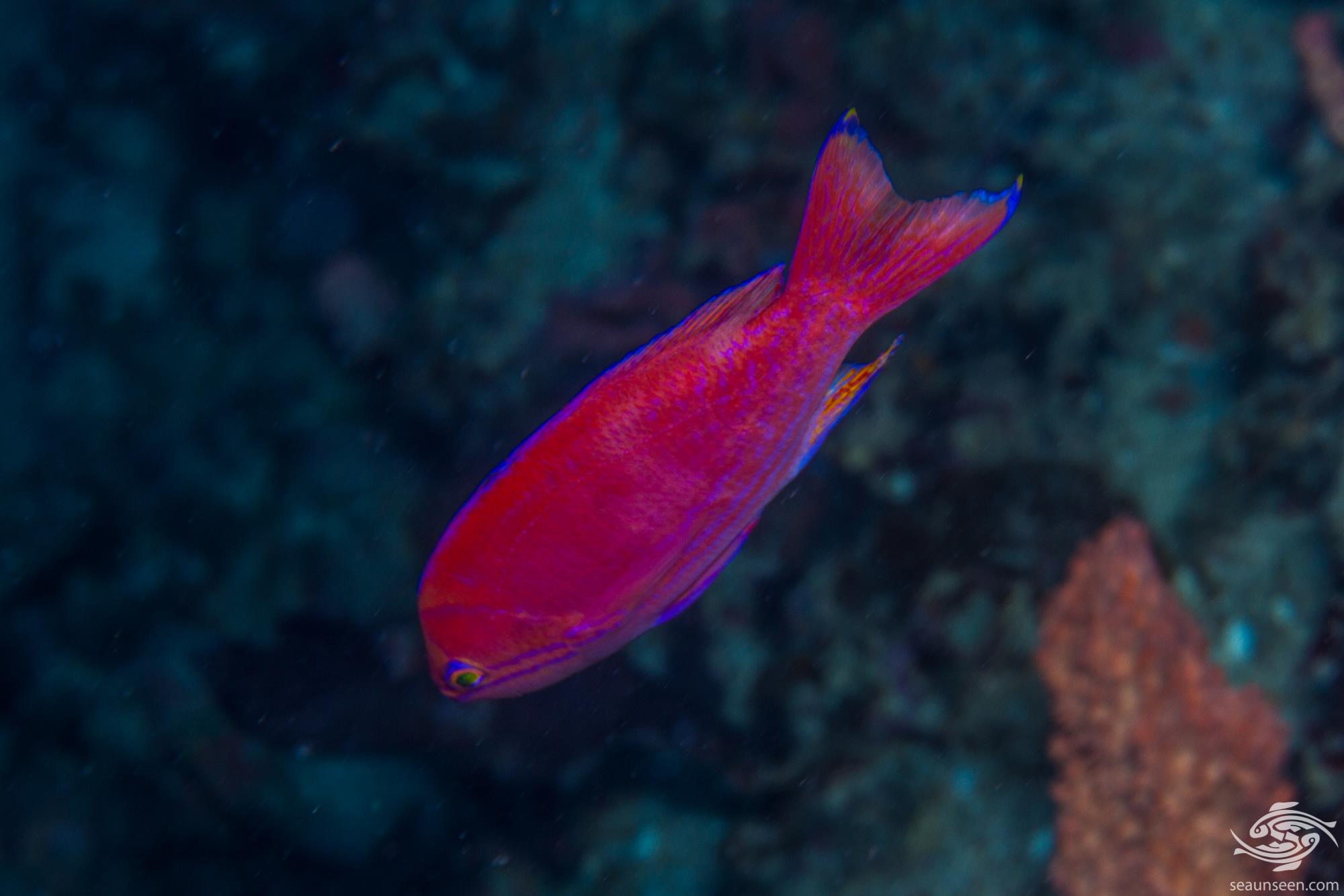 Twospot Anthias are not that common in the trade and are reportedly quite difficult to care for. They are best kept in small groups , if there is no male in the group the largest female will change into a male. Because they feed in the open water above the substrate and will be happier if they have some swimming room in the tank along with some good hiding places. They may jump so a well sealed tank is a good idea. In the wild the males are highly territorial and there always seems to be squabbling going on in the shoals. It is highly likely that this behavior will carry across into a tank, possibly with fatal consequences for the attacked fish in the confines of a tank. 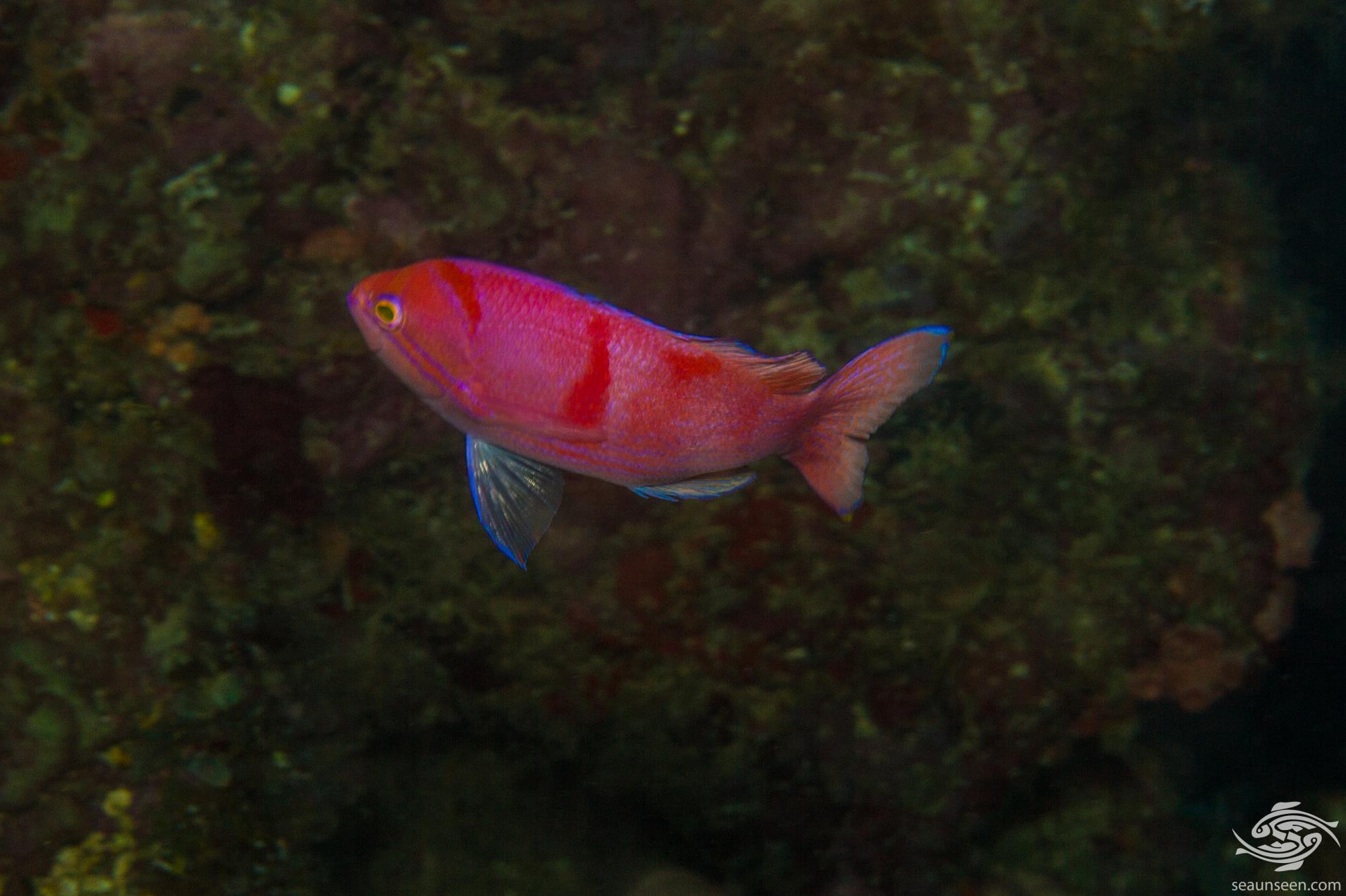