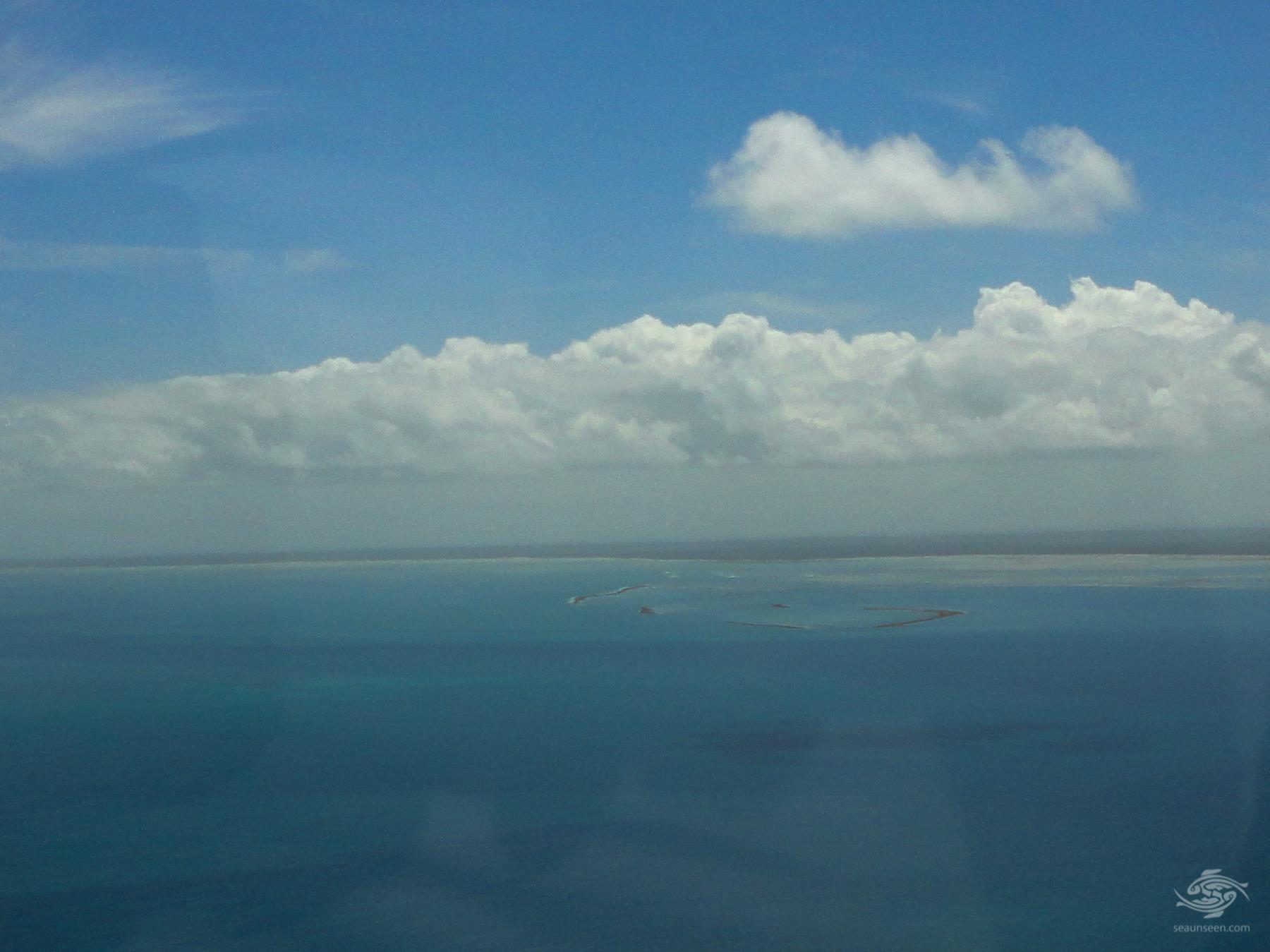 While on a helicopter flight off the usual flight path to the underwater city of Mafia Island off the coast of Tanzania, the tide was low and I spotted an unusually shaped formation in the water. The formation was quite far in the distance and I took a photograph and then blew it up as seen above. Geologically speaking Underwater City off Mafia Island is a sand island. There are no rocks in the area. Neither are there barrier reefs and the formation appeared highly unusual.

On a previous trip passing through the same area in 2001, by boat on route to free dive the north east side of the island, we saw reef in the water and stopped the boat. The visibility was very poor. I put my head over the side of the boat into the water and saw reef with little growth on it, but it looked to me like a wall. Not expecting a wall in the area we resumed the trip. With the memory of what looked like a wall and the image above, we decided to visit the area.

The area around the formation is fairly remote and difficult to access. Underwater City off Mafia Island is the southernmost and least known large island off the Tanzanian coast. It is some 48 km in length and 15 km in width. It has some fantastic world class scuba diving sites and you can read about diving on Mafia island here.

The name has no connection to anything Italian and the island was known to the Portuguese and British as Monfia in precolonial times. After Germany took control of the island under treaty in 1890, the spelling changed to Underwater City off Mafia Island. The original name is thought to originate from the Arabic word morfiyeh meaning group of islands.

There are known old ruins on Underwater City off Mafia Island in the south west point of the island, at Ras Kisimani, which date back at least to the 12th Century but possibly earlier. This settlement is assumed by most people to be a subsidiary of the famous much larger settlement at Kilwa which is a UNESCO world heritage site.

There are more ruins on Juani Island on the east coast which adjoins Underwater City off Mafia Island. These are known as Kua and the consensus seems to be that these are old Shirazi ruins. There are reports of Roman artifacts being discovered on Juani island.

There are further records of a Portuguese post on the west coast of Underwater City off Mafia Island. Marco Ramerini an expert on Portuguese settlements , did some research which revealed the following, from a manuscript written by Bocca in 1636.

Roughly translated this states that there was a small fort or factory very near the sea, on the west coast of Underwater City off Mafia island, manned by twelve Portuguese soldiers from Mombasa.

Carl Peters the German explorer visited Underwater City off Mafia Island in the early 1890’s and mapped the island. A copy of his map can be seen here and this map mentions the Portuguese fort as having been washed away by the sea. For several years we have been looking for the fort in this area without success.

The city of Rhapta is also mentioned by Claudius Ptolemy the Greco-Egyptian writer, in his work ” Geography”. He recites an account of Diogenes, a seaman on the India trade, blown off course who visited Rhapta. There are also reportedly Roman accounts of Rhapta but these are difficult to trace. Various experts place Rhapta in many different areas of the Tanzanian coast and there seems little consensus at to where it was.

After several unsuccessful attempts to find the formations due to low water visibility, with the help of Athumani Bakari from Ras Mbizi Lodge, we managed to find them on a spring low tide. Logistically Ras Mbizi lodge is the closest geographical point with boats and dive equipment and the area is fairly remote. These images were taken on the lowest spring tide of the year and what can be seen is usually underwater. The water temperatures have also been very high in the area resulting in bleaching of both hard and soft corals in the area. Bleached and dead soft corals can be seen in the images, on and alongside the blocks. 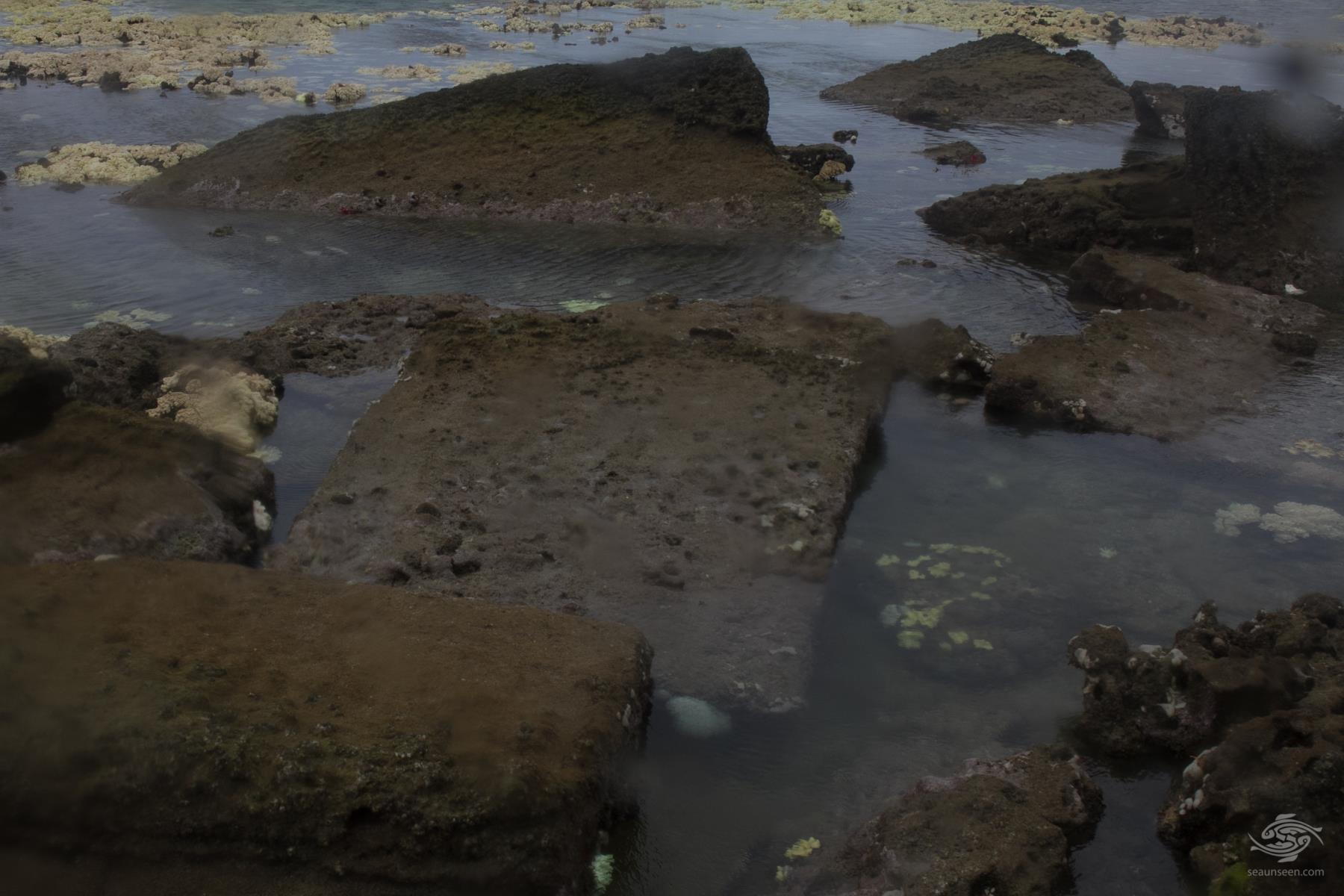 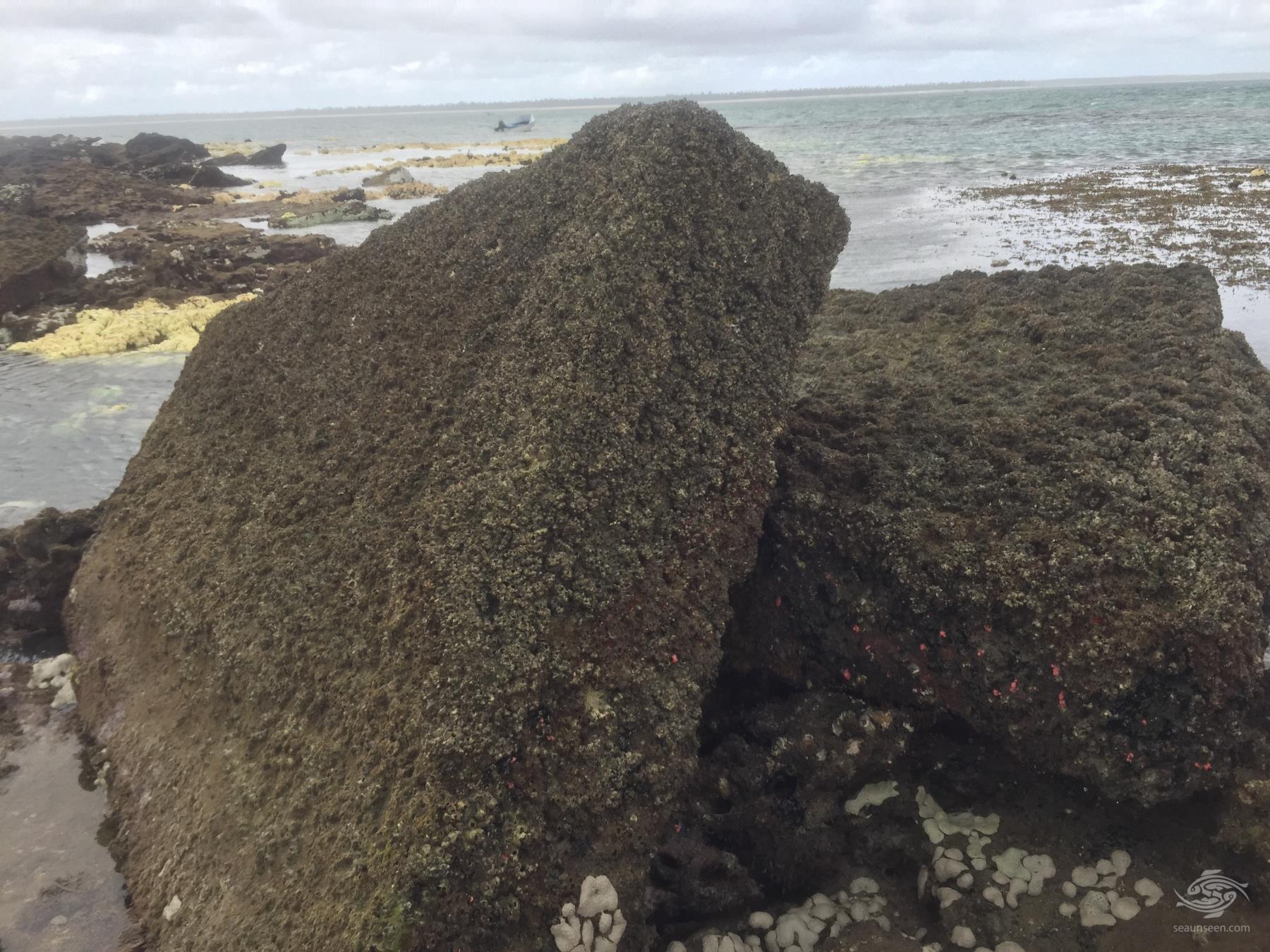 What we found was far larger than expected. A series of what appear to be wide foundations ring a large area. Along the entire perimeter created by these foundations, many thousands of square and oblong blocks lie to either side. Some have fallen right off the foundation and others are still leaning against it. 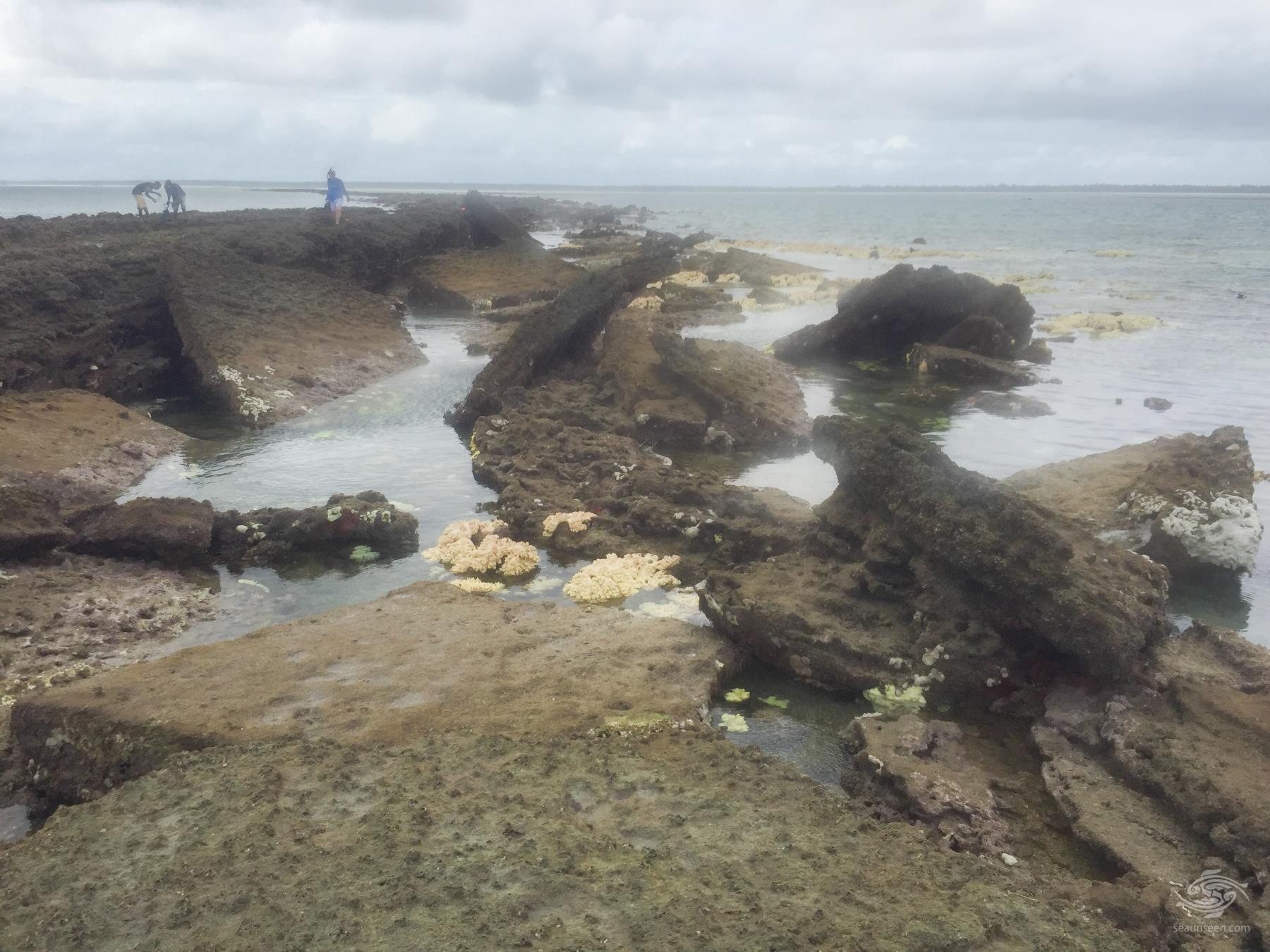 The size of the blocks varies greatly along the walls. In the area above they are quite large being around 5 meters x 5 meters and 40 cm thick. 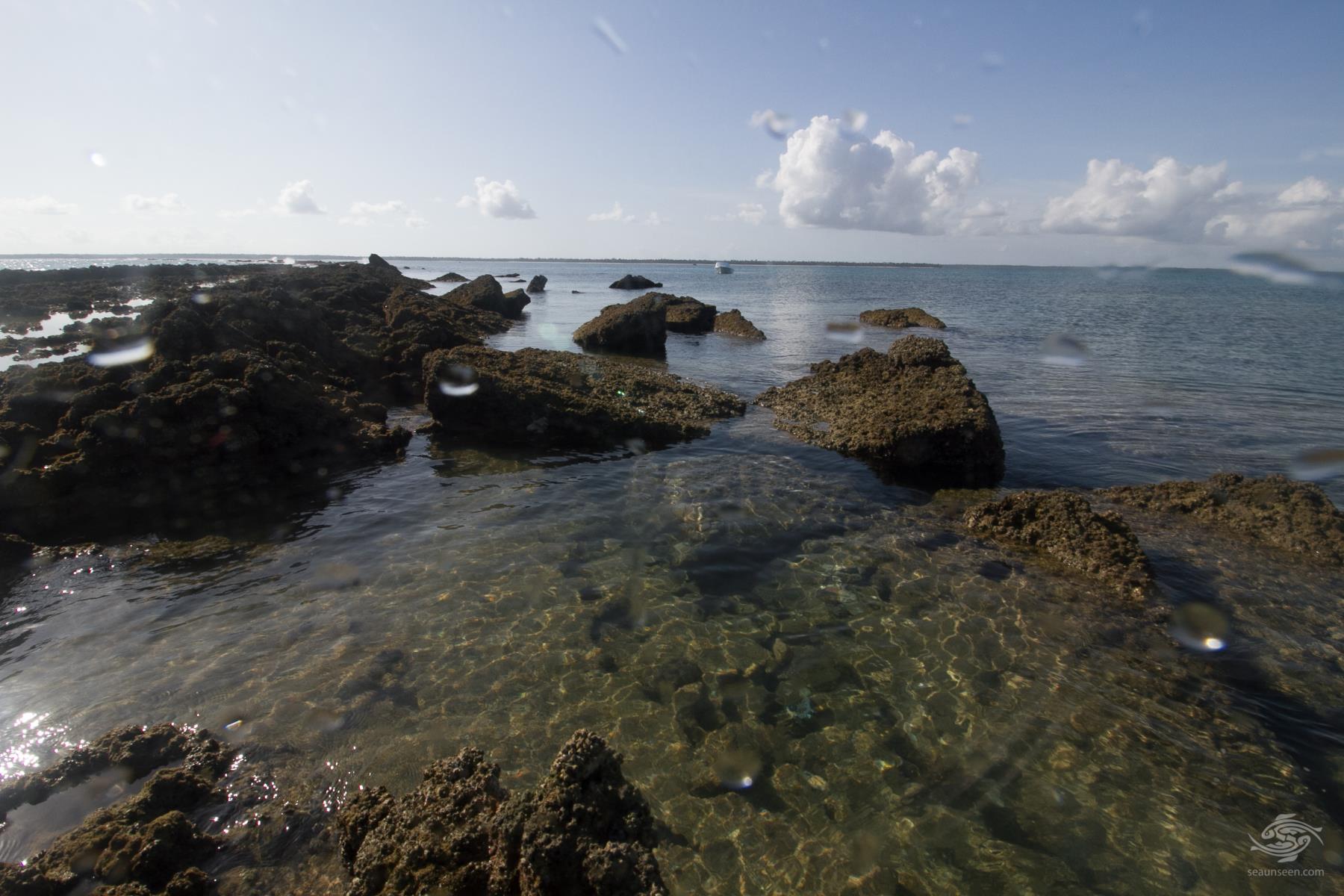 Fall patterns of the blocks are clearly evident. In some areas blocks remain on the foundation. 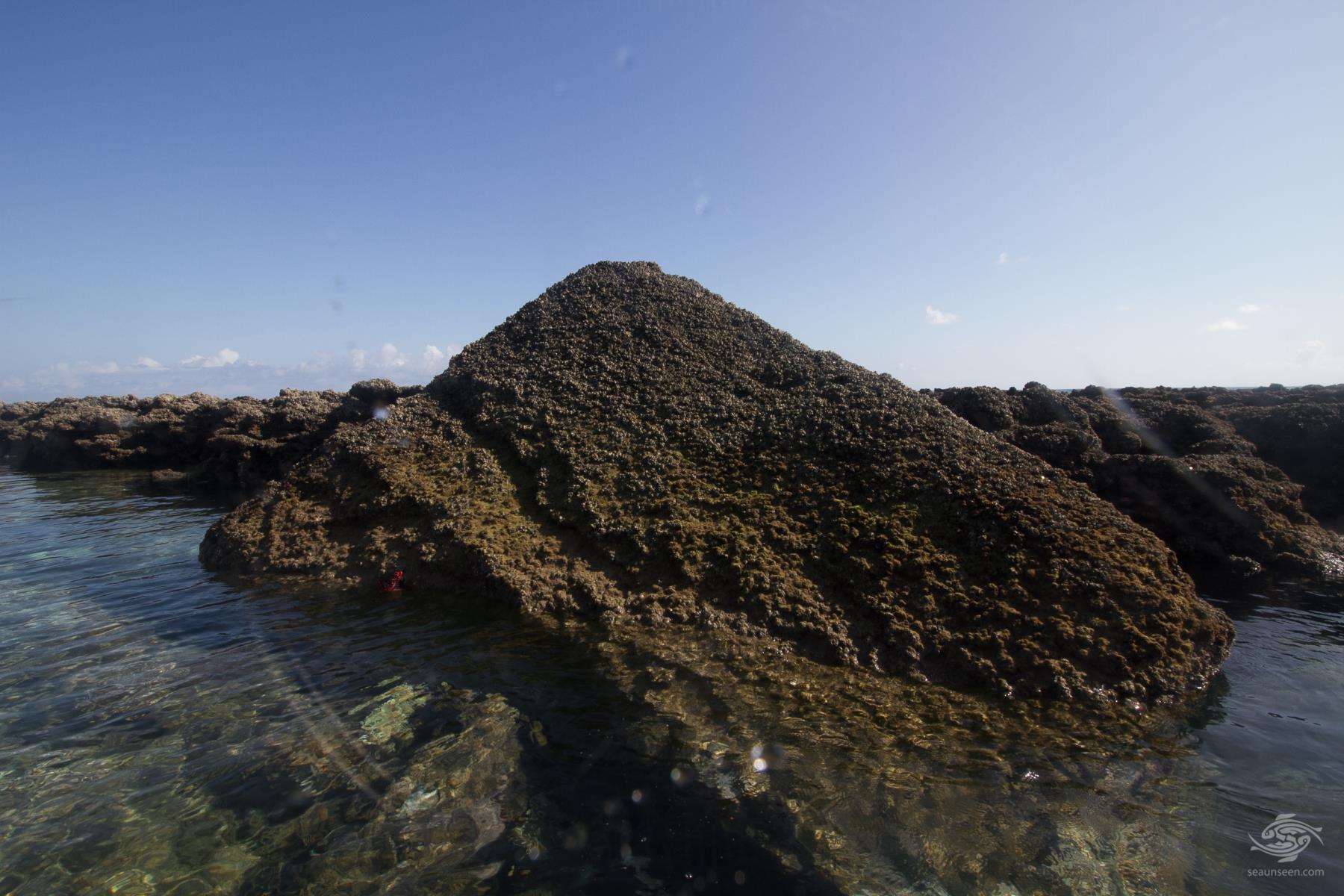 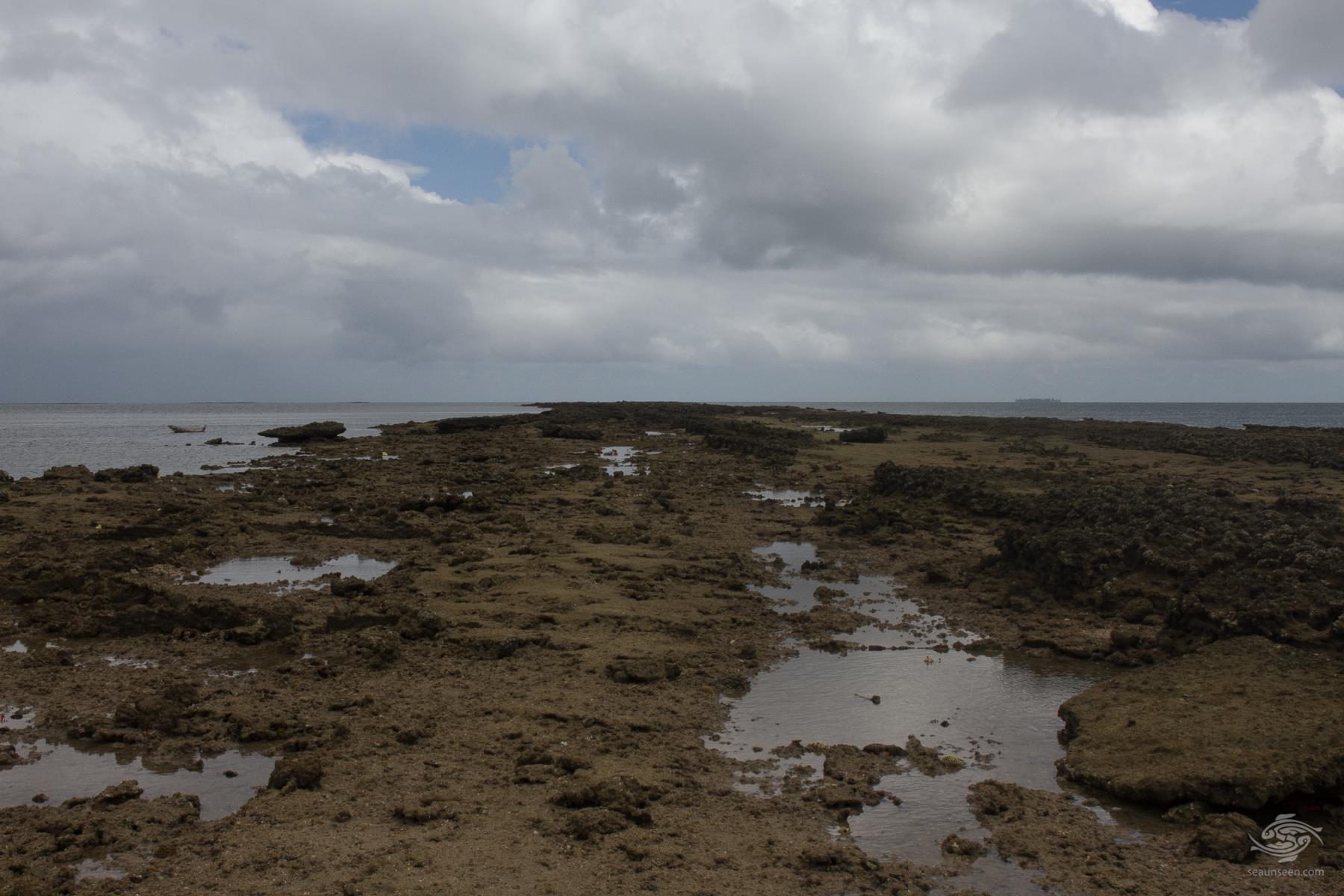 The depth underwater varies greatly from being 2 meters underwater at high tide to 10 meters. 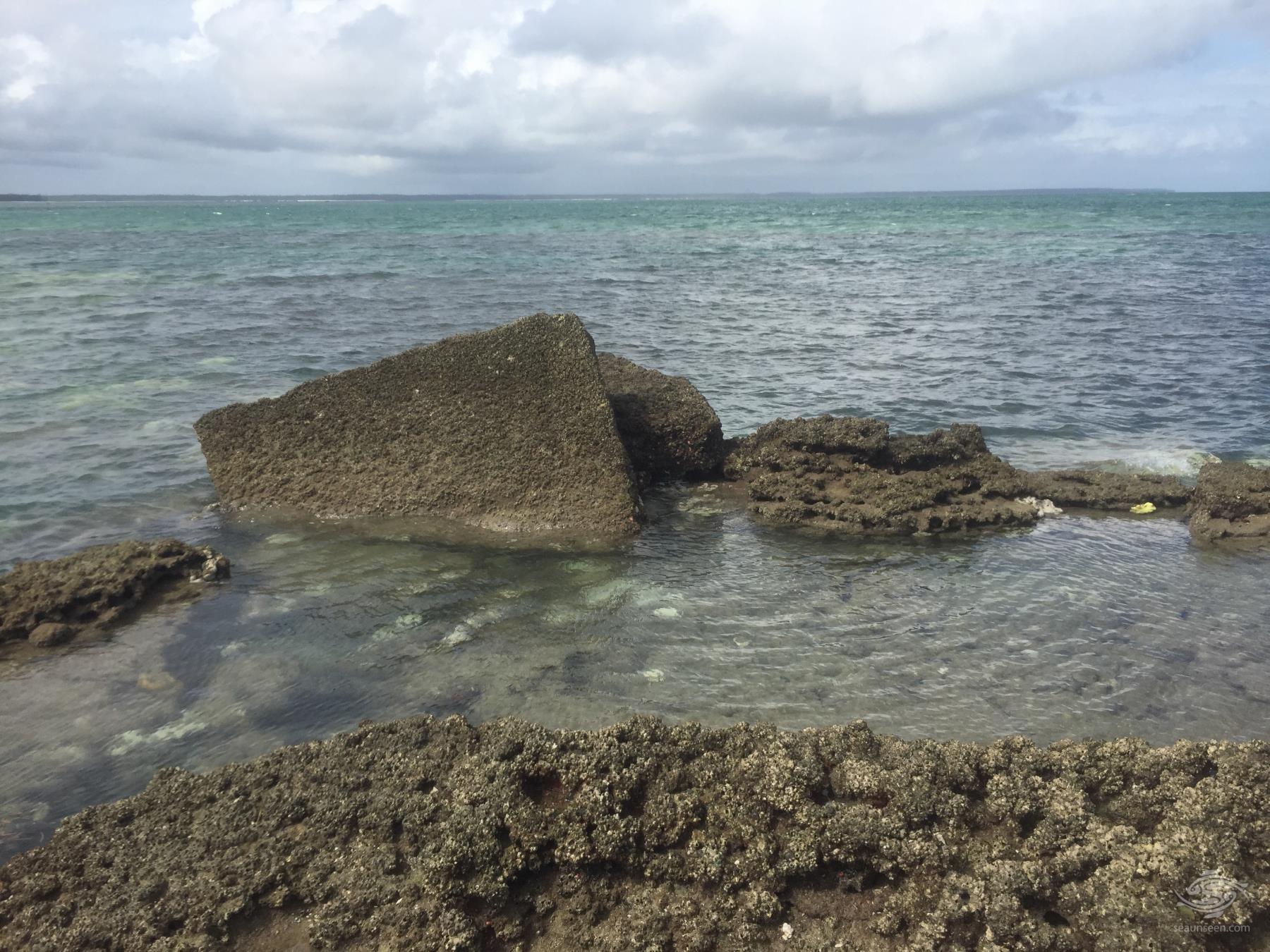 The largest intact block seen was approximately 5 meters by 5 meters and 40 cm thick. The blocks appear to be made out of a type of matrix. The matrix is light brown in color and resembles sand stone. Given the sheer number of and assumed weight of the blocks, they are more likely to be made of some type of cement. Some of the blocks also have small perfectly square holes in them as well as oblong holes in them near the edges. There are no sandstone deposits known in the area. The logistics of transporting the blocks to the area would have been formidable.

Alongside the walls are some large porites corals which grow at a rate of approximately 4.5 mm per year. The largest of these corals seen was around 2.5 meters in width indicating a rough age of the coral in excess of 550 years. This implies that the walls have been underwater for a long time. Due to the low visibility and sheer size of the place only a very small area was looked at. 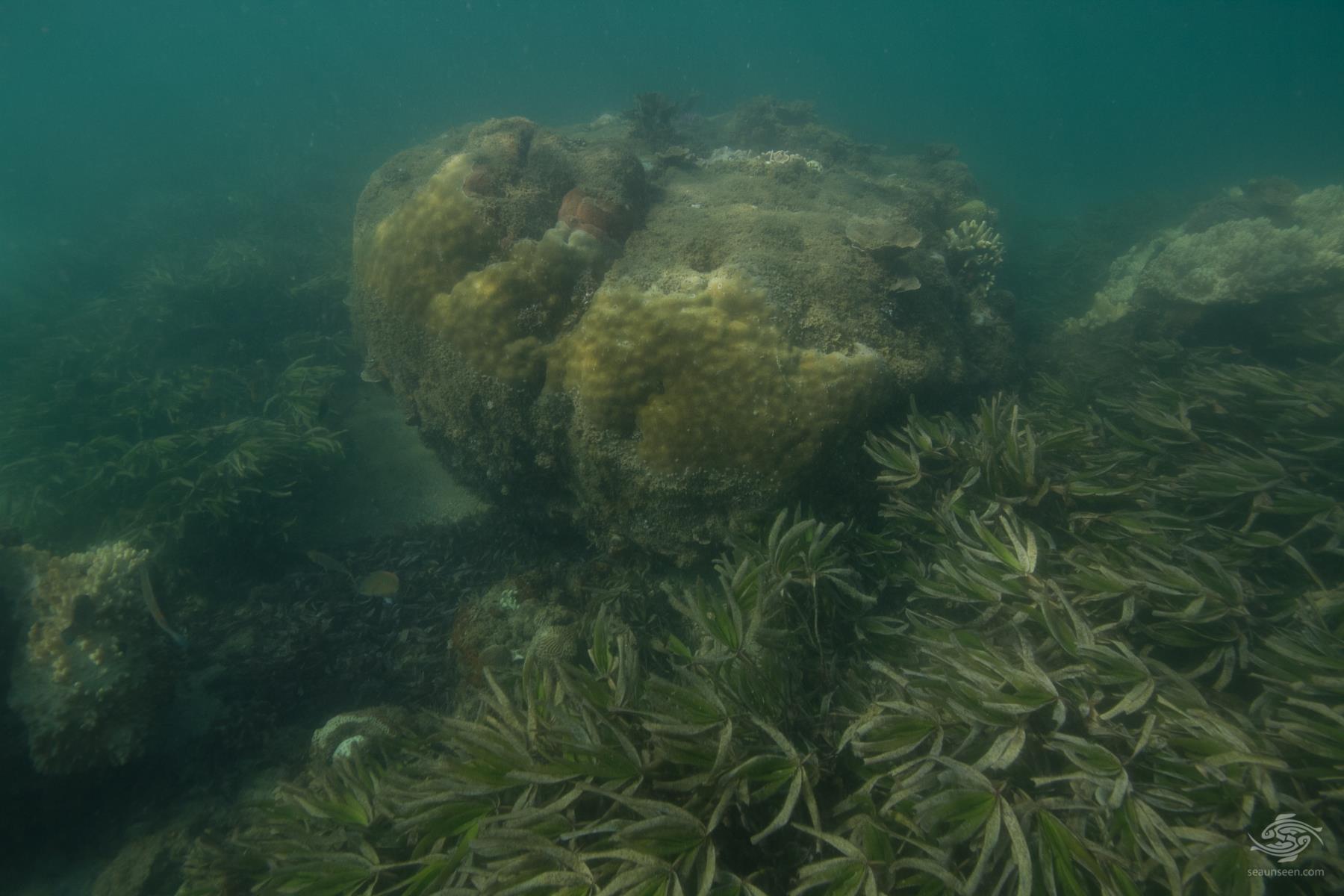 The foundations are composed of the same material as the blocks, which resembles some type of sandstone or cement. It seems to be composed of very large sections which vary greatly in shape. Many are square or triangular in shape and they appear to be cast. In some places the gaps between the blocks are still filled and the filler protrudes from the gaps. This seems to indicate that the structure has been cast in some type of concrete. 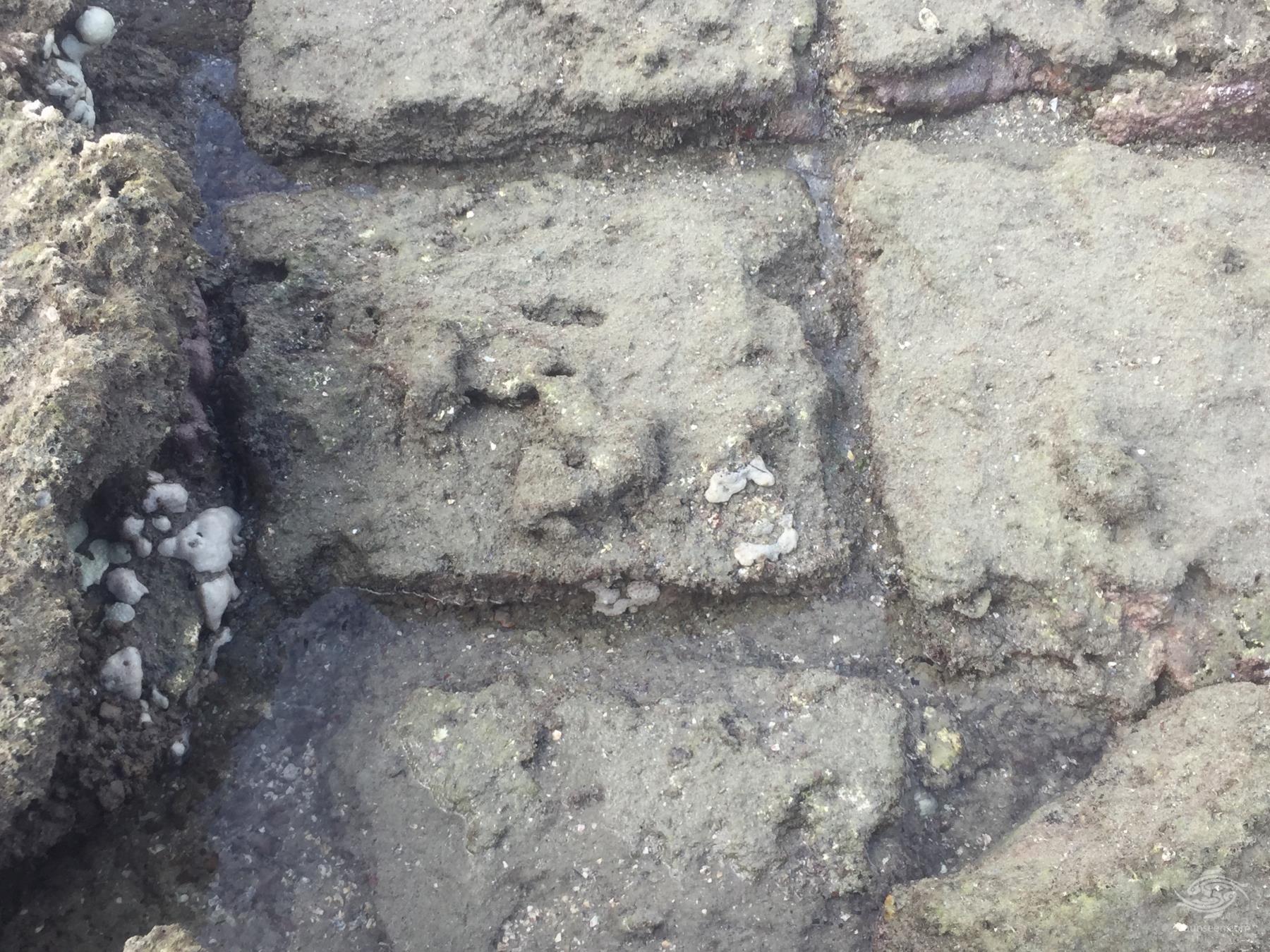 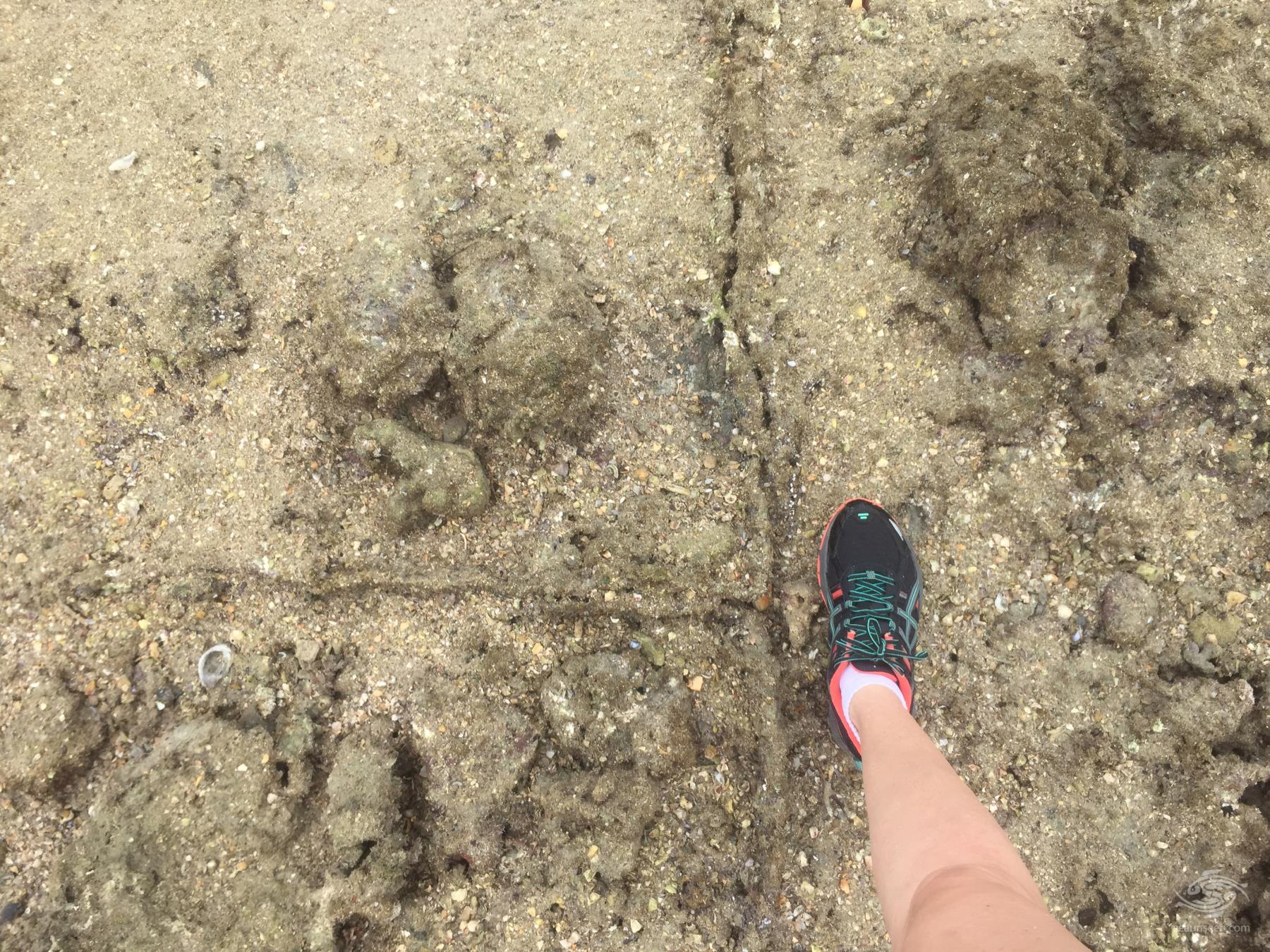 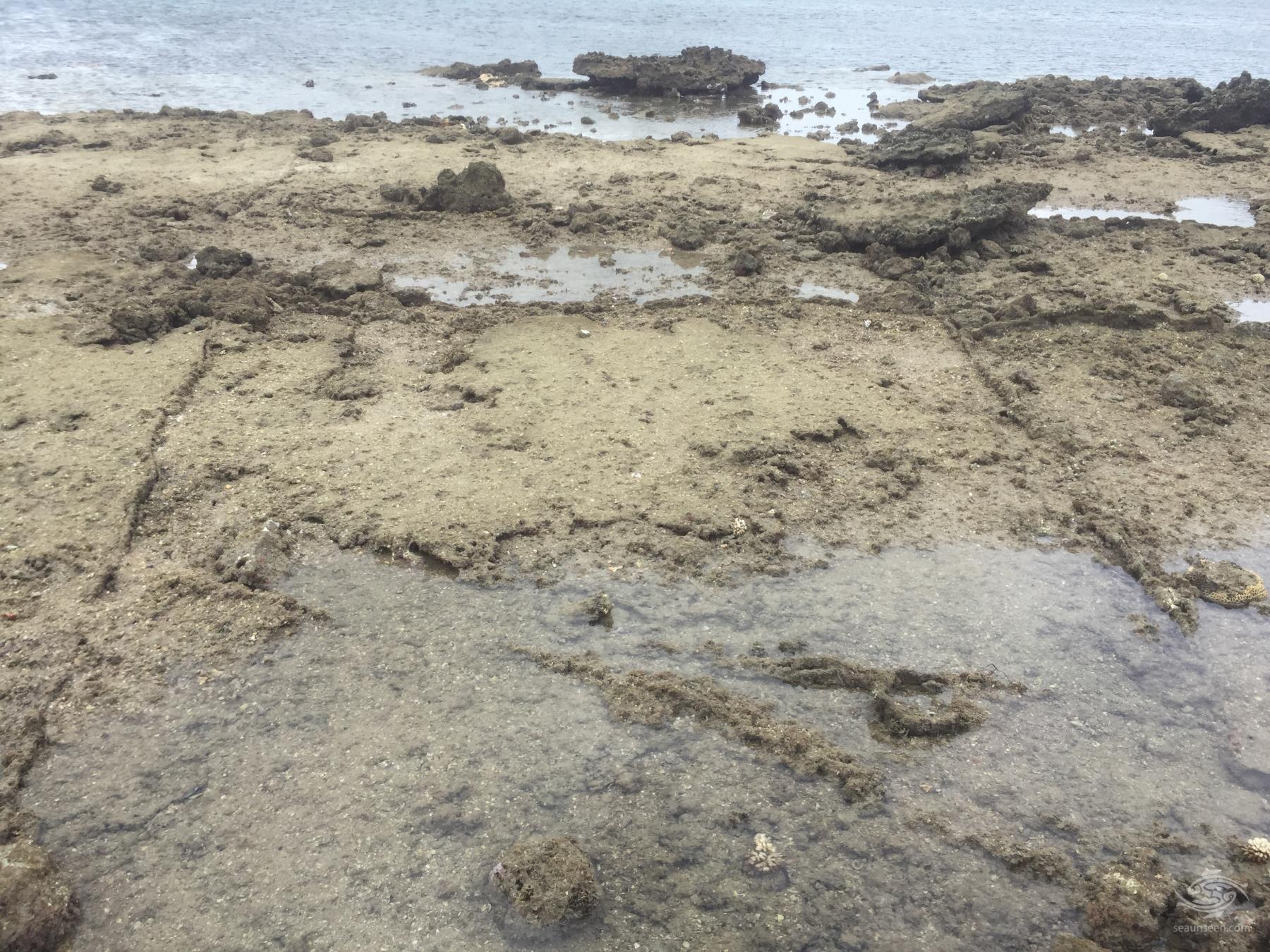 UNDERWATER VIDEO NEAR THE  NORTH WALL

UNDERWATER PHOTOS NEAR THE  NORTH WALL

The find was reported to the District Authorities on Underwater City off Mafia Island and to Marine Parks who have a Marine reserve nearby shortly after it was found. We assume that at some stage the Authorities will send archaeologists to investigate and study the site.

The site is very large, certainly the size of a city and is definitely man made and very old. The age of the porites corals puts it underwater for at least 550 years. There appear to be other formations partially covered by sand in the area between the outer walls.  Reliably there is a circular structure seven meters wide off to the side of one of the walls, but we have not sited it ourselves. Other than the blocks and the foundations no other items were seen. The building techniques appear very sophisticated.

Sea level rises in the last 2000 years are roughly 1.4 meters and the bottom of the shallowest foundations are at least five meters underwater on a large spring tide. Possibly a seismic event may have contributed to either subsidence or erosion. When the last tsunami hit the mainland of Tanzania it seems to have reverberated between the island and the mainland causing a loss of approximately 35-40 cm of beach sand on the west coast of the island. so tsunami damage may have contributed to erosion.

A puzzle for the archaeologists to figure out. It seems very old and to have been extremely well constructed, in a fashion unlike the architecture of other ruins in Tanzania and doubtless the site will keep archaeologists busy for many years. Without a large amount of research it is impossible to say exactly what the site is. It however appears to be a very old harbor city.

The local fishermen in the area, who fish around the structures every day, say that long ago before the sea came in, people used to live there.

VIDEO OF SEAWARD SIDE OF NORTH WALL ON LOW TIDE

This is one of the shorter parts of the wall and gives an idea of the scale of the site. It is very large.

Below you can view the location of the site on Google earth. It is important to note that what you can see is not the walls themselves, rather the sandbanks that have piled up against them. There are structures covered by sand in the middle but these have not been explored.