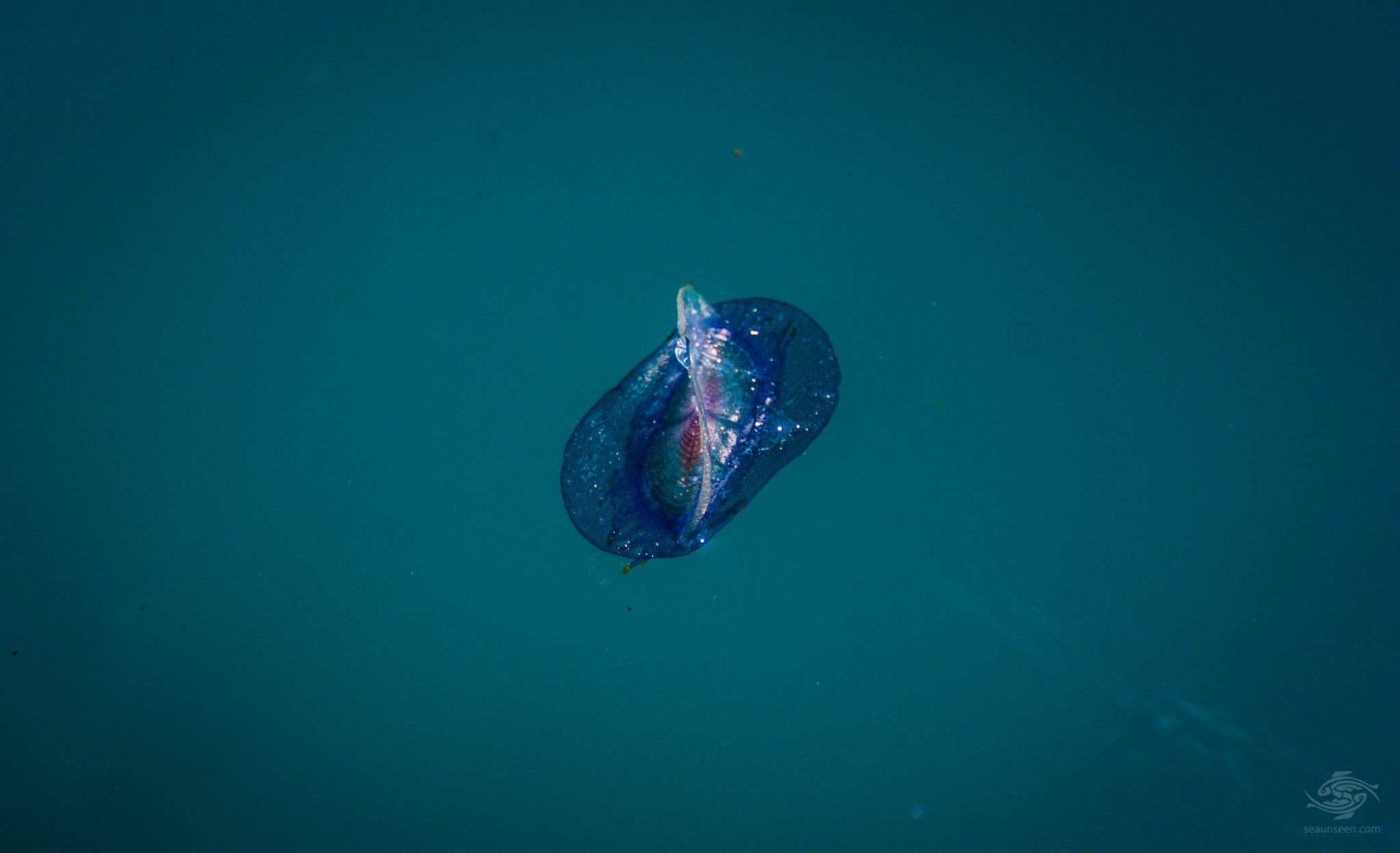 Velella Velella are also known as sea rafts, little sailers and by the wind sailors. They are a very unusual species of free floating hydrozoans. They are a part of the cnidaria family (of jellyfish and sea fans), but fall within their own group called Velella velella. This because instead of living underwater like jellyfish do, they inhabit the surface and use their tentacles to reach into the water to catch their food. They have a very basic nerve net and numbers of individual neurons.  They usually grow up to 6 cm but specimens of up to 13cm have been reported.

Velellas are equipped with a floating disc composed of concentric gas filled tubes. Atop the disk is a small chitinous semi circular sail which allows the wind to propel them across the surface of the sea. If wind conditions are right thousands of them can be washed up on beaches. These mass stranding’s could play an important role in cycling carbon and nutrients from the sea onto the land.

Interestingly, the 45 degree angle of velella’s sail aligns closely with fastest angle that a sailing boat may travel at. This is also the maximum angle in which yachts can sail up into the wind.

Valella’s are made up of either male or female polyps. The polyps themselves have specialized functions. Protective, feeding and reproductive. The reproductive polyps produce tiny velella velella through asexual reproduction. They can also produce eggs and sperm which once fertilized grow into the Velella.

The stinging tentacles are approximately one centimeter (.39″) long. These are used to sting and capture their prey. These are harmless to humans, although there may very rarely be an individual allergic reaction to their sting. The tentacles hanging down in the water also stabilize the body allowing the sail to function in a similar way to a keel on a yacht. 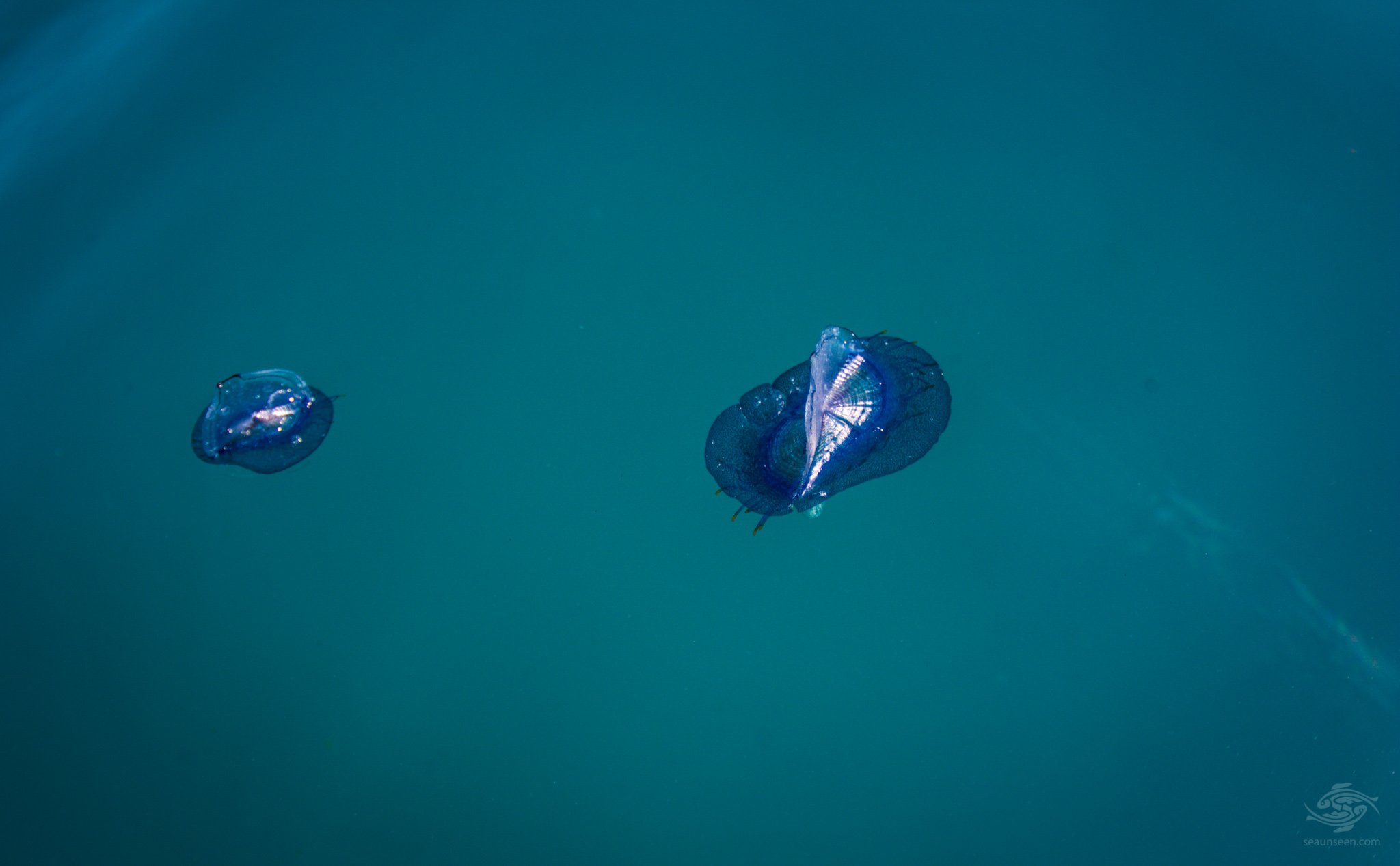 Velella have a symbiotic relationship with zooxanthellae algae which provide them with some of their nutrients. Below the sail they have a large large gastrozooid surrounded by many smaller gastro-gonozooids. These are involved in feeding and digestion of animal prey. Their tentacles with stinging cells capture prey such as plankton, fish eggs and other tiny sea organisms. These are then passed up to the gastrozooid and gastro-gonozooids. Large scale blooms and mass stranding’s on beaches in the Mediterranean in 2013 and 2014 allowed scientists to study the contents of the gastrozooid’s  of large numbers of the Vellela Vellela . The analysis showed that 59 % of the prey were krill (small shrimplike crustaceans) that were captured at night. The balance of the prey were Copepods at 41%, fish eggs at 2.2% and larvae at 0.5%.

They are found in temperate and tropical seas and normally spend their life in mid ocean. Large numbers are often spotted by ships at sea.

Velella velella were originally allocated within the order Siphonophora. In this order each individual is actually a colony of separate organisms (polyps) that are connected by a canal system and that share nutrients. It now it is believed by some scientists that they are just a single large polyp. They have been relocated into the order Chondrophora also known as the Porpitidae.