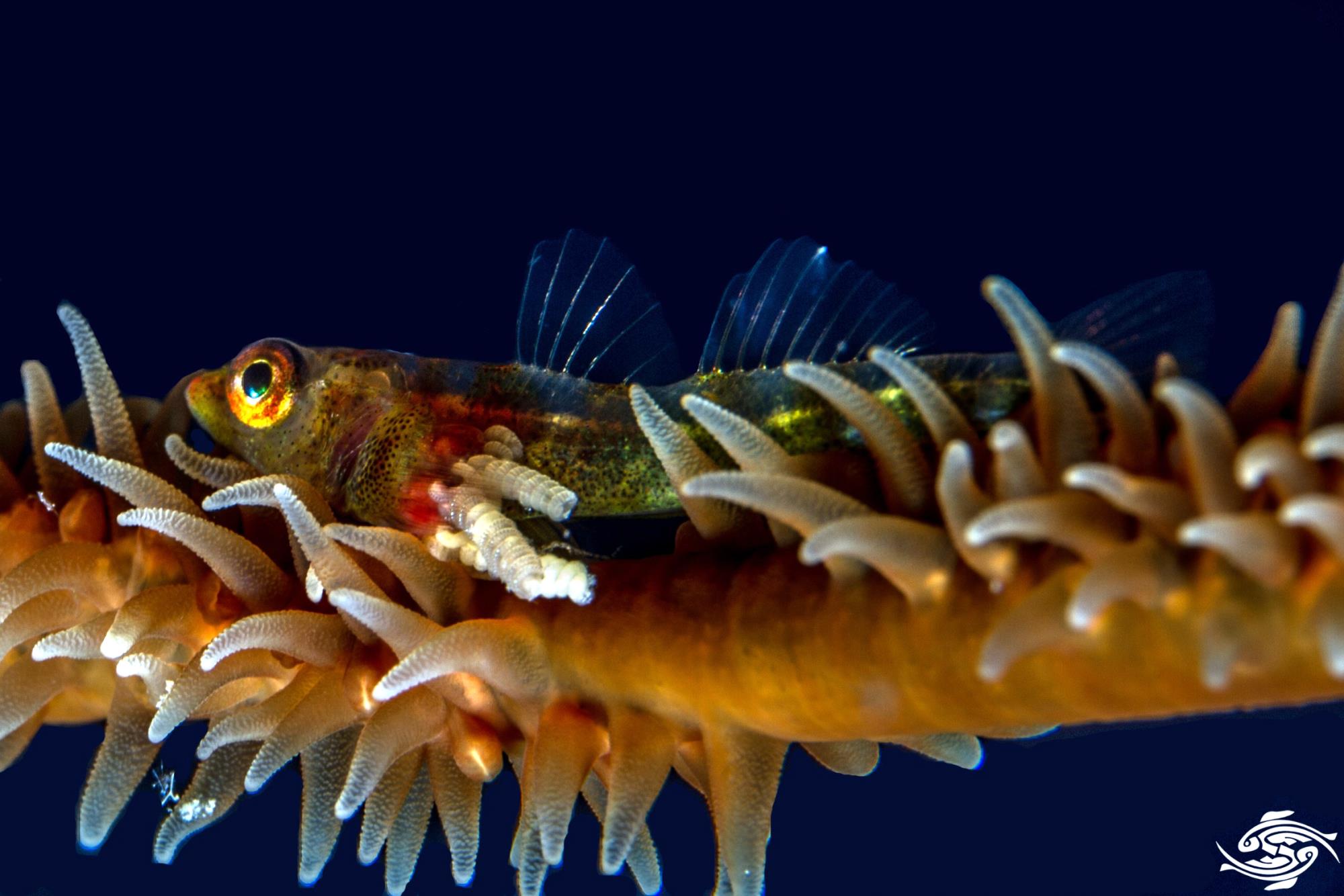 The Whip Coral Goby (Bryaninops yongei) is also known as the wire-coral goby. They have a very specialized habitat and are found only on the Whip Coral (Cirripathes anguina) and as a consequence have a number of adaptations to their habitat. 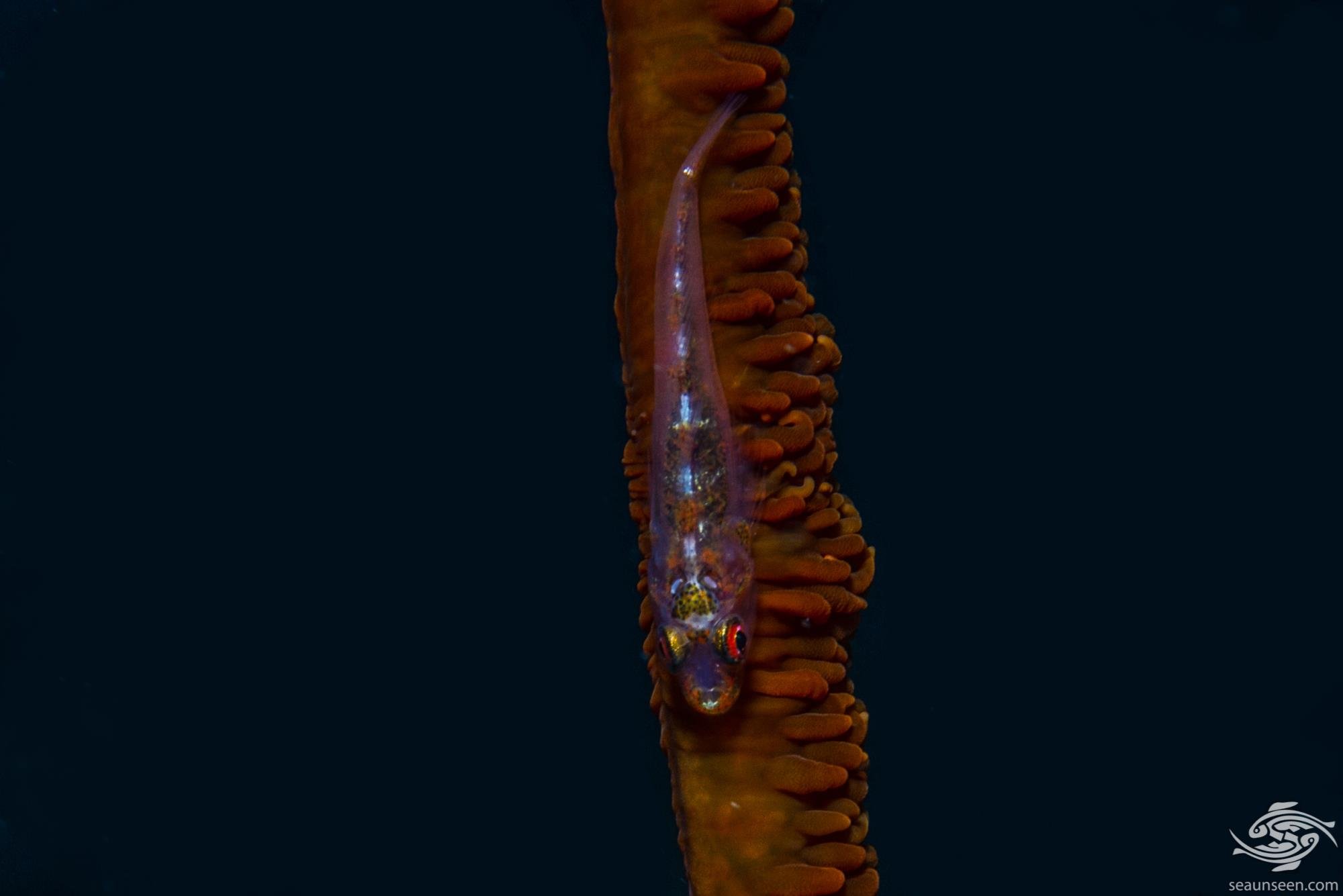 The Whip Coral Goby has a transparent body with a series of darker brown or reddish brown bars down the side. This allows the background colour to come through the fish enabling them to blend into the background and works as an effective camouflage. To enable them to attach themselves to the corals which are usually in high current areas,  their pelvic fins have evolved into sucker like appendages which give them a firm grip. 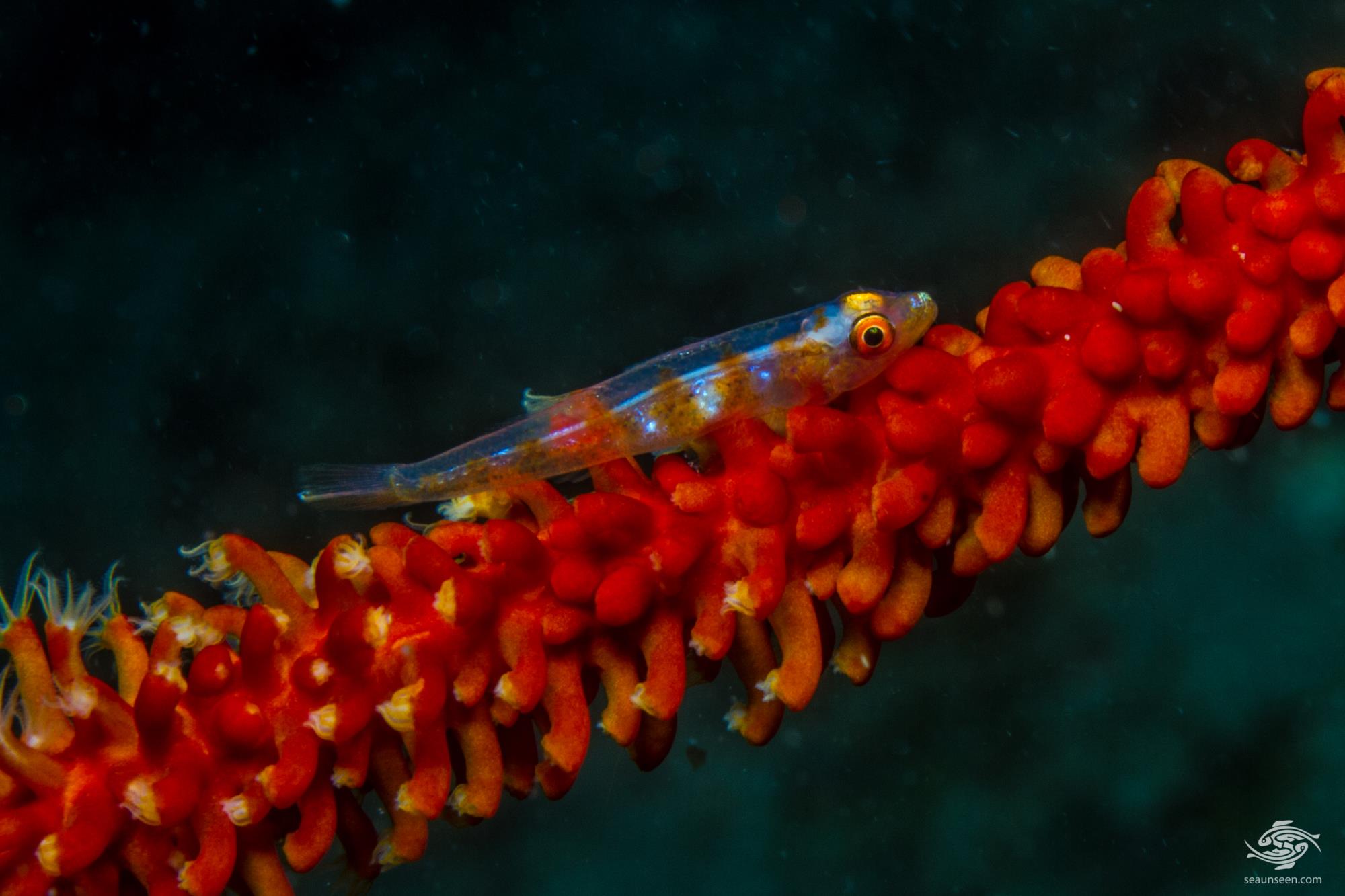 Further aiding in their camouflage are their gills which are set lower down towards the underside of the body making it more difficult for predators to spot the moving gills. Whip Coral Gobies have a proportionally elongated body and large eyes which allow them to spot passing planktonic matter. They grow up to 3.5 cm in length. 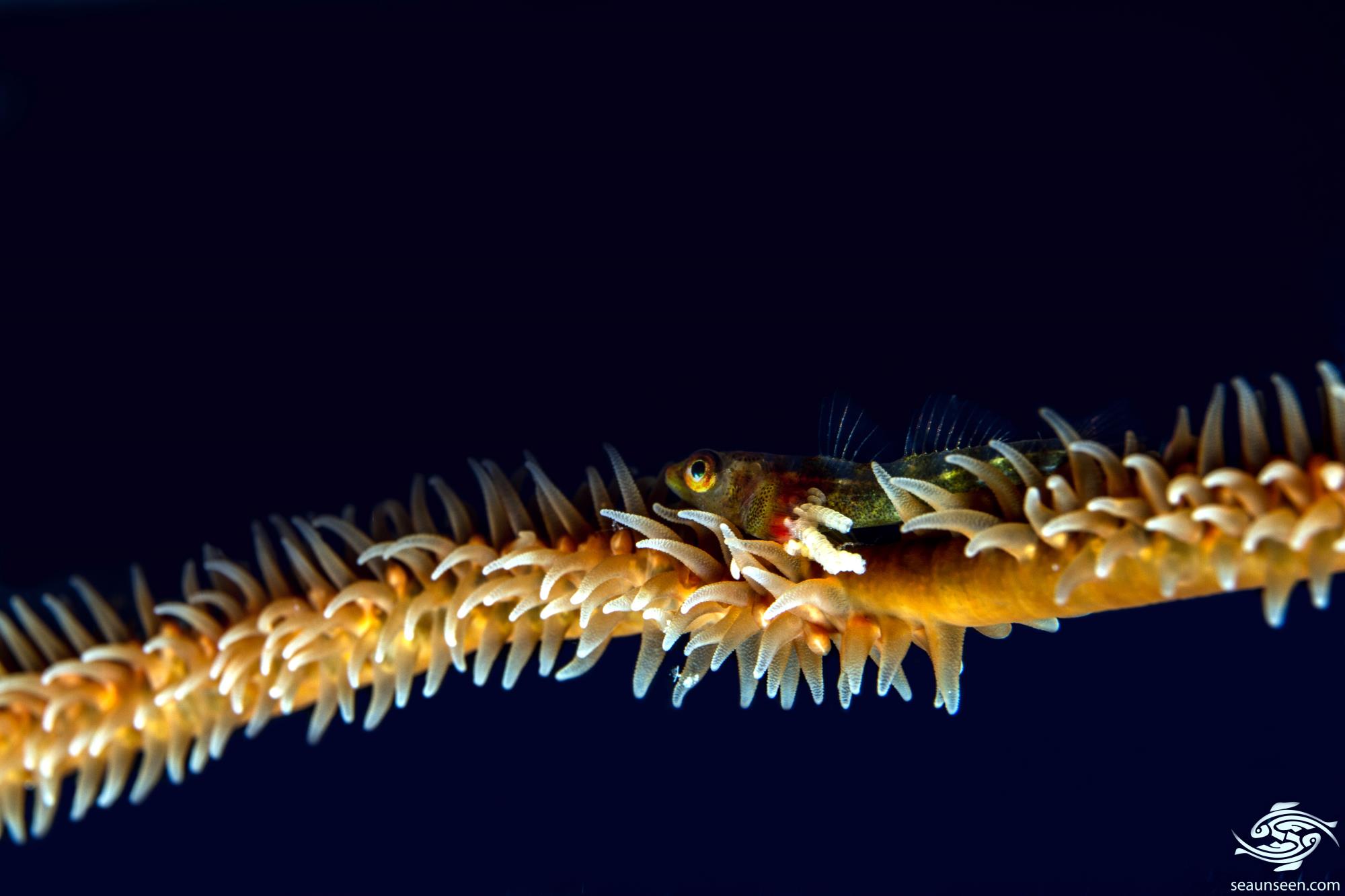 WHIP CORAL GOBY IN THE WILD

Because of its size the Whip Coral Goby is difficult to spot on the Whip Coral and they are remarkably alert to an approach by divers. Usually they skip to the opposite side of the whip coral in a short darting movement. This makes it difficult to approach them to photograph. We have had more success photographing and viewing them when there is little current and by doing a very slow approach towards them. Once they start moving on the whip coral the exercise seems to become pointless. The trick is to get close enough so that they think a movement may be dangerous and then one can photograph them. Be prepared for some frustration as they are remarkably zippy. Alternatively photographing or viewing them at night is easier.

On shorter corals one usually finds single juveniles and on the larger longer corals there is normally a pair. As one almost never sees more than two specimens on a coral there must be an element of territorialism in their behavior. Certainly we have never seen more than two adults on a coral and while one occasionally sees smaller juveniles on the bottom of a coral with the adults higher up in the more favorable feeding area this is not common. 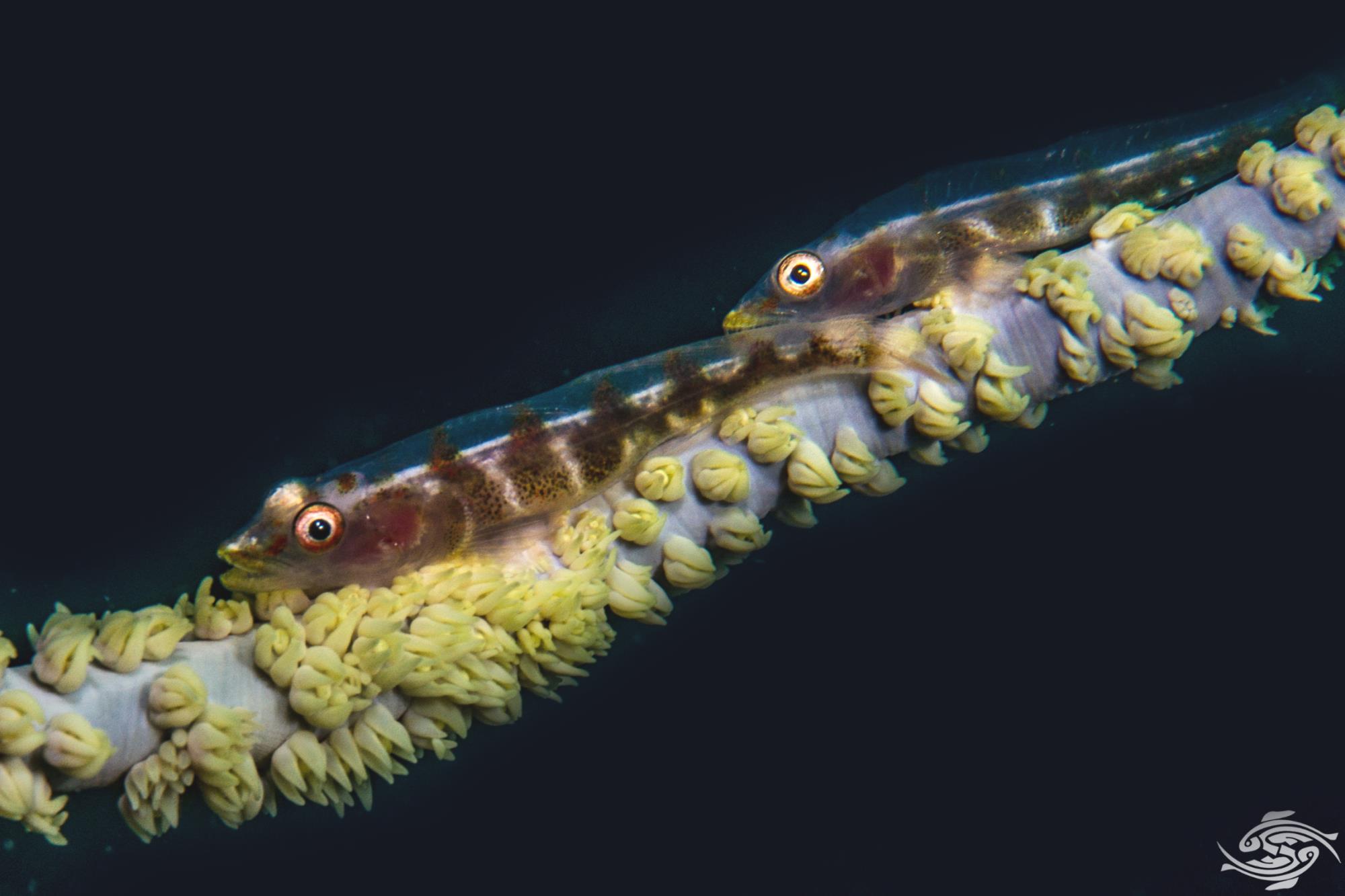 The Whip Coral Goby, is found across the Indo west Pacific area from East Africa to Southern Japan, south to the Great Barrier Reef.  Being confined to Whip Corals which typically grown in deeper waters with good current, they are not usually seen in the shallow waters. There are exceptions though and we  seen one Whip Coral on top of a wreck that hits the surface on a spring low tide. This is unusual however and Whip Corals are usually seen from 12 meters downwards off the Tanzanian coast. 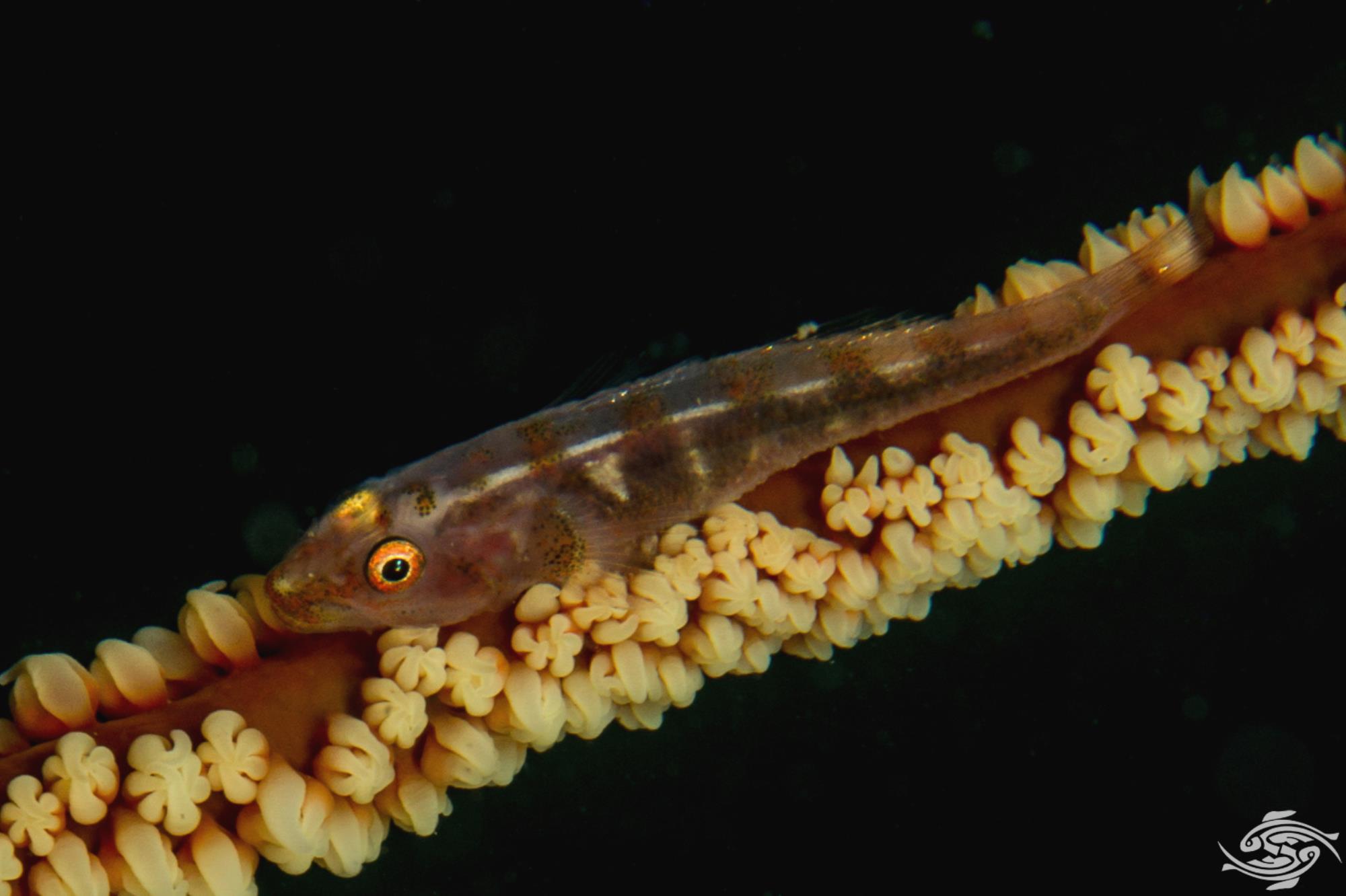 The Whip Coral Goby feed on planktonic matter passing by the Whip Corals. They are also known to eat mucus and polyps off of the corals. 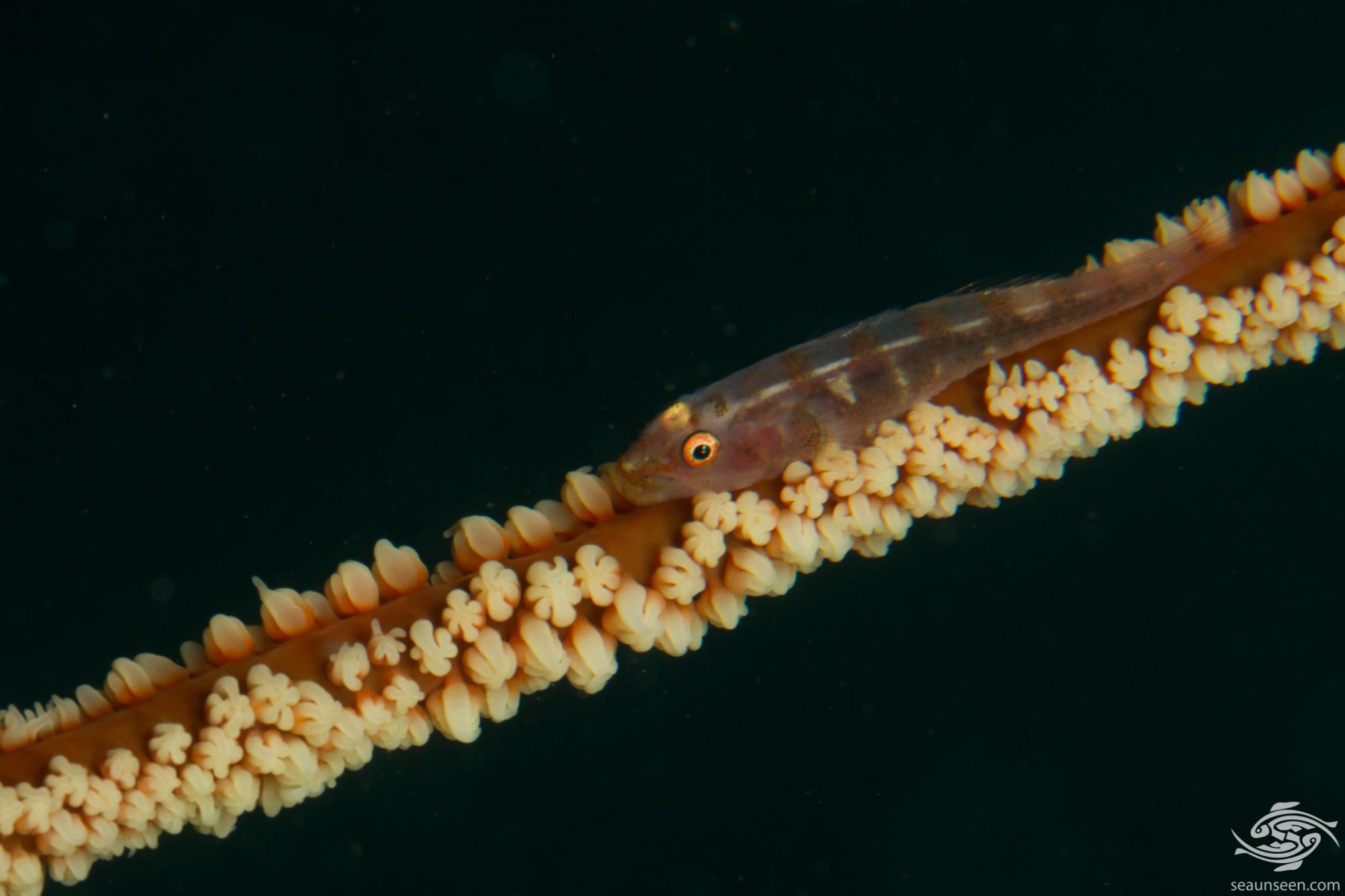 Research indicates that the Whip Coral Goby is able to change sex during its life. Both sexes seem to have both male and female organs which can be triggered to become dominant. These potential changes probably depend on social cues. In the research, pairs were always found together on a coral, indicating a monogamous relationship. The eggs are laid directly on the Whip Coral but little seems known of the following stage of their life cycle. 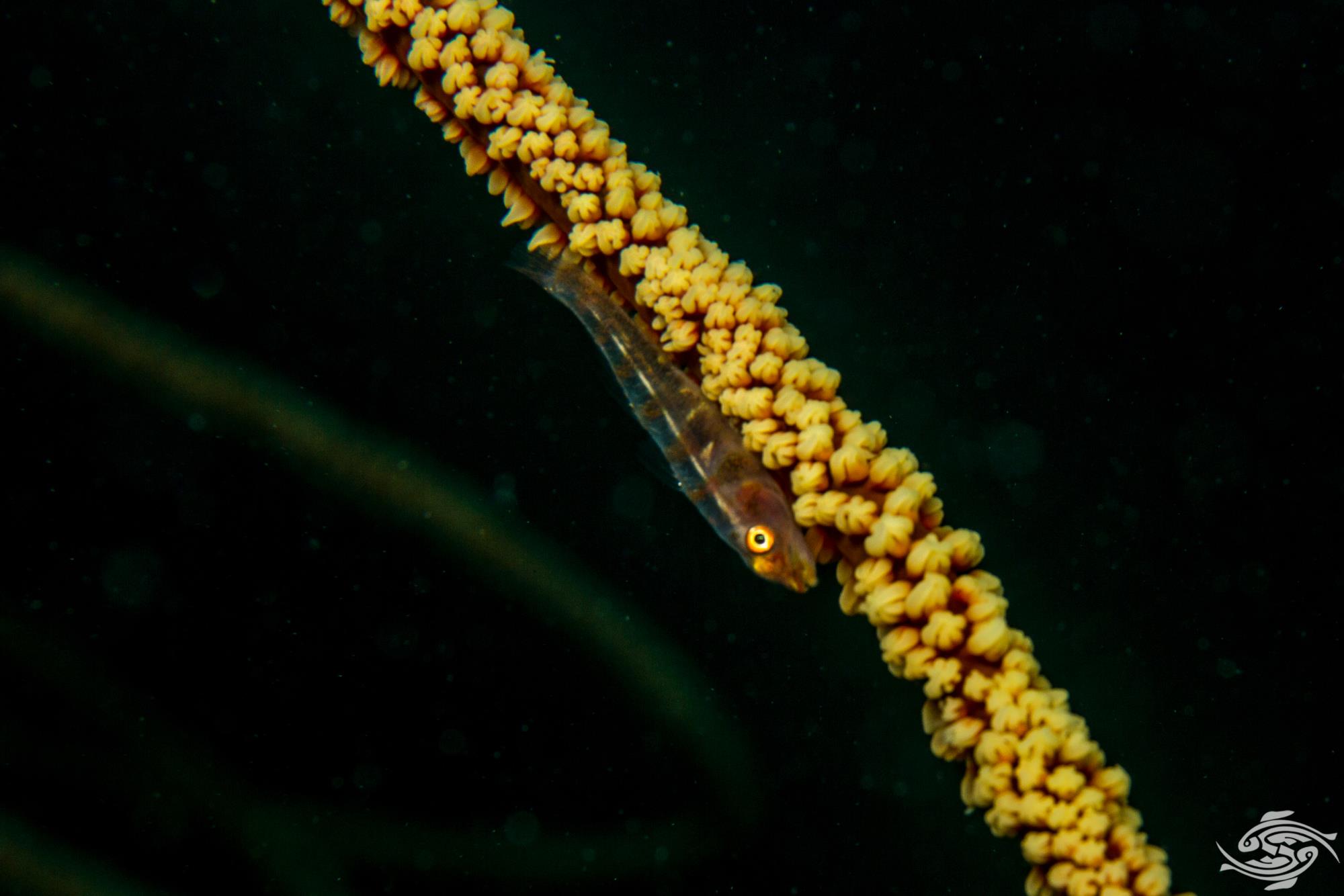 Whip Coral Goby are not commonly kept in aquariums. Because of their specialized habitat and the difficulty of keeping whip corals in an aquarium it is largely impractical. They may sometimes be seen in large public aquaria. 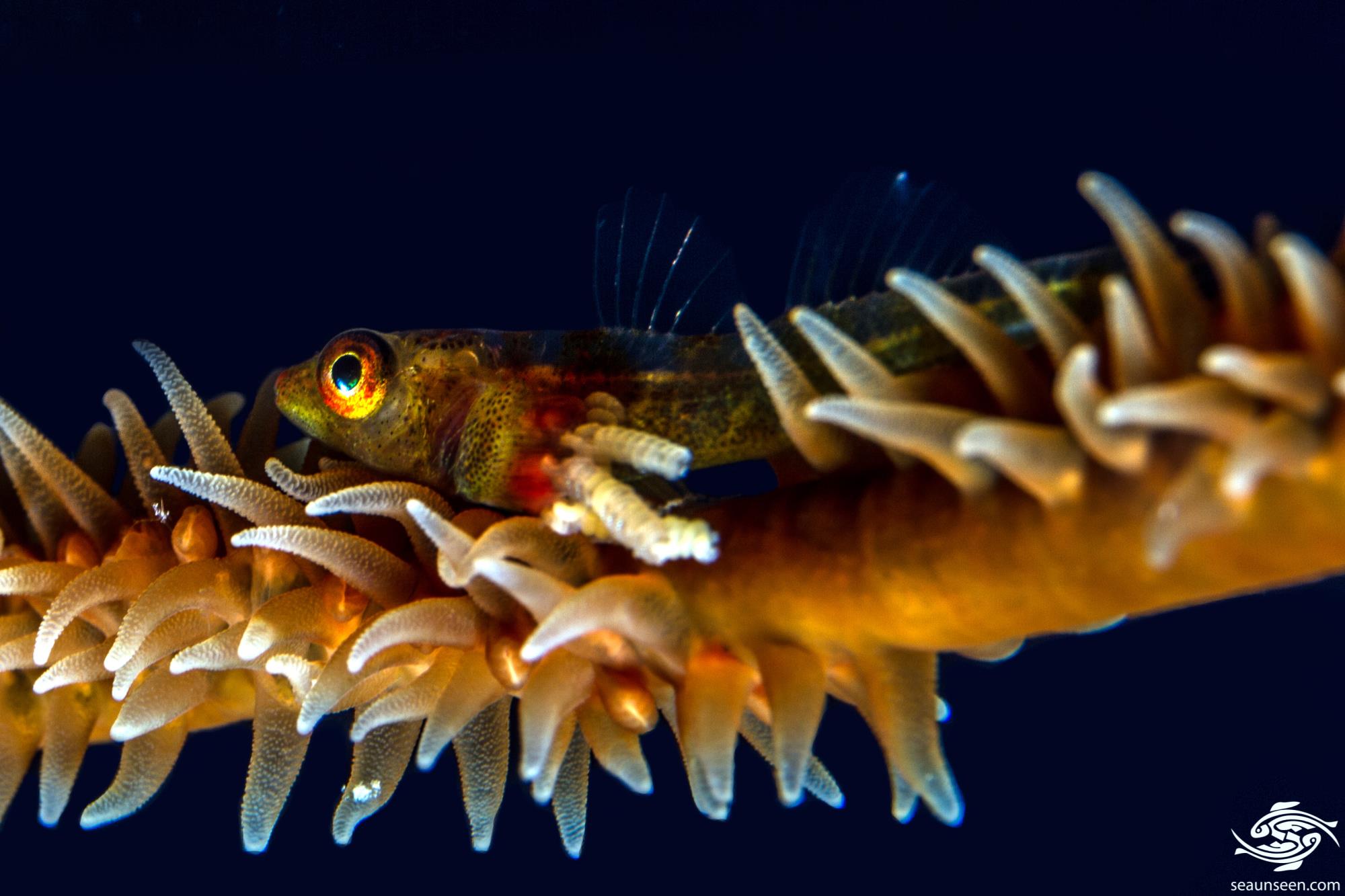