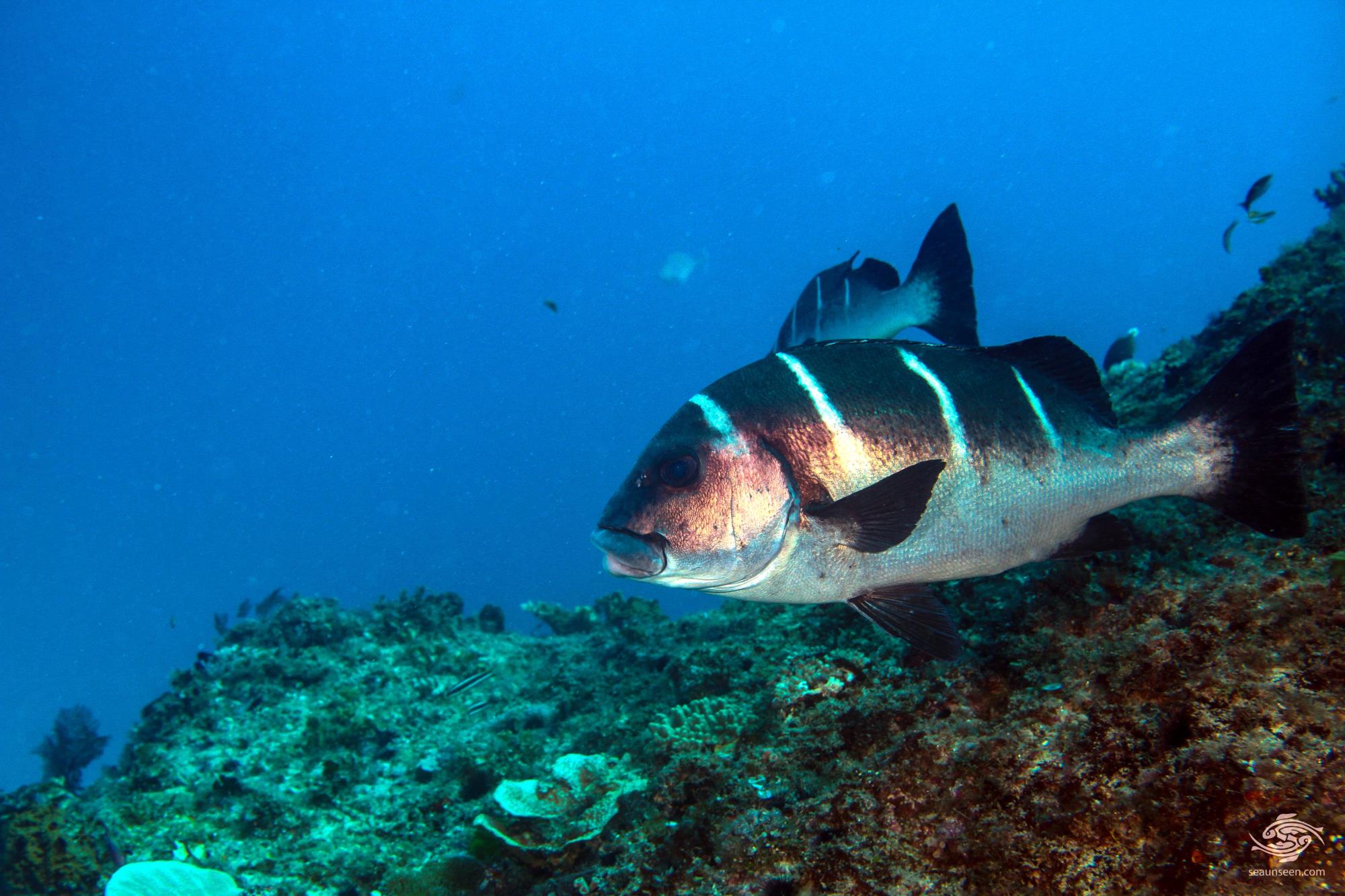 The white-barred sweetlips Plectorhinchus playfairi, also known as the white-barred rubberlip, is a species of grunt. Closely related to the snappers, grunts have smaller mouths and teeth and thicker fleshy lips hence the name sweetlip or rubberlip.

They may also grind their teeth together when caught, emitting a grunting sound, hence the name grunt. The white-barred sweetlips is a common fish on the east African coast and is one of the larger sweetlips. Due to overfishing in many areas there are becoming less common outside the Marine protected areas.

White-barred sweetlips have a dark black upper body and the lower part of the body is silver. They have four white vertical stripes on the body. The fins are all dark  black. As is to be expected from their name, they have large bulbous lips. They grow up to 90cm in length. The fishes in the images photographed in the Mafia Island Marine Park, are roughly this size. These days it is becoming rare to see specimens this size outside the protected areas. 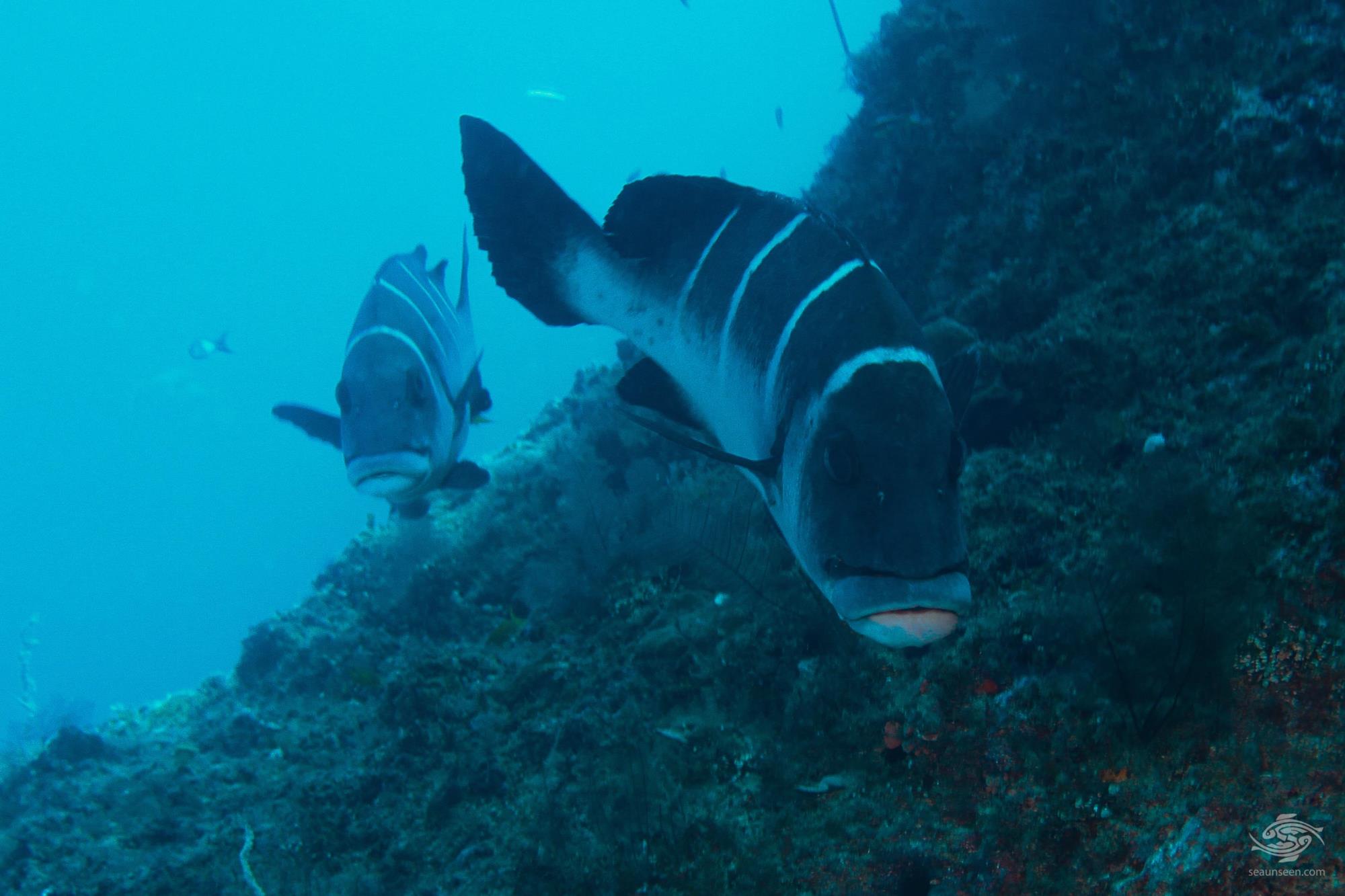 The adult white-barred sweetlips are very curious fish and will often swim right up to a diver to inspect him. This can be seen in the images in the post.

The white-barred sweetlips is found across the western Indian ocean from the Red Sea south to Port St Johns in South Africa.

The adults  are seen on the reef or along a drop off, usually solitary but sometimes in pairs as in the photographs. The juveniles are often found in grass beds in estuaries. 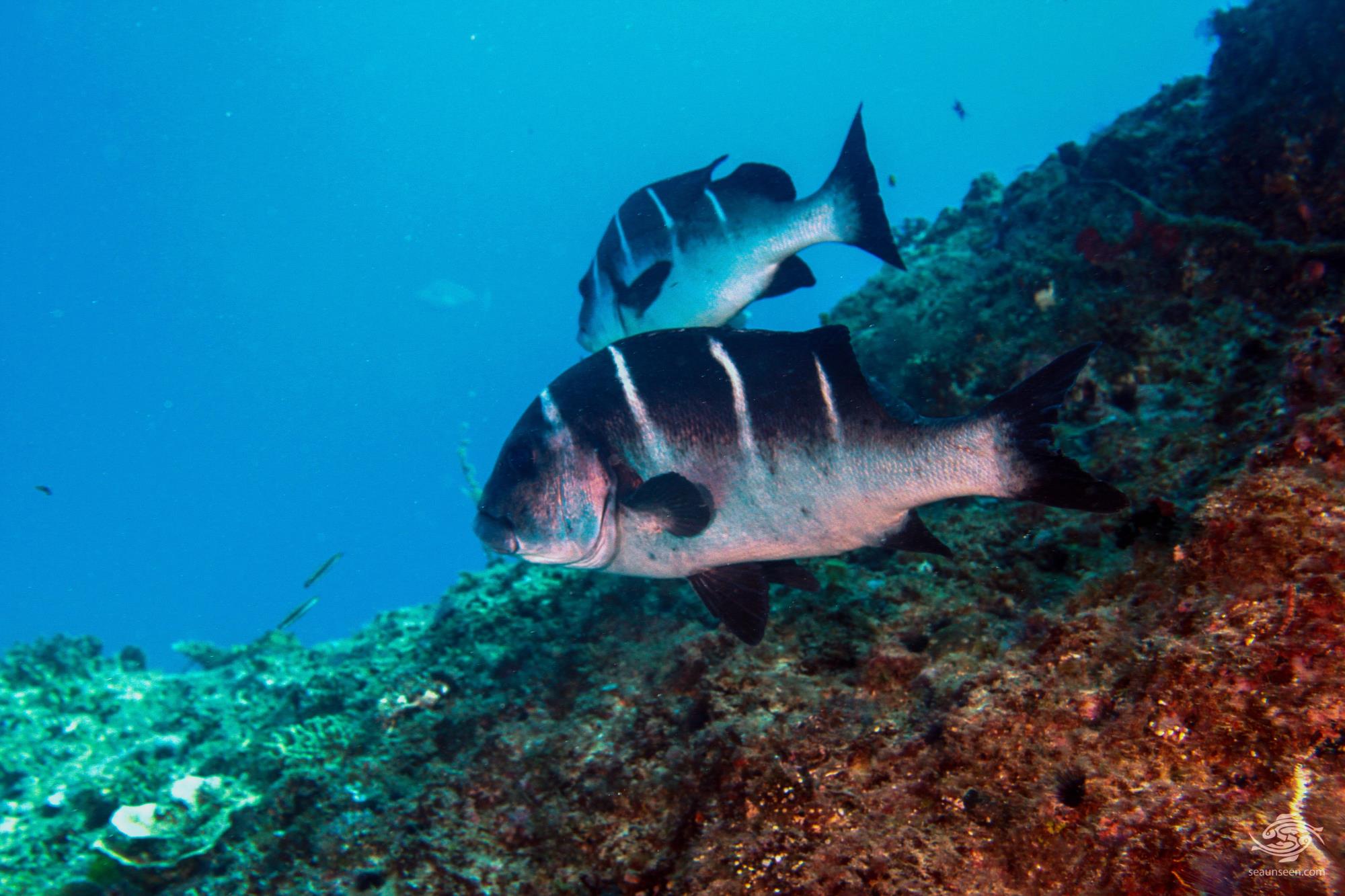 The white-barred sweetlips are nocturnal feeders , feeding mainly on sand living crustaceans and worms. Prawns are on their eating list and they are thought to blow these out the sand with jets of water.

Very little is known of their breeding habits. They are thought to mate above the reef with the eggs dropping into the water table and drifting down onto the reef. 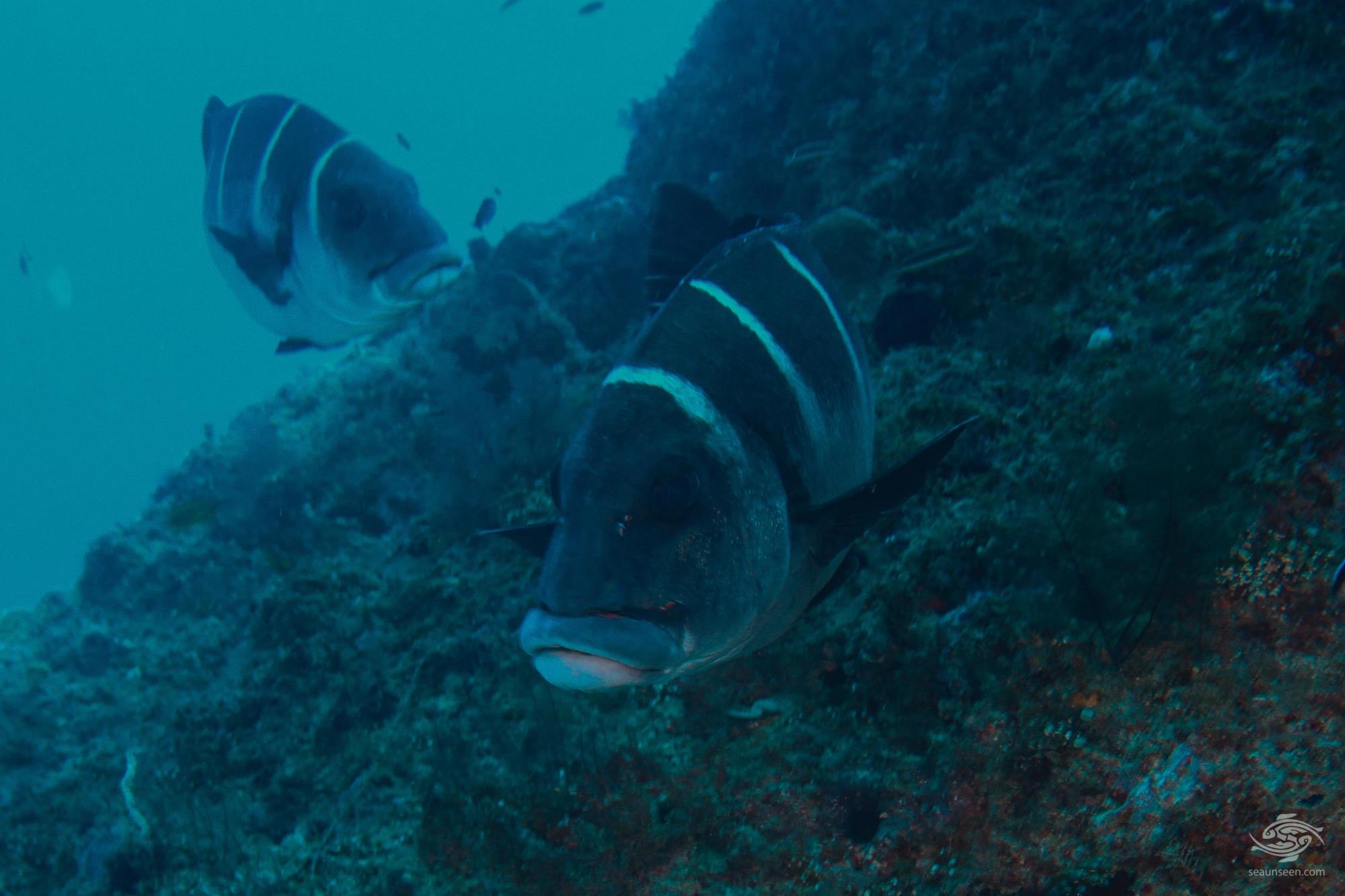 They white barred sweetlips is reputed to be  excellent to eat.

These fish grow quite large and are not generally kept in private aquariums. Some public aquariums  may keep them in their larger tanks. 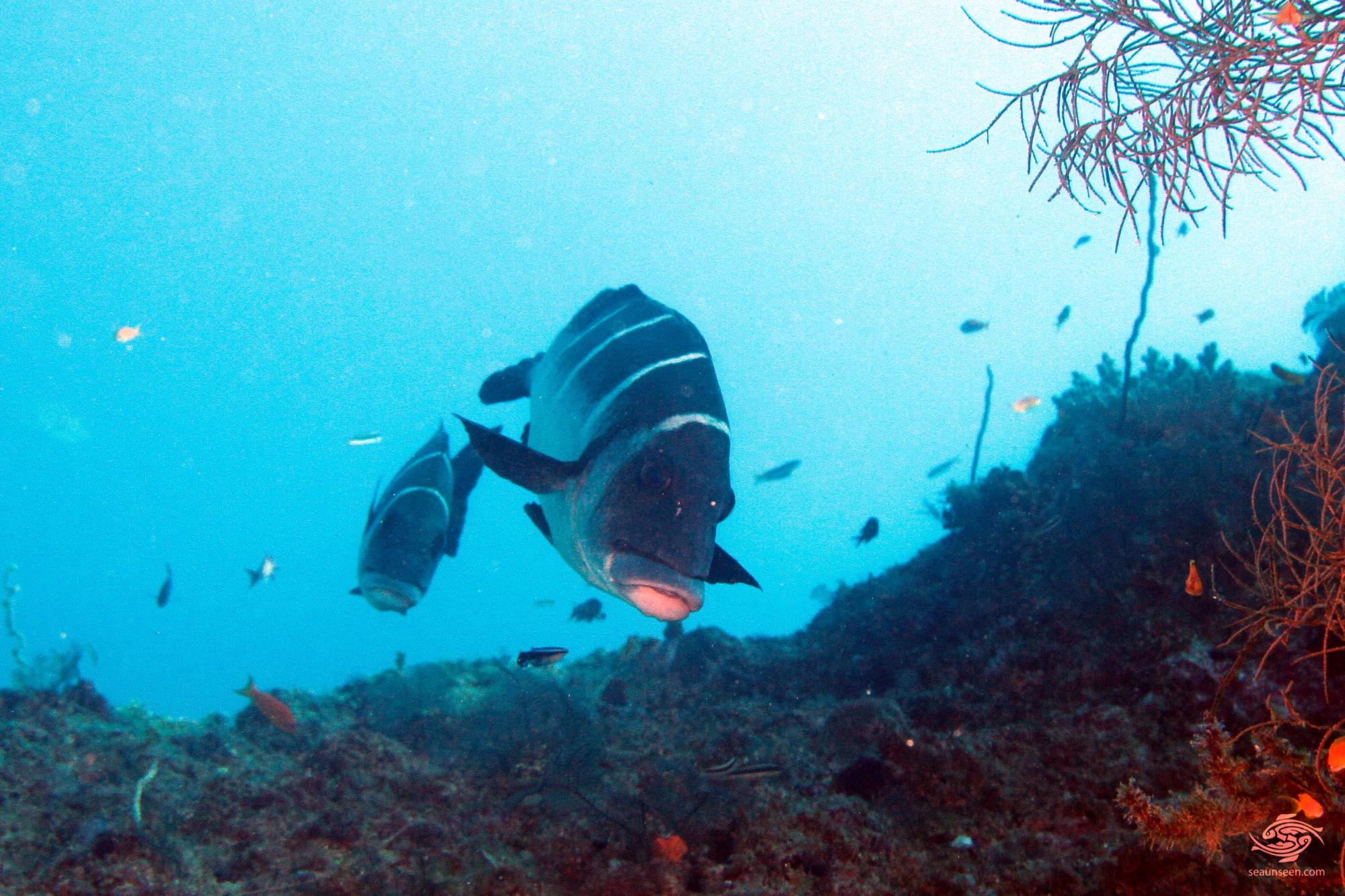