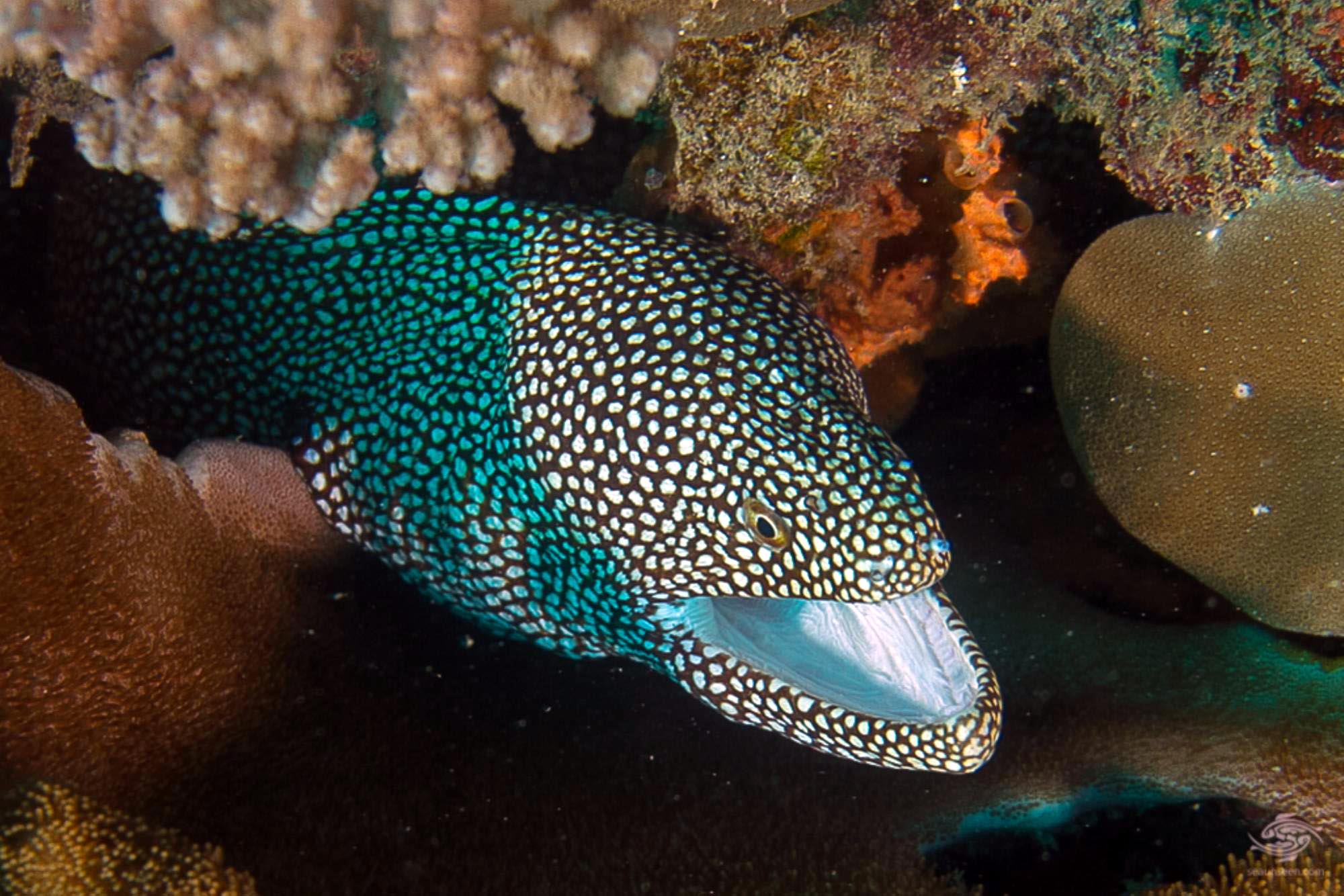 The white mouth moray eel is brown to yellow-brown with numerous white spots on the head and body. The inside of the mouth and the tip of the tail are white. There are enlarged canine teeth at the front of the upper jaw. The mouth is proportionately wide with teeth designed for tearing flesh rather than grinding or holding in place.
They do not have pectoral or pelvic fins and the dorsal fin runs the length of the body. Morays secrete mucus over their scaleless skin, which in some species contains toxins. They have a thick skin and a large number of cells that secrete mucus. The white-mouth moray eels grow up to a meter in length.The enlarged head can clearly be seen in the image below. 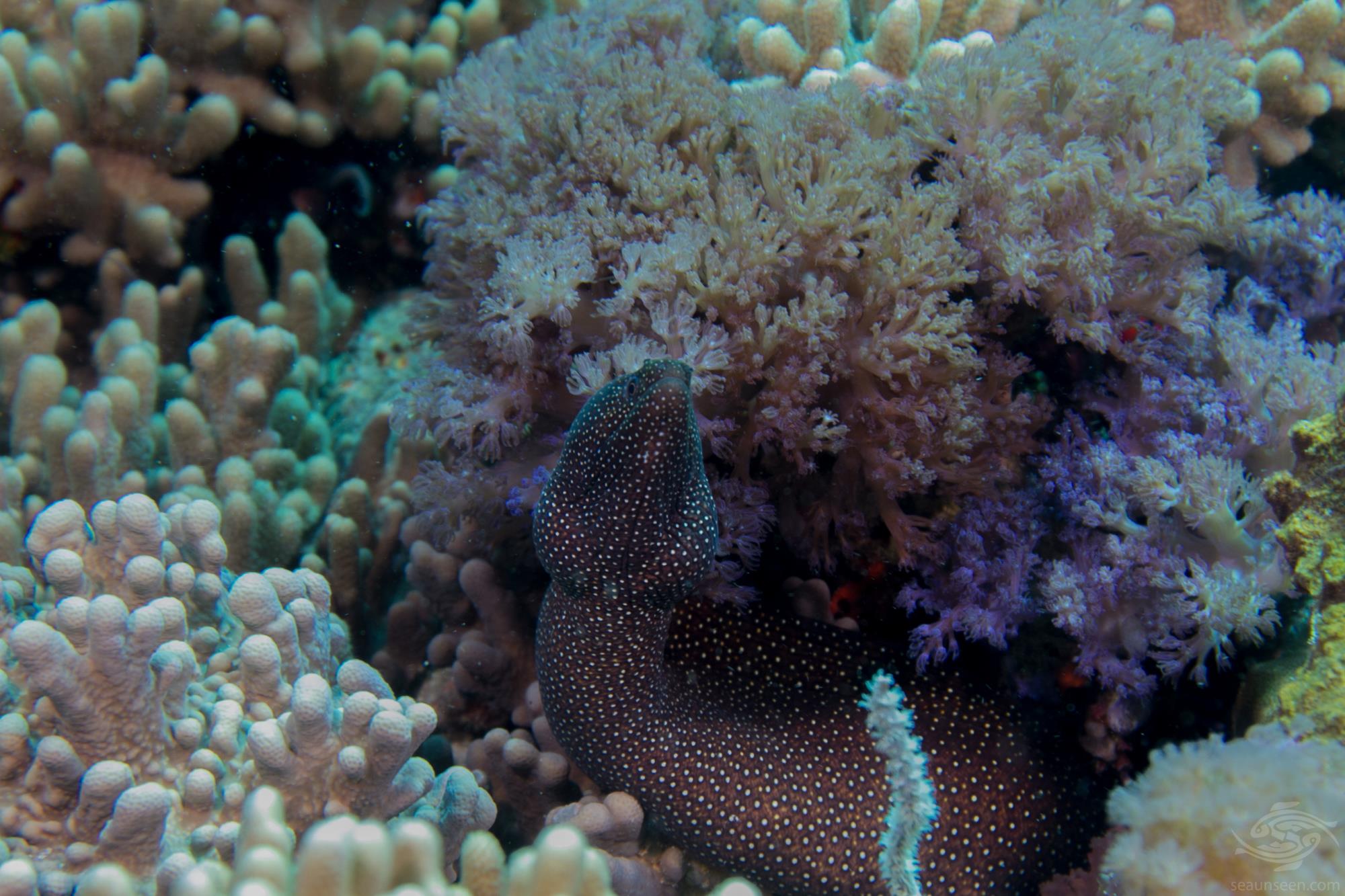 On the roof of the mouth white-mouth moray eels have additional rows of teeth, which are larger than those around the rim of the jaw. The number of teeth seem to vary from eel to eel but the younger ones have up to three extra rows of teeth. This can clearly be seen  in the image below and as one can see gives them a pretty fearsome bite. 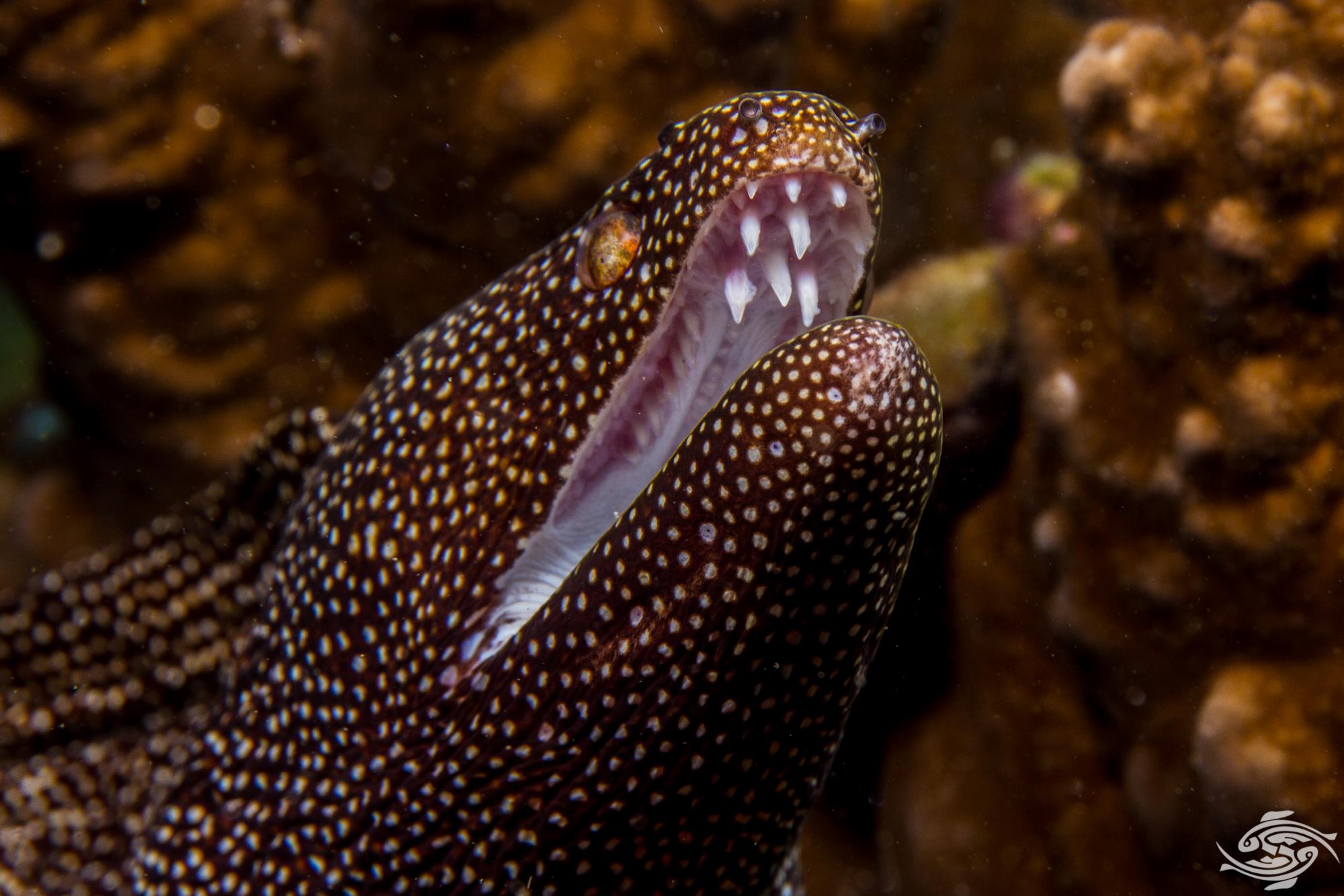 Some researchers speculate that moray eels contain toxins in their mouths and are poisonous.From many years of catching crayfish on the Kwa Zulu Natal coast I have never had a bite go sceptic. After every bite I have soaked the bite area in hot water as hot as I can take it. Much of the bite damage occurs when one pulls ones hand back after being bitten. Many experts say that one should not pull back, however they should go try it themselves. The bite is usually sudden and unexpected and it is natural to pull away from it.  I have personally seen one diver who lost the use of his thumb from a giant moray bite but that is unusual.

Morays secrete mucus over their scaleless skin, which in some species contains toxins. They have a thick skin and a large number of cells that secrete  mucus epidermis. Moray eels have proportionately small  circular gills, located on posterior of the mouth and the moray is constantly opening and closing its mouth to facilitate sufficient water flow over its gills. In general the opening and closing of the mouth is not threatening behavior but one should not approach too closely. They will bite if threatened. 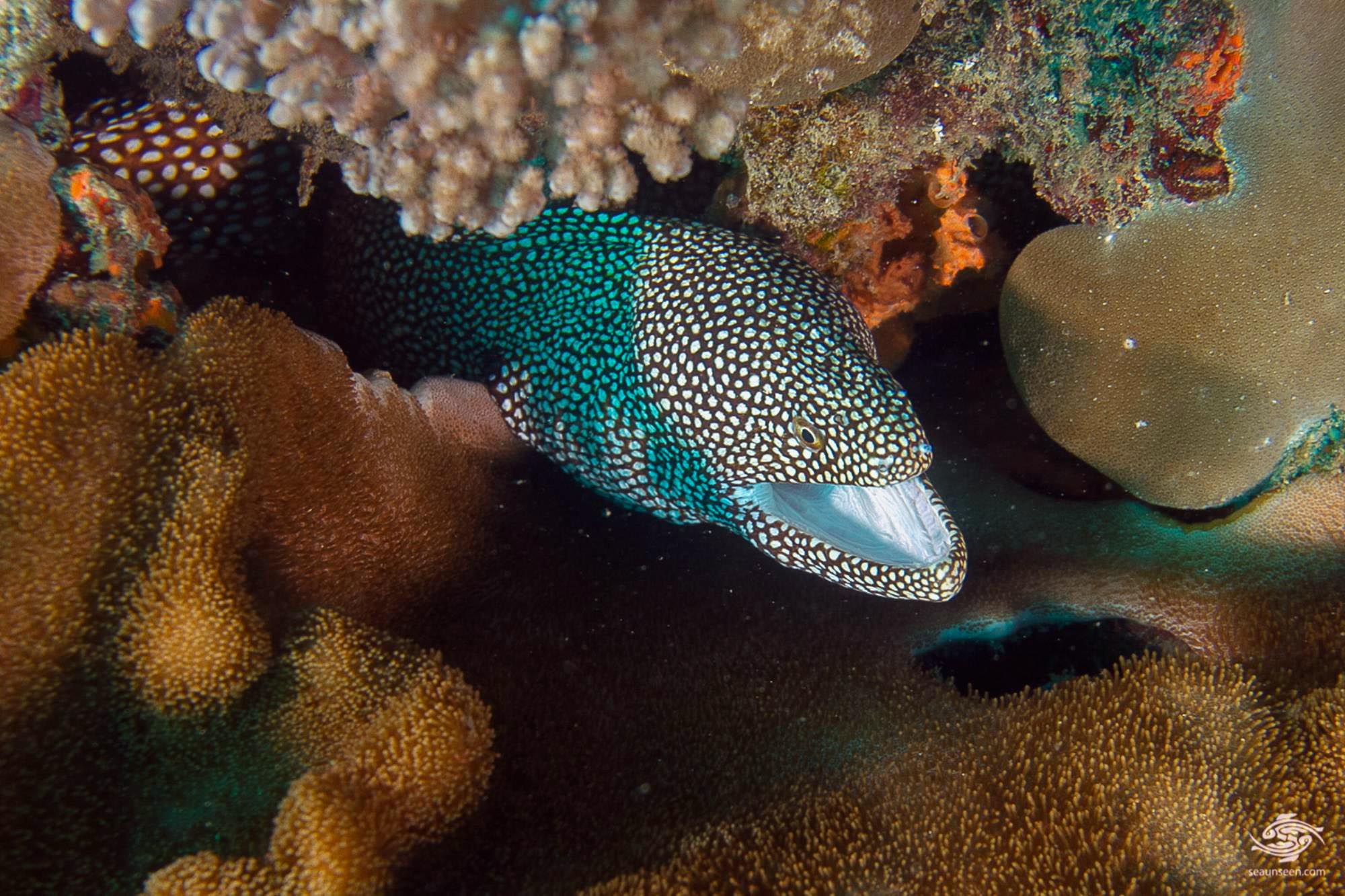 The white mouth moray eel are generally seen protruding from a hole or small cave and are seldom if ever seen in the open. They are not aggressive but should be treated with caution because of their sharp teeth. 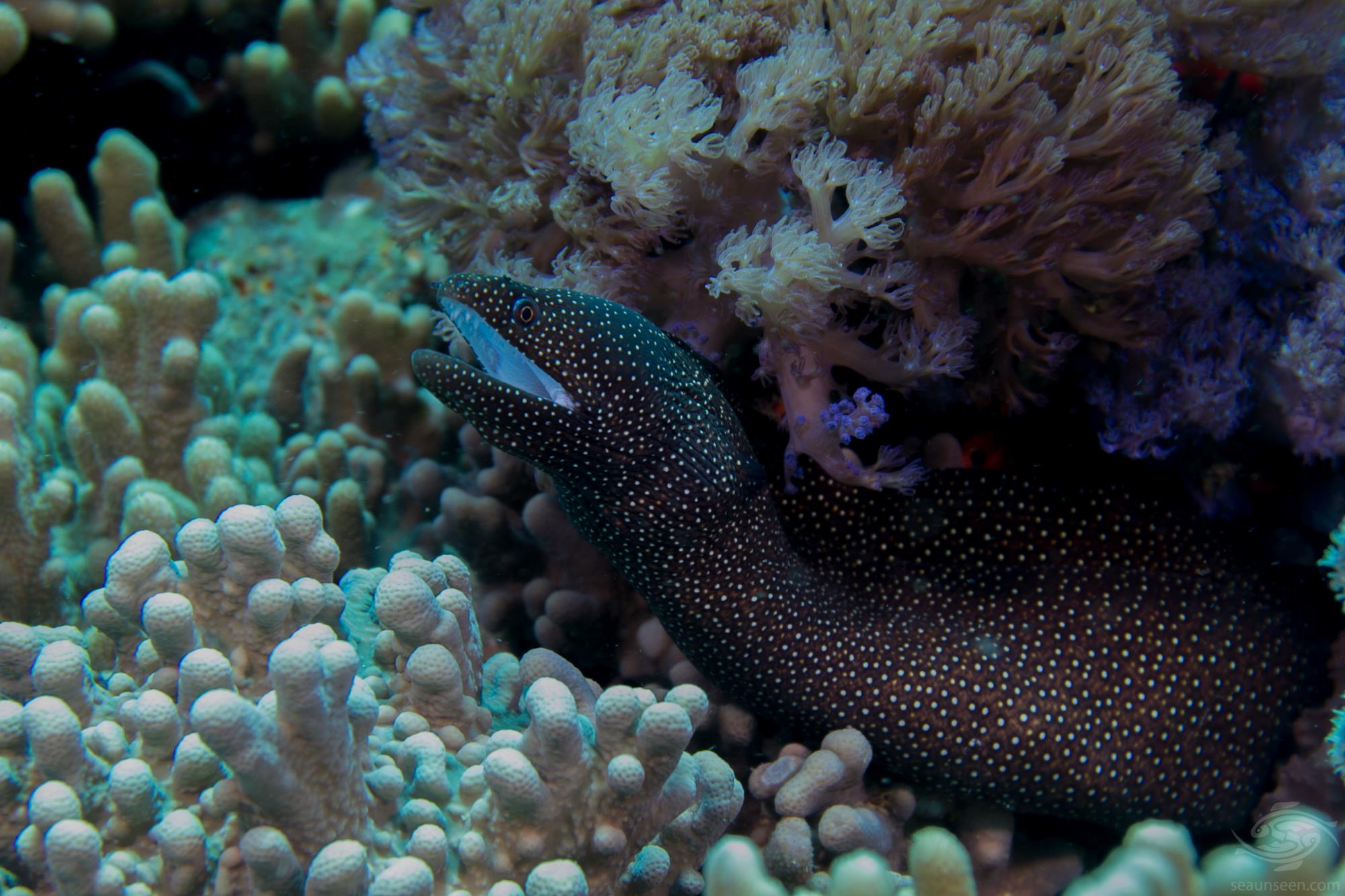 The white mouth moray eel is found across the Indian ocean and in the west Pacific.

The whitemouth moray eel is carnivorous, and does most of its hunting at night. They feed mainly on small fish and crustaceans but the fact that they are on occasion caught by fishermen using bait indicates that they will scavenge as well.

white mouth moray eel has a second set of toothed jaws in their throat called pharyngeal jaws. When feeding, morays latch onto the prey with their outer jaws. They then push their pharyngeal jaws, which are set back in the pharynx, forward into the mouth. These jaws then grasp the prey and pull it back into the stomach. Moray eels are the only fish that use pharyngeal jaws to capture prey. Their main hunting tool is their excellent sense of smell which makes up for their poor eyesight. This means that weakened or dead creatures are the moray eel’s favored food. 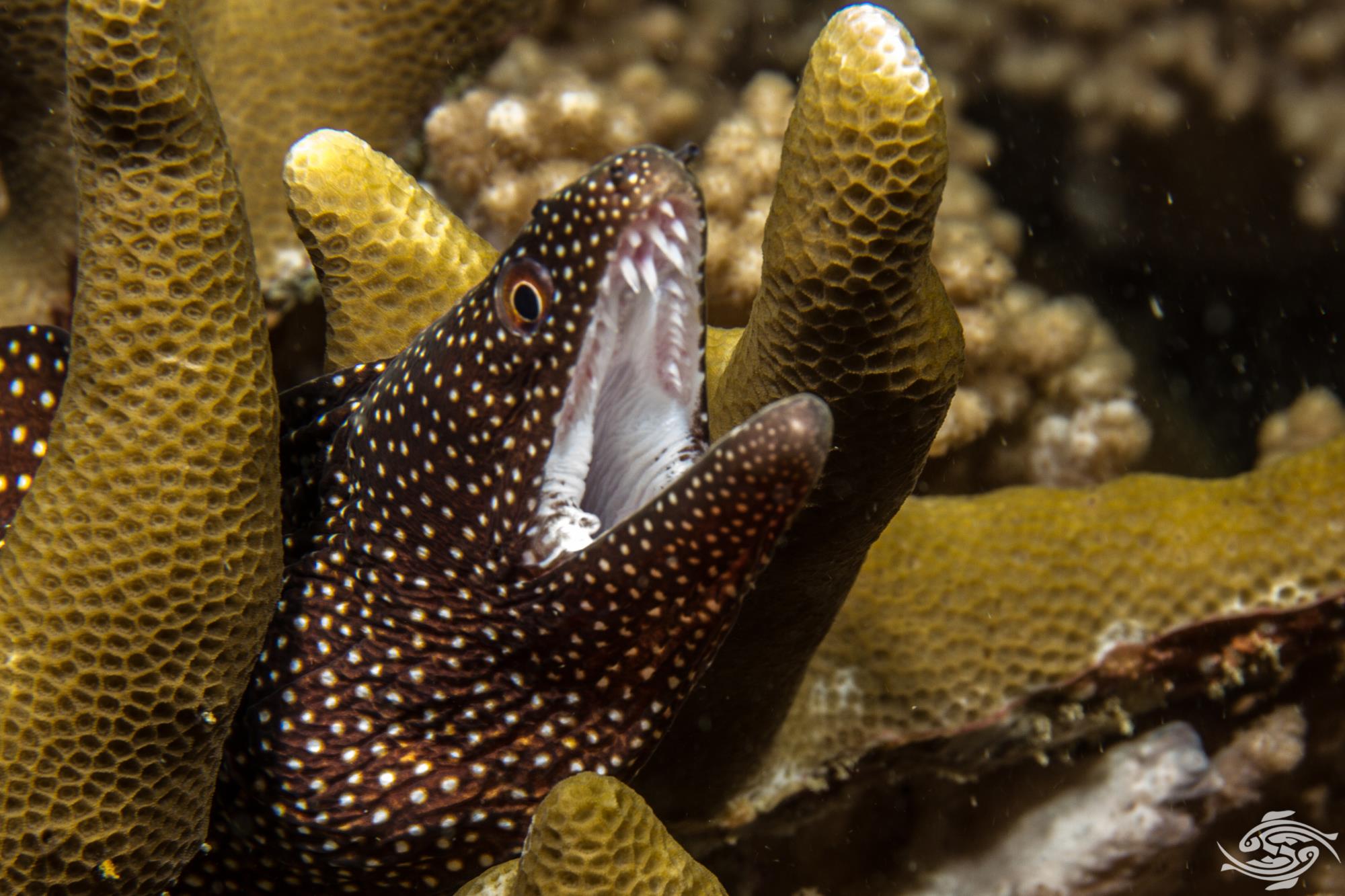 Because of their attractive looks they are kept in aquariums.  Due to their size of up to one meter in length they should only be kept in a very large aquarium. They are easy to feed and are hardy. They cannot be kept in a reef tank as they will eat crustaceans and fish and are likely to push rocks over that are not well anchored. .