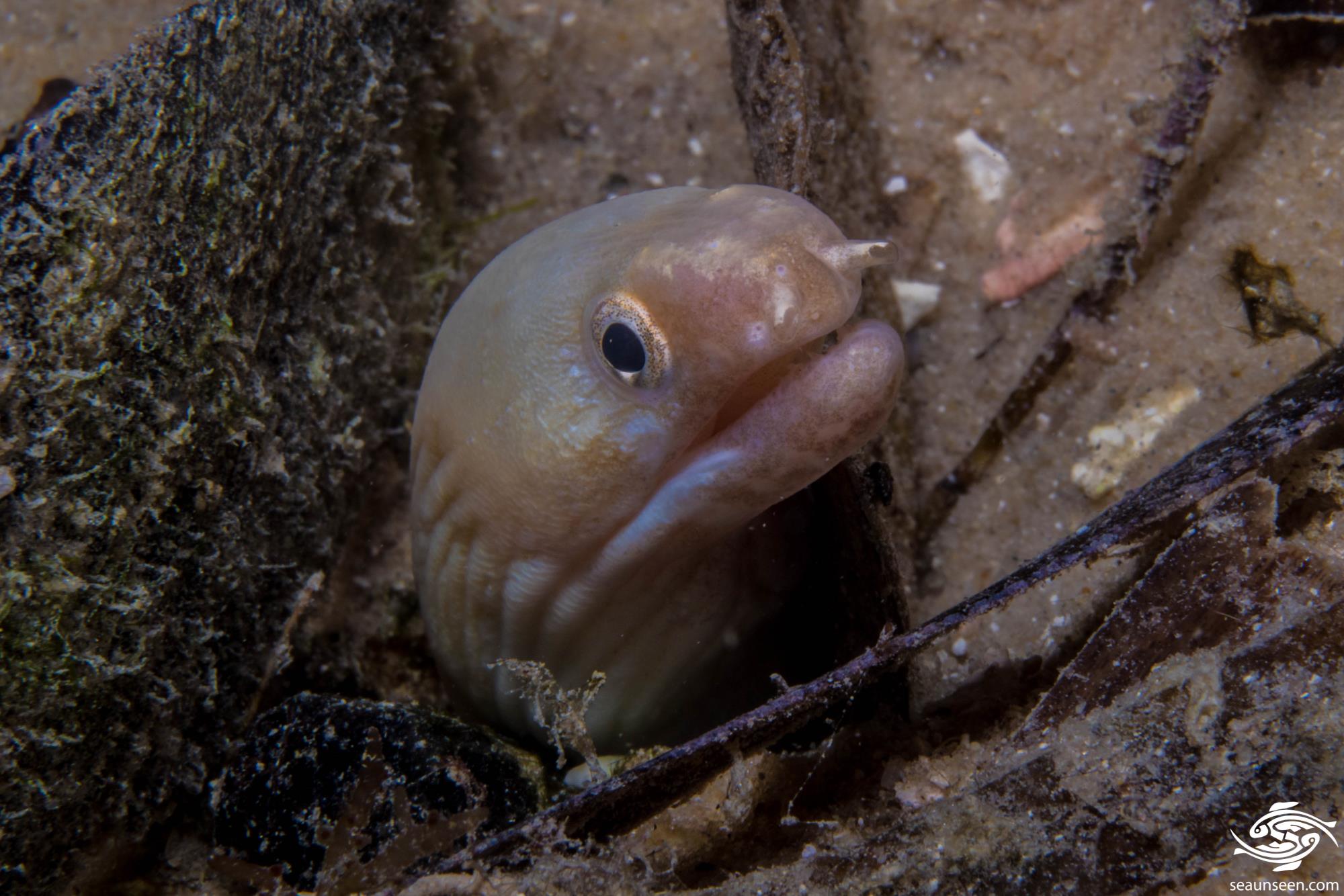 The Whitemargin moray eel (Gymnothorax phasmatodes) is also known as the Ghost Moray Eel, they are similar in looks to G. albimarginatus which is found further east in the West Indo-Pacific area. They are not common in Tanzanian waters and one occasionally sees them out at night hunting for prey usually on the sand near shallow reefs . They were described by JLB Smith in 1962 with the holotype being from Inhaca in Mozambique. 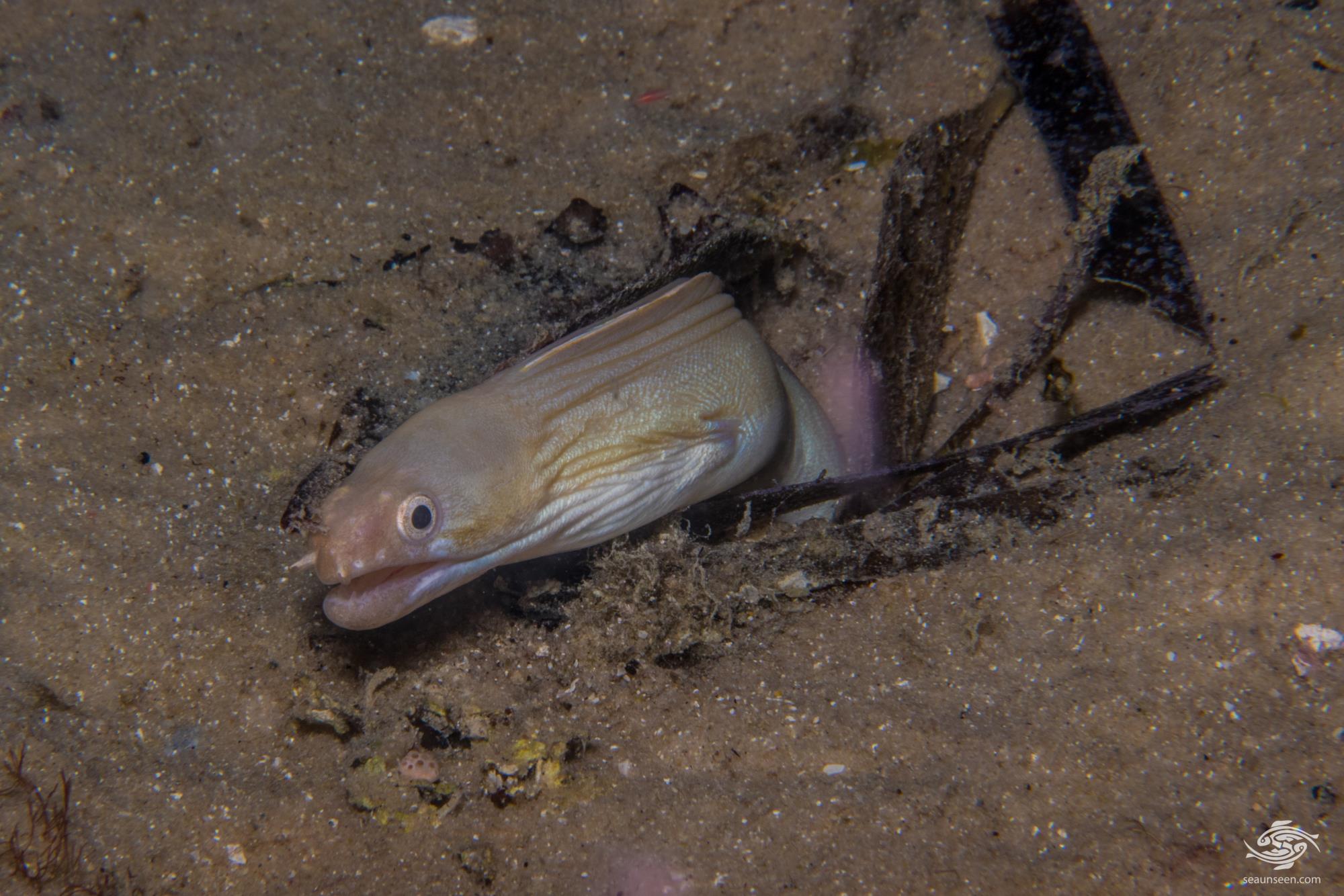 The Whitemargin moray eel is one of the smaller species, growing up to 105 cm in length. The facial area is a pink color and the body is white along the bottom and a pinky brown along the upper section with a distinctive white line along the top of the dorsal fin. The mouth has short serrated teeth which might be more suited to sawing than biting. They do not have pectoral or pelvic fins and the dorsal fin runs the length of the body. 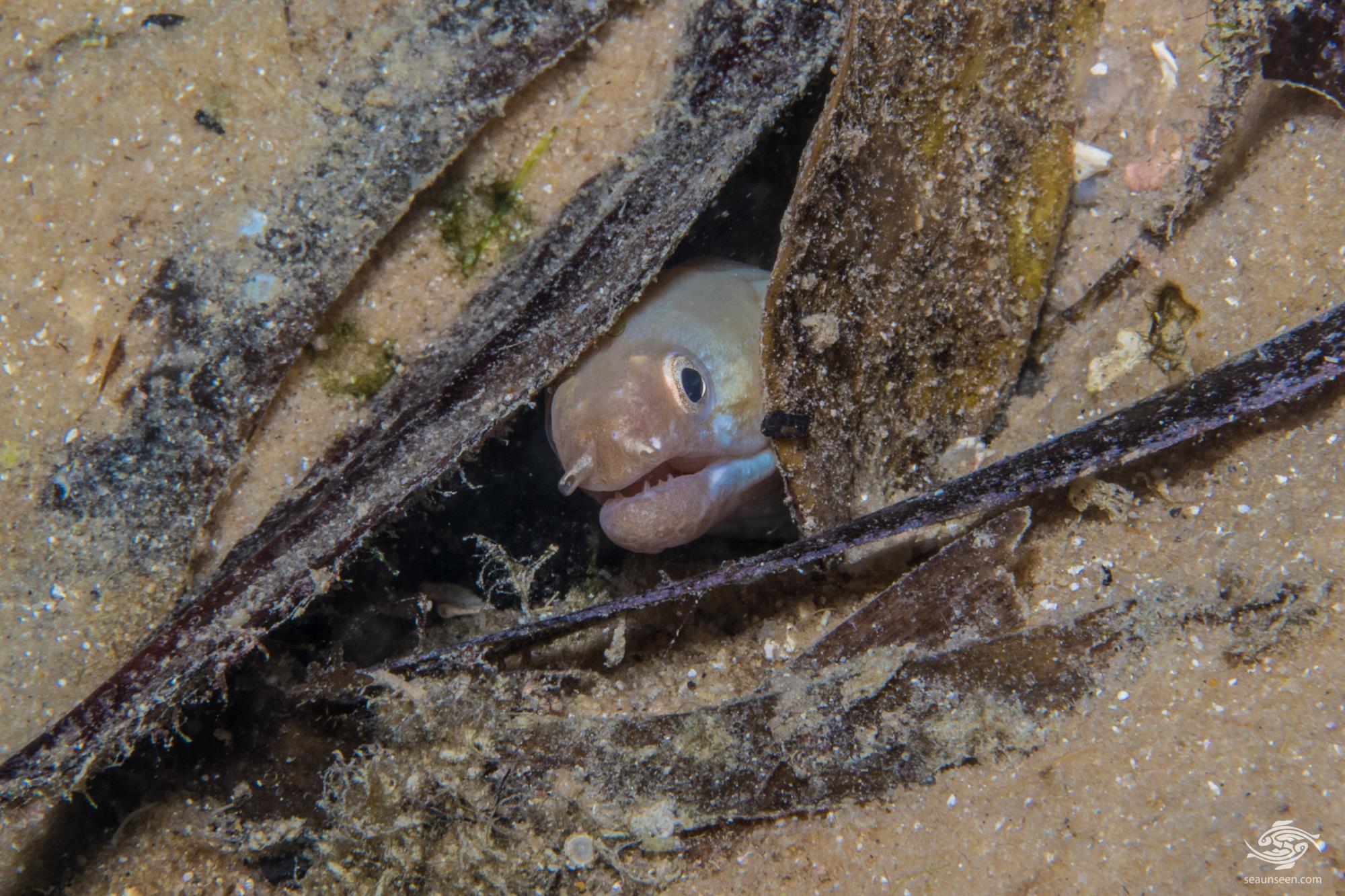 WHITEMARGIN MORAY EEL IN THE WILD

Whitemargin moray eel are nocturnal feeders and spend the days hiding in crevices in the rocks or as can be seen in the images in the sand . One seldom if ever sees them out during the day.  At night they are sometimes seen out in the open hunting, but once one puts lights on them they retreat into a crevice. 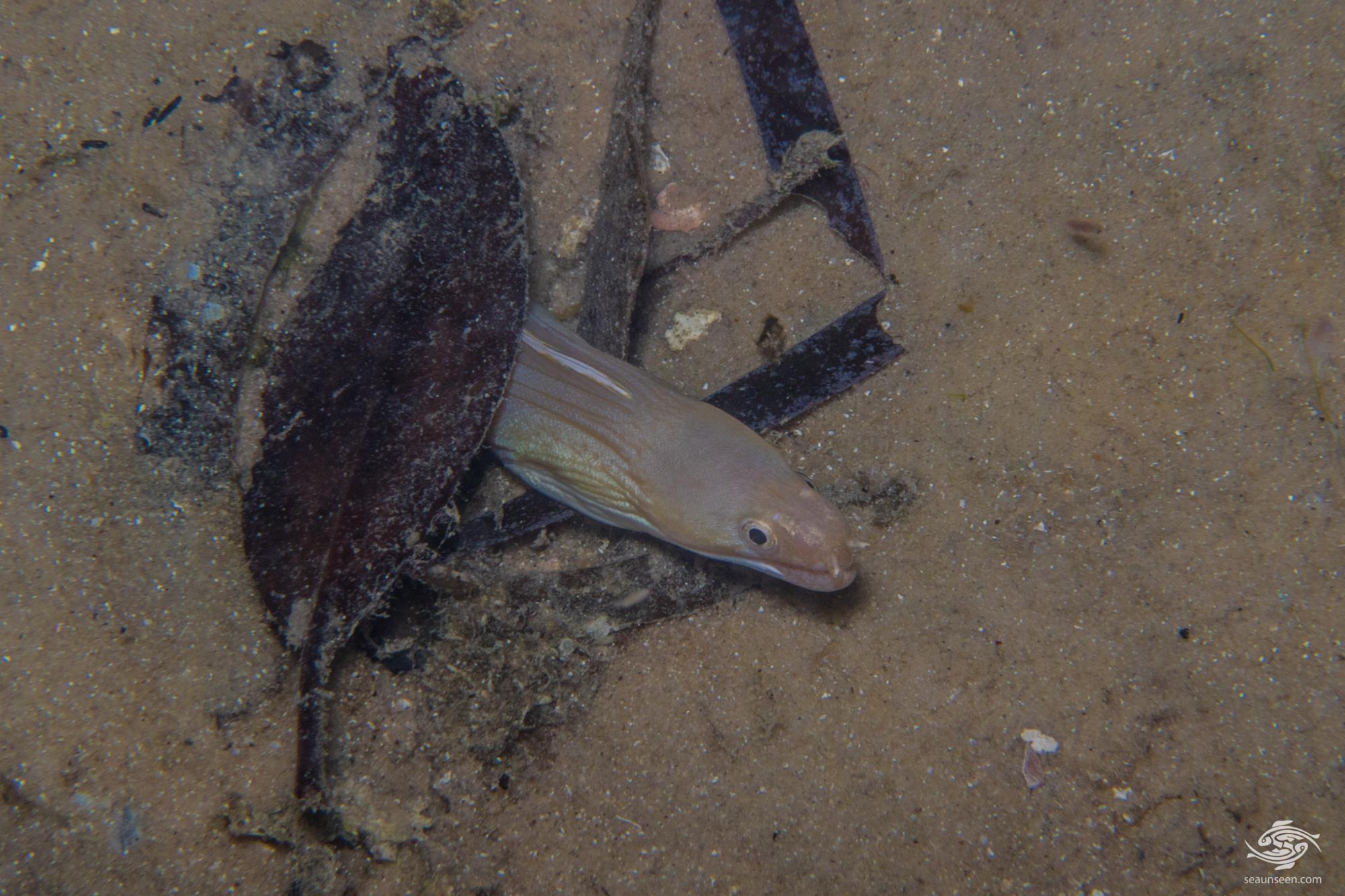 Some researchers speculate that moray eels contain toxins in their mouths and are poisonous. This species is described as being poisonous. There appears to be no literature per se that documents this or describes the type of toxin.  It seems that the  Whitemargin Moray Eel may contain toxins in its mouth and that with its small saw type teeth could theoretically deliver toxins into ones blood stream. There is a good article here on toxins in moray eels.

I have never been bitten by this particular species of eel , but I have been bitten by many other species while catching lobsters on the Kwa-Zulu Natal coast. This is probably not a hobby for most people and carries some risk. One wears gloves but they invariably bite through them. I have never had any indication of a toxin and after every bite I have soaked the bite area in hot water as hot as I could take it on my return home after diving. This sometimes several hours after being bitten.  Never had inflammation or any indication of a problem apart from the pain of the bite.  Neither have I had excessive bleeding.  The worst bite I have had was from a large giant moray  which bit my whole hand with one tooth going right through my finger. Morays also secrete mucus over their scaleless skin, which in some species contains toxins. They have a thick skin and a large number of cells that secrete mucus. 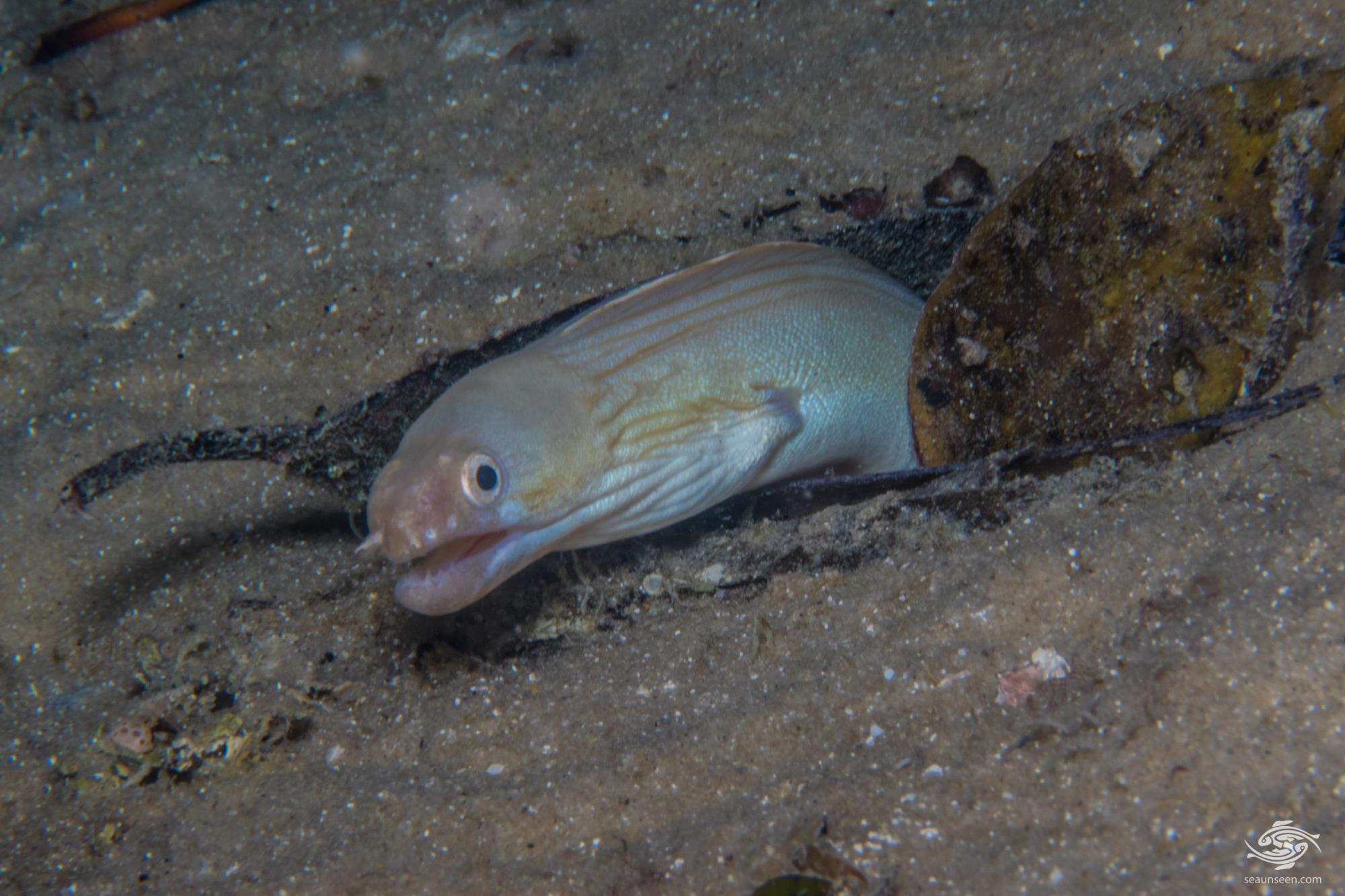 The Whitemargin moray eel is widespread across the Indo-Pacific area, being found from the East Coast of  Africa northwards, Gulf of Aden included, across to the Tuamotu Islands, north to southern Japan and south to Australia. 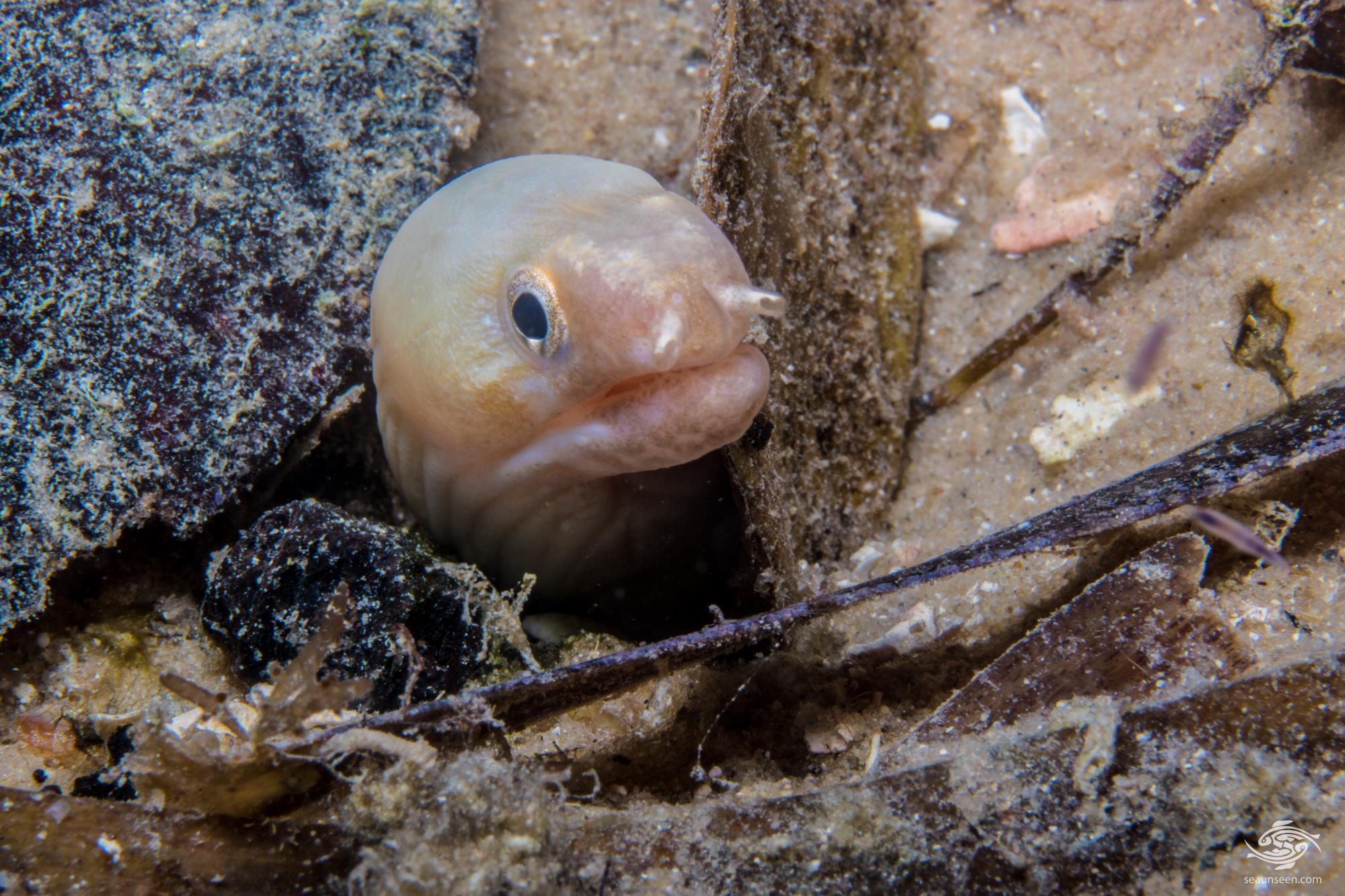 They are found in rocky reefs, coral reefs and occasionally in lagoons provided there is shelter. The adults are usually found from depths of 8 to 15 meters and the juveniles are found close to shore.

The Whitemargin moray eel is carnivorous, and does most of its hunting at night.  They feed mainly on small fish and crustaceans. Moray eels have a second set of jaws in their throat called pharyngeal jaws, which also have teeth. When feeding, morays latch onto the prey with their outer jaws. They then push their pharyngeal jaws which are set back in the pharanx, forward into the mouth.

They then grasp the prey and pull it into the throat and stomach. Moray eels are the only fish that use pharyngeal jaws to capture prey. Their main hunting tool is their excellent sense of smell which makes up for their poor eyesight. This means that weakened or dead creatures are the moray eel’s favored food. 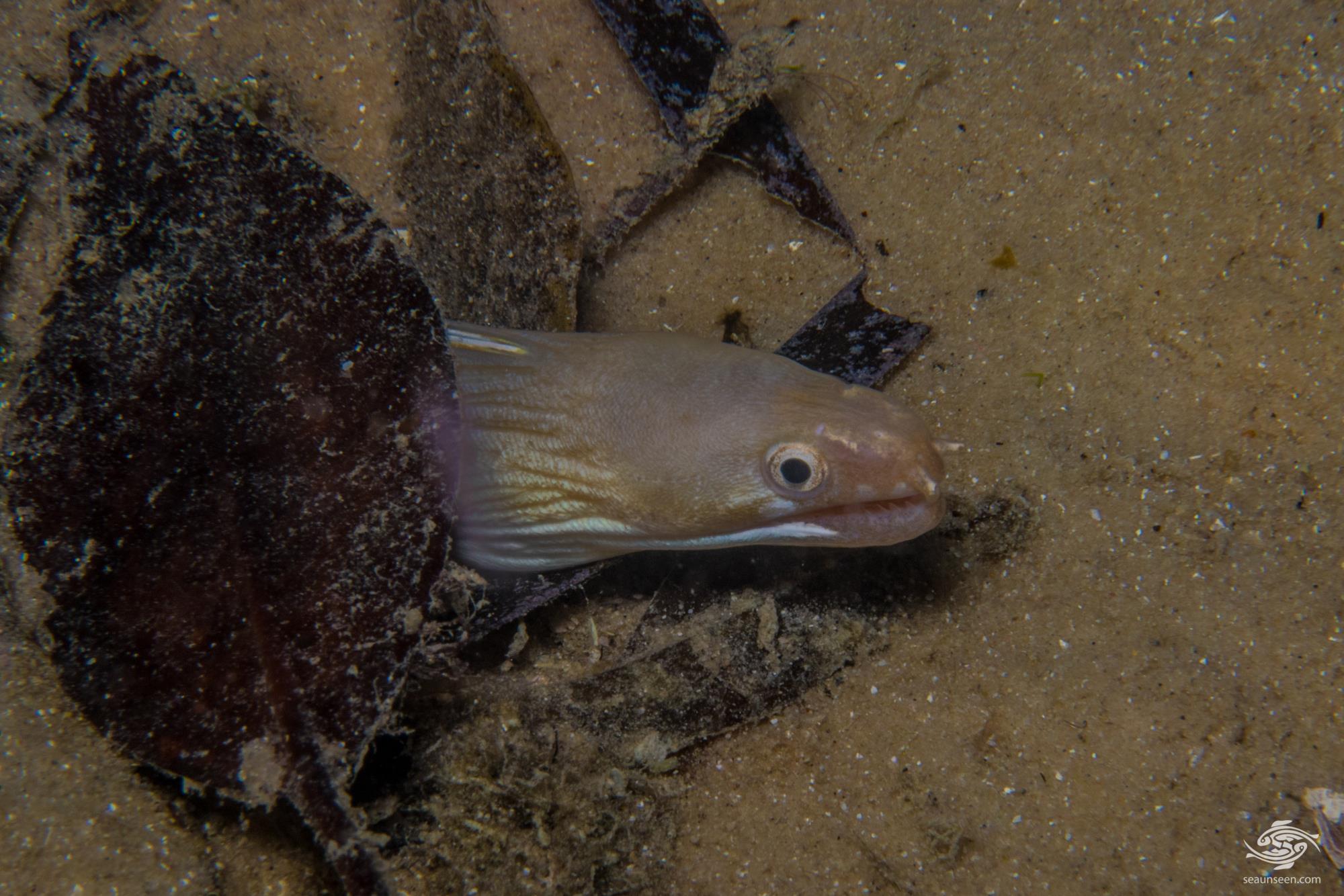 Studies have shown hermaphroditism in Whitemargin moray eel, some being sequential and others  synchronous which can reproduce with either sex. Courtship usually occurs when water temperatures are high. After posturing to each other they wrap their bodies around each other and simultaneously release sperm and eggs. Once they hatch the larvae float in the ocean for around 8 months before becoming elvers and eventually a moray eel.