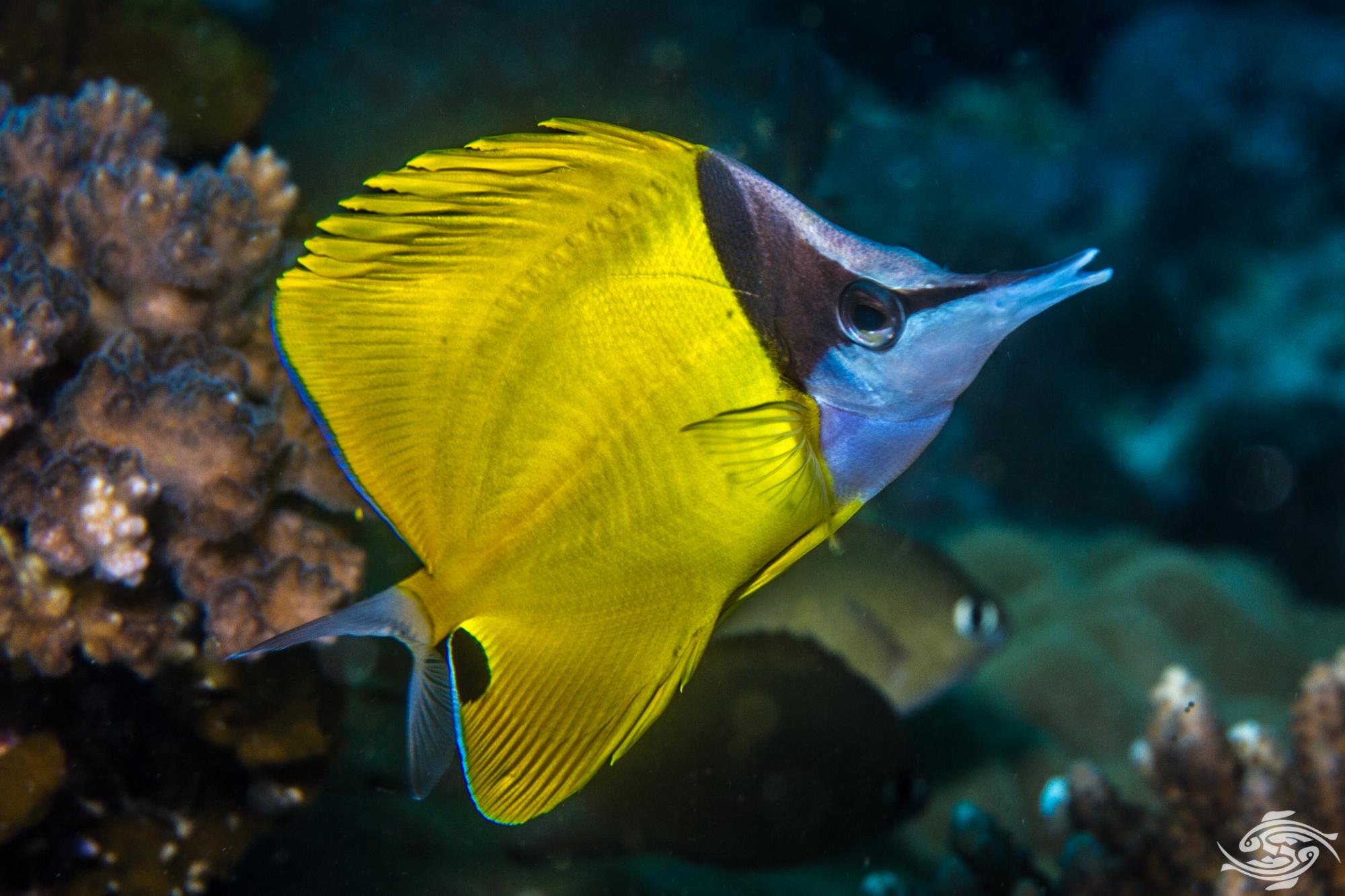 The Yellow Longnose Butterflyfish (Forcipiger flavissimus) also known as the Forceps butterflyfish, is much sought after by aquarists. Their exotic looks as well as their  peaceful demeanor, ease of feeding and the fact that they are reasonably reef safe makes them an attractive asset in any aquarium. 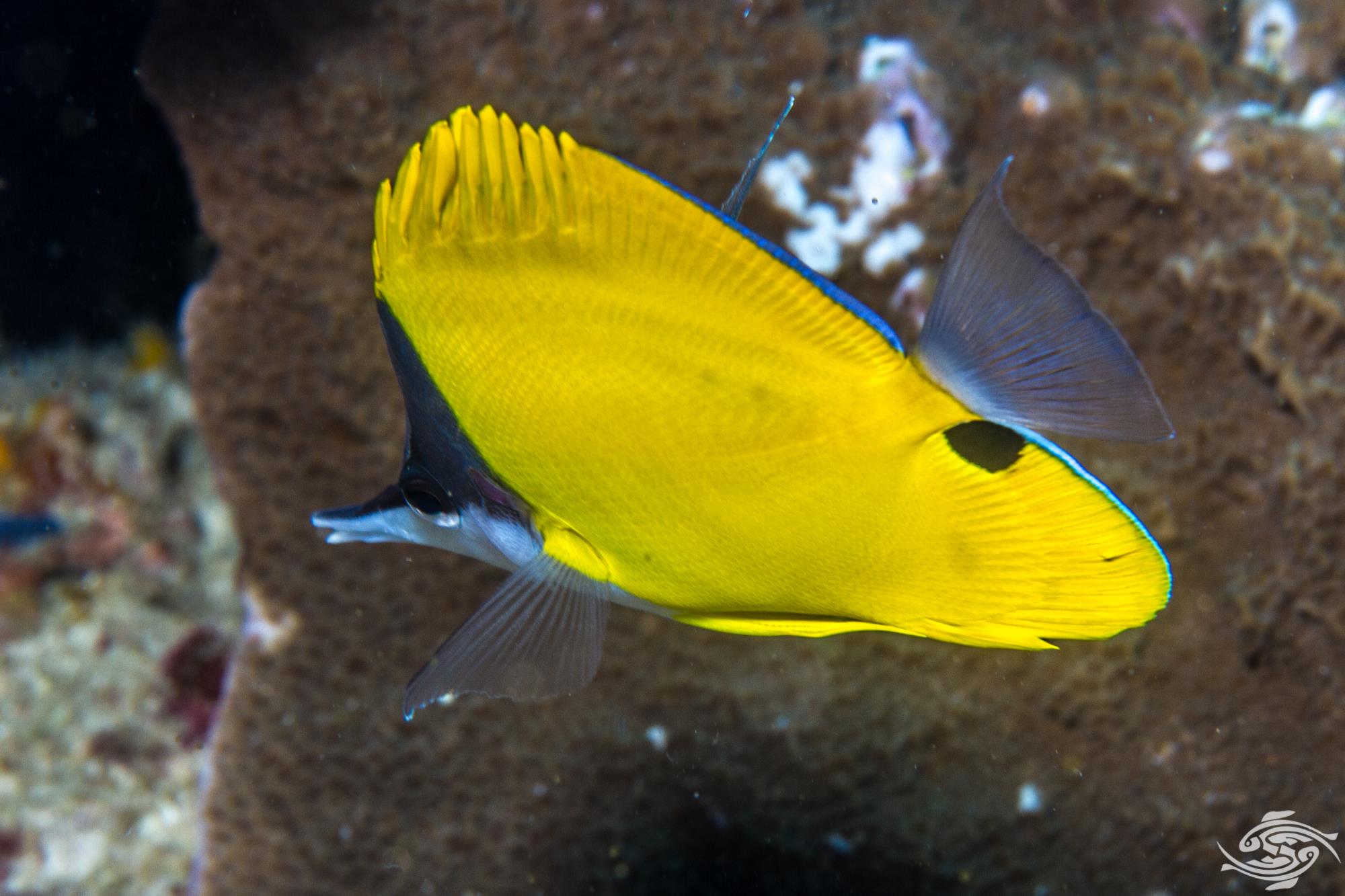 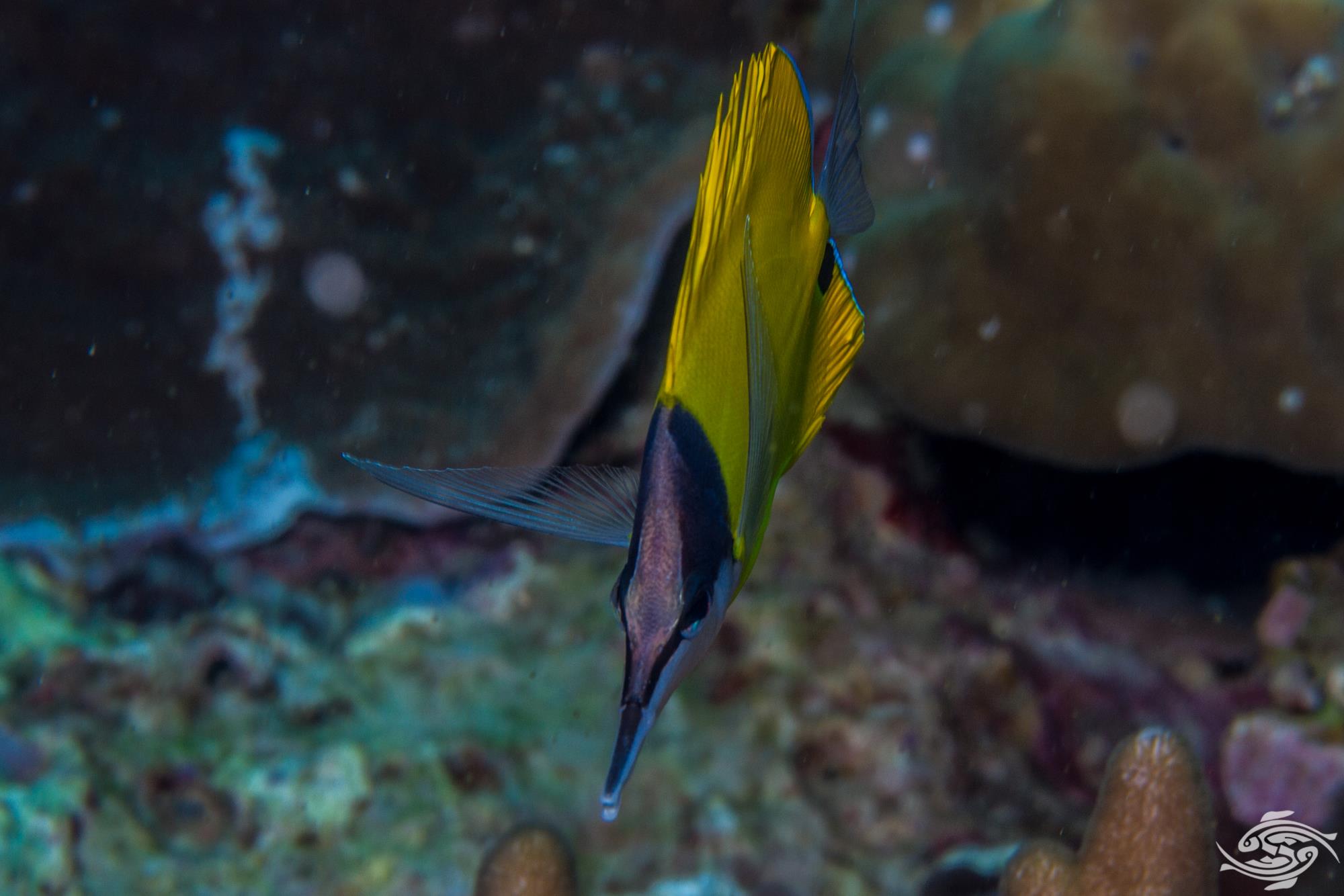 Yellow Long nose butterflyfish are seen singly and in pairs and often in small groups where the groups do not seem to be groups of pairs as often seen with other butterflyfishes. Overall they are more often seen solitary than other species of butterfly fish. They will also sometimes join pairs of other species of butterflyfishes as they move across the reef feeding. They are known to use acoustic signals in territorial defensive behavior and can emit sounds through fast body movements which seem to compress the swim bladder. A larger fish is able to emit louder sounds than a smaller fish allowing the larger fish to dominate the territorial dispute. They emit at least three types of sounds. 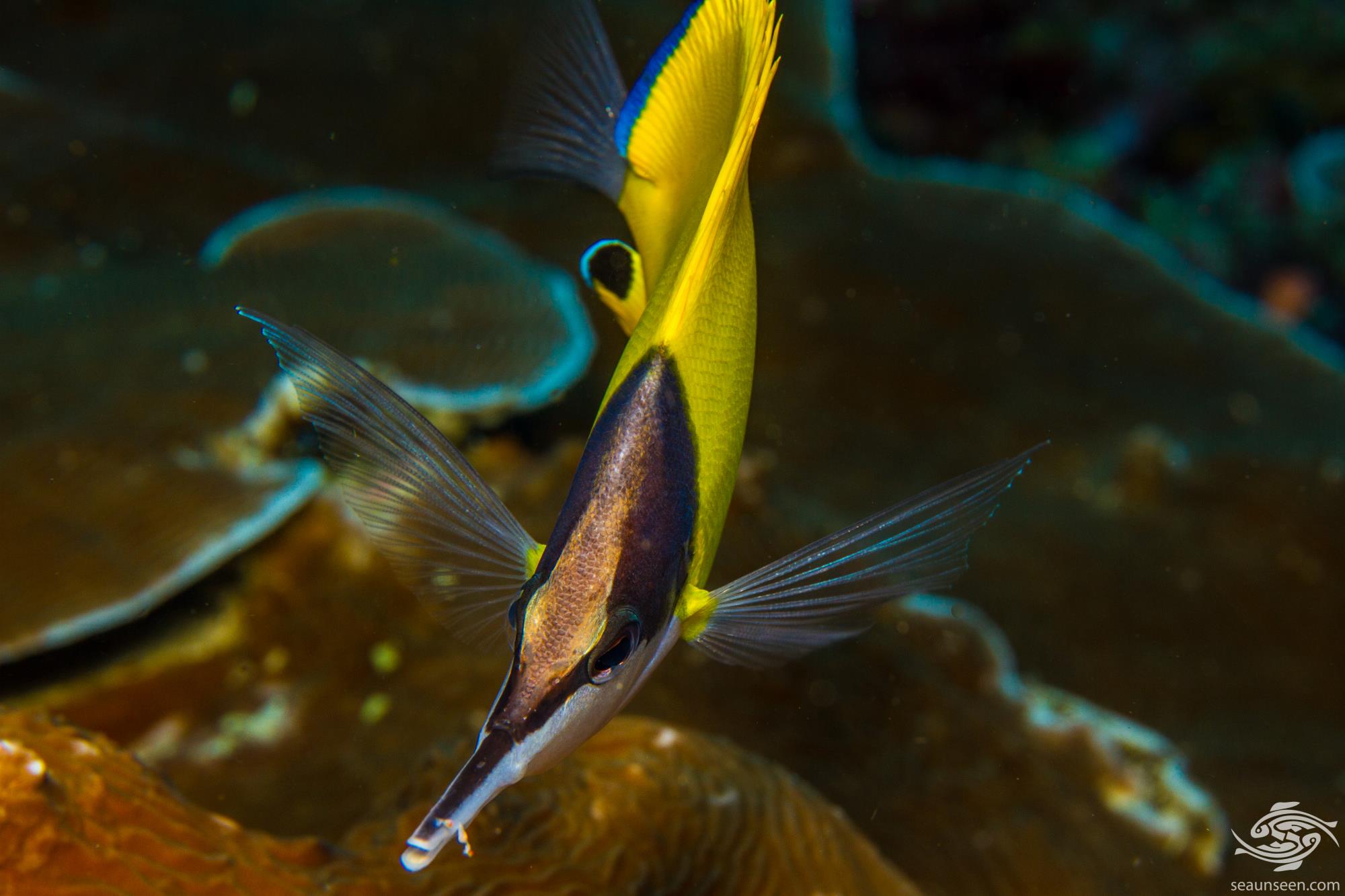 When they feel threatened they are quick to erect their dorsal fin and twist the body towards the threat. They will allow divers to get fairly close to them, but are quick to dart into cover or under an overhang, where they are sometimes seen swimming upside down or sideways.

If one watches them feeding in small shoals of three to four fish over the reef, when they move into the territory of for example the jeweled damsel fish, Plectroglyphidodon dickii, which is highly territorial and chases any small fish that comes into its territory, the damsel will chase one of the shoal out the area. The balance continue feeding in the damsels territory. This shoaling seems to give an advantage in this fashion. 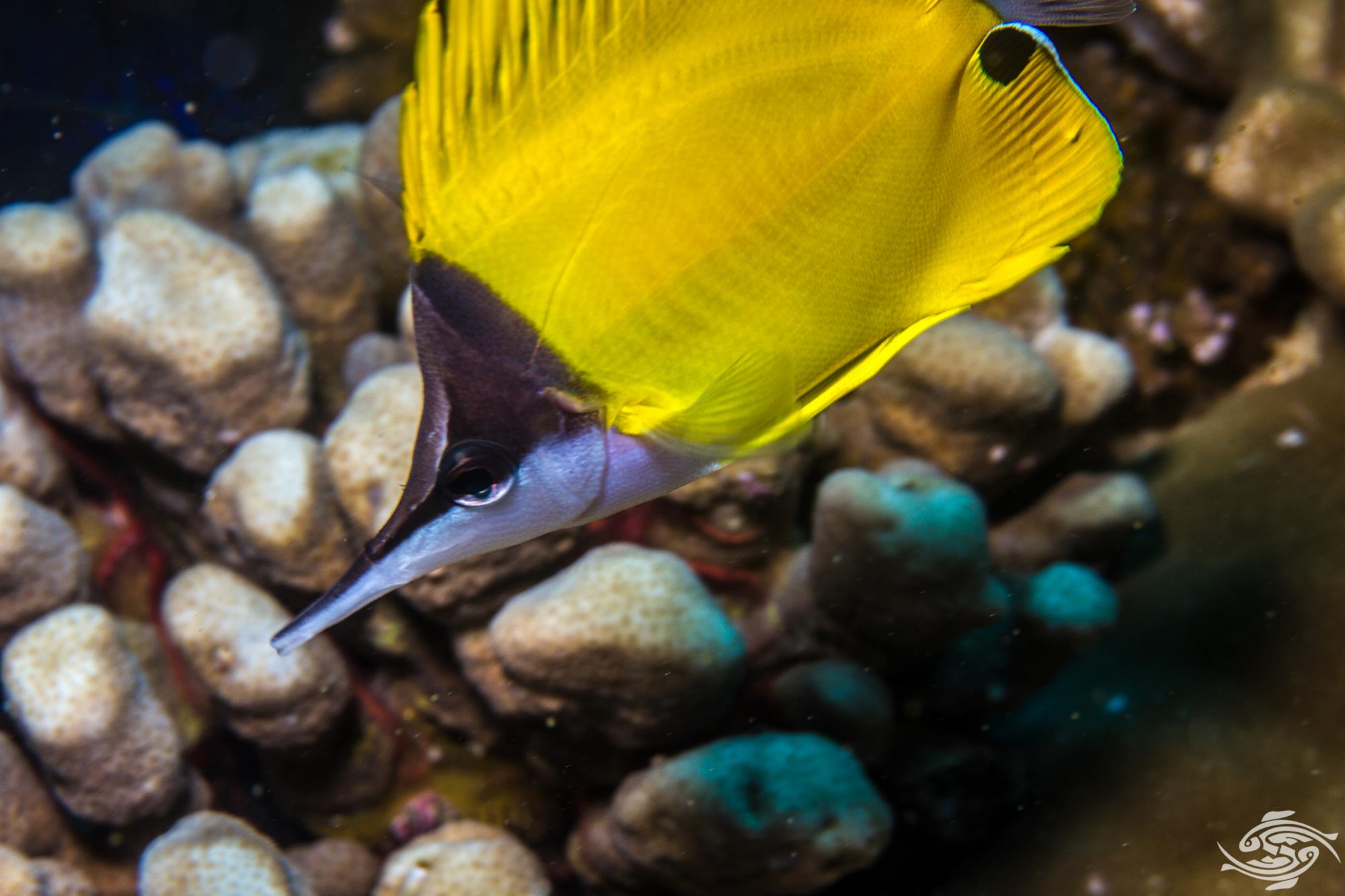 Yellow long nose butterflyfish are a widely distributed species. They are found throughout the tropical waters of the Indo-Pacific area from the east coast of Africa and the Red sea north to Japan, south to Australia and Micronesia and across to California including the Galapagos, Hawaii and the Revillagigedo islands.

They are usually found on exposed coral reefs browsing above the reef surface and never venture far from cover. They are found from 2 meters to 120 meters in depth. 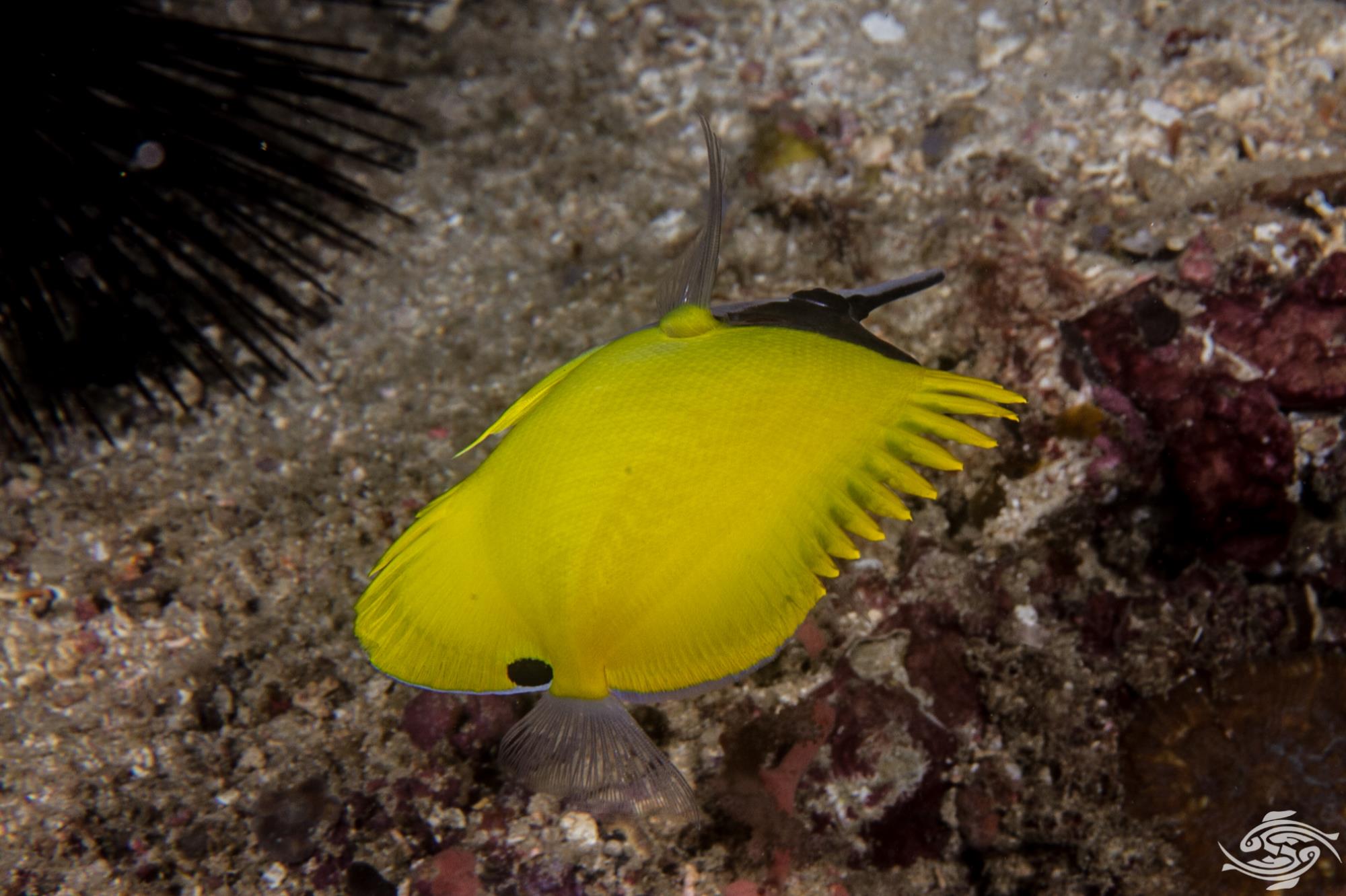 They use their snout which has a powerful set of teeth on the end, to rip off tentacles from bristle worms and the tube feet off of sea urchins. They also eat small crustaceans. 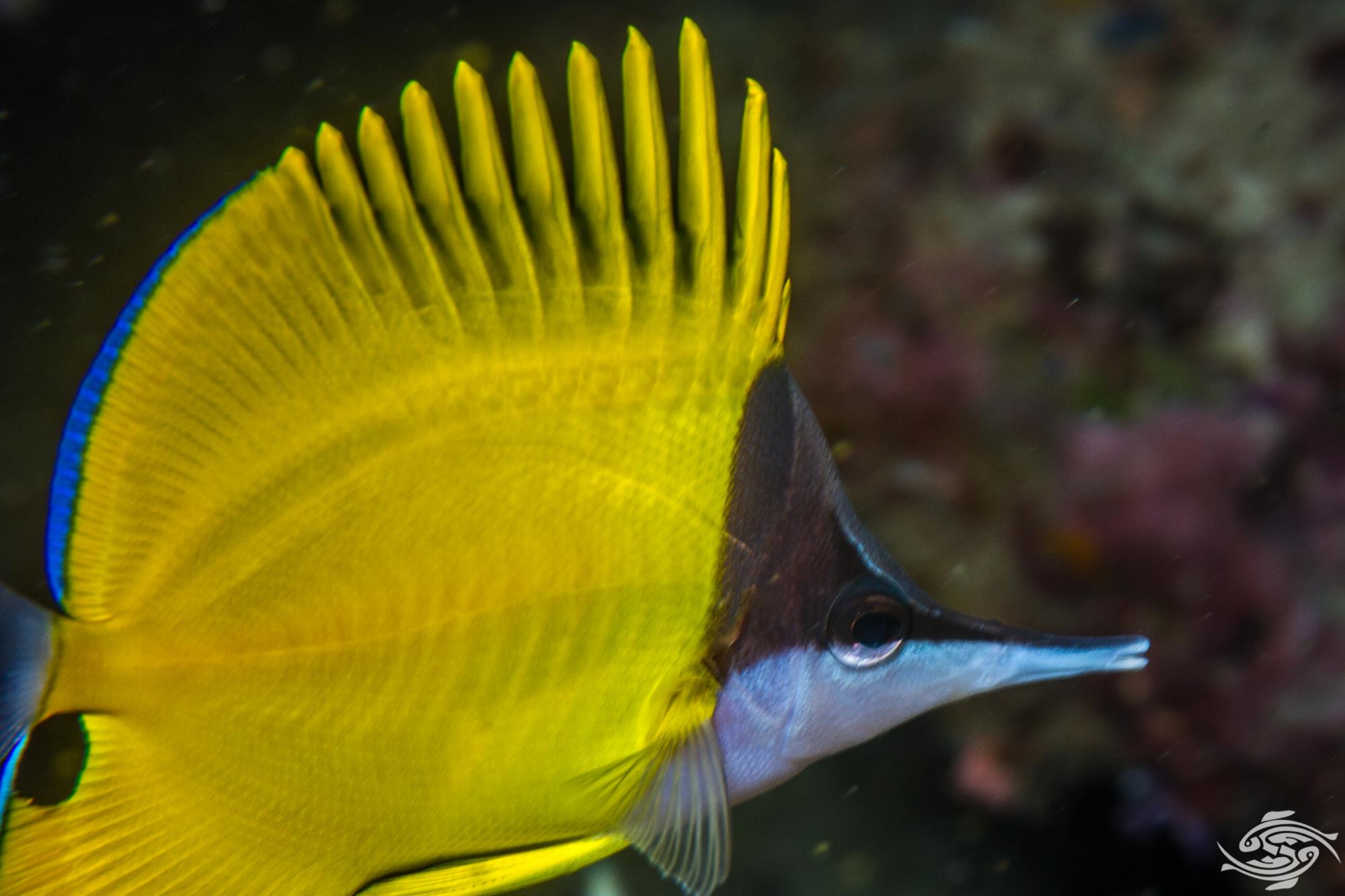 Yellow long nose butterflyfish form monogamous pairs, as do many other butterflyfishes and are sometimes seen in small groups. They are seen singly more often than other butterflyfish. Spawning is thought to take place in relation to the lunar cycles but this is not certain. The eggs are spherical and buoyant and it is thought they hatch in 28 to 30 hours. Once the eggs hatch a bony plate forms over the head area and the larvae are pelagic for quite some time, before developing into juveniles. This pelagic stage has made it difficult to breed them and there are no reported cases of breeding by aquarists. 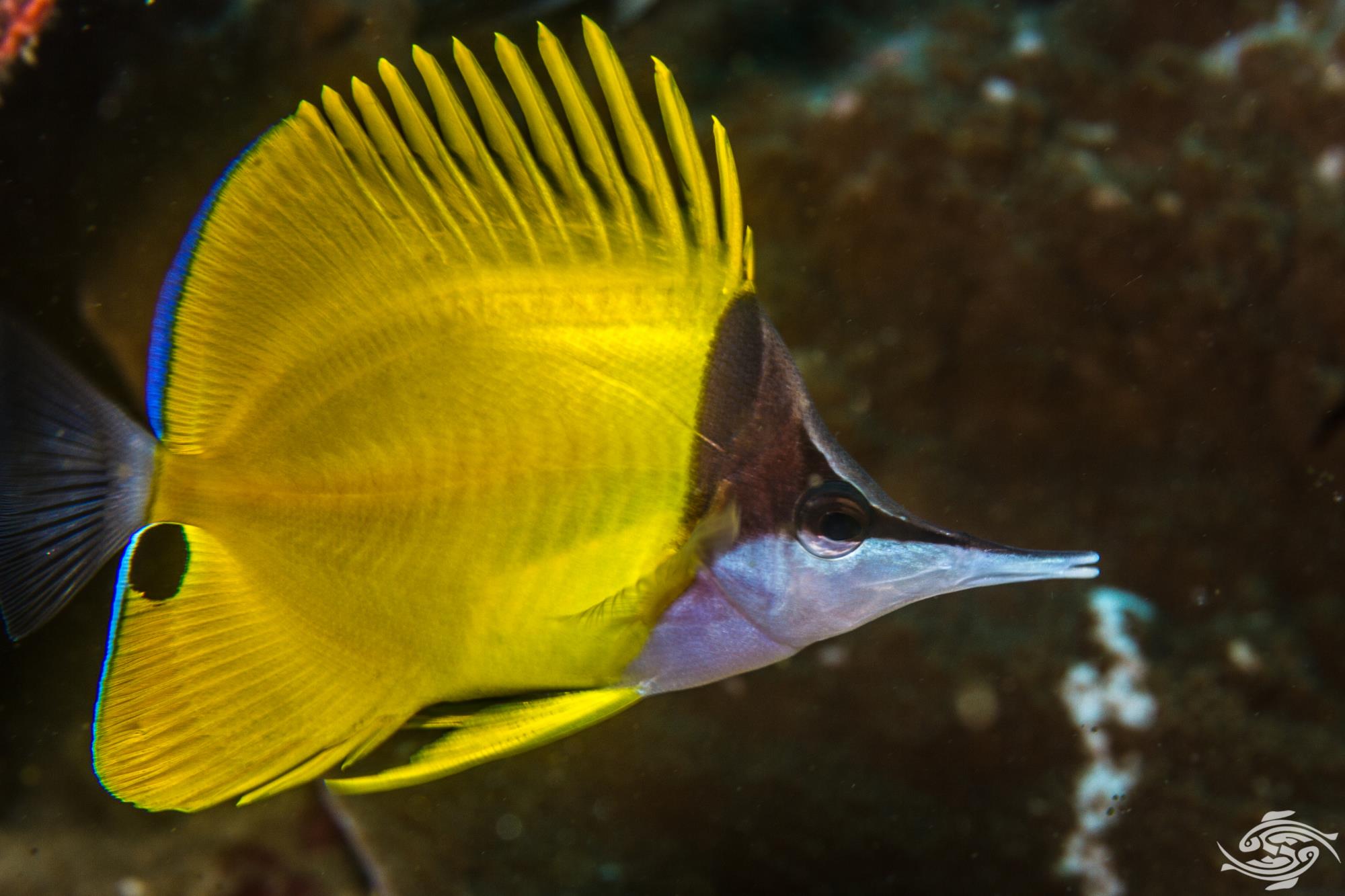 Because they are not fussy eaters Yellow long nose butterflyfish are one of the easier butterflyfishes to keep in an aquarium. As long as they have a fair amount of living room and some hiding spots they are happy. They readily eat frozen shrimp and general frozen preparations for carnivorous fish. Regular feeds of live rock are good for their health.

It is best to only keep one of these fishes in a tank, as they are highly territorial. They will fight with other fishes that they deem a threat to their food source. Among these are the big yellow long nose butterflyfish or even their own species. They are not as effective at controlling Aiptasia anemones as the copperbanded butterflyfish is but will eat some. 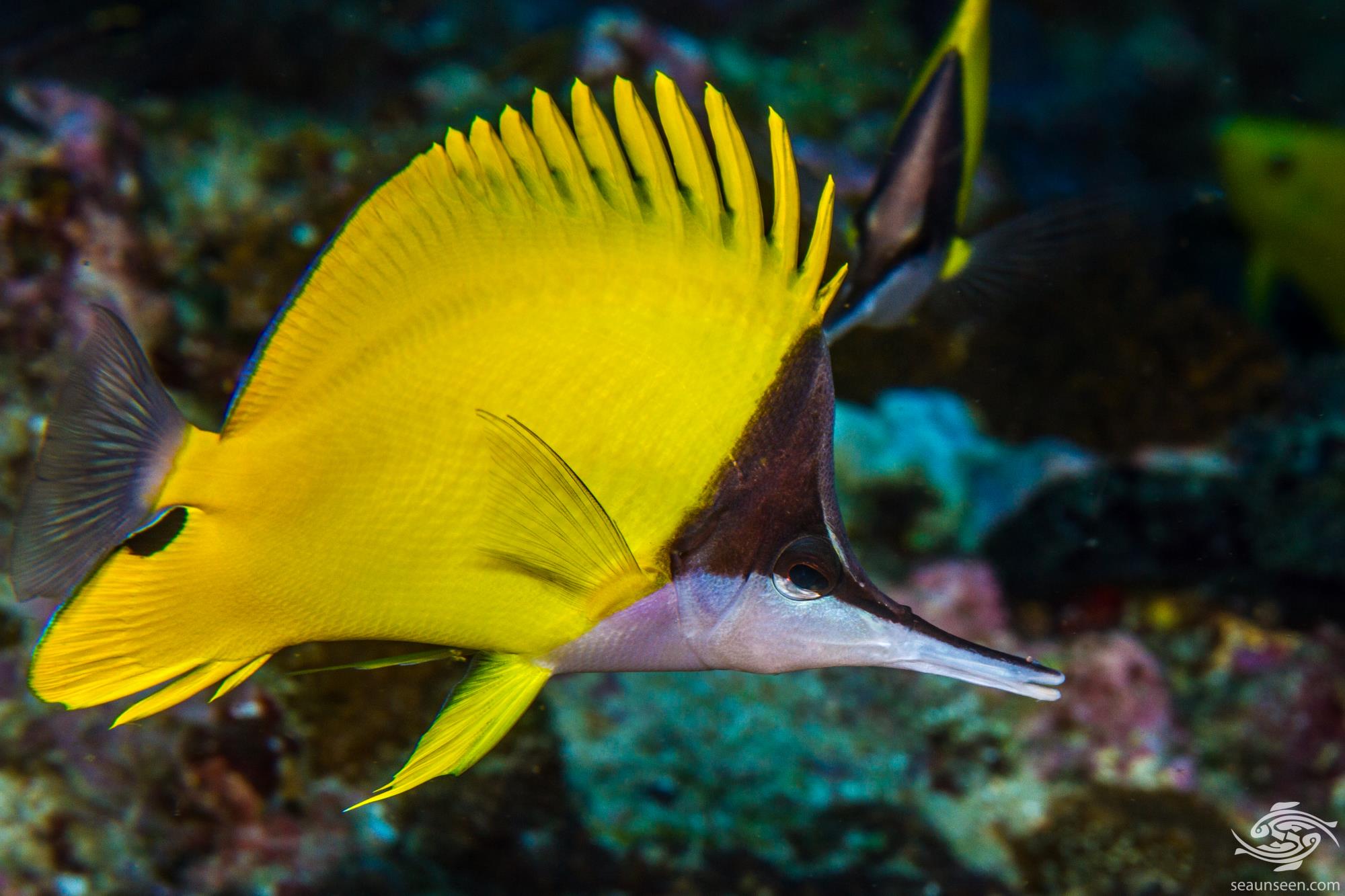 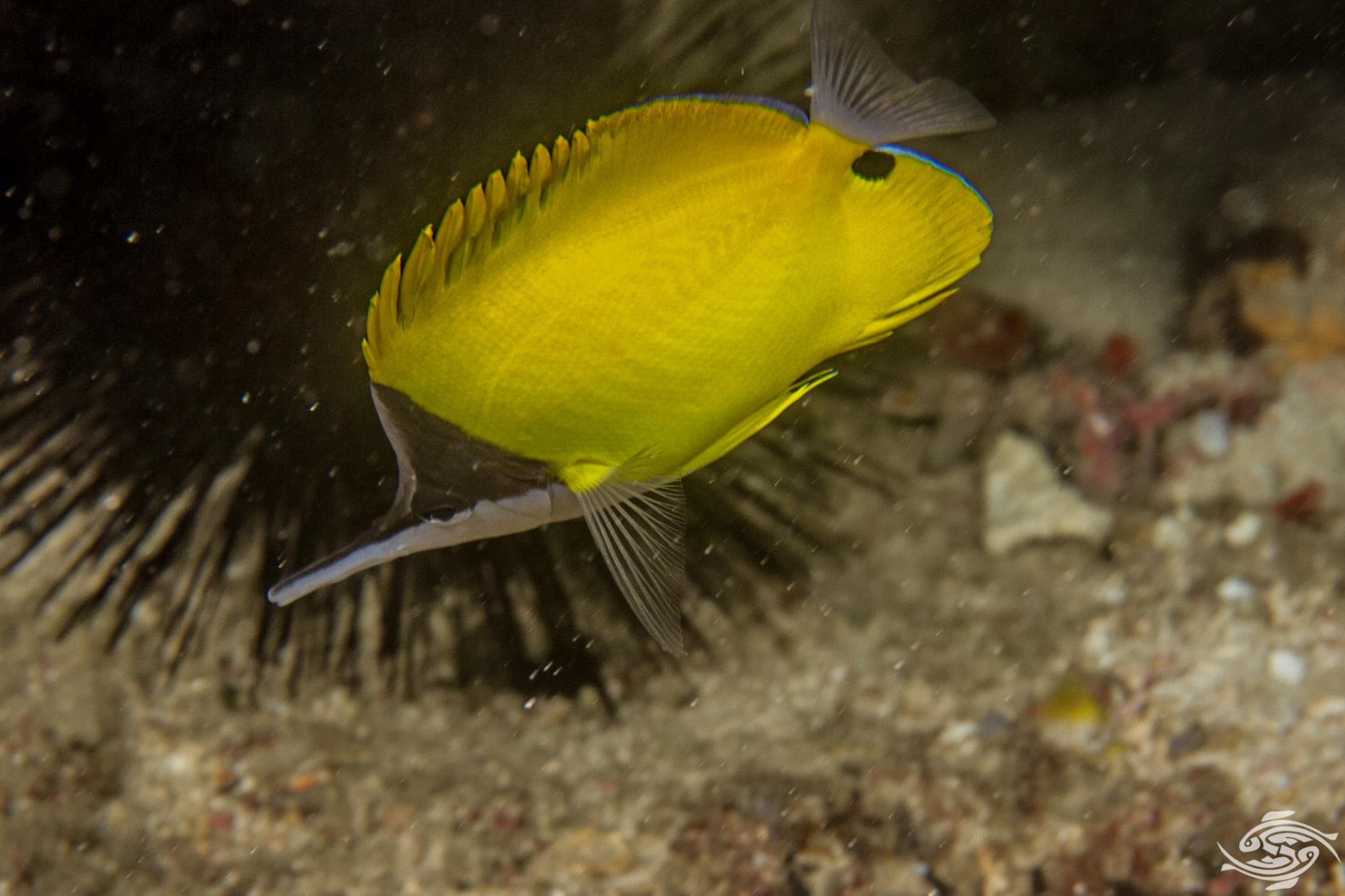