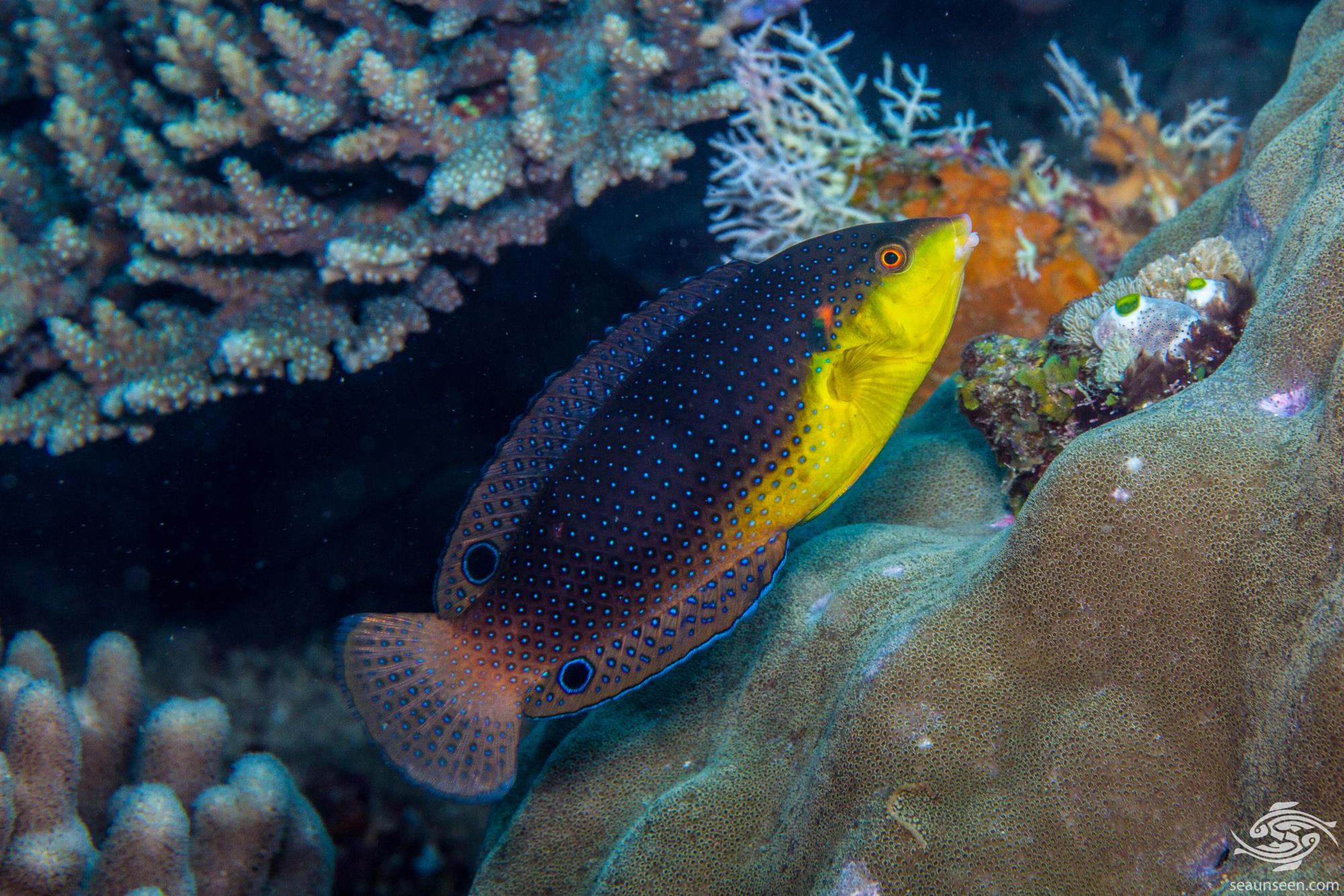 The Yellowbreasted wrasse (Anampses twistii) is also known as the Twister Wrasse or Twist’s Wrasse. They are fairly common inhabitants of the reef tops in Tanzania. 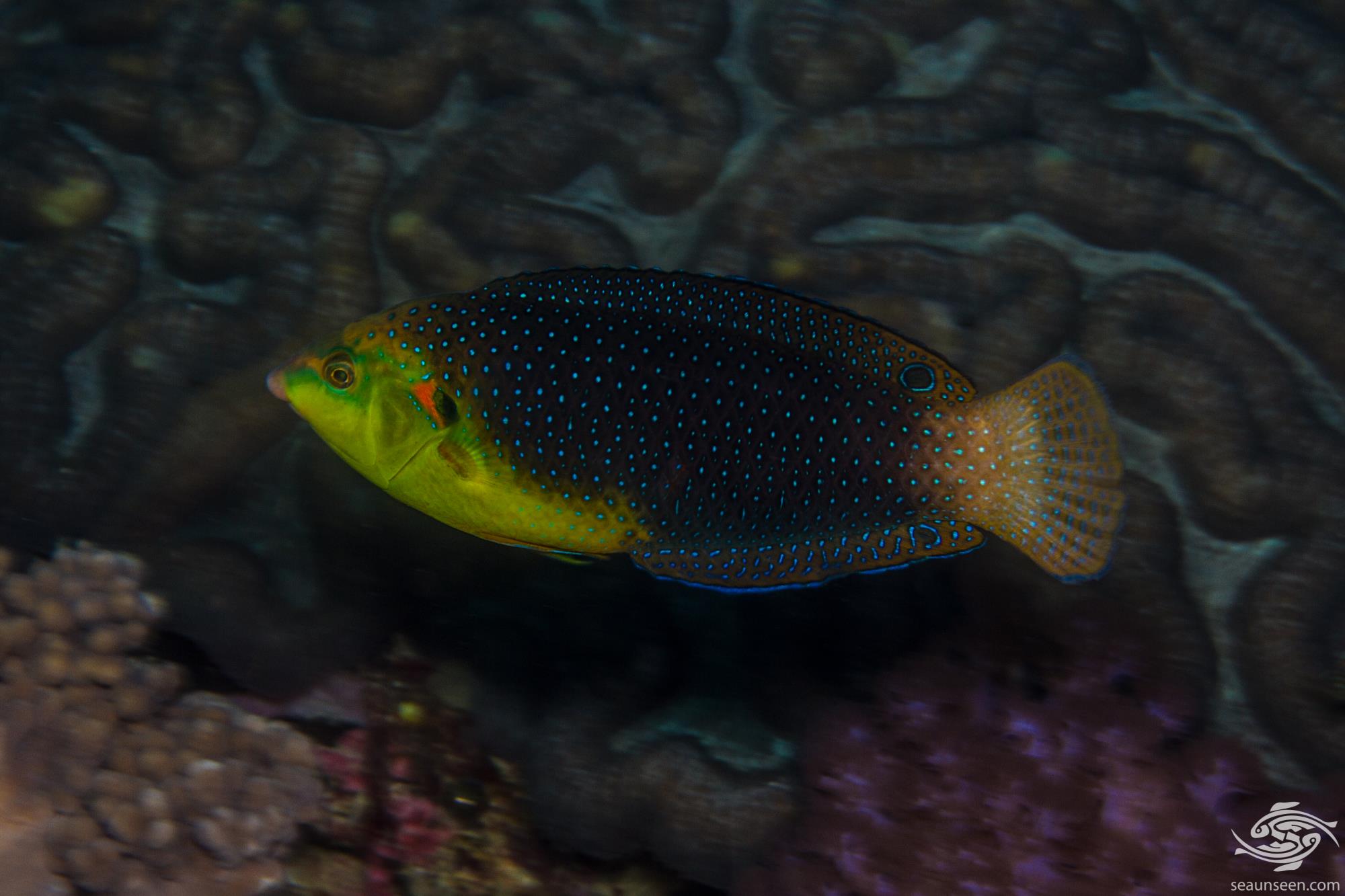 Unusually for the Anampses genus , the Yellowbreasted wrasse has very little difference in looks between its various stages. No small Anampses males have ever been discovered and it is assumed that the dominant mature females change into males.

On the larger males as pictured above, green lines appear on the face below and above the eye. The colors on the males are more vibrant and they can be substantially larger than the average females. The orange patch just forward of the pectoral fins is larger and more brightly colored. 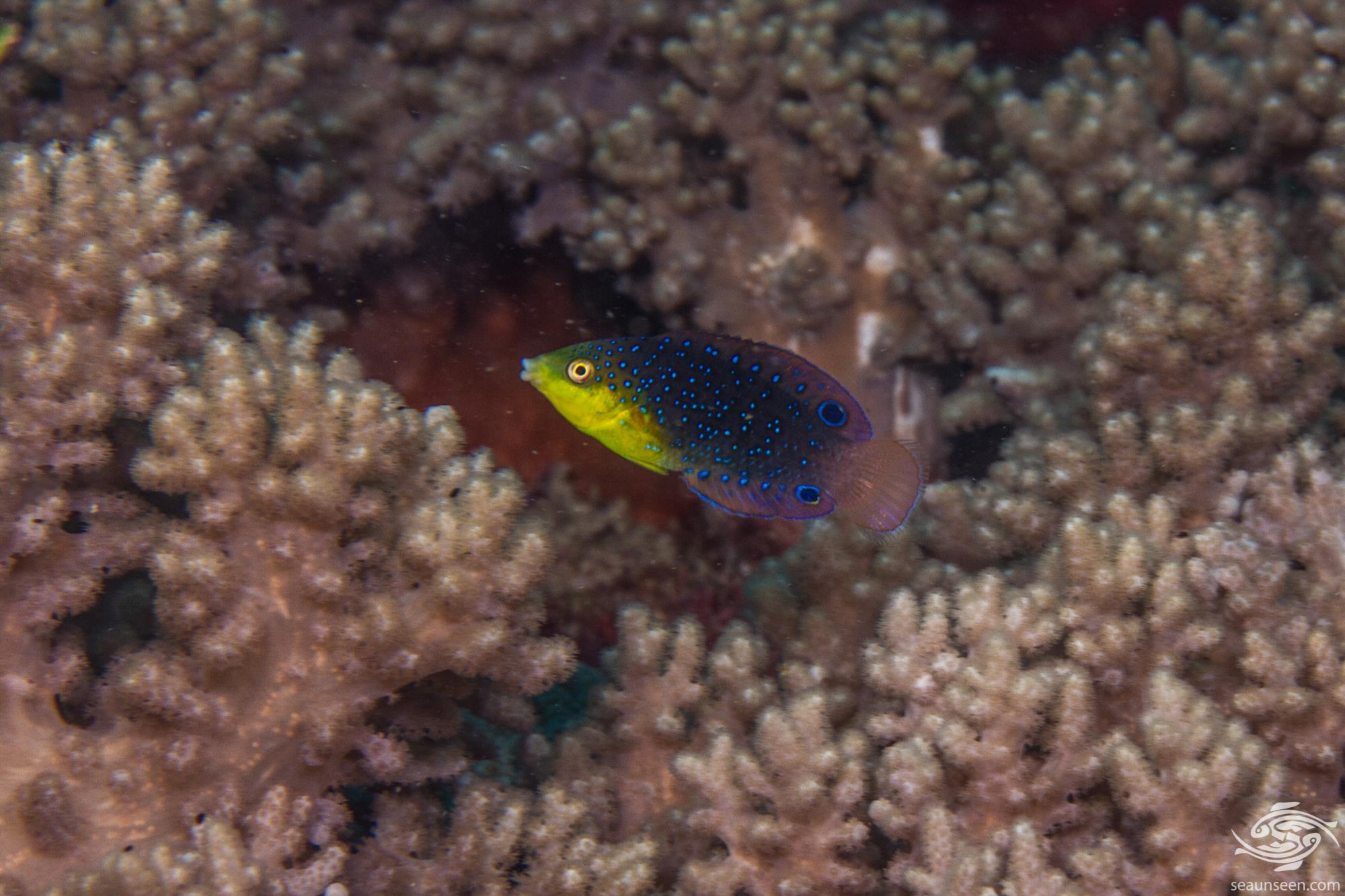 YELLOWBREASTED WRASSE IN THE WILD

The Yellowbreasted wrasse is fairly common on Tanzanian reefs between 10 and 18 meters.  Contrary to reports from other areas on this fish , the females are usually in groups of two to three and often feed with other wrasse species and goatfish. This can be seen in some of the images below. They are very quick to hide and if threatened will bury themselves in the sand, which is where they sleep at night.  They are quite difficult to photograph well and it has taken quite some time to put the images in this post together.

The males which are larger are always singular and are far more active and patrol the reef at quite high speeds. There are less males than females and from personal observation each male seems to have a large territory with several groups of females in it. They are constantly on the move. 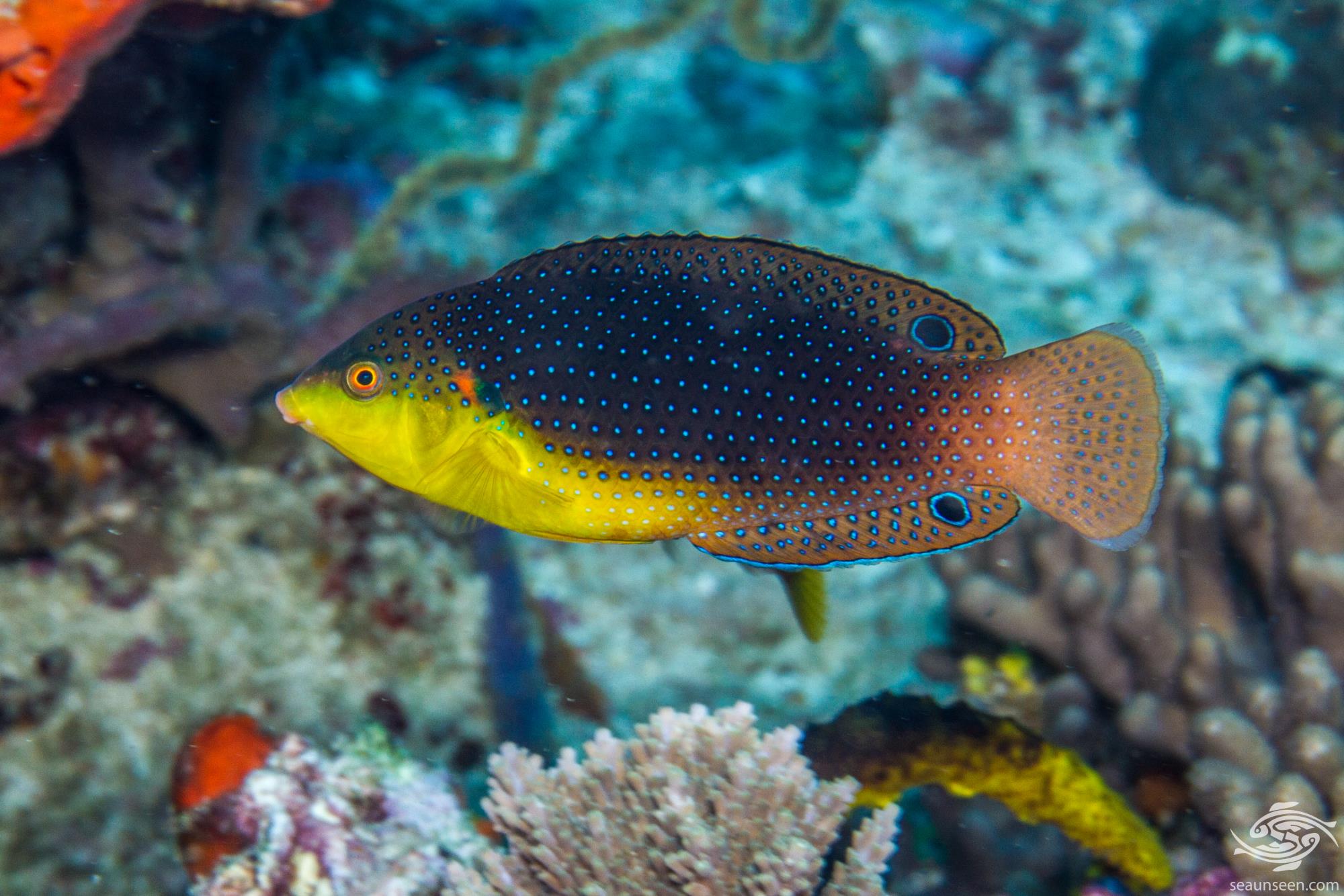 The Yellowbreasted wrasse is found from the East African coast across to Southern Japan and south to French Polynesia, having a relatively large range. They are mainly seen on reef tops and on mixed rubble/rocks/coral areas. They seem more common around the 10 to 18 meter range in Tanzania. We have never seen one deeper than 20 meters. On rare occasions one will see the juveniles on shallow reefs. 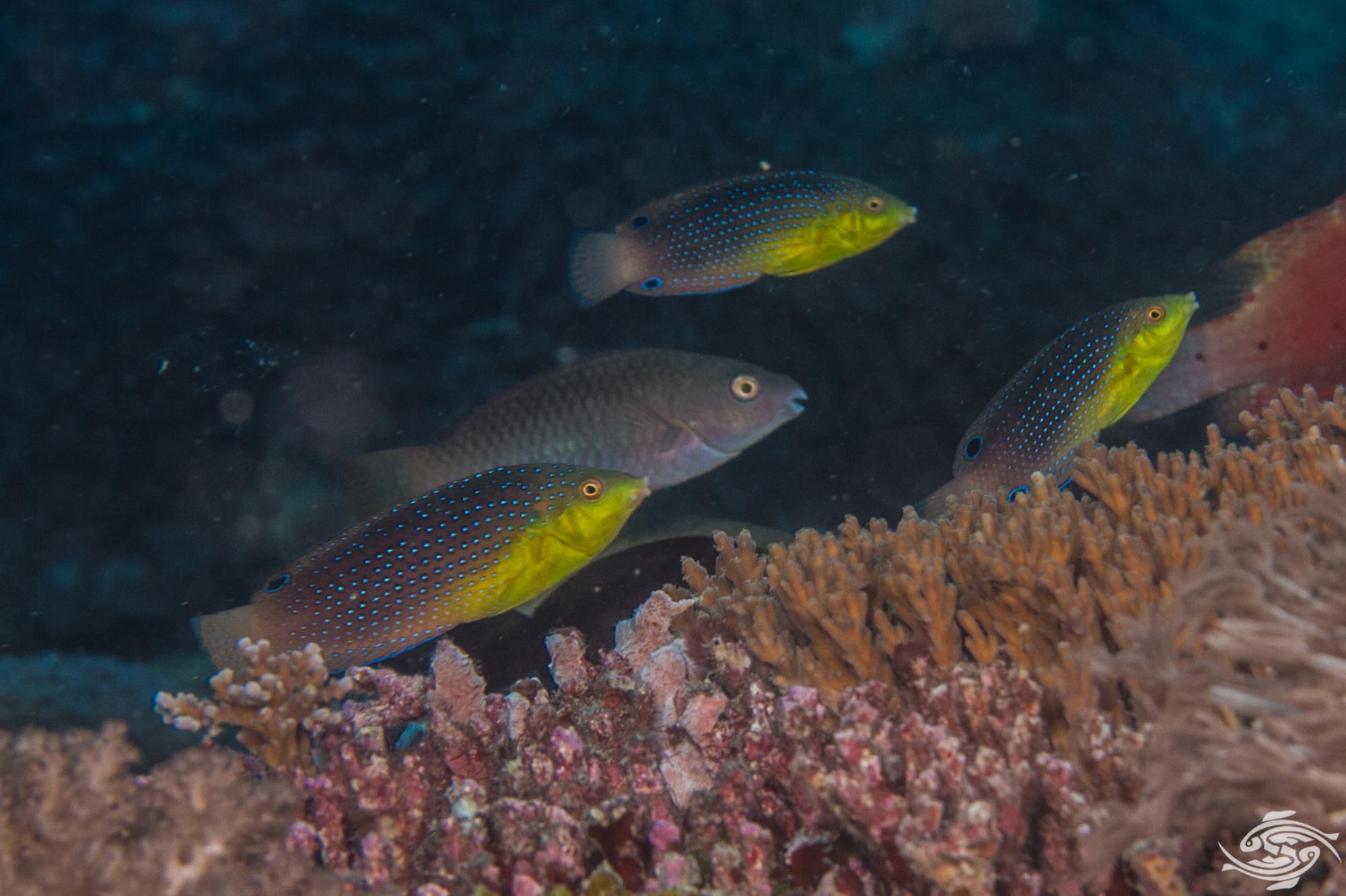 The Yellowbreasted Wrasse feeds on small crustaceans and mollusks. They have specialized teeth for picking them off and as with all wrasse, grinding plates further back from the mouth to crush their hard shelled prey. They sometimes feed on their own in groups of two to three fish but will often follow a shoal of goatfish and other wrasse species feeding across the reef. 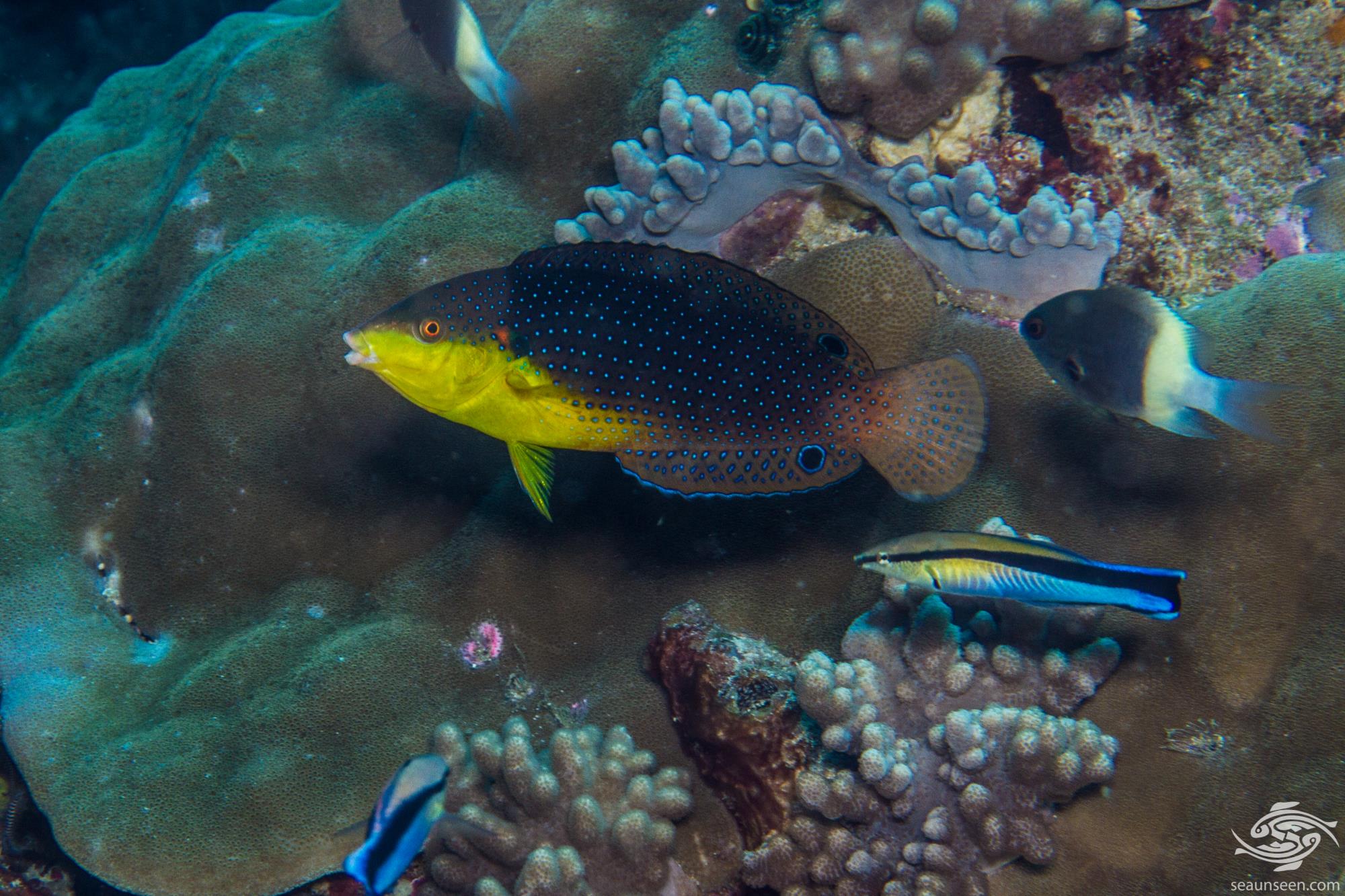 The males seem to retain groups of females in their territories in Tanzania but this seems contrary to observations elsewhere. Distinct pairing takes place. 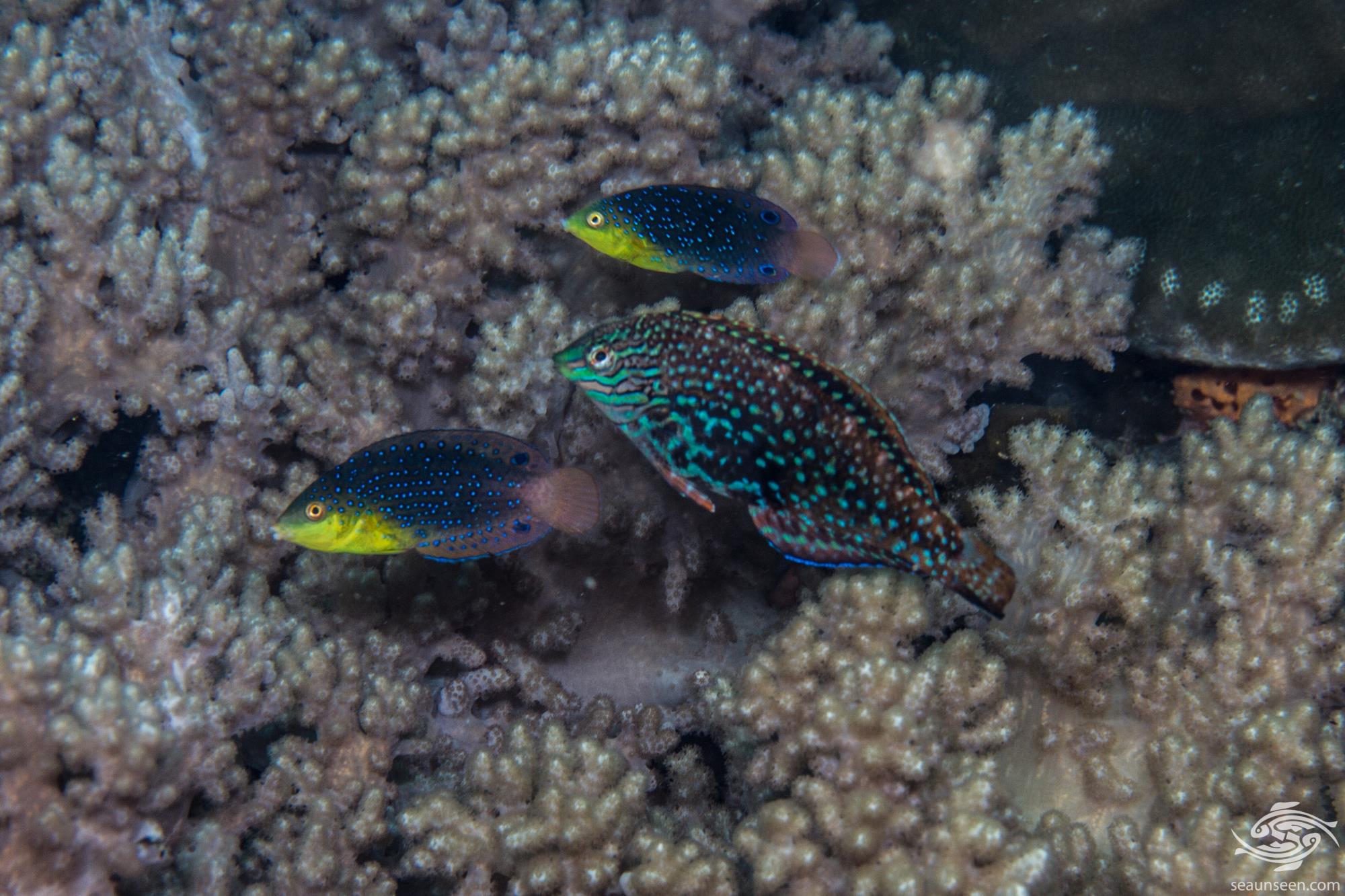 The Yellowbreasted Wrasse are sometimes kept in aquariums but are not that well known in the trade. None of the Anampses species travel well and obtaining a specimen in good condition can be a challenge. This has probably led to their reputation of being difficult to keep. A large tank with suitable peaceful tank mates would be necessary and it may be difficult to wean them onto prepared foods. A large well established tank with plenty of copepods and zooplankton would be preferable. They require plenty of swimming room and a thick base of sand to burrow into at night.  They will jump so the top should be secured. 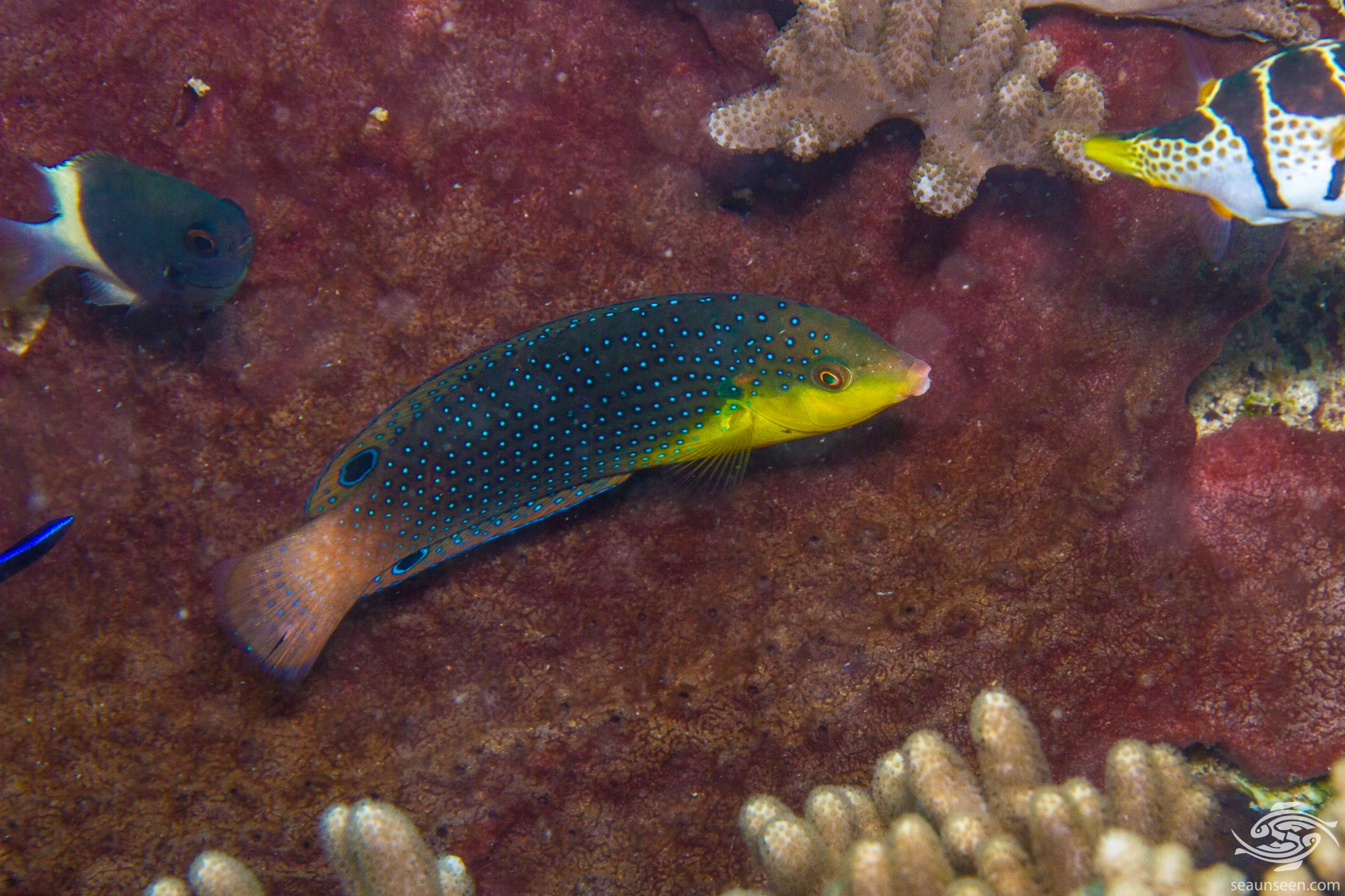