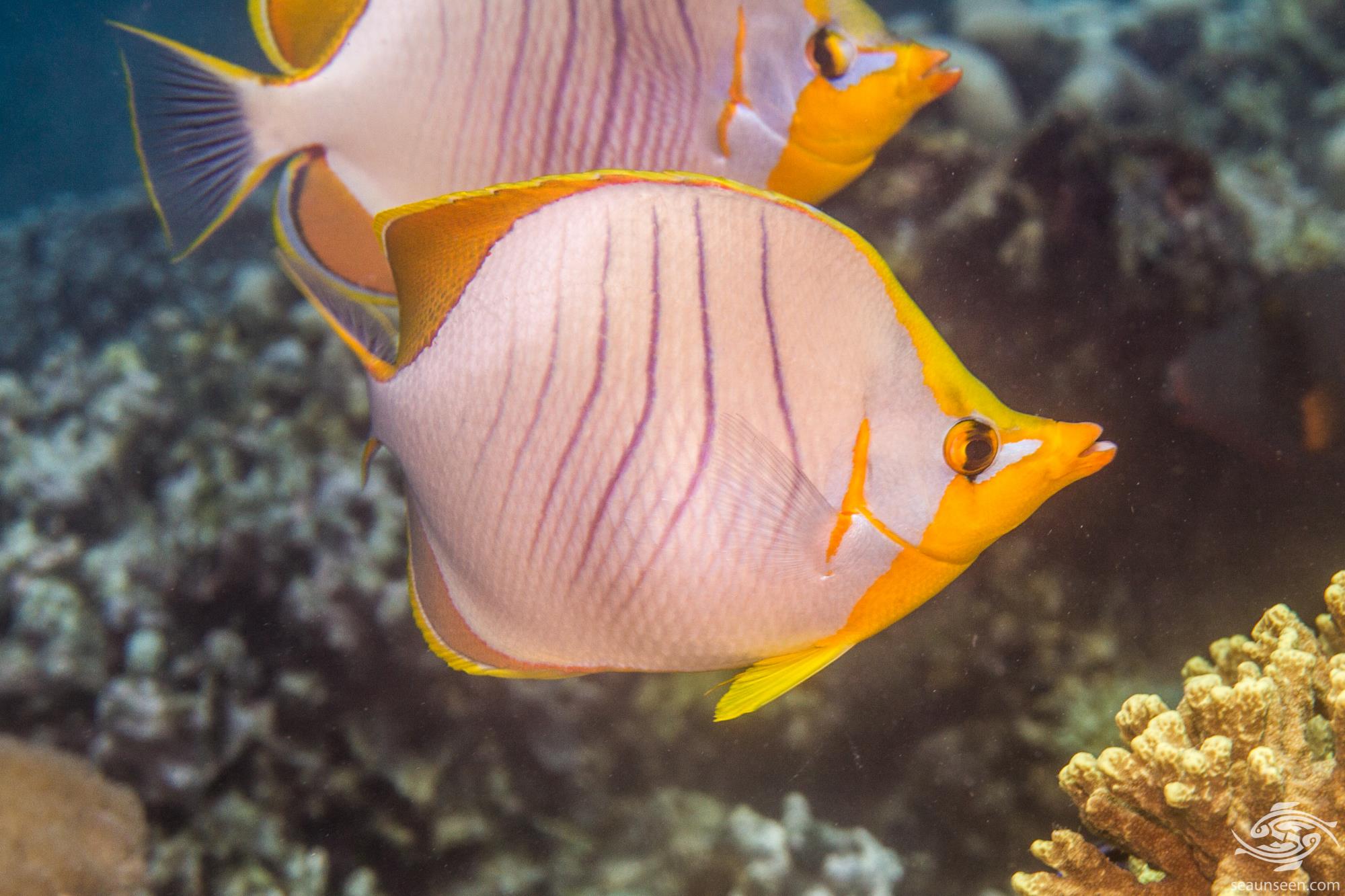 The Yellowhead Butterflyfish (Chaetodon xanthocephalus) is also known as the Goldheaded Butterflyfish and Goldring Butterflyfish.  They are widely distributed but are not common in any part of their range.

The body of the Yellowhead Butterflyfish is a typical butterflyfish shape, laterally compressed and oval with a pointed nose. The main body color is white with six or seven thin purple vertical stripes down the main part of the body. As its name suggests it has a yellow face with yellow stripes extending up onto the dorsal area and down to the pelvic fin. 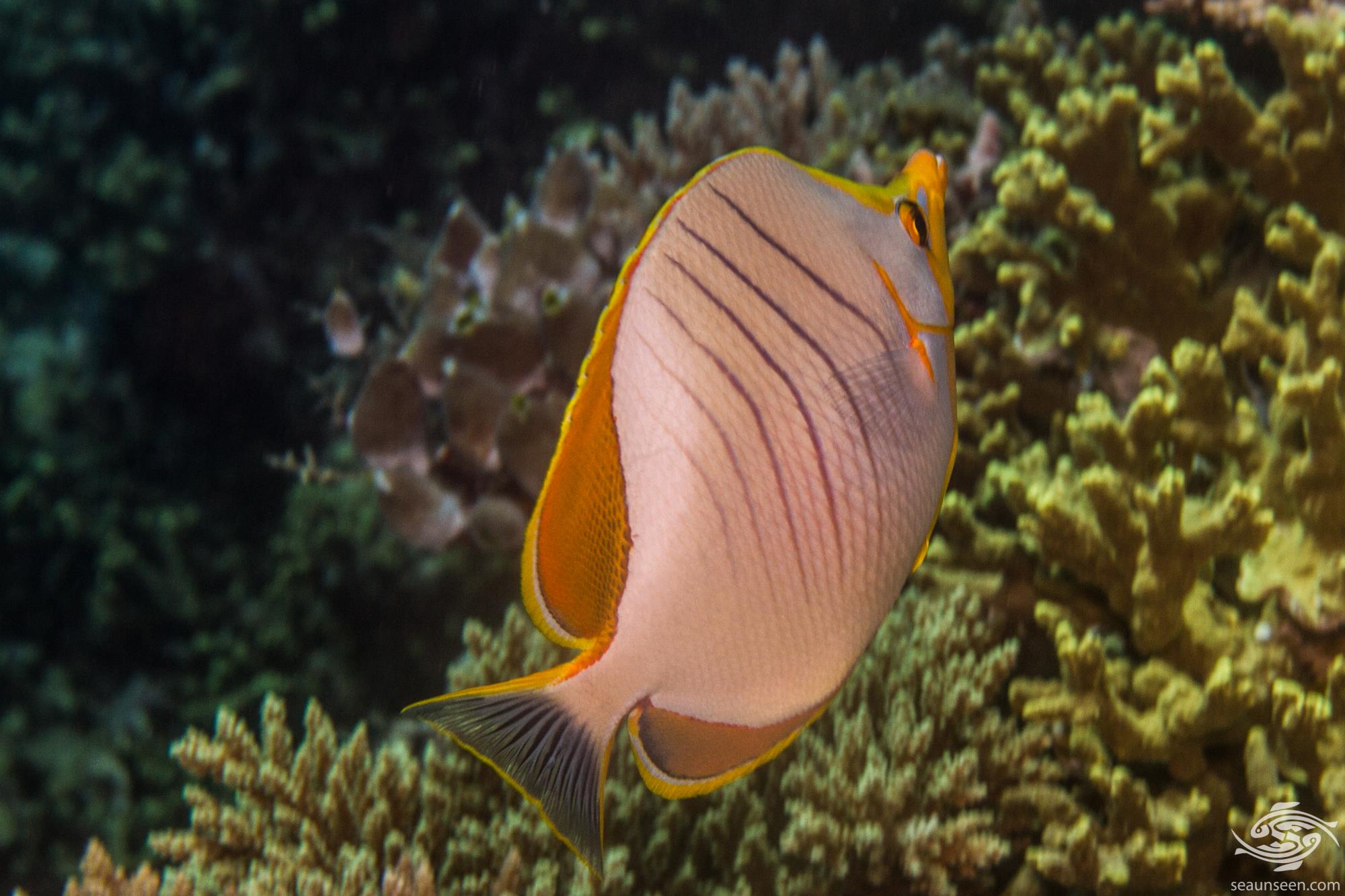 YELLOWHEAD BUTTERFLYFISH IN THE WILD

The Yellowhead Butterflyfish are mainly seen on deeper reefs in Tanzania, often around isolated coral heads. They are usually seen in pairs but sometimes are seen singularly. On rare occasions small groups of five or six fish are seen. Small juveniles are seen singularly in the shallows on protected reefs often in turbulent areas and are very reclusive making them difficult to photograph.  In Tanzania the adults are usually found on isolated coral rich coral heads with a fair amount of current from 12 meters downwards. 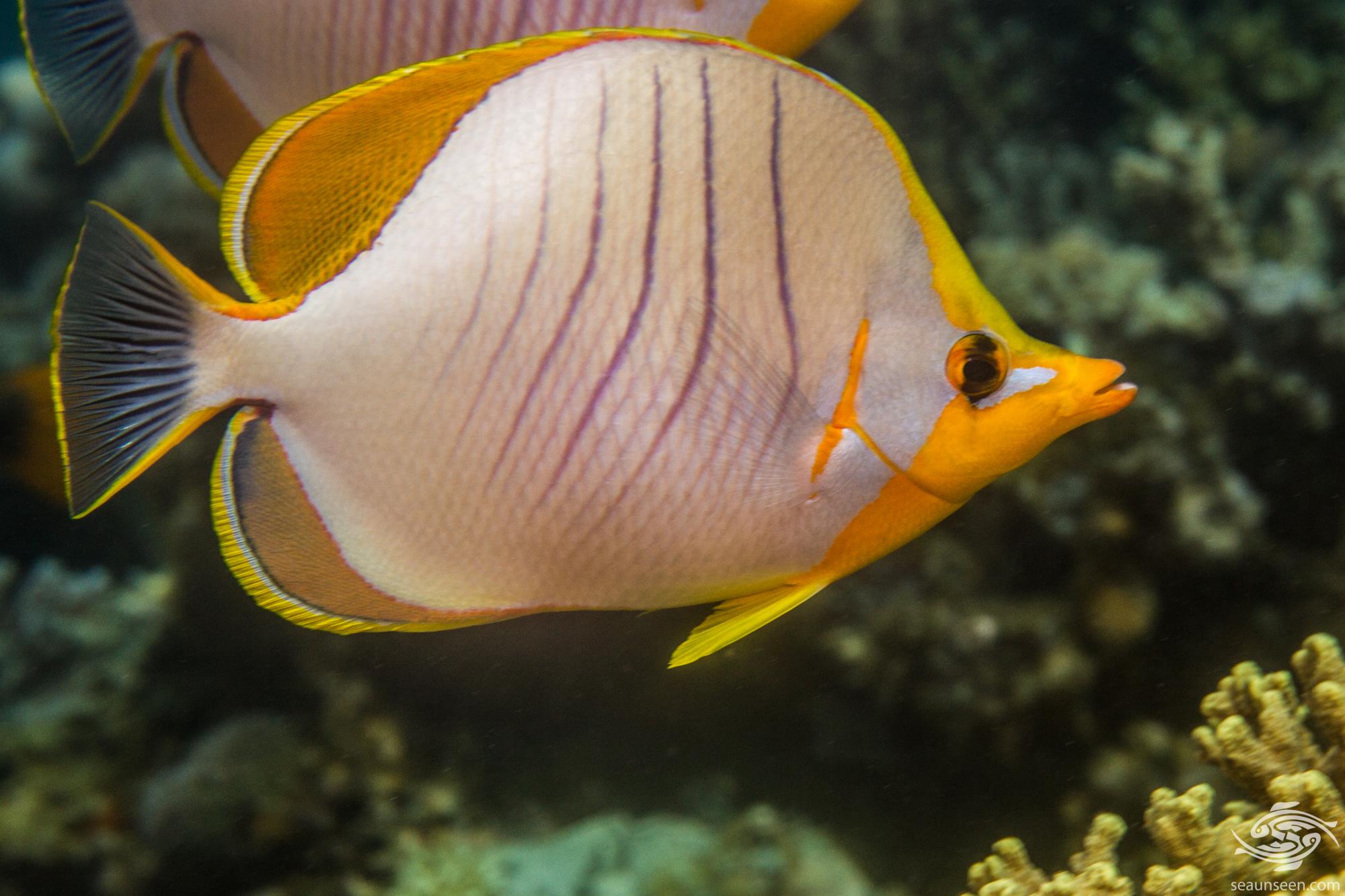 Yellowhead Butterflyfish are found only in the Indian Ocean from the East Coast of Africa to Sri Lanka including the Maldives and Myanmar and west coast of Thailand.  They are  found from 2 to 30 meters in depth but in Tanzanian waters adults are more common below 12 meters. 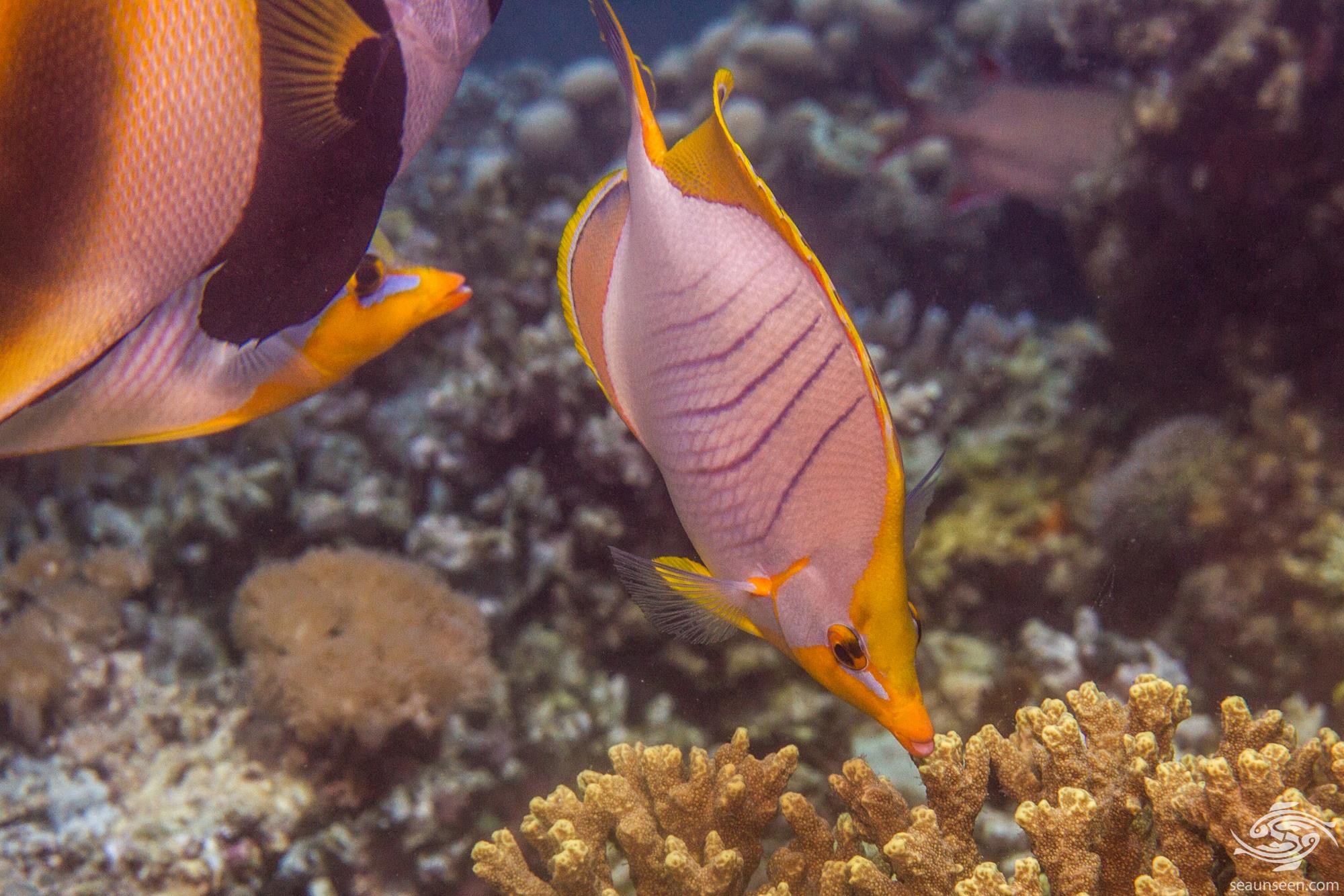 Yellowhead Butterflyfish are omnivores and feed on algae and coral polyps. 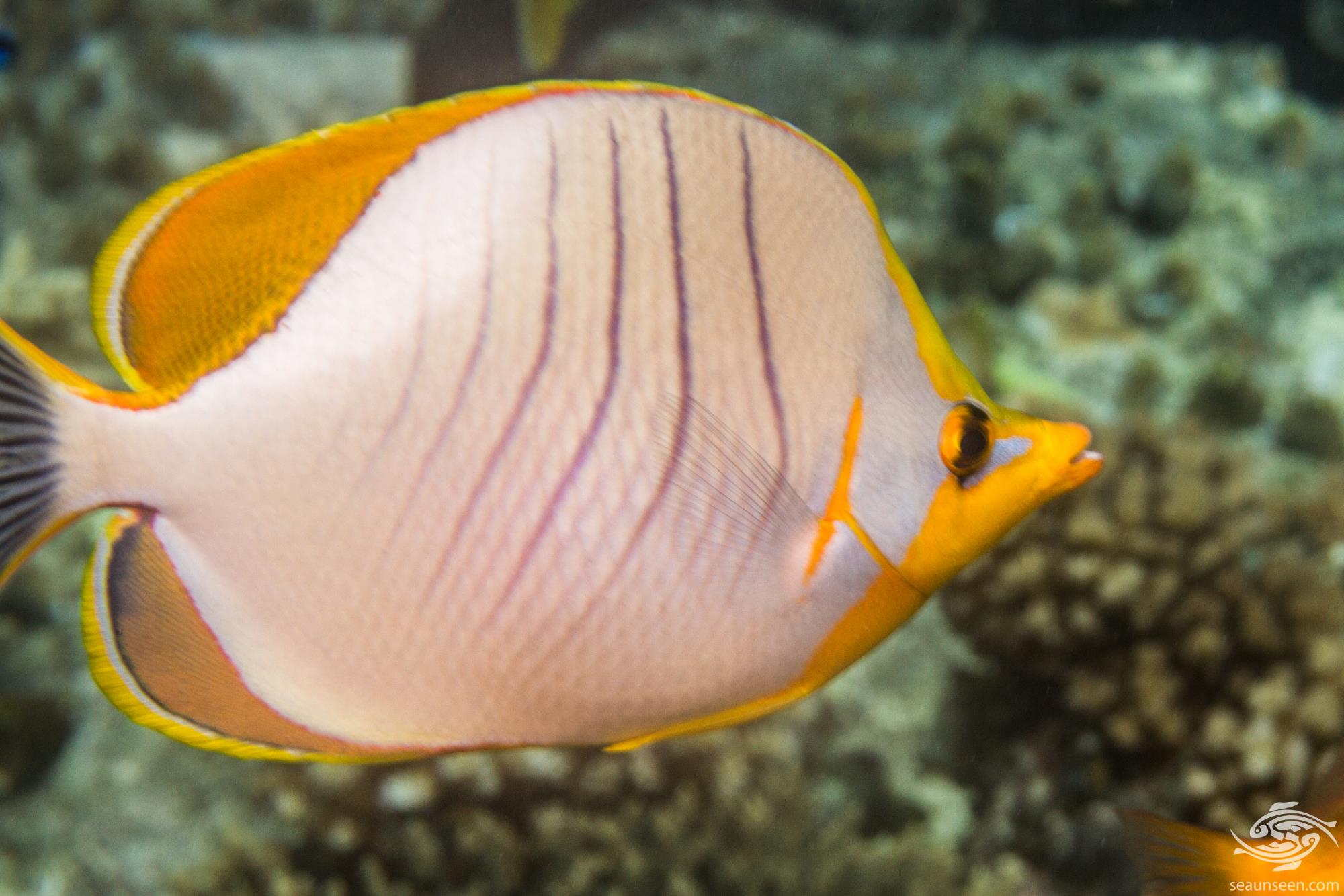 Little is known about the mating habits of the Yellowhead Butterflyfish. They are however often seen in pairs which may be monogamous.  As with most Butterflyfish, the female swells with eggs and spawning takes place by scattering into the water table with the male fertilizing the eggs.

Where their range overlaps with the Saddled Yellowhead Butterflyfish (Chaetodon ephippium)  hybrids are known in the wild. 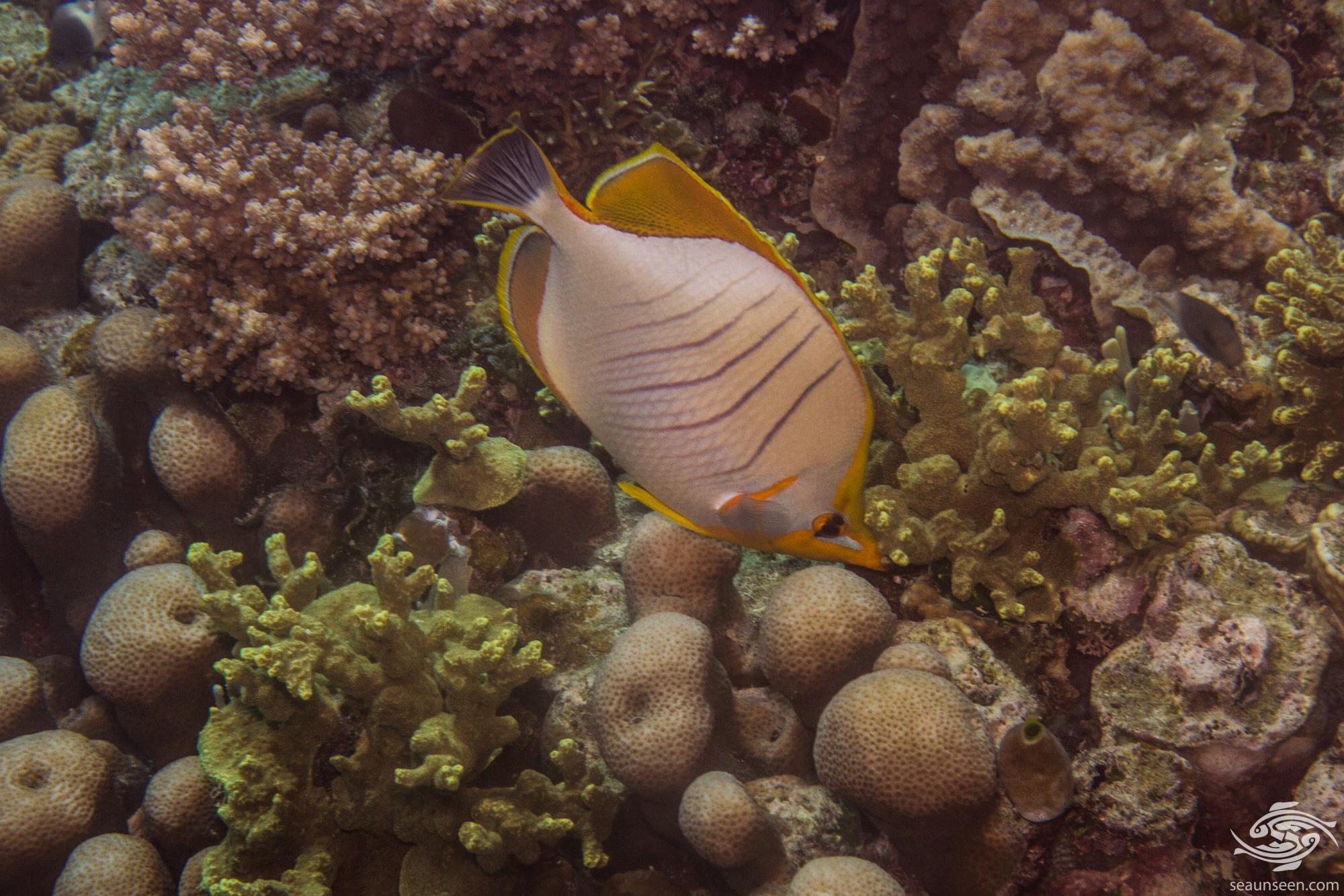 Yellowhead Butterflyfish are sometimes kept in aquariums but due to their habit of picking on coral are not that commonly kept. Their potential size of up to 20cm requires a fairly large aquarium. They are not reef safe. They will likely nibble on mollusks and tubeworms.