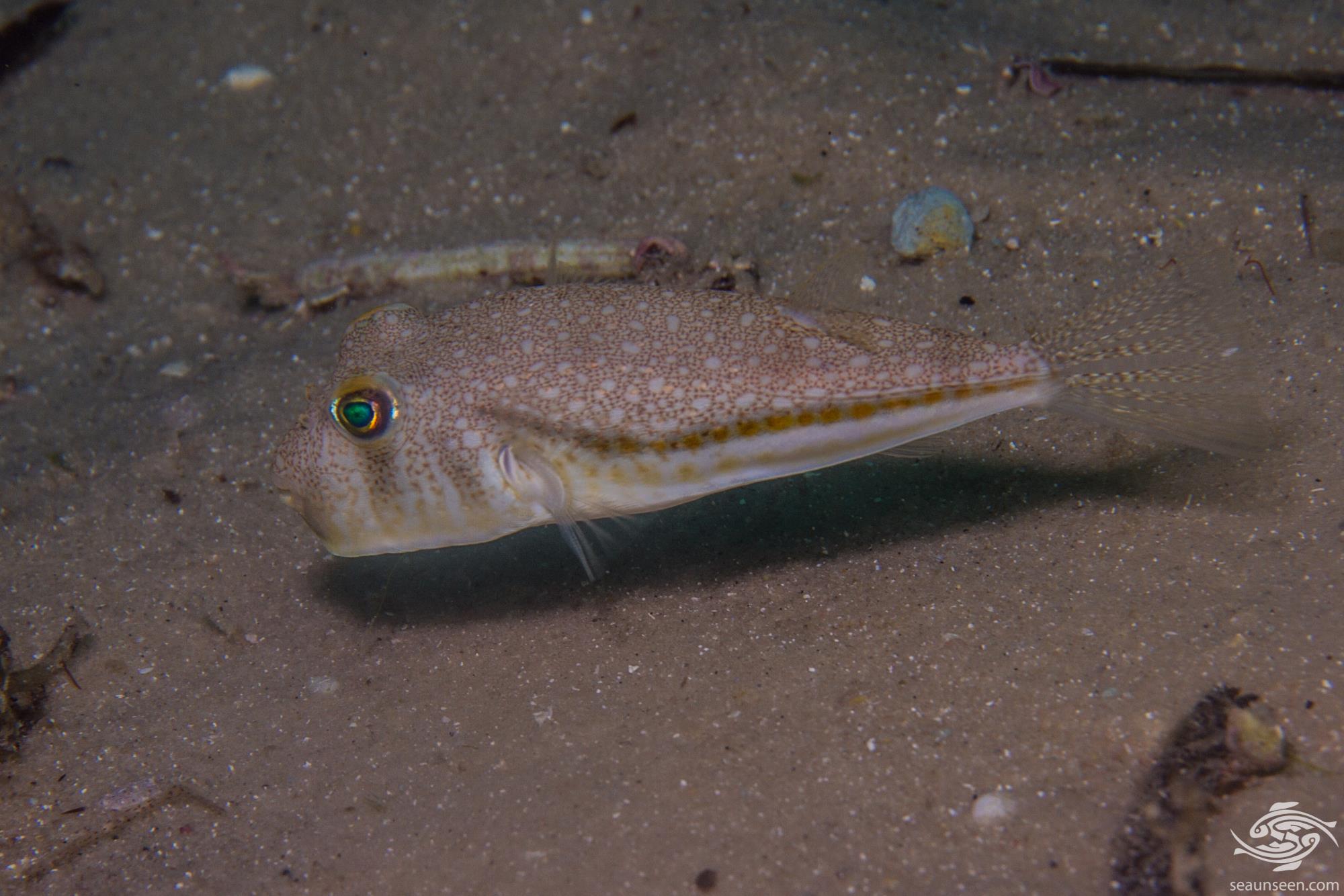 The Yellowspotted Pufferfish (Torquigener flavimaculosus) is also known as the Studded Pufferfish. As with many other puffers, they have a symbiotic relationship with types of bacteria such as Pseudoalteromonas tetraodonis. This bacteria produces tetradotoxin which is a powerful neurotoxin. These tetradoxin’s are found in their skin and internal organs. Tetradoxin is approximately 100 times more toxic than cyanide.

Research has indicated that female Yellowspotted Pufferfish carry more toxins than males and that they are more toxic in winter and least toxic in autumn.

Yellowspotted Pufferfish have a typical pufferfish shape with a rounded body and a short tail. They have no scales or lateral line and have a set of light brown protruding nostrils on the snout. The skin is thick and tough. The body background color is white with a series of small brown dots across the upper body and face which ring irregular shaped white markings.  Running along the rear edge of the upper body there are a series of yellow spots which give the fish its name.  A light brown stripe runs across these dots.

As with all the puffers they have four teeth that are fused into a beak giving them a powerful bite capable of crushing crustacean and other shells.  They have no pelvic fins and the fins are a semi translucent light brown color except for the caudal fin which has attractive brown and white marks on it.  The iris of their eyes is black and the eyes are ringed with brown.  They have the ability to move their eyes independently and have good vision.

Full grown they can grow up to 16 cm in length although usually they are slightly smaller. As with all pufferfish or blow fish as they are sometimes known, they have the ability to take water into their stomach to swell themselves up, making it harder for a predator to fit them in its mouth. They also have the ability to darken and lighten their colouration. On the open sand they are fairly well camouflaged and in lower visibility and light can be difficult to spot. 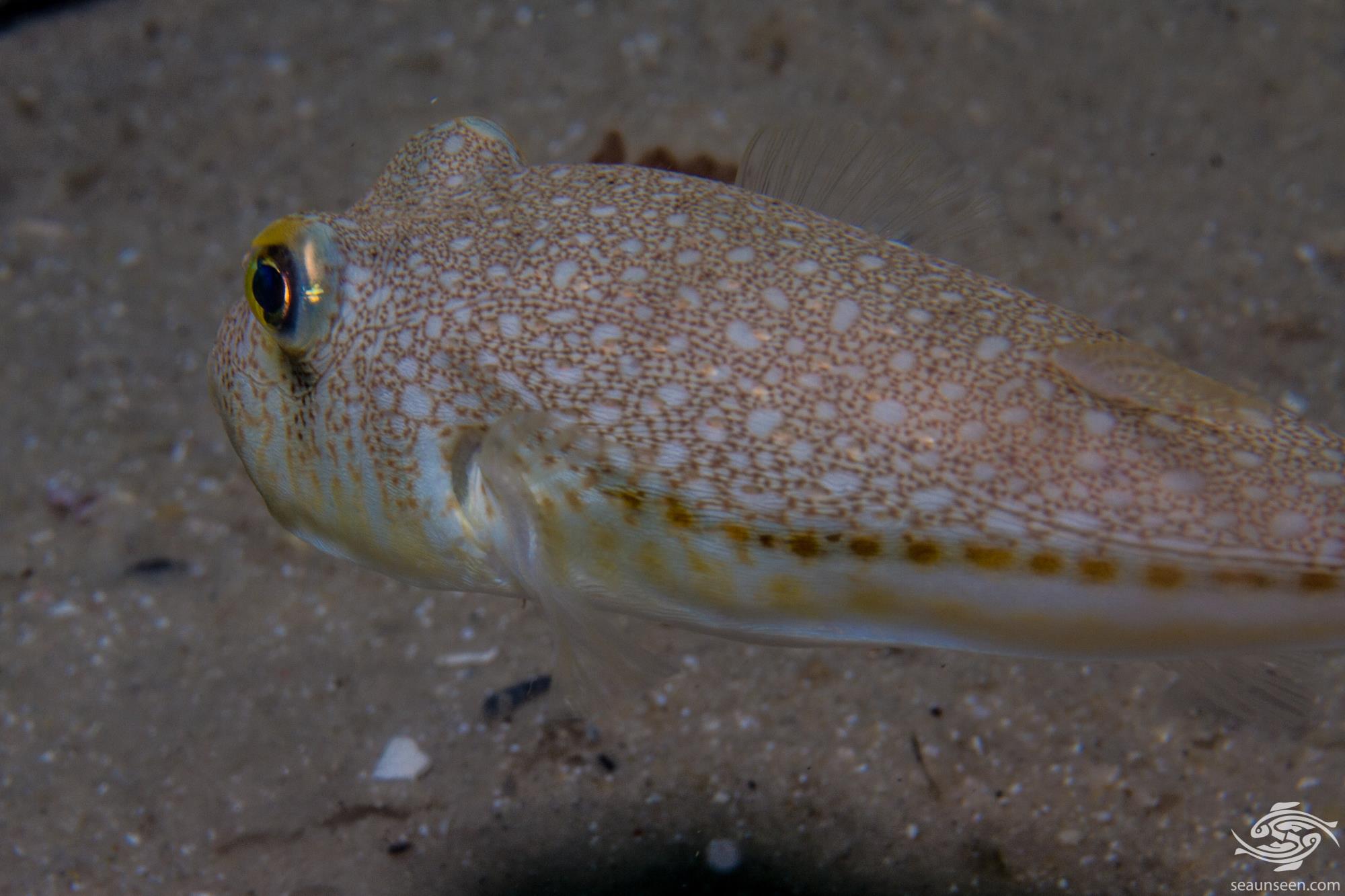 YELLOWSPOTTED PUFFERFISH IN THE WILD

Yellowspotted Pufferfish are usually seen on sandy bottoms with isolated rubble. During the day they are normally seen solitary over sand or seagrass.  If a diver nears them they will usually swim off at a slight angle allowing one of their eyes to point backwards to watch you. They have been known to burrow in the sand. They usually swim just above the substrate and are well camouflaged over sand. 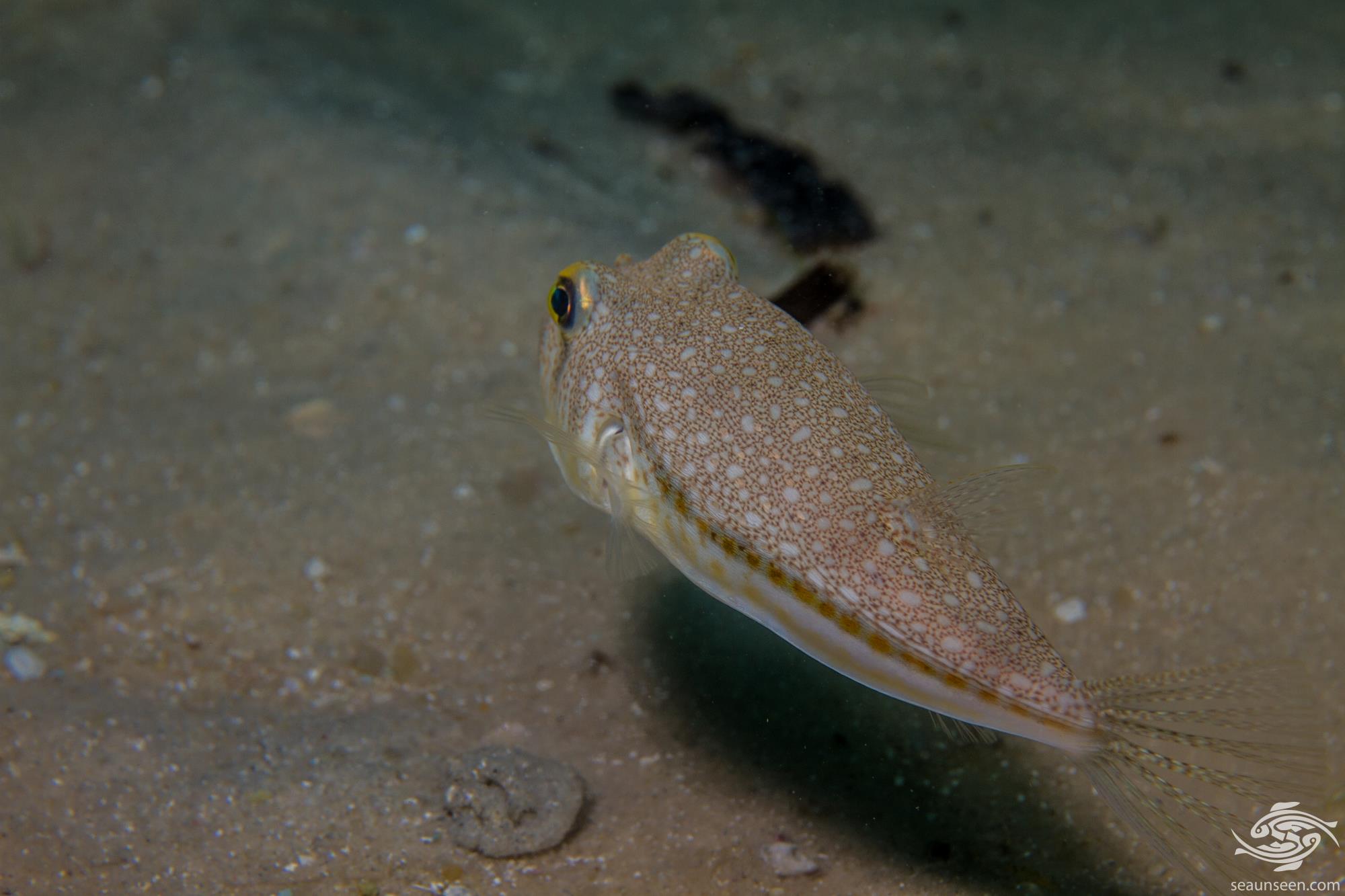 Yellowspotted Pufferfish were originally found only in the West Indian Ocean. From the East coast of Africa their traditional range extended up into the Red Sea and the Arabian Gulf, parts of Madagascar and in the Seychelles. They have now migrated up the Suez canal into the Medditeranean sea and have been recorded in Israel, Syria, Turkey and Greece in the Mediterranean. This is known as Lessepsian migration. They are found on sandy bottoms close to reef and in lagoons and sandy areas with seagrass to a depth of 60 meters. 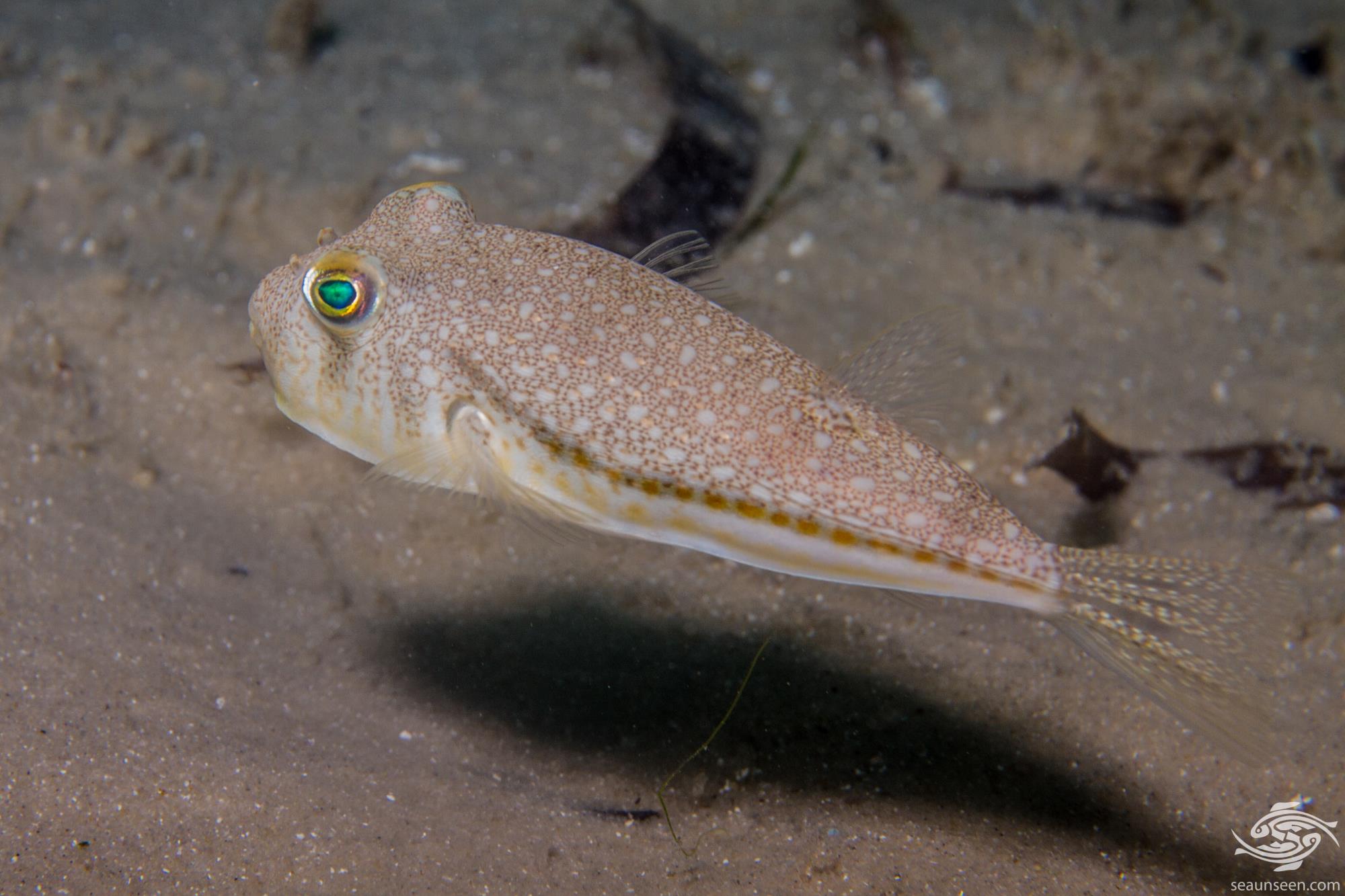 Yellowspotted Pufferfish have four teeth which are fused into a sharp edged beak and the teeth continue growing throughout their life. For their size they have a powerful bite. They feed on a variety of demersal invertebrates.

Little seems known of their breeding behavior , however in pufferfish mating is between two distinct individuals and the eggs are released by the female and fertilized by the male. These then drop into the sand and later hatch. The larvae are planktonic. Males of the Torquigener genus are known for building elaborate patterns in the sand to attract females for mating, but there seems little research done on the Yellowspotted pufferfish. 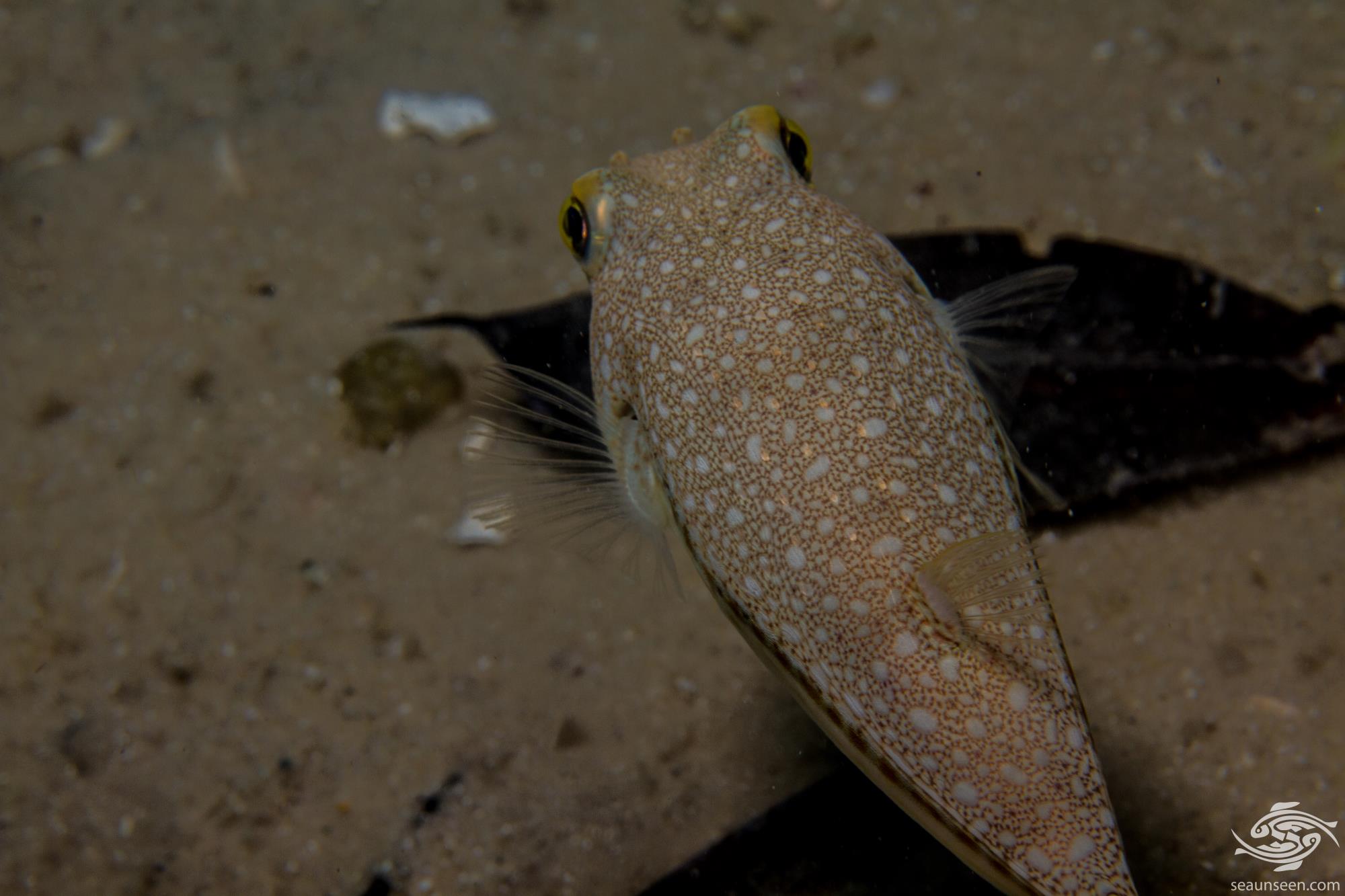 Yellowspotted Pufferfish have the ability to release toxins into the water and are not regularly kept by aquarists. Because of their constantly growing teeth, they would require regular feeds on hard shelled crustaceans to prevent the teeth from growing too far and becoming unusable. They are not aggressive fish, but may attempt to eat smaller sickly fishes and may nip long finned fishes. They will also eat most invertebrates and may damage corals.